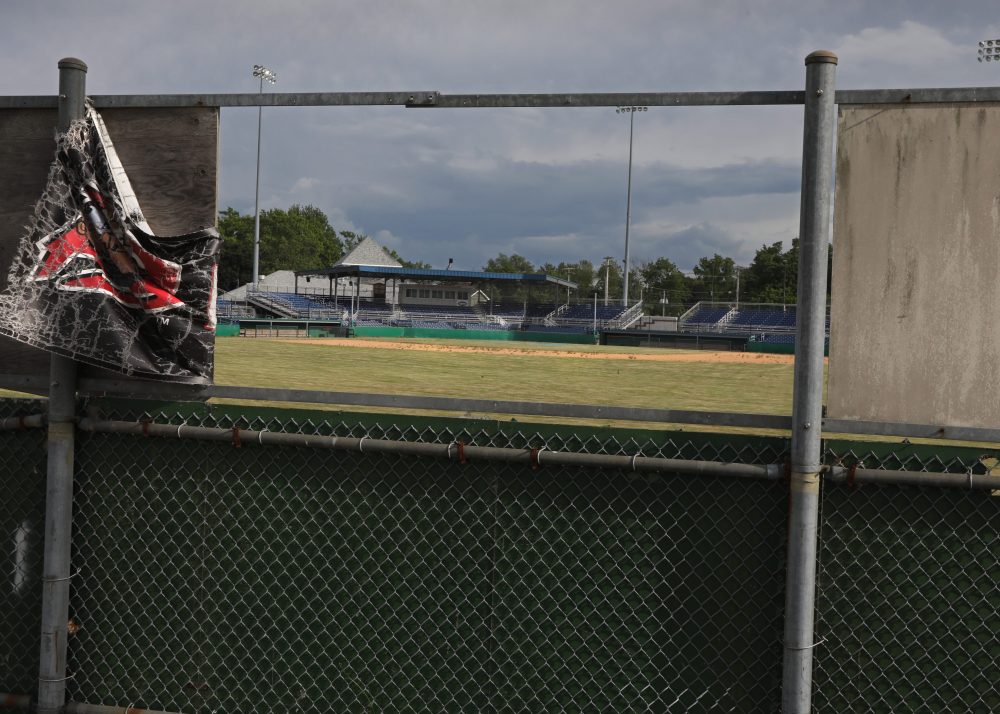 This article is brought to you by a partnership between Baseball Prospectus and the Pandemic Baseball Book Club, a collective of baseball authors focused on the principle of cooperation over competition. Check out their conversations about baseball books and much more at pbbclub.com, and on Twitter at @pandemicbaseba1

In ways both literal and figurative the New York-Penn League was born on Main St. and died on Park Ave. Conceived in 1939 in Batavia, New York’s Hotel Richmond (which sat, before demolition, on Main Street), it was the longest continuously operating Class A league left when it was among those low-rung circuits summarily executed by the Office of the Commissioner of Baseball, headquartered at 245 Park Ave, Manhattan.

The league kicked off with six teams: Batavia, Bradford, Hamilton, Jamestown, Niagara Falls, and Olean, towns dotting western New York, northern Pennsylvania, and southern Ontario, all within a hundred mile radius of the Batavia Clippers’ State Street Park. There were over 40 affiliated minor leagues at the time, and it was possible to dream up a low minors circuit in January and have it begin play in May. Initially designated the PONY League, a name achieved by stringing together the jurisdictions of its founding clubs, it was a Class D outfit, its teams playing over 100 games apiece strung between Memorial Day and Labor Day. The Olean (NY) Oilers were its first champions.

Thanks to the size of the towns it represented its typical crowds, fewer than a thousand fans a game, qualified as broad community support. The PONY survived WWII without an interruption in its schedule, unlike the vast majority of minor leagues. It expanded to eight teams in 1942 before contracting back to six in ’43 and slingshotting back up to eight in ’44, which gives a sense of the provisional, ad hoc, slapdash nature of both mid-century minor league baseball and life during wartime.

It’s important to call it what it was: a low minor league, a place its players couldn’t wait to escape on their upward climb toward the big prize. The ballparks were small and cramped, the travel always by bus, the pay low. Its member clubs came, went, resurfaced, changed names and affiliations regularly. But at Damaschke Field in Oneonta, with its tiny grandstand and Catskill backdrop, and Tullar Field in Wellsville, amid the rolling green Enchanted Mountains, and beneath the high steel trusses of the grandstand roof at Donovan Stadium in Utica, on warm summer nights and hot afternoons, the fans didn’t mind lingering.

My father, for one. He grew up in Hamilton and it was there that he saw his first organized baseball. In 1950 Ken Boyer, later NL MVP, played 80 games for the Hamilton Cardinals, the most distant outpost in St. Louis’ system. The Cardinals’ brass liked Boyer as a pitcher, but in a pinch they put him in the field where he wound up providing sparkling defense, his strong arm slinging sure throws across the diamond. He also hit: a .342 average with a bit of pop (9 HR, 61 RBI). Dad saw him there, hoovering up everything hit to the left side, and he never forgot it.

But the team, by then called the Red Wings, folded partway through the 1956 season, affording my father the opportunity to learn a lesson in impermanence and loss that only a minor league baseball team can teach. The PONY, having lost its ‘O,’ changed its name to the New York-Penn League in 1957, the name it would retain until its recent demise, no matter how far afield its teams were based. And they did roam: Connecticut, Massachusetts, Maryland, New Jersey, Ohio, Ontario (Hamilton again, St. Catherines, Welland), West Virginia, and Vermont.

Another lesson: baseball’s lifeblood isn’t stillness, it’s continuity. Vigorous change is the only true constant in the minors. The New York-Penn League’s existence spanned eras; it was steady, but not static. In 1961, Gene Baker was hired to manage Batavia, the first African-American manager of a professional, non-Negro League club. Minor League Baseball had undergone a gonzo heyday during the immediate postwar period (there were 59 leagues spread across all levels in 1949), before television took some of the air out of its tires. Ahead of the 1963 season, after years of involuntary attrition, it undertook a rigorous process of downsizing and reclassification. Classes B, C, and D were eliminated, and in their stead there remained AAA, AA, A, and the new Rookie level, a replacement for all sub-A designations. The NY-Penn survived that cull and became a class A league. In 1966, A ball was subdivided into regular- and short-season leagues, with the NYPL becoming the latter in 1967, its campaign beginning in late June, thus becoming the first pro ball landing spot for many players taken in the June draft.

The league chugged along, teams came and left, a few players found their way to the bigs, but for every Warren Spahn (1940 Bradford Bees) or Dick Allen (1960 Elmira Pioneers), there were a hundred or a thousand names you’ve never heard.

League attendance swelled during the ’90s, and as a new millennium dawned it expanded into larger centers: Brooklyn, Staten Island, suburban Baltimore, and the New York State capital area. From its beginnings as a six-team circuit, it eventually ballooned to fourteen clubs.

This would’ve been right around when I first enjoyed a New York-Penn game in Burlington, Vermont. The Vermont Expos began play in 1994 at beautiful Centennial Field (built 1912), on the campus of the University of Vermont, and incubated several future Montreal Expos before the latter moved to Washington in 2005. In ’06 the Vermont Expos changed their name to the Lake Monsters. My wife and I were lucky enough to see them a few times under both names, and never had anything less than a great time, wedged into wood-and-iron seats nearly a century old, beneath the grandstand’s sheltering overhang.

I also got to take my father to a game in Auburn, New York, hustling him off to lovely Falcon Park one June evening to celebrate his birthday. The Doubledays were a Toronto affiliate then, and we saw Aaron Hill on his way up the organizational ladder. In the middle innings the hot summer sky clouded over and cracked open, but we waited until the thunder passed and the rain eased off, and were eventually treated to 4th of July fireworks.

The Brooklyn Cyclones won the league championship in 2019, beating the Lowell Spinners two games to one, with no way of knowing that they would prove to be the New York-Penn League’s final titlists. There was, of course, no minor league baseball in 2020, but there were losses: word trickled out that when Major League Baseball renegotiated its agreement with Minor League Baseball, it would insist that the system be pared back by 42 teams. In time dealings stalled, MLB imposed its will unilaterally, and when the new alignments were announced earlier this year, the New York-Penn League had been eliminated, along with other leagues, like the Pioneer and the Appalachian.

Most of the teams affected will live on in some form; three NYPL clubs (Aberdeen, Hudson Valley, and Brooklyn) were moved up to the new High A level, for example. The majority of the others will persist as independent teams, or college wood bat squads, as with the Lake Monsters, now of the Futures Collegiate Baseball League. It’s all still very confusing, but if you want the specifics, they’re floating out there.

I concede the overhaul’s necessity. I’ve sat in those ballparks, my knees jammed into my chin, and watched players in oft-repaired hand-me-down uniforms strike out, and then jog back to dugouts packed tight with young men and coaches, their capacities stretched by lining folding chairs down along the wall in foul territory. Often, the very thing which made attending those games so wonderful for me—tiny old ballparks tucked away on leafy residential streets, lacking amenities and luxuries—made the minor league experience more uncomfortable for the players. These were not ideal circumstances in which to foster young athletes, and the system had clearly become burdened by bloat, rot, rust, and less than advantageous agreements. MLB guards nothing so zealously as it does its investments, and this is simply a reflection of that.

But recognizing the practicality of a thing doesn’t preclude lamenting the emotional sting it delivers.

This is a disruption in the game’s history, as close to a schism as I can imagine, a true Before and After moment. That it happened effectively under cover of darkness, without sufficient warning to allow us to recognize and celebrate the things we were seeing for the last time, only reinforces the hamfistedness with which MLB is capable of operating. In its ongoing quest to achieve maximum market efficiency, the league failed spectacularly at the very simple task of reading the room.

Baseball lurches on, continuous insofar as it is still played, and indeed will still be on offer should you choose it as your evening’s entertainment in dozens of smaller cities all across America. But the New York-Penn League is no more, wiped out suddenly, its records and history, its lore, and the very peculiar feel of it voted down and line-itemed out of existence. I didn’t expect it to last forever, mind you, but it would have been nice to have had a chance to say goodbye.

You need to be logged in to comment. Login or Subscribe
David Crane
Great piece, Andrew. My experience with the NYPL was exclusively at Waconah Park, Pittsfield, MA. At various times affiliated with the Sox (Bill Lee was called up to Fenway from there), the Cubs (saw Turk Wendell pitch), and the Mets (Isringhausen as a puppy). Fondest memory is walking up the ramp to the field, pre-game. The quality of play at that level varied wildly - from first taste of pro ball to hangers on for dear life - such that you never quite knew what to expect. On this night, however, the pitcher warming up for the Mets was POPPING the catcher's mitt, and by the time we got to the fence behind home, there was this lanky kid with a beautiful motion and undeniable charisma. Dominated that night, and I kept track (Metsian freak that I am). Besieged by arm woes, never made it out of A-ball. But I'll never forget that sound. Kirk Presley, Elvis's 3rd cousin.
- David Crane