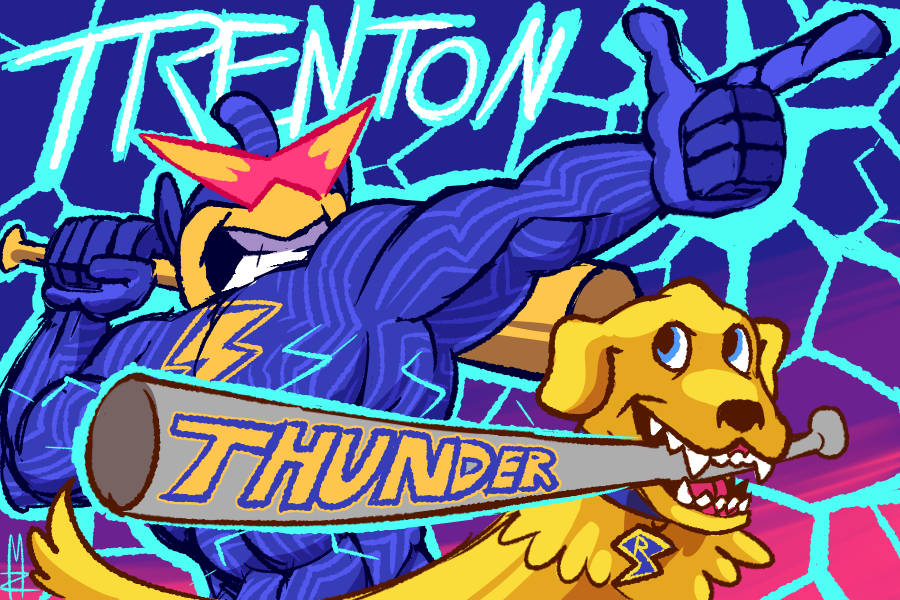 Too Far From Town shines a light on the 42 minor league baseball teams that lost their major league baseball affiliations. The Trenton Thunder were a Double-A New York Yankees affiliate. They will continue as a member of the MLB Draft League, a collegiate summer baseball league. You can read previous installments of the series here.

I would guess more than half of the American population does not know that Trenton is the state capital of New Jersey. Only trivia buffs seem to know Trenton was once the capital of the entire country, albeit for a brief time. Even fewer individuals are aware that Trenton was the home of some milestone moments in Black baseball history. Or at least, used to be.

I’ll get to that history in a minute or two, and then the Trenton Thunder batdogs of course, I promise. But first we have to get into the reason why the New York Yankees bailed on Trenton as the home of their Double-A affiliate for Bridgewater Township, New Jersey, where the Somerset Patriots play. The Thunder are one of only two Double-A teams that lost their MLB affiliation , and as far as I know the only one whose owner accused a MLB franchise of being racist.

“While this community built the Yankees organization up and set minor league baseball attendance records, it seems the Yankees were only focused on trying to cut culturally diverse Trenton down in favor of a wealthy, higher socioeconomic area in Somerset.

“When someone is disingenuous enough to make the statement that the Yankees made back in the George Floyd days that we’re all for Black Lives Matter, we’re all for community involvement and diversity, what they do is instead of doubling down on Trenton — which would have been a great manifestation of their heart and belief in what they say — they abandon it and they make the facilities or where the players live and the cost of living into the issue.

The 2019 U.S. Census had Trenton with a 49.5 percent Black or African American population and a 30.8 percent Hispanic or Latino count, while Somerset County was 68.1 percent white, 10.5 percent Black and 15.2 percent Hispanic/Latino. The Yankees cited issues with Arm &Hammer Park’s low clubhouse ceiling and some other stadium issues as the reason (which Plumeri said the team was willing to fix) and did not choose to comment on what Plumeri said.

Now to look much deeper into the past: 19-year old Willie Mays, listed as a 5’11”, 170 pound “long ball hitter”, made his professional baseball debut as a member of the Trenton Giants on June 24, 1950 in Hagerstown, Maryland. His first home pro debut was in Trenton two days later against the York White Roses. He went 2 for 3, both singles, in front of 1,231 fans in a 4-3 victory. Three of his five catches from center field were considered “remarkable”, a big help to Giants starter George “Red” McCaff that’s for sure.

That previous paragraph was all true until last December, when Major League Baseball announced their “elevation” of the Negro Leagues from 1920-1948 to professional status. Now, Mays’ pro debut was with the Birmingham Black Barons in 1948 in the second game of a doubleheader against the Cleveland Buckeyes.

This literal rewriting of history isn’t bad if you’re, say, Birmingham, Alabama, or Willie Mays, who gets a bonus home run added to his lifetime total out of the deal. But for the second time in as many months to finish 2020, Major League Baseball screwed over Trenton, New Jersey.

What neither the league nor the Yankees could take away from Trenton is the Cuban Giants.

The first salaried Black baseball team, the Cuban Giants started out as the Argyle Hotel Athletics in 1885, based in Long Island, New York. They were renamed the Cuban Giants because either a) the team occasionally played in Cuba and/or b)spoke pidgin English to pretend they were Cuban, thinking people would feel more comfortable if they thought the players were from another country instead of American, but Black.

The team was bought by Walter E. Simpson. Simpson moved the club to Trenton, where they played their home games at Chambersburg Grounds. It was there on July 21, 1886 when the Cuban Giants had a then rare opportunity to play a pro squad.

The Cincinnati Red Stockings of the American Association traveled to Trenton to play an exhibition, as a way to pass the time between a series in Philadelphia and Baltimore. They must have regretted the decision, losing to the Cubans by the score of 9-4. Shepard “Shep” Trusty got the win for the Cuban Giants. He helped his own cause when he led off the third with a walk, starting a five-run inning. The next day, the Cincinnati Commercial Tribune reported they did not have any clue as to what happened the day before, and for all they know the game might not have been played at all. The Trenton Times therefore had a big scoop when they reported all about the contest, under the headline “A Glorious Victory.”

The Giants joined the New York Gorhams as the two Black teams in the 13-team integrated Middle States League in 1889. While the Gorhams only played for two months, the Giants hung around for the entire season and finished 57-16, giving them the highest winning percentage. But the Middle States League threw out a couple of their victories for unknown reasons. Then they declared the Harrisburg Ponies as the victors. Maybe it was because the Ponies sold their own victory cigars. Maybe it was because the Cuban Giants corrupted the minds of Sunday schoolers in Harrisburg, Pennsylvania. 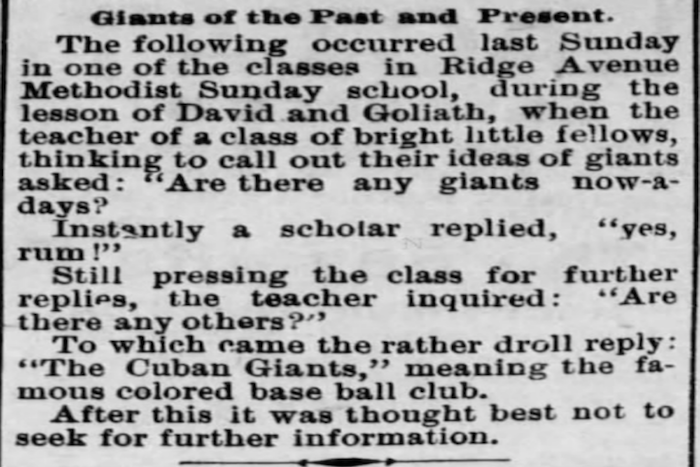 The Harrisburg Telegraph insisted the Giants “flagrantly disregarded” the league schedule all year and should be kicked out. If I were the Cuban Giants and read this, I would have pointed out the Middle States League only had teams from the Northeast United States, so how the hell am I supposed to find my way around this stupid association anyway?

Anyway, I’m thinking your guess as to why some wins were taken away from the Cuban Giants is both as good as mine and exactly the same. No matter the real reason, it is yet another example of a Trenton baseball team having something taken away from them.

or practicing to fetch bats https://t.co/6B0DpcvQwV

First there was Chase. The Golden Retriever began his tenure as the Trenton Thunder batdog in 2002. Then Chase’s son Derby entered the family business in 2008 and worked along with his old man, until 2013 when Chase died of leukemia. Derby passed away in 2018. His son Rookie was working the Thunder game the night the team honored Derby. For 2021, Rookie will be joined by a pup named Dash.

It snowed again yesterday. Dash and I had so much fun running around and rolling in the snow. The most fun is catching snowflakes in our mouths. pic.twitter.com/42YCNVj7lt

A funny thing about dogs is they can only see in combinations of two colors: blue and yellow. They’re technically color-blind.

You need to be logged in to comment. Login or Subscribe
pocketsrj
TY for the article!
Reply to pocketsrj
Roger Cormier
TY for reading!
Reply to Roger
marcc856
Nice article. I fondly recall my family driving from South Jersey to watch the Trenton Thunder when Nomar Garciapara was an upcoming prospect
Reply to marcc856
Roger Cormier
Thanks! I remember that Nomar fellow.
Reply to Roger