In a recent post at my blog on Mark Cuban’s interest in buying the Cubs, this comment caught my attention:

But the bottom line is that it would be refreshing if the next potential owner of a given team does not turn out to be another Selig “appointee”…(can you say Marlins, Red Sox, Expos, Nationals, not to mention he’s championing his own candidate for Cub ownership.)

This started me thinking about all the power the commissioner now possesses. It’s interesting that Fay Vincent’s firing came about because he stepped into labor negotiations and tried to force realignment on the National League. Yet the owners gave Selig the power to “negotiate the clubs’ labor strategy,” and allowed him to realign the majors. Selig runs both leagues, having taken over control of the umpires and of disciplining players from separate league offices. Rather than serving as a spokesperson for the game and the final arbiter of difficult decisions, the commissioner acts as the CEO of Major League Baseball, Inc.

As fans, is that the job description we want for the commissioner? My position remains that the commissioner should be a disinterested person. After all, over the years commissioners needed to discipline both players and owners. Why not a commissioner who is outside and above the entities of Major League Baseball? Right now, there are two people serving that role:

Donald Fehr, the executive director of the Players Association, like Marvin Miller, his predecessor, in reality, was the commissioner of the players.

Can we get to one commissioner, to which both the CEO of Major League Baseball and the head of the Players Association answer? Baseball isn’t just the owners. They supply the capital and the long-term planning that makes the game possible. Baseball isn’t just players, either. Without these athletes, there would be no game. Neither of these groups earn the millions they do without the support of the fans. The commissioner sits on a three-legged chair, and normally he needs the support and respect of all parties to stay in the job.

Mr. Venn provides a graphical view of the structure as I’d like to see it: 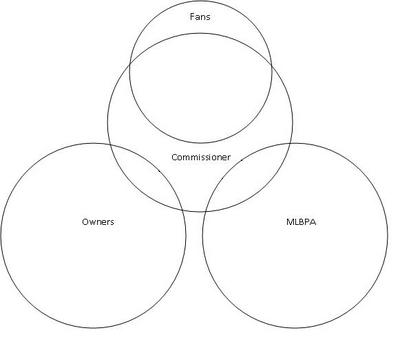 At the top are the fans, the people who make the sport possible. The commissioner is their representative, their spokesperson. Most of the person’s time should be spent speaking with these constituents, at the ball game, at fan fests, on TV and radio, through an interactive Web site, and using whatever other forms of communication emerge over the years. In turn, the commissioner sits above the owners (MLB Inc.) and the MLBPA. His interactions with them, however, are few. He communicates to them the pulse of the fans. He metes out discipline to both sides. And while he should do his best to stay out of labor negotiations, he certainly can act as a mediator, and a balancing force if one side is trying something unfair (like collusion).

What makes my concern on this front especially relevant is that in two years Selig’s term expires, and Major League Baseball will have to begin looking for a new commissioner before then. If MLB were to adopt a structure like the one above, they would need to implement a number of changes. The first concerns the compensation of the commissioner. If this person reigns over both MLB and the union, he or she should be paid by both. (In reality, the fans pay the commissioner’s salary. This just takes some money out of the players’ paychecks.) This way, the commissioner is no longer in thrall to the owners.

Secondly, everyone receives a say in who becomes commissioner. The owners decide on three or four candidates acceptable to them. The players decide on three or four candidates acceptable to their side. Then 91 ballots are cast, each ranking the candidates one to X (X being the number of candidates on the ballot). The votes are tallied using a Borda count. (The MVP and Cy Young voting are variations on the Borda count.) Borda counts are very good at picking a consensus choice where there are many candidates, and where no clear-cut first choice exists.

But where do the 91 ballots come from? Each owner fills out one ballot–one man, one ballot. This reflects the fact that the owners hold the biggest investment in the game. They’ll be dealing with the commissioner the most directly of any of the groups.

Each 40-man roster gets one vote. The players get together and rank the candidates as a group. How they do it doesn’t really matter, but a Borda count election among the players on the roster would be consistent with the rest of the voting. The results of that election becomes the ranking for the team ballot.

The final 31 ballots come from the fans. Each person designates a team for which they root, or whether they consider themselves a fan of the game as a whole (someone who doesn’t have a strong fan allegiance to a single team). Each fan ranks the candidates, and like the players, the votes for each group of fans are tallied into a single ballot. The final 91 ballots are tallied, and result is a new commissioner, paid for by the owners and players, but owing his or her election to the fans.

The owner’s ballots in such a scheme are likely to favor the slate of candidates they put forward. The players are likely to do the same with their slate. It’s the fans who would cast the deciding vote. Of course, for the voting system to work, everyone casting ballots need to know the candidates. Instead of back room searches and votes, the interviews of the contenders go on-line. People vying for the post make themselves available to the media to get their message out. Sites like BP or blogs endorse and criticize candidates. Commercials for and against appear in online video services. In other words, everyone gets involved in the process.

The particularly great thing about this is that while the candidates come from one of two camps, it’s in each candidate’s best interest to try to appeal to all three parties. Someone selected by the owners, if winning is the goal, wants to explain to the players and the fans why his or her candidacy helps them. Someone seen as just the players’ candidate or the owners’ champion likely loses. The result is a commissioner for everyone.

With the end of the Bud Selig era approaching, the time is ripe for redefining the commissioner’s role and selection in the game. Selig created a position more business-oriented than I believe the commissioner should be. That position should remain as CEO of MLB, dealing with the business aspects of the game, including negotiating with the union. Watching over this group and the Players Association would be a commissioner, paid by both, to keep both groups moving in the direction of the best interests of baseball. Paid for by both sides, and elected with the consent of the fans, we can finally have a commissioner that we all trust and respect.