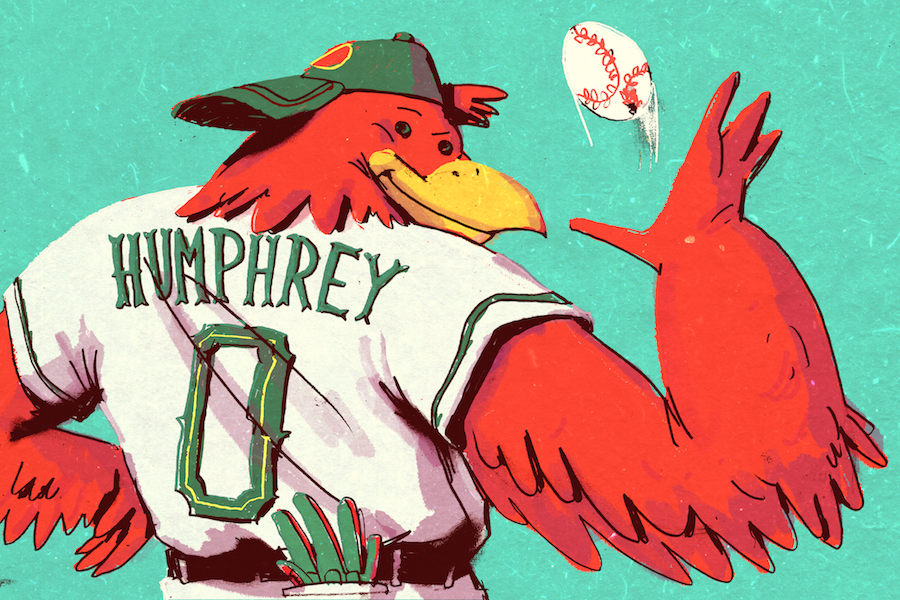 Too Far From Town shines a light on the 42 minor league baseball teams that lost their major league baseball affiliations. The Boise Hawks were a Class-A Short-Season Colorado Rockies affiliate. They will continue as an independent team in the Pioneer League, now a MLB “partner league.” You can read previous installments of the series here.

The idea of independence has positive connotations. Boise, Idaho baseball history laughs at your connotations.

Every league title brought home to the City of Trees by way of the Boise Hawks were with Angels and Cubs youths.

The 1904 Boise Fruit Pickers of the Pacific National League finished in first place, you insist. There was no championship series to prove their autumn mettle, I counter.

The Boise Pilots, one of the inaugural Pioneer League squads, lost the league finals in 1940, 1941, and 1942. It was only when they teamed up with the Milwaukee National League club during the fifties and sixties when they got over the hump and won three finals — twice with Bob Uecker of all people.

The Boise Irrigators won the second half of the 1913 Western Tri-State League season. They were supposed to face off against the first half champion Walla Walla Bears and decide an ultimate victor, but it never happened. Disinterest from Walla Walla fans was one excuse. The club directors not agreeing to terms was another. Team owners squabbling over hotel and transportation bills one month after the season was over could not have helped, nor was Boise’s obvious desire to join the more profitable Union Association. I hear though there were no hard feelings. 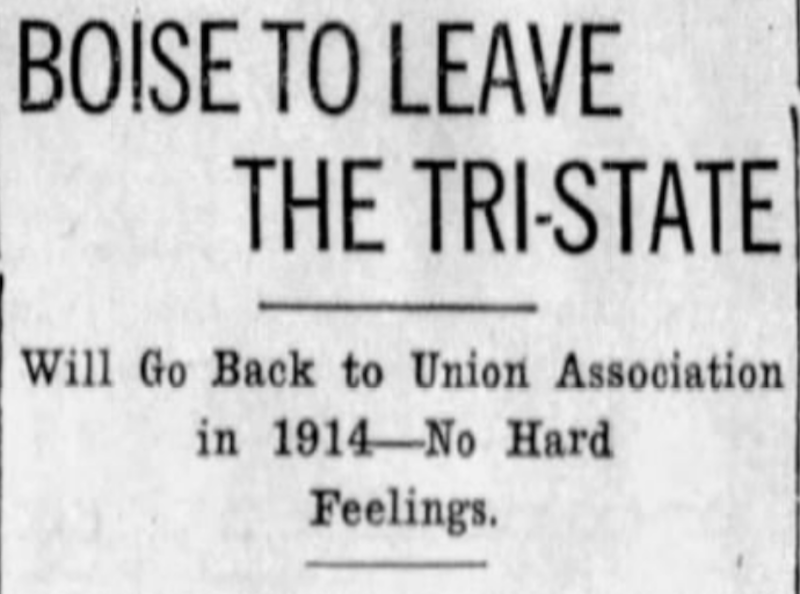 The Irrigators disbanded the following July.

Boise was again left to their own devices in 1978. They called themselves the Buckskins. Their president and general manager was Lanny Moss, the woman best known as the GM of the fiercely indie Portland Mavericks owned by Kurt Russell’s father. Moss was awarded an expansion franchise and developed a unique player sponsorship deal. Players who impressed during tryouts were offered a contract, provided they could scrape together $3,000 themselves or from some other individual or business. If the player got released or hurt himself, a prorated refund would be given. If a player was sold to a MLB organization, the sponsor would get 75 percent of the payment.

The system was not how the team got a few paragraphs in Sports Illustrated that July. 27-year-old manager Gerry Craft released a pitcher-infielder named Brad Kramer, nephew of Green Bay Packers legend Jerry Kramer, because God told him to. “We feel that Christ is just setting the stage for a big boom,” Craft, a born again Christian, said of himself and Moss. “He’s just testing us right now.” They were on an 11-game losing streak.

The Sporting News also took an interest in Craft and the team around this time, and got Kramer’s side of the story. Kramer claimed his dismissal had nothing to do with God but with a “big personality conflict” between himself and Craft, and the manager didn’t choose which players would stick around based on what God told him; he simply kept his personal friends, regardless of their skill set compared to the players he wasn’t close to. The team kept losing and getting heckled by fans about Craft’s admission God helped him manage games and his roster. Moss went from defending Craft, wondering out loud why they were “the bad guys” because they admitted to prayer, to deciding “to clear the air and get off this religious thing”. Craft read from a prepared statement which said Kramer was sort of right. Kramer had a poor attitude since Spring Training, broke curfew the night before his release, and put down his teammates.

Kramer signed up with the Grays Harbor Loggers. The first time he faced his old team he went 1 for 5 and gave up a home run in two innings of relief. The Loggers lost 13-1.

The next day, he toed the rubber in the 9th inning and gave up two bases-loaded walks to tie it. Then Gerry Craft himself sauntered up to the plate. Gerry recorded 18 hits in 74 plate appearances that season. One of those hits did not come in that at-bat against Kramer.

The team finished 23-49, 8th out of eight teams in the Northwest League, although, possibly more important to Lanny Moss, they placed 4th out of eight in attendance. Craft was sent packing because Moss wanted to give the Buckskins “a new image.” The team folded that winter, before that new image could manifest itself.

Pro baseball didn’t return to Boise until 1987, when the Hawks were born. A minor league Zelig-type character named Mal Fichman was the GM. Seven years earlier he managed the Rocky Mount Pines to a 24-114 record. One player said the highlight of the season was when the bus broke down in front of a massage parlor.

Fichman brought in the recently retired former Dodger Derrel Thomas to manage. The hiring raised eyebrows. Thomas himself once said he was labeled a “troublemaker”. An infamous story from the time he played for the San Francisco Giants had Thomas leaving Candlestick Park during a game to wash his car in the parking lot. He pointed out the year after it supposedly happened that he was on the DL during the incident, was only washing the windshield, and his two white teammates were with him yet were never mentioned in the story. To this day the urban legend without Thomas’ rebuttal persists.

History was made on June 27th when Thomas and the Hawks faced skipper Mel Roberts and his Bend Bucks. It was the first time Black managers faced one another in a professional regular season baseball game that was not in the Negro Leagues.

Thomas was fired exactly one month later. The Hawks were 9-27. It made news, unlike the game against Mel Roberts, because he was the first Black manager fired after longtime Dodgers executive Al Campanis said on Nightline that Black people did not possess “the necessities” to manage.

“I guess it’s like Al Campanis said,” Thomas said after his dismissal. “Maybe I was the type of person he was talking about.” A week before, Thomas said he was surprised by Campanis’ comments because Campanis never showed any bigotry towards him.

“In the last couple of weeks, there have been some unusual strategic moves in the club,” Fichman explained of the firing. “You know, Derrel Thomas is an intelligent, fun-loving guy. In the past few weeks, that has disappeared.” Fichman also said it was a hard decision and he hoped him and Thomas remained friends. Fichman ended up hiring Thomas again, in 1991 as the Reno Silver Sox hitting coach, but Thomas changed his mind and returned to Los Angeles before their first game. The following year, Thomas was the baseball coach at Dorsey High School in L.A. when he was arrested for trying to buy 22 pounds of cocaine. Fortunately, it seems that Thomas has gotten his life back on track. Throughout the past decade, Thomas and former Dodgers teammate Rudy Law have led free baseball clinics at the Kiwanis Club in Palm Springs.

Fichman replaced Thomas in 1987 with himself. He was still managing the Hawks on June 29, 1989 against the Salem Dodgers when his mild-mannered second baseman Paul Cluff was ejected for debating a play at first.

“Well, the umpire at first base wasn’t very tall,” the man once referred to as “Mal Function” remembered about the 6th inning incident. “And I went out to him and said that I knew Cluff wouldn’t say anything bad. Cluff told me that he was safe. The umpire told me that Cluff said he was safe and that if he [the umpire] were a little taller, he might have seen the play. Well, it struck me and I said maybe he’s right. So he threw me out of the game. I’m 5-foot-7, but this guy was only about 5 feet tall.”

Fichman spotted the offensive lineman on the Boise State football team working as the mascot Humphrey the Hawk under the stands taking a breather.

“Are you done for the night? Fichman asked.

Fichman put on the costume and walked onto the field. This was already strange since Humphrey’s domain tended to be the stands. With Hawks on first and second in the 8th inning, Mal couldn’t help himself. He walked over towards the interim manager in the dugout and instructed him to call for a bunt. That was definitely stranger and more conspicuous.

One of three things happened next:

The next year brought about a new decade and Troy Percival, Garret Anderson, and other Angels prospects to the Boise Hawks roster.

You need to be logged in to comment. Login or Subscribe
Kristoffer Ericson
Mal Fichman!! I remember him from my early 90's Erie Sailors teams! The 94 team won the Frontier League. Man those were good times...
Reply to Kristoffer
NJTomatoes
At the time of the Hawk incident the team's colors were basic black/navy blue and white. The artist's rendition captures Humphrey in a much more complimentary light than was in place at the time and reflects the team colors from a later era. The Humphrey at the time of Mal's mascot malfeasance had much less impressive plumage.
Reply to NJTomatoes