The All-Star Game first made its way to nighttime television in 1967. In the first 15 years of the broadcast, the game was a ratings juggernaut–from 1967 to 1982, the stars consistently pulled a rating around 25, meaning one quarter of households with televisions watched the game. Of the televisions on in that time frame, the share was steady in the mid-40s, sometimes as high as 50. Since 1982, however, ratings and shares have steadily declined. Why did the decline happen, and what can be done to raise them again?

The data comes via Baseball Almanac. The following graph shows ratings and shares from 1967 to 2006:

Note two outliers in this series. In 1969, rain postponed the game on Tuesday night, so it was played Wednesday afternoon; despite the low rating, the share was still very good. In 1981, the game marked the return from the long strike, and fans did not watch in their usual numbers. However, that game drew much better than recent broadcasts.

The ratings’ linear regression line trends about as flat as it can get. The share drops a bit, meaning the additional households turning on their TVs in that time frame weren’t watching the game. During this stretch, this game was money in the bank for the networks.

Those are nasty trend lines for a network trying to make money off this game. If that slope holds, no one will be watching the game on television in about 10 years. The steep drop in viewership means that the All-Star telecasts are not even maintaining the same number of households: 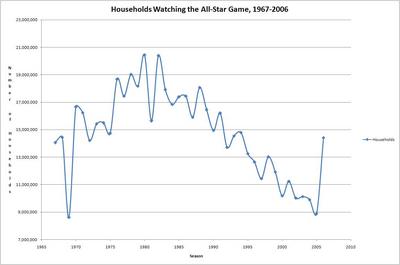 “Anybody who says the All-Star Game has lost its luster doesn’t know anything about baseball and doesn’t know anything about television,” Goren said, his voice rising. “It’s absolutely absurd.” That the ratings are down from the 1980s reflects the growth of cable television, not fading interest from viewers, he said. “The All-Star Game is going to have 30 percent more viewers than the
final episode of ‘The Sopranos,’ which everybody thought was a big hit,”
Goren said. “The All-Star Game is flat-out the top-rated show of the
summer, and it tops the ratings every summer.”

The following graph displays the percentage of households with cable from
1977 to 1999 (thanks to tvhistory.tv): 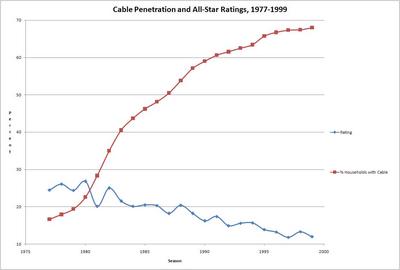 It’s certainly true that the explosion in the growth of cable and satellite TV happened about the same time as All-Star ratings began their decline, and the two have continued to move in opposite directions. Does this explanation make sense? Subscribing to cable provides a viewer with more choices of programming. More choices means fewer people turn the TV off, so share should take a bigger hit than rating. Indeed, that’s what we see, as share falls off more steeply than rating. But the ratings fall implies that viewers were picking other programming
than the All-Star game as well. Some segment of the population that watched the game in the 1970s decided to watch something else through the Eighties, Nineties, and Aughties. It would seem that to a certain segment of the population, the game indeed lost some luster.

Let me suggest a reason. Before cable (BC), television consigned sports reporting to the local news. If you watched the late local newscast in your area, you saw highlights of the local team’s game, and maybe another team if something big happened (no-hitter, rival in a pennant race). The networks showed one or two national broadcasts of games a week, and they were often competing with local teams. In addition, local games were not always televised. (I listened to more contests than I watched until we installed cable.) So the All-Star Game was one of the few chances given a fan to see any number of great players during a season.

Now cable comes along, and suddenly, games are available. Local teams put their non-broadcast games on pay stations, so viewers can watch every game. Superstations that broadcast the Braves, Cubs and Yankees add more choices. There’s a new company called ESPN that shows highlights of all the big plays. I remember finding “SportsCenter” after finally installing cable. Every night after the local news I tuned in to see how my fantasy team’s players performed that day.

In the early 1990s, ESPN added six national broadcasts a week, including at least two West Coast games. As time progressed, our choices grew to the point that now Extra Innings and MLB.TV make almost every game available for viewing. A fan can watch the stars play every day. One rationale for watching the Midsummer Classic disappeared.

Can these ratings be revived? The 2006 game showed an increase in viewership, attributed to the competitive nature of the contest. Unfortunately, rigging games to make them competitive fails as a usable strategy. Note that the idea to make the game count by using it to decide home-field advantage in the World Series did nothing for the ratings; instead, in 2004 and 2005, ratings were actually lower than in 2002, the infamous tie game. The players, however, seem to be taking that seriously; only two stars bowed out because of injuries in 2007; in recent times a number of stars had opted out of the game for a long holiday. If the players take the game more seriously, maybe the fans will also.

I would add one thing to the mix–money. Set up a purse with non-trivial amount of money, winning team takes all. There are about 40 players and coaches on each side these days. A $10 million stake means $250,000 for each player and coach on the victorious team. That would certainly bring out the competitive side of all the participants. And given the success of the big-money game shows, people seem to like to watch contests with a lot of cash at stake.

The All-Star game was the event of the summer for baseball viewers for the first 15 years it moved under the lights. The growth of cable appeared to hurt the ratings by giving viewers not only more choices on All-Star night, but more baseball to view throughout the season. The Midsummer Classic feels less special today, and a smaller percentage of the television audience watches. Reinvigorating the ratings of the All-Star game requires a solution more innovative than deciding home field advantage. While not a huge issue for MLB, bringing ratings back to their levels of the 1970s would bring in more money to the league’s coffers and serve as another indicator of the health of the game
in general.