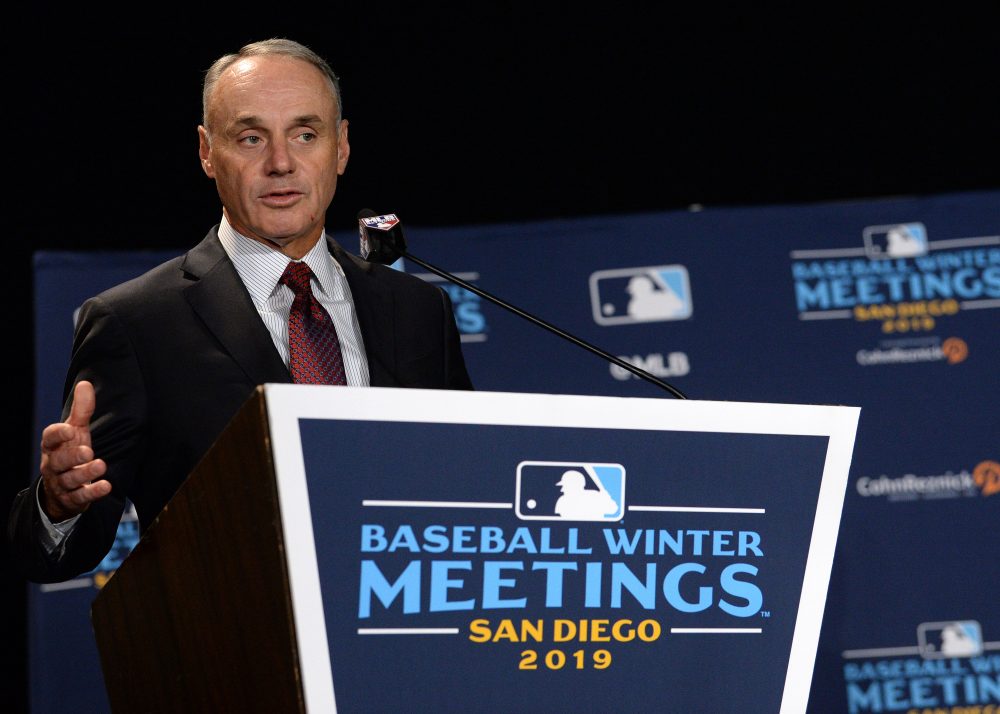 This article was originally published on May 11.

During the Friday evening news dump, a time specifically reserved to quietly sneak out information, an amended Rule 4 Draft was announced which sent shockwaves throughout all levels of the sport: ESPN’s Jeff Passan and Kiley McDaniel reported MLB will have a five-round draft on June 10.

While the pushback against the curtailed draft is nigh-on ubiquitous—everyone from super-agent Scott Boras to scouting directors to travel ball and college coaches—the smoke signals had plumed for weeks before the eventual reality currently facing scouting departments was revealed. The main changes include an 86 percent reduction in number of players selected, signing bonus deferments extending into 2022, and hard caps on signing bonuses for undrafted players at $20,000.

A good-faith argument for shortening the draft is limited and unpersuasive in the grand scheme of things, but with the ongoing global pandemic continuing to cut into the season, there exists some reasoning behind the gutting of the draft, if only on a temporary basis. As the calendar flips into the summer, and the real possibility of an entire minor-league season being washed away looms, there is no structure to implement 40 newly-acquired players. With the NCAA granting an additional year of eligibility to spring-season athletes, MLB could kick the can down the road another year in the hope that status quo can be regained. As of now, the changes affect only this year with the fate of next year’s draft still shrouded in uncertainty.

However, as was the case with the billowing clouds of smoke leading up to the announcement, this does not appear to be a one-off decision. Ignoring, for the moment, the cavalcade of macro-level questions raised by the decision: What is the draft going to look like a month from now and how did we get here?

“There are plenty of guys I wish I would have seen more (this spring) and I’m sure my bosses wanted to see more of the top caliber players,” a National League scout said, requesting anonymity to speak freely on the topic. “With the amount of information we collect on players prior to their draft years, we could hold a full 40-round draft today if we wanted to.”

The draft has always been an inexact science. Whether you’re an old-school scout or new-age quant, there are fewer data points to suss out each team’s draft board. The variability and risk is amplified, but it’s a level playing field with every team’s scouting department hamstrung in the same way. For that reason, the same scout believes this year’s iteration of the draft have a different composition in terms of who is drafted.

“I think you are going to see a lot more players from major colleges and programs taken because you’ve seen the track record,” the NL Scout predicted. As to the players most hurt by the decision: “The smaller school types, and also especially the pop-up guys.”

One example cited was left-handed pitcher Seth Lonsway from Ohio State. His arrow had been trending upward from a mid-round prospect to someone who could go in the first few rounds. Lefty pitchers with athletic frames who throw into the mid-90s with a plus breaking ball will always do well, and Lonsway was a player who needed to demonstrate over multiple looks that the stuff was worth it and his shaky command was at least tolerable.

The redshirt sophomore had flashed advanced secondary pitches to rack up impressive strikeout numbers and this spring saw a jump in velocity that skyrocketed those totals to 42 in 18 innings. However, command woes led to an equally staggering walk rate. In his last start of the season, he failed to get out of the third inning while walking eight. So who is the real Lonsway? The pitcher in his final start against Stetson? The one who vexed Georgia Tech for five innings and 12 strikeouts? Or something in the middle?

High school players also have a case for being the most adversely affected. This year’s draft class was already skewing heavily towards the college crowd with an unusually deep crop of talent, and while the upper echelon of players will only feel the ramifications of deferred bonuses, it’s that next tier that is precariously stuck in no-man’s land.

In previous years, the prep player held a point of leverage when negotiating a draft bonus by threatening to go to school, wasting the club’s draft selection and corresponding pool money. Now, college teams will be facing a glut of players vying for playing time, partial scholarships, and uncertainty in future drafts. The case is muddied further when the difference between being selected toward the end of the fifth round and signing as an undrafted free agent is more than $300,000. Faced with choosing an uncertain life in the college ranks, or a well-below value bonus than previously thought, it’s not an easy decision.

The one type of player who could both be helped and hurt is the college senior. Heading into the season, they knew it was going to be a make-or-break year, professionally. Oftentimes the “senior sign” is someone picked in rounds 5-10 as teams attempt to manipulate their bonus pools to save money and entice other players away from going or returning to school. With the number of selections so drastically diminished, there are fewer places to get creative, like the Mets did last year when they selected Matthew Allan in the third round and proceeded to select the rest of their pool-affecting players at minimum slot bonuses.

Due to the changes to the draft, it would appear college seniors would get far fewer opportunities to be drafted. However, with an added year of eligibility from the NCAA it’s almost as if they are becoming juniors once more. Moreover, the $20,000 undrafted free agent signing bonus resembles what they would have gotten under previous draft rules, yet this time they have the power to choose which team to sign with instead of being stuck with whichever team drafted them.

“I could see a scenario where a team decides to look at the draft through a different lens,” an American League scout said. “Any player that is closer to physical maturity, where they are more developed and closer to the show with less guesswork, that could be beneficial. We always want the players with the highest potential and used (a senior’s) lack of future college eligibility against them, but now they get to make that choice again.”

Evaluators have been allowed to contact players and their “advisors” for several weeks as the interview process shifts from the standard in-home visits to e-communication. A moratorium on video sharing was instituted in April to dissuade social gatherings of players, and players have had to get creative in order to promote themselves during the current vacuum of games.

“We’re paying attention to the social media accounts of almost every draft ‘follow’ we have,” the AL scout said. “If I can see a bullpen, or open-side angle in the cage, anything that can help round out the picture.”

Players like junior college lefty Luke Little and prep righty Mick Abel are among those who have used the viral platform of the internet to up their stock. As states vary on the conditions of loosening social-distancing guidelines, some players will have an advantage based on their geographic location, or having tools like rapsodo or TrackMan at their disposal.

As the month leading up the draft flies by with little new to evaluate, the top of the draft appears to be settling in and fewer surprises are expected. Recency bias will dominate the selection process with little choice. Then again, in unprecedented times you expect unprecedented results, so who knows how this year’s draft results will look in 10 years.

It’s problematic across the board to prognosticate what happens beyond June 10, as representatives from the players union and the owners wrestle with the machinations of jump-starting an abbreviated season. The draft has been used before as a negotiating tool during labor strife, it certainly was this time around, and it will be again in the future. Selling out the future player who doesn’t have a seat at the table is nothing new, but just because it’s normal doesn’t mean it should be accepted.