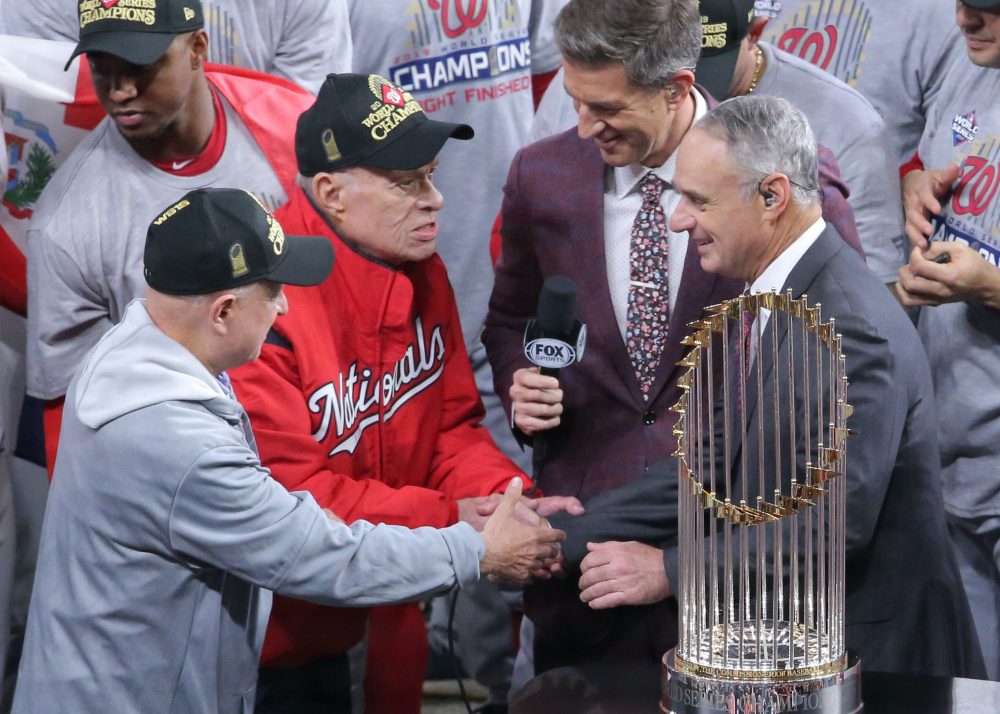 This article was originally published on Feb. 20.

Few have the privilege of choosing the moment that defines them. If you believe the Greeks, it’s a futile effort, bound to incite the very result one means to avoid. Rob Manfred is choosing his legacy, seeing it cement in real time—as someone who would have been glad to sweep the biggest cheating scandal in 100 years under the rug. The commissioner’s response to the so-termed banging scheme has largely centered around telling the public how it should feel.

And yet it’s having the opposite of its intended mollifying effect. In that sense Manfred’s handling of the foremost scandal of his reign has been characteristic: Public sentiment was misapprehended or disregarded in coming to an incomplete, unpopular decision, nevertheless presented to the public as unquestionably correct. The commissioner has mistaken his power for justification, bristling when his methods are called into question by fans and players alike. The rancor that has fomented all offseason threatens both MLB’s narrative and verisimilitude. To this point, Manfred has shown himself markedly unprepared to combat the existential threat presented to his sport. If he can’t supply answers to the questions that threaten to topple the league, the league may be forced to consider a commissioner who can.

It’s perfectly simple for Manfred to say of the league’s investigation, as he did Tuesday, “we cannot be criticized for leaving stones unturned.” Clearly, though, that’s not his call to make. Appraisal of the league’s response, by the nature of public opinion, demands to be left with the fans, a reality the commissioner struggles to grasp. An enduring trait of Manfred’s crisis responses—throughout his tenure—has been an evident desire for control.

Rob Manfred to the reporter who broke the news on the Astros' Codebreaker scheme: "You know, congratulations. You got a private letter that, you know, I sent to a club official. Nice reporting on your part."

Manfred’s snark might be easier to swallow had reporting not brought the Astros’ scheme to light, essentially forcing the league to act. Beyond the initial reporting of Evan Drellich and Ken Rosenthal, Jared Diamond’s work for The Wall Street Journal, downplayed by the commissioner, brought to public knowledge new evidence about the origins and pervasiveness of the scheme—information Manfred argued would have made the nine-page report over-long. The public forum in which the telenovela has unfurled has undoubtedly been a mess, but as indisputably the resultant discourse has given us broad and granular knowledge about the conceptualization, extent, and effect of Houston’s cheating we simply would not have gotten from the commissioner’s office alone.

As the game’s most prominent figures continue to opine on a months-long discourse, it’s worth wondering if public trust in Manfred as commissioner is irrevocably frayed. Fans are expected to trust the league’s process despite it having produced results many deem unsatisfactory and legitimate concern that same process would have, left to its own devices, failed to disclose to the public cheating that may have turned a World Series. The commissioner’s first priority may not be to serve the long-term interests of the game, as we all might hope for, but you’d at least expect him not to directly mortgage it.

It often feels as if Manfred is watching a different game—if not existing in a different reality—than the rest of us. Pointed denials about a fluctuating, record-producing ball dominated conversation in both 2017 and 2019, labor fights loom in both the majors and minors, a changing game has fans of every generation weary, and in each case the Office of the Commissioner has been out of step with the public apprehension of the situation at hand. The disregard for public opinion might speak to an admirably cohesive and unaffected vision for the sport were not the bars of ownership so clearly on the scales. It’s hard to imagine Manfred has any prevailing practice aside from the course of action that, in each situation, is judged to do the least harm to MLB’s publicity and short-term revenues.

The Astros’ system is all anyone can talk about, but its contours are visible in the controversies of the past. Take the juiced ball scandal. The other one, in 2017, when all those records broken last season were first set. In the first half of that season it became apparent, thanks to research from Ben Lindbergh, our own Rob Arthur (over at FiveThirtyEight), and others, that something was different with the baseball. Manfred twice denied, with arguably disingenuous statements. It was only after the season—following a number of pitchers speaking out—when he commissioned a study into what had changed. After a diverse committee concluded the ball was changed, affirming myriad other research, the matter would have appeared settled.

Even before the sequel to that season brought the ball back to the spotlight, though, Manfred had more to say. Shortly before the 2019 season, he reaffirmed his argument that training, coaching, and analytics contributed more to the rise in home run rate than changes in the baseball’s composition and properties. It was a baffling, unnecessary misstep, but was nevertheless fitting for Manfred and his reign. Beyond telling people how they should feel, the statement gives weight to a notion of a right game that we could have were not players so wrongheaded—a Smoltzian philosophy of the sport, wherein “society has evolved” wrongly. If Kris Bryant bunted against the shift more often, games would be 150 minutes long and every second baseman would be Omar Vizquel again, or something.

It’s not especially salient that Manfred’s statement was untrue, or that those paying close attention were unfooled. More important, from the league’s perspective, was to blunt controversy with the right mix of discretion and misdirection. The league would rather appear untruthful later, to the few who might notice, than invite scrutiny now. Legitimate issues illuminated by a transforming game are used as levers arguing for a product more packagable and profitable. This driving practice has had its hamartia exposed, though, in a controversy so explosive all but total transparency is liable to be read as a cover-up.

Usually, people move on; it’s the curse of the modern news cycle. Manfred has been candid about his surprise at the half-life of this particular scandal. Unlike recent juiced ball mysteries, this saga won’t die as the games get played, and get papered over with “balls were not juiced” headlines that deeply misrepresent reality to the league’s benefit. If the sport became an unreliable narrator for hardcore fans in the 2019 season, the winter ensured the same reality for more casual segments. Modernity makes Instagram sleuths of us all, but the work hours spent poring over shirtless pictures of various Astros have become a hazard to both national productivity and the league’s ability to control the narrative. As outrage continues to build, faith in the league’s version of events has diminished to basically nil.

MLB is learning the limits of control. Asserting something doesn’t make it so, and much as Manfred might speak of consequence, in truth the Astros’ season-long gauntlet through the public wringer has yet to begin. The commissioner’s office may prefer the banging scheme in the rear view, where it can’t hurt profits, but in whatever small sense the league might have influenced public outcry—transparency, thoroughness—its course has only exacerbated opprobrium. So long as profits are insulated, Manfred’s job is likely secure, but in truth that reality no longer appears as certain as it did in October, especially if there are more bends in this road. Should that be the case the 10th commissioner will no longer look secure on his perch, having tossed in his lot with putting this scandal to bed. Should he need it, Manfred seems unassured of fan or player support, given his bet was also effectively against them.