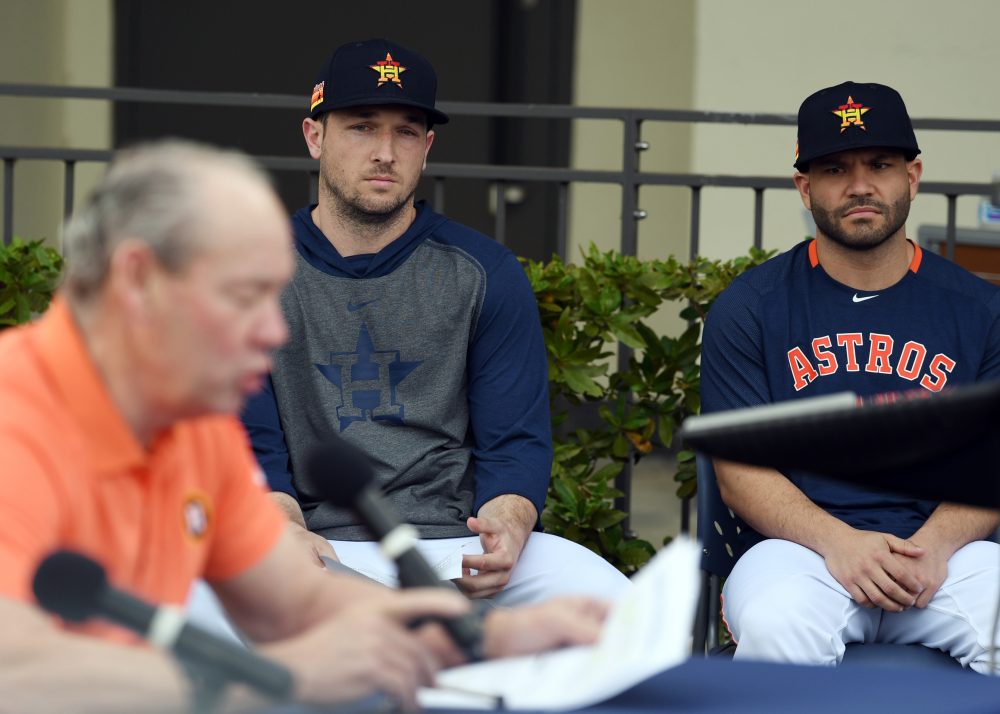 This article was originally published on Feb. 18.

The clouds could hardly have been less ominous as they lolled across the brilliant blue sky of West Palm Beach. Beneath them a folding table and a podium faced rows of plastic chairs in the manicured grass, an arrangement worthy of a makeshift backyard wedding ceremony. There, Jim Crane, Alex Bregman, Jose Altuve, and Dusty Baker made prepared statements regarding the greatest scandal facing the game in a generation. Then, questions were asked, and things fell apart.

We’ve watched the same dance routine countless times: the TMZ report, the denial, the denial of the denial, the cringeworthy rushed apology, the internal investigation, the light suspension, the mechanical second apology (where we join the Astros, already in progress), the media backlash, the backlash to the backlash, the redemption narrative. It’s strange to see such an imperfect process honed to such perfection. We watch as disgraced celebrities go underground for a while and then reappear, unaffected, despite the lives they’ve ruined. Or, failing that, they embrace their persecution as their identity and sell to another crowd. And we watch, frustrated, because there’s no systematic process for differentiating the good faith from the bad faith. They never seem to pay the price, because we don’t even know how to make them pay.

This is why we have hell.

The ancient Athenians were a surprisingly cynical bunch. They put together the model for modern civic organization, the first recorded democracy. And instead of devoting their philosophy to the potential of the economic and social powers within reach of a band of people who have figured out how to cooperate for mutual gain, their team MVP Socrates spends most of his time worrying about justice. From the start it was obvious that some people weren’t getting what they deserve, which shines through to us with Alcibiades, history’s first populist, failing upwards time and again.

Fast forward to the early Christians, a persecuted minority sect under the thumb of the Roman Empire. They, too, watch their numbers executed without cause, while the rich and powerful do terrible things with no consequences. When the judges themselves are above judgment, there is no such thing as judgment, and suddenly you’ve got yourself nihilism. The next step is obvious: appeal to an even higher judge, one who can’t be corrupted, and can’t be fooled, and whose punishment can’t be bought off with all the influence and money in the world.

Baseball is an amoral activity. Not immoral, except when it was played on Sunday in the nineteenth century, but absolutely unconcerned with the concept of ethics. It’s not that athletes are intrinsically bad people; it’s that the act of playing baseball, the immersion into its very rigid system, forces them to stop acting entirely human. They have to behave the way the rules tell them to.

The problem is that we have these four men appointed as judges, and it’s their job to decide what’s right or wrong. We need umpires, obviously, because you can’t have a competitive sport where the catcher calls the strikes. But their presence creates an entirely new problem. Once you have people designed to stop people from cheating, it becomes their obligation to stop people from cheating, and lifts that obligation entirely off the player. Their only moral obligation is to win; an outfielder who muffed a diving line drive would be pilloried if he lost the game by refuting the umpire’s favorable call. That’s how we get the phrase “it’s only cheating if you get caught,” because cheating doesn’t mean cheating in the traditional moral sense. It doesn’t equate to immorality, just potential disqualification.

“We have a great ballclub, and I look forward to talking to you about the future.” —Jim Crane

“We as a team are totally focused on moving forward to the 2020 season.” —Alex Bregman

“Our team is determined to move forward to play with intensity and to bring back a championship to Houston in 2020.” —Jose Altuve

On the writing guide website Grammarly, which is basically E.B. White meets WikiHow, there’s a guide/template for how to write an apology. It breaks down into six simple steps:

This is pretty pedestrian stuff, an outline any 10-year-old could duplicate, except for the fact that most adults still don’t get this right. They use the passive voice, trying to shield themselves by claiming that “mistakes were made,” or the conditional, “I’m sorry if people were hurt,” as if there’s the possibility that there shouldn’t have been. There’s the tribalistic favorite, which came up multiple times during the press conference: thanking the city of Houston, not for their forgiveness, but for their support, insinuating that it is the team, burdened by the weight of apologizing, that deserves our sympathy.

And then there’s the final trick, detailed through the quotes above: the “we just want to move forward” sentiment. Painted as a plan, a vow that things will be better going forward, what it acts as instead is an act of power, a dismissal. To say “we are totally focused on 2020” follows logically that there is nothing more to say about 2017, that the act of reflection is complete, that the case is closed. It’s absurd on its face, given that each new day, some revelation or press conference adds a new layer of context to this hellish casserole of a scandal.. But more than that, it’s just not Alex Bregman’s decision to make. The Astros don’t get to decide that it’s time to move on. You can’t force someone to accept an apology.

You can’t even force someone to mean what they apologize for. The only thing you can do is force them to lay out some folding chairs and wire up a podium.

Everything written above about baseball is equally true about Baseball. Baseball has a judge, hired by its owners. The Commissioner of Baseball has two basic jobs:

Rob Manfred is very good at one of these. But he’s shown very little inclination that he’s interested in anything regarding the long-term health of the game, and his treatment of the sign-stealing scandal is a perfect example of that short-term perspective. His solution upon learning about the issue in 2017 was to keep it quiet—such a story coming out would be harmful for the game, after all—and try to intimidate teams into cleaning it up themselves. But if he had no incentive, neither did they. After all, for all parties, it was only going to be cheating if they ever got caught.

Of course, they were going to get caught. It was impossible for them to not get caught. To act as if it were anything less than inevitable demonstrates the pure blindness of Manfred’s leadership, his myopic gaze at the next quarterly earnings statement.

Today, Baseball is a baseball game run without an umpire.

The unwritten rules of baseball are designed to fill the vacuum where rules and authority fail to reach. The guillotines are already being built. Heads will roll.

We don’t know what contrition looks like. There is no formula for defining good faith from bad faith. Instead, our society is built on a legal foundation under which crimes and punishments are linked to forgiveness: When someone has paid for their crime in full, they’ve earned a second chance. It doesn’t work, because we know that in the legal system, punishment correlates less with crime than the criminal and their status. It also doesn’t work because not all forgiveness is based on crime. Broken hearts and banging schemes do not apply to sentencing. So when Alex Bregman’s monotone assaults our senses, we don’t actually know what we want him to say. All we know is that it is, never, ever it.

And because we don’t know what the right way looks like, you’ll always have men like Joe Maddon, who just want it to go away so that “the healing can begin.” As if this is how healing works, forgetting instead of forgiving. That all that matters is that the machine keeps working, and keeps spitting out money, regardless of what it’s working for.

The part that’s always missing from the apology is the plan. Not “things will be different now” but “Here are the steps that will make things different now. This is how you know you can trust us.” We never get it because it requires a loss of autonomy, but it also requires a level of transparency that we rarely get from people, let alone corporations, let alone corporations who have to succeed through secrecy. Firing Jeff Luhnow is not enough, hiring Dusty Baker is not enough, because the roots of these evil are not in people, but in systems. Systems that incentivize winning over sportsmanship, cheating over possibly being cheated. The Astros did not create modern baseball. Modern baseball created the Astros. The only solution is to throw back the covers on everything, from accounts receivable to human resources, to allow us all oversight.

There will never be anyone, no umpire, no commissioner, who will give us that. Not in this world, anyway.

You need to be logged in to comment. Login or Subscribe
John Johnston
“They never seem to pay the price, because we don’t even know how to make them pay.,
...This is why we have hell.”

1. It is 100% not your job to make anyone pay. That is the job of law enforcement and the court system and nobody else.

2. “Why we have Hell” is an easy question for a Christian to answer. It is for people who disobey the instructions of Christianity. One of the most important of those is Matthew 7:1 - “Judge not, that ye be not judged.”

Remember that the next time BP is judging and urging punishment for someone who has not been convicted - or, sometimes has not even been arrested.

There are multiple stages to the justice system. The first is an arrest, and it requires evidence. If you’re judging someone before they are arrested, then you are judging falsely because there is insufficient evidence against them. Even if they are arrested, you can’t judge them yet, because they have not yet been found guilty.

The second step is the indictment. A district attorney or a grand jury will issue an indictment if they believe there is sufficient evidence that a crime has been committed to justify a trial. You can’t judge someone who has been indicted, because they haven’t been convicted of anything. There hasn’t even been a trial.

If there is a trial, and someone is found guilty, you can actually state that they have been found guilty of the crime they were accused of. But you shouldn’t judge them, because a lot of people have been convicted of crimes they never committed. You also shouldn’t judge them because there’s an appeal process, and sometimes verdicts get overturned.

It boils down to don’t judge, leave it to law enforcement and the courts, don’t be demanding someone’s scalp without a conviction, and even then be ready for the case to be overturned on appeal.

Or more simply: “Judge not, that ye be not judged.”

I will leave you with the words of Sir Francis Bacon, who served both as attorney general and lord chancellor of England:

“Revenge is a kind of wild justice; which the more man's nature runs to, the more ought law to weed it out. For as for the first wrong, it doth but offend the law; but the revenge of that wrong putteth the law out of office.“

“... vindictive persons live the life of witches; who, as they are mischievous, so end they infortunate.”