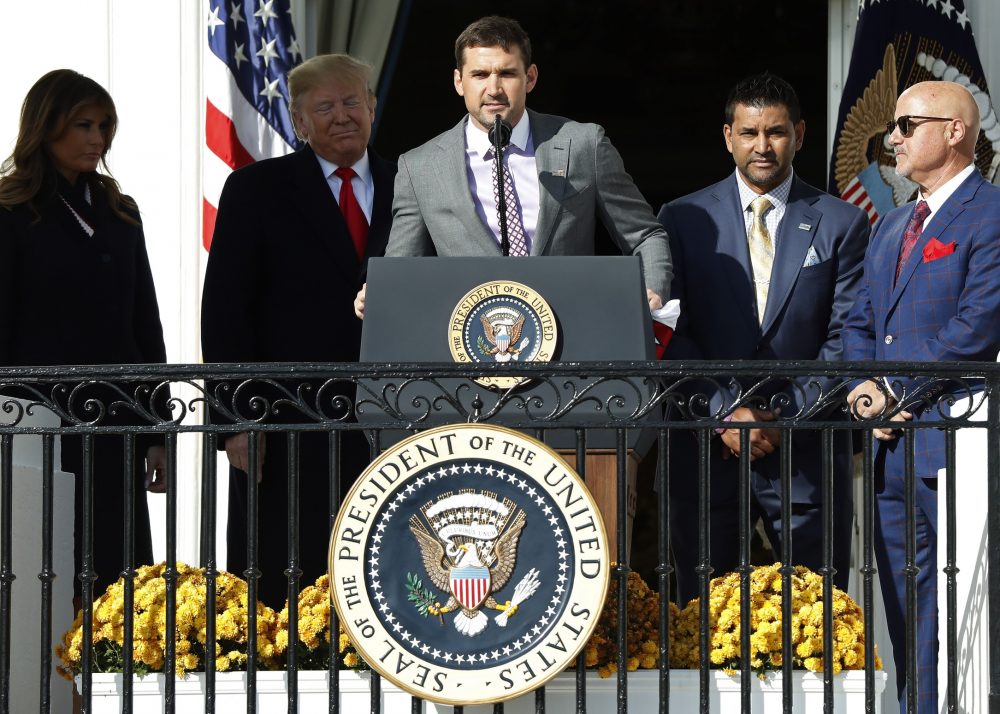 This article was originally published on Jan. 28.

I want to tell you a story about Ryan Zimmerman, who just re-signed with the Nationals this past weekend. First, though, I need to tell you a story about a former student of mine. It’s a story she’s told publicly and repeatedly, though I’m going to change some of the details for reasons I think will be self-evident—I am also writing this with her permission and approval as to the details shared. She came to the United States when she was 10 years old. It was a sudden move from a large city to the D.C. area, from another country. A move not made with legal authorization.

Her mother worked in food service, and would get up at 4 in the morning to go and work in kitchens. My student enrolled, along with her siblings, in D.C. Public Schools: a school system that, like all public school systems, has the obligation to serve the students in its community, regardless of their immigration status.

She was, from the first time I taught her, a great student, hardworking, sure, but also thoughtful, resourceful, and hysterically funny. She liked to build things: robots, green walls, lab equipment. Her dream was to be a civil engineer: her home city has air quality problems and she wanted to see which plants in which arrangements sequestered the most particulate matter. To engineer watering systems to deal with drench and drought.

College came around, and this was a student for whom the “big money truck” should have pulled up. I taught a number of students whose excellence earned them not only full-ride scholarships, but also lab funding, travel, and even walking around money. Everyone, in my mind, deserves free college, but in light of the busted system in which I had to work, I’m glad we could at least get those particular kids paid for.

Here’s the thing about not having the correct paperwork: You can’t get grants. Student loans. Colleges treat you as an international student. She had to take tests verifying her proficiency in English, despite a diploma from a U.S. high school, and a 20-page senior thesis.

She had to navigate complex systems that her peers glided through, aided by money and the accidents of their birth. That’s the hard part, to me, the enraging part, the part that makes me want to shake the world until the doors that easily opened for others rattle open for her, too.

Had her mother moved her to Maryland, well, there’s a Dream Act, and a robust state university system that produces engineers on an industrial scale. By accident of relocation, she’s moved to D.C. instead, which had neither. She did, eventually, get a small scholarship to attend our one fairly bad public university—D.C. students get in-state tuition nationwide as Congress’ concession to how lackluster UDC truly is. But she went and graduated, and I believe that she will accomplish great and amazing things, in part because she already has.

I’m telling you this story because it’s not a baseball story, but a community story. A D.C. story. The kind of small story that gets lost in debate and chatter. A real story about the real consequences of how our country drew imaginary borders across someone else’s land and said who could be here and who could not.

I want to tell you her story not because she is exceptional, or that undocumented people have to be exceptional to be worthy of humane treatment, but simply because she is someone I know and care about. That her story is the story of D.C. as it really is, the place and community in which I grew up.

Now, lost in the chatter about Kurt Suzuki’s bizarre MAGA photo op at the White House is Ryan Zimmerman lauding the current president for keeping the country “safe” while essentially saying the mission of MAGA has been a success: “We’d also like to thank you for keeping everyone here safe in our country, and continuing to make America the greatest country to live in the world.”

A president Zimmerman likes well enough to go golfing with. A president whose immigration policies would detain and deport members of the community in which Zimmerman plays, a community that cheered him on in the World Series he waited 15 years to reach.

There are few figures in D.C. sports more sacrosanct than Zimmerman: He’s our Joe Mauer, our David Wright. Our symbolic good-guy Captain America, immortalized in bobblehead figurine. Mr. National, the last Washington player to wear the number 11. The face of the franchise.

It’s hard to reconcile that Zimm with the one who stood at the White House podium and declared America safer because it has fewer people in it like my student. It’s hard to reconcile Zimmerman, the wealthy, white Virginian, with the one who put the franchise on his back for all these years, who hit the Nationals’ first home run in their first World Series. The one who, at the parade, said he grew up with D.C. as a sports town.

The Nationals re-signed Zimmerman to a one-year cushion of a contract: $2 million plus performance incentives for staying healthy. Even with the $2 million in buyout money he’s getting, it’s a fraction of what he made last year. The kind of contract everyone saw coming. It’s Zimm after all. They weren’t gonna let him go, even with 2019 being mostly a struggle for him. His last home game will be a sellout regardless of the numbers; hagiographies will surely be written. Some might even skip the White House visit and the disappointment and betrayal it engendered.

Zimmerman came of age in D.C. but he’s not of D.C.—he’s made that much clear. He will surely be a mascot, a face, a symbol of the franchise for as long as it exists. I can’t root for him, however, can’t endorse the myth, when I can’t forgive the man.

Ryan Zimmerman told half a million people that he grew up with us. He grew up, sure, but I’m not sure who he’s become.