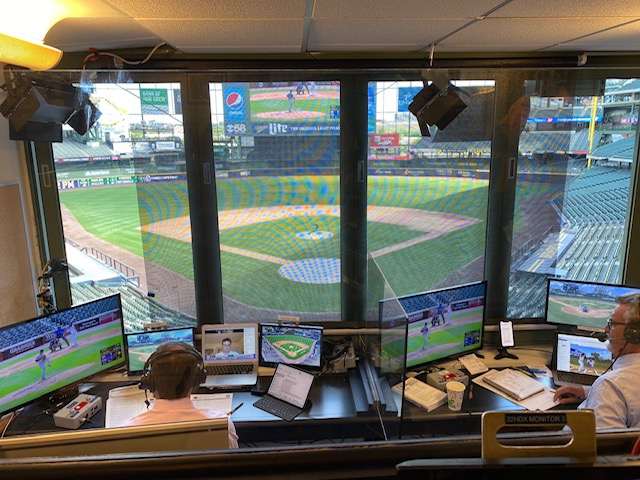 This article was originally published on Aug. 14.

During the top of the third inning of Wednesday afternoon’s Athletics-Angels game, the grounds crew rolled out the tarp at the Oakland Coliseum. As some crew members watered the infield grass and others stretched the covering over the dirt, Matt Chapman rifled a double to the wall in left-center field. The A’s broadcast team described the dual action as they watched it—Chapman’s double, toward the rock pile down at Angel Stadium in Anaheim, and the field maintenance happening in front of them, below their perch in the Oakland press box, nearly 400 miles away from the game they were calling.

Such is the life of a major-league broadcaster in 2020, a season which has presented challenges to nearly every facet of the game, but few as fundamentally different as calling every road game from your team’s home stadium. The process is intricate and complicated, relying on teams of professionals communicating and cooperating remotely, navigating previously uncharted waters to try to deliver something resembling normalcy. So it’s like everything else this year. Or, as Oakland Athletics radio play-by-play man Ken Korach put it:

For A’s road games, Korach sits in the visiting television booth at the Coliseum, with fellow broadcaster Vince Cotroneo in the usual home radio booth, to Korach’s right, alongside the engineer. When color commentator Ray Fosse joins them on the call, as he occasionally does, Fosse sits in the auxiliary press area to Korach’s left, glass between each of them.

As big of a challenge as it is trying to keep 900 ballplayers plus coaches and traveling staff safe, broadcast crews presented a whole other issue. More than 20 broadcasters in the American League alone are 65 or older, putting them in the higher risk demographic for serious illness or death from COVID-19. And like so many others, some have non-obvious circumstances further complicating their working lives.

“My wife has an auto-immune disease, so I wanted to make sure the workspace was going to be safe and we were going to be regularly tested,” said Brewers TV play-by-play man Brian Anderson, who calls Milwaukee’s road games from Miller Park. “We all know we have to look after each other and carry ‘the bubble’ principles to our private lives away from the jobsite. I’m grateful to be working and I’m grateful our network and crew are taking this virus seriously.”

Both Anderson and Korach said they were relieved to find out they wouldn’t be traveling like normal this season. Korach says the A’s crew was given the option to call games within driving distance in person, but there were more than a few catches.

If they wanted to go to Anaheim, the A’s broadcasters would have to drive there, not just separately from the team, but from each other. They would have to stay in a separate hotel from the team. They would have to take separate cabs to each game. All of that made it not worth the hassle, not just for games in Southern California, but even for those in San Francisco this weekend. Instead, the A’s broadcast crew will be back at the Coliseum while the team plays across the bay.

Once baseball looked like it was actually going to be played this year, without fans, that left producers around the country 3-4 weeks to figure out how, exactly, people were going to be able to watch and listen to it. They toyed with having broadcasters call the games from home. They worked with MLB Network on engineering, and to develop some general protocols. The regional sports networks held calls every other day leading into the season to hammer out a framework, smoothing out the technical structures and setups so they didn’t have to reinvent the wheel with each new road series (though the A’s still schedule a call with their upcoming opponents before they play). Eventually, they landed on the setups you see today in booths across the country.

“There has been incredible collaboration between the league, the teams, the players, the networks, the technicians and announcers,” Anderson said. “I’ve never seen such synergy in my 25-plus years in the industry. It has been refreshing. The amount of work, planning, and on-the-fly adjusting that has occurred has been monumental.”

As for how that all comes together in the booth, Korach sees the program feed that viewers see at home right in front of him, alongside a larger monitor split into four quadrants, each with a different feed. For the Seattle series, one was focused on the scoreboard. For stadiums that have bullpens that are out of play, often a camera will stay trained on each of them. Perhaps most importantly, the “All 9” provides a high, home plate shot, allowing a full view of the defense.

“Especially now, with all the shifting, at least you can glance over there—and I’ve been trying to do that before most of the pitches—and then you can see who’s in the shift, three infielders on the right side, where the outfielders are playing,” Korach said. “So that’s been really important.”

Anderson takes a slightly different approach with his available options. He’s got a stats laptop in front of him and that quad box monitor of different angles behind him. On another monitor, he can reference the produced feed when he needs to for replays. But he uses the home plate robo camera to call balls and strikes.

“I literally put that isolated feed on a monitor in the space on the table I’d normally have a clear view to home plate,” he said. “Adjusting your eyes to look at the monitor instead of the actual field takes some getting used to. It’s not hard, just different. I still flinch on foul balls even though there are no players on the field.”

Calling a game remotely presents plenty of challenges, some expected, some unforeseen. This is Korach’s first time ever having to do so in 40 years as a broadcaster. Anderson has called some NBA games remotely in the past, but baseball demands tracking more players over a much larger space, with plenty of action happening away from the ball, where a single camera won’t catch everything at once.

“Baseball is the hardest sport to call off a monitor,” Anderson said.

As veteran baseball writers, broadcasters, and fans will tell you, the best way to read where a fly ball is going is not to try to track the ball itself, but to watch the outfielders. Are they sprinting backward? Cruising slowly, laterally? Just gazing, as a towering blast soars over their heads? More often than not, their body language will tell the rest of the ballpark what is happening. So what happens when that reference point is suddenly removed?

Came back from commercial and camera was on Jake in the dugout and while Gary says “and that ball is outta here” they then switch to Conforto jogging into 2nd, because it was a ground rule double lol

That’s the challenge of calling a game when there’s a single produced feed coming through for both the home and visiting teams’ radio and TV broadcast crews. But while Korach anticipated the fly balls being an issue, the single feed has presented an obstacle he hadn’t anticipated.

“The biggest challenge that I wasn’t prepared for is getting the runners around the bases,” he said.

Anderson has had to make the same adjustments.

“Following the balls in play with multiple runners on base is probably the most unnerving,” he said. “You’re at the mercy of the director in the road stadium. The way he cuts the cameras is what you see, and call, but that may leave you blind to the other baserunners. I’ve learned to just delay my call a little. It’s hard to jump on a big call with confidence because you’re just not sure watching off monitors.”

And there’s no backup if that feed cuts out, like it did momentarily in the middle of a play in the Athletics’ first road series in Seattle, after a player hit a ground ball to the left side.

“It reminds me of when they used to do the recreations in the old days when the ticker went down and you’d have to use your imagination,” Korach said.

Both men praised the natural sound their production crews have layered into the broadcasts, helping add a familiar ambience to the overall sound. In Oakland, not only are they using crowd noise from old games, but they’re also piping in the sounds of the fan drummers, a Coliseum tradition for decades, and have gotten an extremely of-this-moment assist from the most famous person to contract the virus that has upended American life—Oakland native and Academy Award-winning actor Tom Hanks. A stadium vendor at the Coliseum in his youth, Hanks has recorded sounds of himself hawking various items, to add to the vibe both in-park and on the broadcast.

While all those efforts help make a broadcast sound as “normal” as possible, Korach understands that it’s not his job to pretend like everything is normal, nor to deceive the audience into thinking they’re actually on the road with the club.

What does this mean for the future of sports broadcasting? If things work too well this year, might remote broadcasts become the standard moving forward?

“It’s crossed the minds of a lot of people, for sure,” Korach said. “But I would be surprised if it came to that.”

Anderson isn’t worried about his own ability to call games remotely, but rather the larger, industry-wide implications such a shift would create. Could teams try to cut corners by grounding their broadcast teams, eliminating sideline reporters, and relying on just a single truck of production, rather than the two-truck setup (one for the home team, one for the road club) that has been in place for years?

“I do worry about lowering the standards for properly covering live sporting events,” Anderson said. “And, I worry about our freelance community. They are highly skilled at their jobs and their livelihood is being disrupted. A centralized ‘world feed’ cuts labor in half. It saves money but these are highly skilled individuals and it will change their lives.”

Whatever baseball broadcasts look and sound like in 2021 and beyond, this season will stand out for its challenges and its surrealness, from masked players and coaches to cardboard cutouts dotting the stands. While the broadcasts have gone to incredible lengths to try to provide a “normal” game experience, Anderson hopes it’s actually the success they’ve had in spite of all the challenges that stands out, that their success offers a road map for others.

“We’re setting an example for how to operate a business while maintaining the health and safety protocols,” he said. “We’ve been operating as a TV crew for a month now and have had zero positive tests. I hope we can maintain that level of success. Wearing a mask, washing hands regularly, and staying six feet apart works to stop this virus. It is not political, it is simple science if we want to get our lives back and our economy up and running again.”