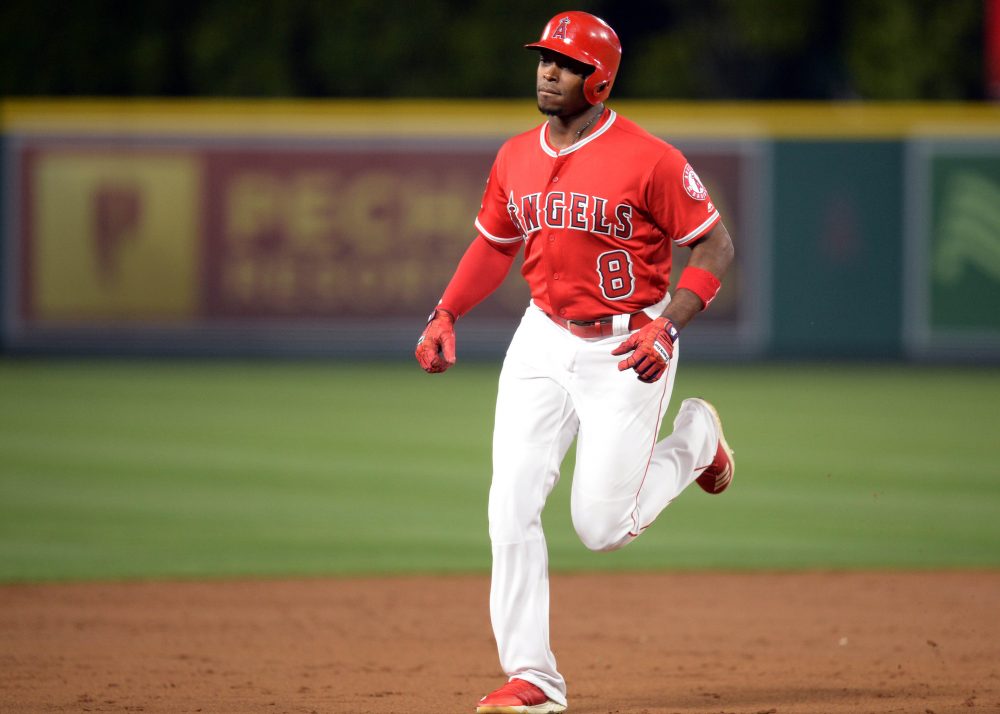 This article was originally published on April 15.

The year was 2003. It was a simpler time. In the case of my first recorded fantasy league, it was much, much simpler.

Apparently, I was in an eight-team, offense-only Yahoo! categories league in 2003. I say apparently because I have zero recollection of said league, its participants, or managing that season. I’m sure it happened, because the results are right there in my Yahoo! profile, but I just have no clue what happened or why. I won’t review that team—because there were, like, 11 picks in the draft—but I thought that you might get a kick out of seeing how an eight-team, offense-only lineup might look. Lord knows we could all use a chuckle these days. 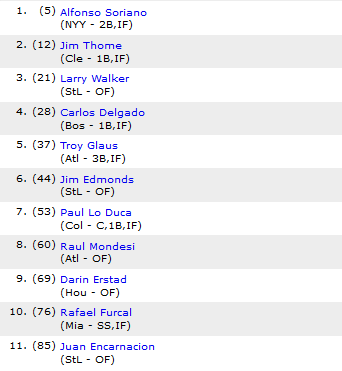 At the risk of sounding a tad basic, I got back into fantasy baseball after reading Moneyball and becoming fascinated by all stat-related things. I never cared much for math classes growing up, but that changed in a big way once the numbers became more translatable for me. After a handful of years spent in redraft formats, I joined my first keeper league in 2011, pretty sure that my wild success would lead to me running a big-league club by 2014 at the very latest.

What follows is mostly an exercise of “Fake It ‘Til You Make It,” where I wasn’t really sure what I was doing a lot of the time. Somehow, through trades and savvy waiver wire scouting, I managed to finish second in this 12-team points league. While 2011 was a solid showing, the following season I would draft Mike Trout in the 25th round, which, I gotta say, worked out pretty well.

Looking back at this draft, I’m stunned by the sheer #RememberSomeGuys of it all. Brian Wilson got picked in the third round. Tommy Hanson went in the fourth, as did Martin Prado (I played with some Braves fans so this kind of makes sense). Oh hey, Carlos Marmol showed up—and Aubrey Huff, before we knew he might be one of the worst dudes on the internet. We also had a John Danks sighting. (Ok, I’m done. I promise. Shout out Casey McGehee! Now, I’m really done.)

My strategy of taking mid-20s major-league guys early, with the hopes of their maintaining productivity for a couple of seasons while I found my footing seemed solid enough. I snagged Evan Longoria with my first pick, as the 26-year-old just enjoyed a .294/.372/.507 campaign, finishing sixth in AL MVP voting. Unfortunately, the 2010 campaign was Longoria’s last All-Star season, and he wouldn’t figure into my plans for too much longer (more on that to come).

Here’s a look at how the draft shook out. For some reason, the first four rounds got manually entered, so Carlos González was pick No. 21, Jon Lester (28), Shin-Soo Choo (45), and then the numbers matched up properly starting with Carlos Santana (52). And, might I add, C-eligible Carlos Santana was a thing of beauty. Not defensively, of course, but you get it, you’re smart.

A couple of weeks into the season, I realized that pitching was ultra-valuable, especially with a weekly eight-start limit. I also noticed that dudes who walked were also extraordinarily helpful (thanks, Moneyball!). My first trade was to cash in on a hot start from Josh Johnson, pairing him with a declining Todd Helton in exchange for Joey Votto and A.J. Burnett. Future Mark rejoiced at the acquisition of Votto.

Side note: I forgot just how good Johnson was between 2009-2011, before succumbing to all of the injuries. From the start of 2009 to his DL-riddled 2011, Johnson tossed just over 450 innings, striking out nearly three batters for every walk, with a 2.64 ERA. This has been another aside brought to you by Injuries Are Stupid and I Hate Them Forever.

Future Mark would be dismayed by Votto almost immediately being flipped with Jordan Zimmermann for Ryan Howard, Kevin Youkilis, and Zack Greinke. Thanks a lot, Past Mark. Ya jerk.

My two biggest deals came quickly in succession, around halfway through the season. Presumably disappointed with his slow start, I flipped Longoria and Mariano Rivera for Felix Hernández. While I’m sure that I hemmed and hawed about it at the time, it was absolutely the right move. With two designated spots for RPs, Rivera was expendable. Scooping up a no-doubt ace like King Felix, a 25-year-old coming off of a Cy Young season, was just too good to pass up. I followed up that move by trading Melky Cabrera and Chris Pérez for Justin Upton. Now, before you go retroactively calling the commissioner, Cabrera was really good in 2011, trailing a guy like David Ortiz by a single point in scoring. That said, I think this worked out fairly well for me, as a 23-year-old Upton was on his way to hitting .289/.369/.529 with 31 homers and 21 steals. Between Upton and Felix, I felt like I had a foundation for the future.

My last trade flipped Greinke, along with Asdrúbal Cabrera and Jeff Karstens for Cole Hamels and Brandon McCarthy, beefing up the rotation while not exactly decimating my offensive depth. Looking back, I wasn’t thrilled with any of these deals individually (except the Upton Trade, that was dope), most likely due to my love for Votto. As a whole, though, the swaps didn’t look as bad.

One of the early keeper-league lessons I learned was that it’s really easy to get into trouble by prospect hugging. Thinking that I was way ahead of the curve on my leaguemates, I picked up Dustin Ackley and Desmond Jennings and wasted two roster spots for most of the season before they got called up in mid-June and late-July, respectively. Hitting on the next big prospect is cool, but do you know what’s really cool? Not having two spots produce literally zero points for several months.

Otherwise, I think this was the year that I unequivocally fell in love with multi-positional players, mixing and matching throughout the season. As you’ll be able to see by the final team screenshots, this led me to rostering Maicer Izturis and Juan Rivera, which actually, I would not advise.

Here’s how the final roster shaped up. I managed to earn a finals berth but fell just short of the championship (fine, “just shy” is charitable, I got smoked): 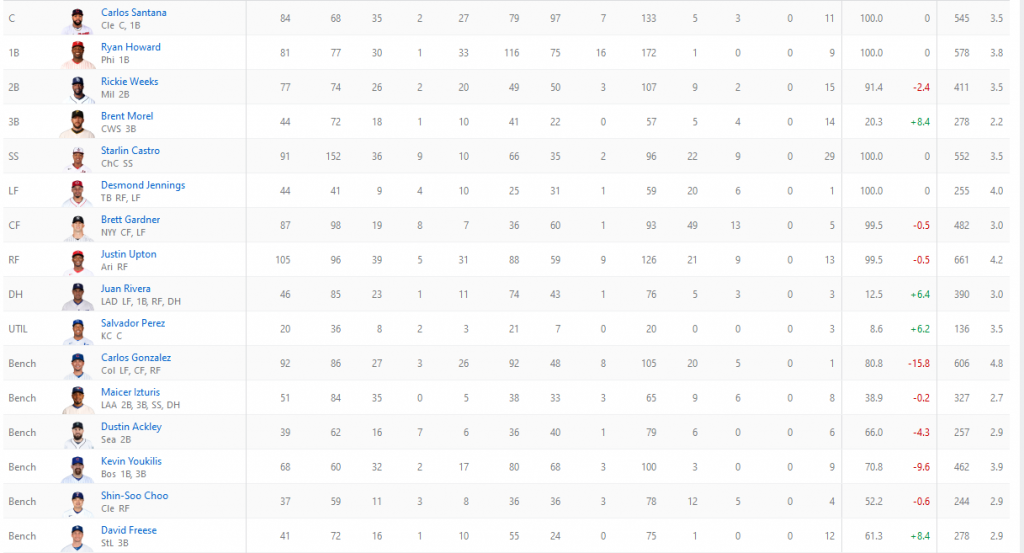 While this team fell short of a title, I did manage to draft Mike Trout in the 25th round the following season, so that worked out. Where was I? Oh yes, here’s my expert advice: If you can, I recommend drafting Mike Trout—preferably in the 25th round.