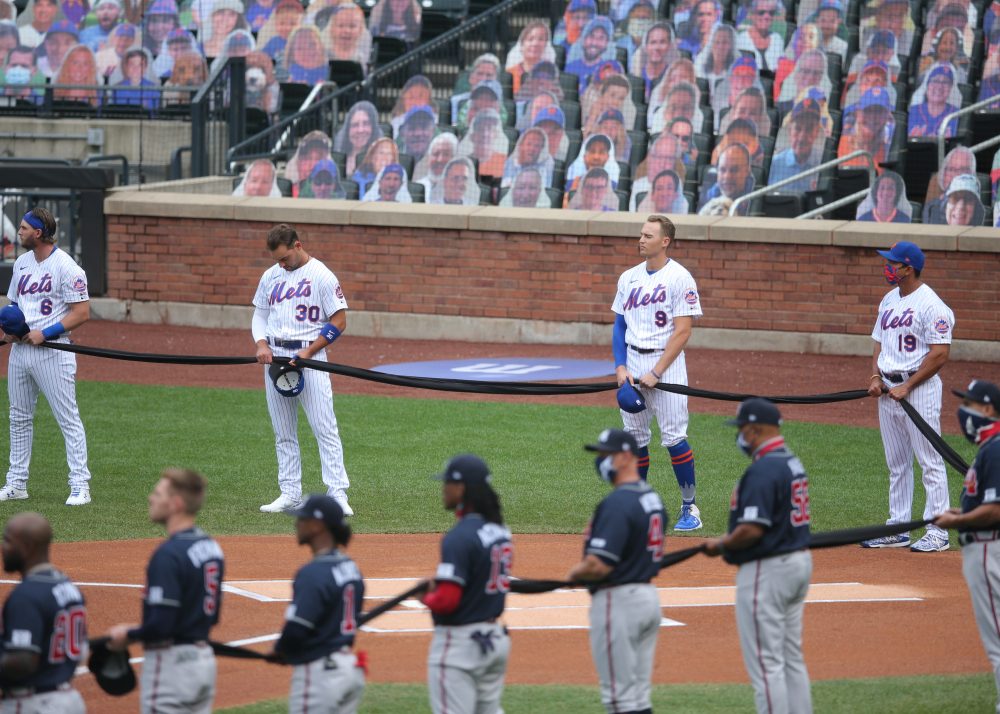 This article was originally published on July 27.

On Thursday, Major League Baseball’s 2020 season finally got underway. With the United States still very firmly in the midst of a pandemic and an uprising, all eyes were on the opening night games. As expected, Black Lives Matter—the movement, not the organization—was a part of the pregame activities. Players and coaches wore black T-shirts with “Black Lives Matter” in white lettering while taking batting practice. As a part of the league’s “pre-approved protest”, they also knelt before the anthem and played a message of unity voiced by Morgan Freeman, as well as a video made by the Players Alliance—a newly formed nonprofit comprised of current and former Black players. The MLB logo was etched on the pitcher’s mound in black with the letters “BLM.”

While on its surface, all of this may seem like Major League Baseball is moving in the right direction, it’s really just performance art. It’s worth noting that players and coaches knelt before the anthem. For a historically conservative organization with fans who are the same, kneeling before the anthem gives the appearance of a league united in a message that Black Lives Matter without angering them too much. The average baseball fan seems to believe the national anthem is a salute to our nation’s police and military and is appalled by the very idea of someone kneeling when it is played. In truth, those fans may have a point insofar as MLB’s use of the anthem has always been connected to the military and police. While some Black players still took a knee during, the collective pre-anthem kneel was clearly the league’s attempt at straddling the fence. MLB was trying to, and largely succeeded at, depoliticizing a once-meaningful form of protest.

Today is Opening Day, which means it's a great day to arrest the killers of Breonna Taylor

The next morning, the Tampa Bay Rays’ tweeted: “Today is Opening Day, which means it’s a great day to arrest the killers of Breonna Taylor.” This message was followed by a tweet announcing a $100,000 donation to local organizations fighting systemic racism. The tweet was shared hundreds of thousands of times and celebrated widely by fans and non-fans alike. They were surprised to see a baseball team—one from Florida, no less—bringing attention to the murder of Breonna Taylor. And while I do not want Breonna Taylor’s murder to be forgotten, I also do not want her murder to become a meme. And yet, it has. Tampa Bay’s social media became a corporate contributor in the memeification of a Black woman’s murder on Opening Day. You see, the very fact that calls for justice have to be made more palatable by making it a catchy internet thing is why Black Lives Matter is even a movement. When people called for justice for George Floyd, they were loud. They were clear. They were specific. And while I’d like to think the Rays are well intentioned, we must be the same way about the murders of Black women—that includes Black trans women.

In the wee hours of Saturday morning, a photo of Kyle Schwarber surfaced on Twitter. In that photo, Schwarber was pictured wearing a Chicago Police Department cap with a Black Lives Matter T-shirt. A noted supporter of first responders, Schwarber became the perfect visual of Major League Baseball: He was trying to give the appearance of supporting both sides. Considering not only recent events, but the history behind the creation of the police, one cannot “both sides” this issue.

Supporting human rights is not political.

When a fan tweeted MLB’s official Twitter account “pllllleeeeaaaseeee stop posting things like this. yes black lives do indeed matter. but it’s a polarizing topic. keep politics out of baseball!” The account fired back “Supporting human rights is not political.” Once again, people were fired up on both sides, but the league came out of it looking like it cared while missing the point. Again. While many view human rights as simply fundamental universal and moral standards, human rights are also political because that is the only way in which they are upheld. It is a political stance to believe everyone—quite literally everyone—is entitled to the same rights. And, moreover, human beings are political. We can really only exist in communities.

What MLB’s Black Lives Matter campaign lacks is bite. It lacks substance and effort. It lacks … a plan of action. T-shirts, pre-anthem kneeling, a suddenly “woke” social media team, and a video voiced by a legendary Black actor are not actually effective in fighting systemic racism. They do however, give you incredible PR. The league knows who is watching. And it knows that the people who have been taking to the streets every day for months by and large are not its main audience. Trying not to appear racist is not anti-racist, it’s a tool of both white supremacy and capitalism. It’s the devil in a new dress. There has been no clear messaging from MLB on how it plans to actually show that Black Lives Matter to it. We’ve seen no real changes—unless you count the frequency with which it tweets a picture or video of a Black player lately. Despite having weeks to prepare, we’ve only heard of the league having “meetings” and being “in discussions” about how it can improve. It’s unclear as to whether those meetings are actually happening, who is in them, and whether or not anything is being accomplished. In fact, MLB has already started to move away from its public support of Black Lives Matter. On Saturday, the mound etching was no longer the black BLM MLB logo, but FanDuel and various other advertisements. 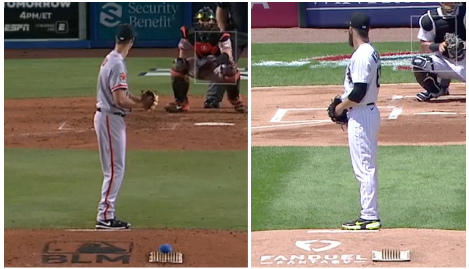 I love how the MLB went from BLM on the mound to FanDuel.

As Bryan Albin of Award Tour: The Podcast points out, “When the Kaepernick stuff first came up and the blackballing was happening, a lot of the justification for it from team sides was that ‘we cannot have Kaepernick in our locker room because it’s bad for business and it’s gonna upset people and it’s gonna lead to a loss of money.’ If there was ever a time to test that boundary and see if you can stand up for social issues and not lose the angry white people, now is the time. Because they can’t buy tickets anyway.” At a time in history when nobody is watching and yet everybody is watching, it is maddeningly fitting that the league struck out looking.