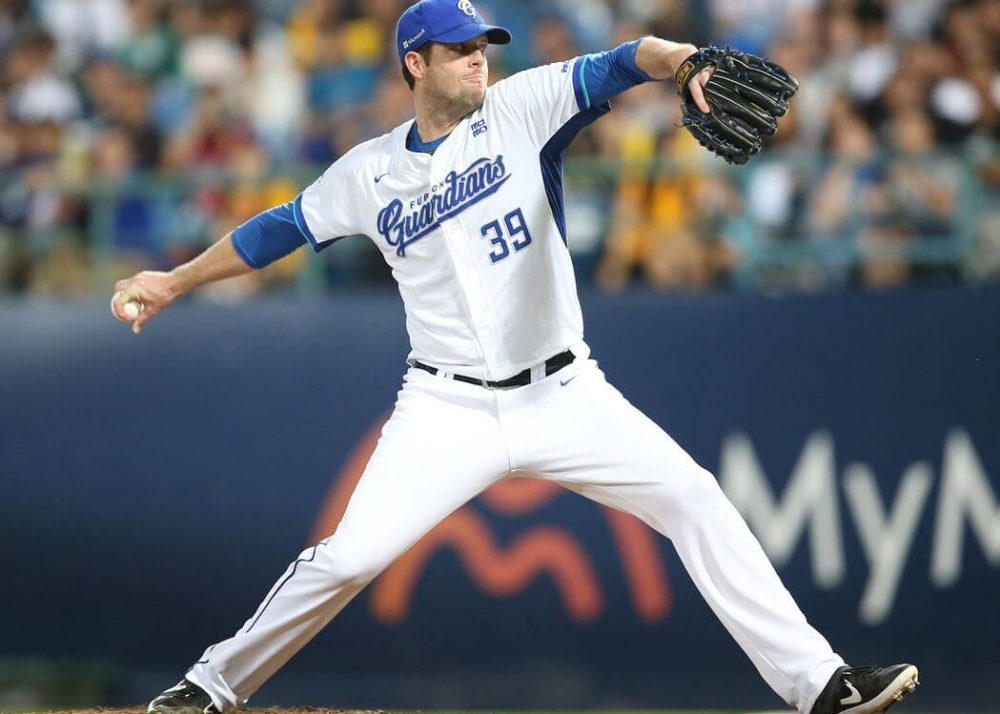 This article was originally published on May 22.

While the Major League Baseball season is suspended indefinitely, many American fans have taken an interest this season in the games that are taking place in other parts of the world. Thanks to the swift containment of the coronavirus in Taiwan, the Chinese Professional Baseball League was the first organization to resume play, in mid-April. Now, the four-team league is the only one to allow fans (albeit a limited number) to their games. Last Sunday, those fans were treated to the season debut of 33-year-old Fubon Guardians’ pitcher Mike Loree: an undistinguished minor leaguer in his American career, and the Clayton Kershaw of the CPBL.

Originally drafted out of Villanova in the 50th round of the 2007 draft by the Giants,  Loree ultimately finished his American professional career with a 3.51 ERA across parts of four minor league seasons, topping out at Double-A. After spending some time in Mexico and in the independent Atlantic League, he went to Taiwan for the first time during the 2012 season. He signed a contract with the Lamigo Monkeys, leading the CPBL in 2013 with 34 starts and 218 innings pitched, while maintaining a 3.47 ERA. After a brief stop in 2014 in Korea—where he was released from the minor league KT Wiz after they decided to give his roster spot to a younger player—Loree returned to the CPBL for the 2015 season. He picked up right where he left off, and has perennially been the class of the league.

Loree’s success hasn’t been predicating on blowing guys away with heat. If you tuned in to the Guardians’ game on Sunday, or have watched some of Loree’s starts that have been uploaded to YouTube (here, or here, or here), his fastest pitches will register in the low 140s kph, which equates to about 86-88mph. Even by CPBL standards, that’s hardly overpowering). Whereas peak Kershaw was a sculptor, hammering the strike zone and molding it to his liking, Loree is a pointillist; dotting the edges and painting the corners.

Another key aspect to Loree’s mastery is his splitter. It’s a pitch that Loree said he developed while he was still in America, and it’s now considered to be his signature offering.

Some Mike Loree splitters from his win today against the Monkeys. Loree has consistently been among the best (if not *the* best) in the league for much of the past decade. #CPBL pic.twitter.com/VsScXTnerR

Loree also uses a slider as his third pitch, and threw a handful of them on Sunday; however, it’s the fastball/splitter combo, with his elite command, that leaves so many batters standing and staring, as they would while admiring a Seurat or a Signac in a museum.

Take a look at how Loree fares compared to other pitchers in the CPBL since 2012, his debut season.

A master at work. From a player-value standpoint, Loree unsurprisingly ranks far above his peers. While it’s not as easy to find advanced metrics for CPBL data as it is for MLB, the wonderful website CPBL Stats has a pitching WAR metric, based on fielding independent pitching, that can provide further insight for us. Here is how Loree has rated in WAR in each of his full CPBL seasons (you might be able to see a pattern here).

Another element of Loree’s legacy is his longevity in the league, something that is rare among foreign players. In general, foreign players come to the CPBL after having spent much of their career in other leagues. If things go well, they might end up getting a contract in Korea or Japan (or, in some rare cases like Melvin Mora or Jerome Williams, they might find their way to the majors). But rarely do they stick in the CPBL for as long as Loree has. As this post at Not Another Baseball Blog last year surmised, Loree represents an interesting case: he’s succeeded without impressive velocity, and teams of other leagues are perhaps put off by the fact that his “stuff” isn’t as good as some other pitchers’.

Of course, nobody can argue with how he’s pitched: Loree’s win last Sunday was the 85th of his CPBL career, putting him fifth all time in CPBL history and second among foreign players—Ozzie Martinez, who pitched for the Sinon Bulls from 1997-2005, has 108. The fact that Loree, as a foreign player, has remained in the league for as long as he has is uncommon in itself; that he’s been able to dominate for as long as he has puts him on a short-list of the best pitchers in his league’s 30-year history.

Data courtesy of Baseball-Reference and CPBL Stats. Particular thanks to Rob Liu of CPBL Stats for his assistance.