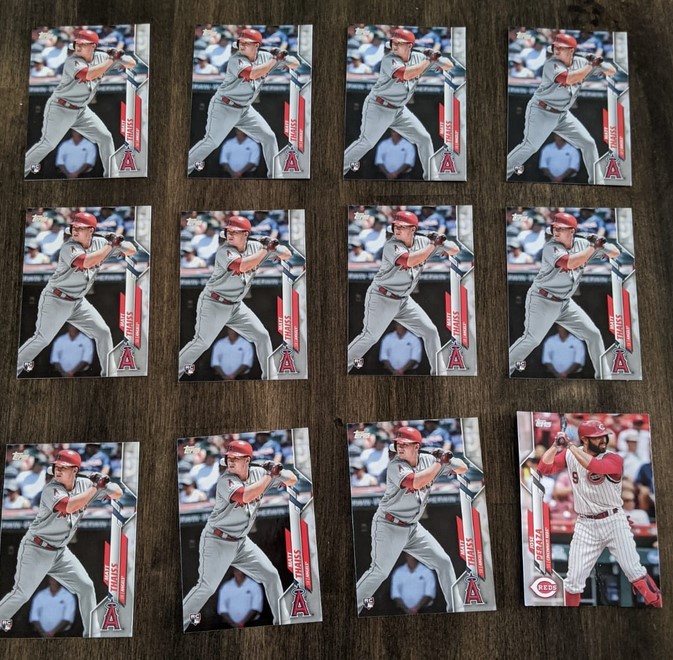 This article was originally published on April 3.

There’s more to baseball than the games.

They’re important, of course. They bring a sense of direction, concrete times to assemble, some purpose to an arbitrary set of rules. But games are just baseball’s structure, the skeleton that gives the body an outline of a form. They’re not baseball’s mind, heart, or soul.

It’s tough to not have games when we could use them most, but their absence doesn’t mean baseball is gone. It’s just changed forms, as it was bound to do for each of us anyway.

One of my best friends is named Eli. We met as freshmen in college, different in a million ways but alike in our humor, moral compasses, and love of baseball.

Over the next six-or-so years, we became quite close, morphing from complete strangers into the types of friends you lean on in your darkest and lightest hours. Baseball has never been the defining aspect of our relationship, but it’s served as a steady undercurrent. And given when our friendship blossomed, Eli’s love of the Cardinals and my love of the Red Sox meant baseball gave us plenty of fodder.

Eli and I stood outside of Fenway Park for hours together before the 2013 World Series, too poor to justify the $160 nosebleed tickets we sought but determined to acquire them anyway. Few people were happier for me than Eli when I started writing at BP. When Xander Bogaerts and Oscar Taveras were battling for top prospect honorifics, we obsessed over their every moves. Eli was the first person I called when I’d learned that Taveras died. It felt like the sort of news that should be delivered by a friend.

Eli and I remain close—he’ll speak at my wedding this fall—but he’s guilty of growing up. He moved back to St. Louis. He started a family. His job requires long, odd hours. We keep in touch, but not like we used to. It’s no one’s fault except time’s.

Baseball means different things to us based on where we are as people. When you’re a child, it’s a chance to go outside, to play with a parent, friend, or neighbor. When you’re a teen, baseball can be a healthy obsession, a means to compete. It teaches you to be gracious in defeat, and that sometimes, no matter how hard you try, things won’t go your way. But once you know real victories are rare in life, aren’t they sweeter?

In adulthood especially, baseball shifts for different people at different times. I remember reading this piece by Craig Goldstein in 2016 and thinking I’d never quite get where he was. Craig is three years older than I am, and when he wrote “Adulthood is constant and pressing, and eventually you find that spending three hours being a malcontent after a loss affects not only your day, but also those of your loved ones,” a 26-year-old me didn’t quite understand.

I do now. I’m lucky to have been born at a time when I could still feel like a kid at 26, the proverbial Large Adult Son free to do as he pleased. But the four years since have dropped the Son from that classification. I guess I’ve grown up, too. I can’t watch 162 games, can’t set my lineup every morning. Sometimes, I don’t even want to. There are appointments to keep, relationships to nurture, duties that must be done. The cat doesn’t care if I’m tired after a West Coast game. I can’t tell a colleague or a client “sorry, the bases are loaded—let me call you back.” Sometimes, it’s got to be Fixer Upper’s turn.

At this stage of my life—immersed in a career with marriage and potential fatherhood right around the corner—games are a welcome distraction. A way to turn off my brain after a hard day/week/month, a routine to settle into after work, an excuse not to go out, or not to run, or to put off laundry one more day.

That isn’t coming back, and it’s not the pandemic’s fault. As I’ve grown in the only direction that’s left to me—older—I’ve had to appreciate baseball beyond the records, box scores and stats it provides. I’ve had to learn to love baseball for what else it offers. 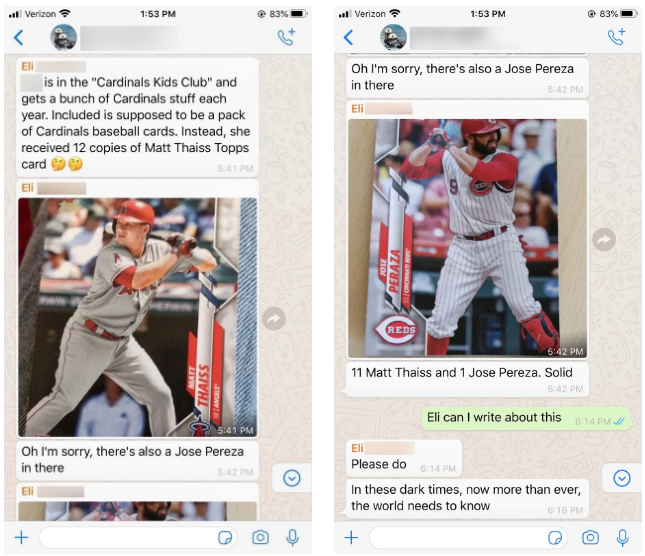 These are texts I got from Eli on Monday. His daughter is two now, though I could swear she was born yesterday. Despite her relation to Eli, she is adorable. She does not deserve 11 Matt Thaiss cards, but it seems like baseball is already teaching her that life isn’t fair.

The texts would’ve been funny regardless of the players involved—only Eli would get 11 of the same player cards in a pack—but that Peraza and Thaiss are the culprits makes this a personal chef’s kiss. Peraza has long lured me in with his siren’s song. Thaiss is the victim of another running gag between Bret Sayre, Craig, and me, an unwitting poster child for Bret’s infatuation with meaty first base-only prospects.

They say people find religion through all sorts of strange situations. I’m still not particularly compelled, but I’ll be damned if the roles Peraza and Thaiss played here didn’t make me stop and wonder. At the very least, the universe has a hell of a sense of humor.

I mentioned earlier that Eli’s job makes him work long hours. That’s because Eli is a doctor. He is on the front lines fighting, working unconscionable hours with a two-year-old at home. I’m scared for him and thankful for him all at once. Like I said, it’s no one’s fault we don’t talk as much. We just grew up.

But even in the midst of a crisis, at a time when few of Eli’s hours are his own, baseball gave him a reason to reach out. There were no highlights to share, no dingers to watch, no trades to offer. It didn’t matter. Eli knows as well as I do that their temporary absence doesn’t mean baseball itself is gone.

We’re living in a time in which each interaction outside of our homes feels like a gift—even when they come with Cardinals fans. This was not the first time Eli and I had spoken amid the pandemic—not by a long shot—but it was perhaps the first time we did so without the pandemic being the reason why. I can thank baseball for that, even if baseball isn’t really what that text was about.

It was just about connection, and at this stage in my life, that’s what baseball’s morphed into. It’s a reason to reach out to a friend for the first time in a few days, or a month, or three years. An excuse to text my mom to see what she thinks of roster moves, an unspoken apology for years of transactional mansplaining. A rallying cause to get a big group of friends together. We didn’t used to need one—we’d just always end up in the same spot somehow. But there are dogs and kids and real jobs now. We need to know to be at X place at Y time. We need a reason to congregate.

So maybe sometimes we need the games, too. I’m glad they’ll be back some day. I want the feeling Fenway gives you when you walk out from the tunnel, when you can finally smell the grass over the people and the beer. I want to watch Bogaerts hit moonshots over the Monster. I want to go to my parents house and eat too much grilled food with the game on in the background, paying it little mind but soothed by its presence.

I don’t know when I’ll get my wish. Maybe June, maybe August, maybe not until next summer. It’s a small price to pay for health. I just know I’m lucky not to need games to find comfort in baseball. All I need to do is send a text to a friend.