Two weeks ago this column looked at the graying offenses of major league baseball. Subsequently, in a series of e-mails among the Baseball Prospectus staff over the weekend, it was noted that there are a large number of pitchers age 40 and above right now. With that in mind, today’s article looks at the aging of pitching staffs, and why more hurlers are lasting into their forties.

For batters, age per plate appearance measured the average age of the majors. For pitchers, age per batter faced provides the same point of reference. (Seasonal age is used throughout this essay, the age of a player before July 1 of that year.) Age per batter faced provides a richer meaning of the makeup of rosters–it shows how managers actually use pitchers of different ages. The following graph shows Age per BFP by year from 1901 through 2007 (click for a larger image): 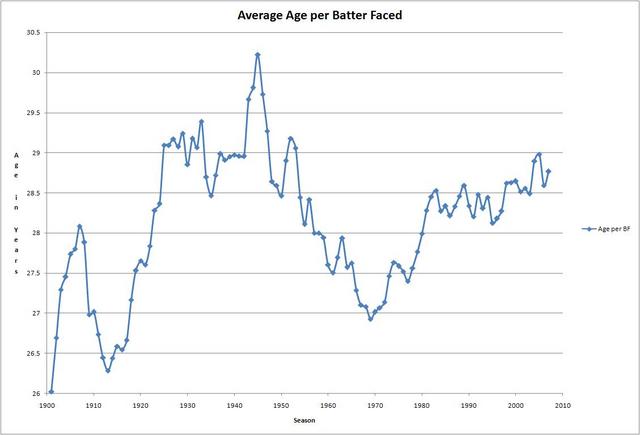 Making a comparison to the chart for batters, the trends of the two are about
the same: age went up during World War II, came down during the run-up to free
agency, and climbed again after more money became available to players. The difference is that batting age climbed steadily, while pitching age hit a plateau around
around 1981, then jumped to a new plateau in 1998. Batting age is threatening
an all-time high, while pitching age isn’t quite there yet.

The article on offense also presented a graph showing that management culled out poor players as they aged to maintain a steady level of on-base plus slugging (OPS). As it turns out, management does even a better job with pitchers. This chart looks at the number of batters faced at a certain age and the ERA for that age during the period from 1993 to 2006: 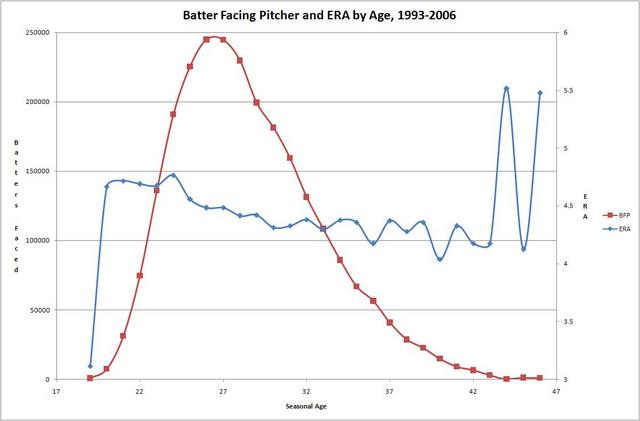 This graph provides a wealth of information. Notice that in terms of batters faced, pitchers peak earlier than hitters–pitchers aged 26 and 27 face the most batters, while batters aged 27 and 28 earn the most plate appearances. Note, too, the importance of experience–through the age of 24, pitchers appear to be learning their craft, as their ERAs are high during this time. Then, at age 25, their ERAs dip, and undulates downward until they reach the age of around 36. Pitchers who hang on into their forties are generally better than the average pitcher in his twenties. It’s an example of management doing a good job of retaining the best pitchers, even as those hurlers grow older. While pitchers peak earlier than batters, they also seem to last longer–batters who play late into their careers start showing declines as a group at age 38, while pitchers don’t show a major jump in their ERAs until reaching the age of 44.

The question raised in the opening, however, dealt with with number of pitchers 40 years and older in majors. The following graph shows the number of batters faced by pitchers 40 and over from 1946 on (to remove WWII aberrations). It also shows that data on a per-team basis, to remove increases due to expansion. 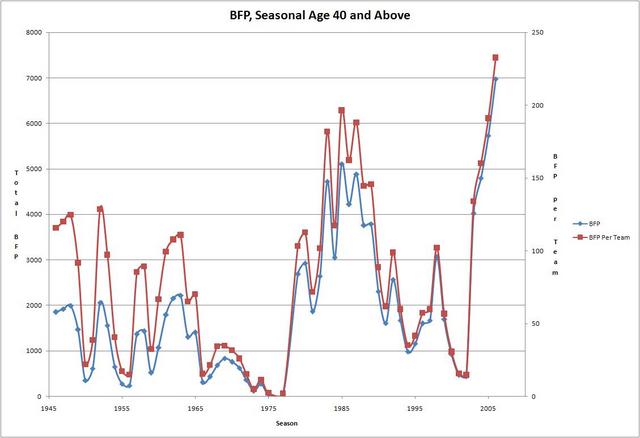 The ’50s were good and the ’80s were great for 40-year-old pitchers, but
the late 2000s look like they will surpass the best years of the previous
generation. It’s no surprise that, like the ’80s, the Aughties are going to
be known for the number of 300-game winners produced. Looking at the graph during the 1990s, it’s no wonder pundits thought baseball would never produce a 300-game winner again–pitchers weren’t sticking around long enough to reach
that milestone.

One reason suggested for the increase in old pitchers is lower workloads early in their careers. Pitchers throw fewer innings, as the use of pitch counts to manage workloads forces them out of games early. To explore this idea, look at the relationship between innings pitched before age 30 and the probability of pitching at age 40. For
this study, the subjects are pitchers who started their careers from 1946 onward
and born before July 1, 1966. This means no wars to interrupt these guys’ service time, and everyone had a chance to pitch as a 40-year-old by 2006.

The following chart plots the probability of pitching from age 40 on based a “bin” of innings. Each bin represents an increment of 500 innings (Bin 0 represents 0 to 499 innings, bin 1 represents 500 to 999 innings, etc.). The results are the opposite of what was proposed:

The more innings worked in a pitcher’s 20s, the more likely he is to pitch into his 40s. Better pitchers last longer. This idea gets reinforced when looked at in conjunction with the following chart. This graph plots the probability of pitching from age 40 on against the pitcher’s ERA in his 20s. This time, the bins are separated by one quarter of a run. As you might imagine, the pitchers with the best ERAs in their 20s have a better chance of pitching into their 40s. 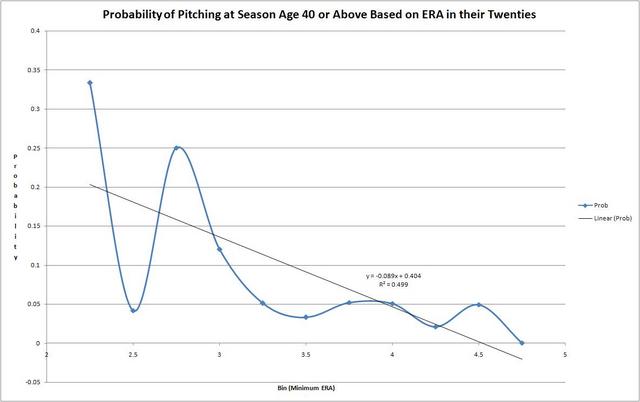 Good pitchers pitch into their 40s; they don’t break down in their 20s. Their low ERAs give them room to decline while still maintaining their value. One might expect that pitchers with great mechanics are the ones that last. Three of the today’s old pitchers (Greg Maddux, Tom Glavine and John Smoltz) all spent major chunks of their careers working with Braves pitching coach Leo Mazzone, after all. Did Rube Walker, the Mets’ pitching coach from 1968 to 1981, have something to do with Jerry Koosman, Tom Seaver and Nolan Ryan all pitching into their 40s?

What caused the dip in elder statesmen during the 1990s? Was no one teaching good mechanics in the late 1970s? My guess is that pitchers who started in the 1970s were too old when offense exploded in 1993 and couldn’t adjust. Looking at the last 30 years, it’s the dip in the 1990s that stands out, a dip from which older pitchers are only now recovering.

The current crop of players are getting older on both sides of the ball. The
offensive surge of the 1990s slowed the growth in the age of pitchers, but it is
accelerating again. Low early workloads, in terms of innings, are a contrary
indicator of future success at an old age; instead, pitchers who throw a high number of innings, and pitchers with low ERAs, are the ones most likely to pitch into their forties. It will be interesting to repeat this study in the next couple of decades to see if that trend holds.