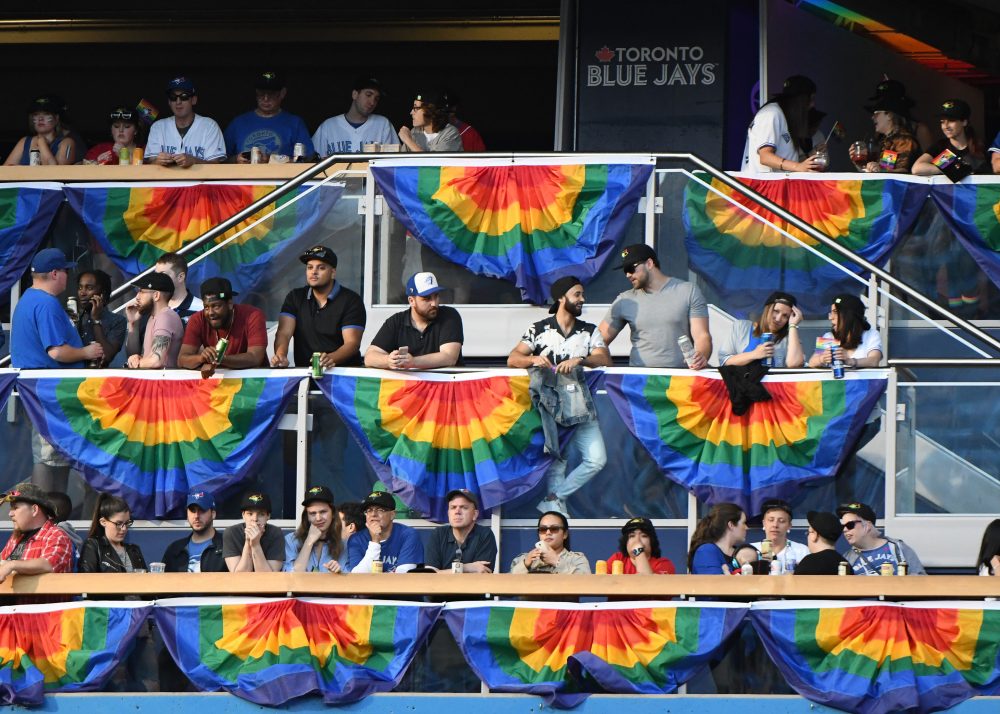 Thom Brennaman doesn’t have anything to do with making Major League Baseball better for LGBT people.

I want to say that right away. Whatever the numerous outcomes of this, beginning with the broadcaster’s on-air apology before being replaced mid-game on Wednesday and spiraling into the various donations and shows of support MLB and its clubs will make in the coming days, little of it ties to the goal of making the league, the sport, a safe place for LGBT people.

In a sense, it’s an insular problem. Culpability, responsibility here extend only so far as the contours of the Reds’ broadcast booth and the staff who control it. Brennaman’s homophobic slur was uttered with the casual comfort of someone who’s said it dozens, hundreds of times, and the proven adage about every mic being hot has the reverse implication that every off-air comment demands the attention and acquiesence of producers and staff. It’s obvious that Brennaman was speaking to someone, in calling an unnamed city “one of the fag capitals of the world.”

There will be reprovals (of Brennaman) and words of support (to the LGBT community) and restatements of the league’s commitment to the maligned party, support that while appreciated is difficult not to perceive as both preemptive and conciliatory. While Brennaman’s behavior in the booth isn’t necessarily indicative of players’ sentiment in the locker room, this has become something of an annual occurrence, with previous instances taking place on the field. Old homophobic tweets of players endlessly resurface. It’s hard to say MLB is a wholly welcoming environment for members of the LGBT community. It’s been a simmering player-level issue for decades. While it goes beyond this, the problem can be summed pithily: MLB has never had an active player publicly acknowledge being gay, and that best-known example of a player who was close to doing so is a tragedy.

It’s taken a long time for the league to acknowledge his legacy, but MLB’s first openly gay player debuted in 1976: His name was Glenn Burke. Coming up in the Dodgers’ minor-league system, Burke was highly regarded: Dusty Baker said, “He was built like a young Willie Mays.” As Burke broke into the majors in the 1976 and 1977 seasons, he quickly became a popular member of the team’s clubhouse. Burke is purported to have invented the high-five in congratulating Baker on becoming the fourth member of that 1977 team to hit 30 home runs.

By the beginning of the 1978 season Burke’s sexuality became something like common knowledge among teammates. For his part the outfielder appeared to make little effort to conceal his identity. In a 1994 interview, published about half a year before his 1995 death, Burke said, “being Black and gay made me tougher … I had to be tough to make it. Yeah, I’m proud of what I did. I knew one day they would find out.” Burke claimed that Dodgers vice president Al Campanis offered him $75,000 to hold a wedding. Burke is reported to have responded, “I guess you mean to a woman?” Early in the 1978 season he was traded to the Oakland A’s, in a move widely understood to be related to his sexuality and panned by the clubhouse.

Facing mounting slurs from spectators, Burke walked away from the A’s after suffering a neck injury in the 1979 season. The team offered him a contract for the 1980 season, the same year Billy Martin took over as manager. Martin is reported, by the 2010 documentary Out: The Glenn Burke Story, to have introduced Burke as follows:

Oh, by the way, this is Glenn Burke, and he’s a faggot.

It isn’t a toothless word. This was, as Billy Bean (the only other former MLB player to have come out as gay) points out in the documentary, a time when homophobia was rising dramatically nationwide. After suffering a knee injury in spring training and being demoted to the minor leagues, Burke could see no way back to the majors through the virulently homophobic Martin and retired at 27 years old. Burke came out publicly in a 1982 Inside Sports article, the same year he won two gold medals in the first Gay Games. Burke had more to contribute on the field, but he said:

“It got to the point where prejudice just won out … The Dodgers got rid of me, and everyone on the team knew why. Billy Martin didn’t want no part of me, and no one else would sign me. I just got blackballed. They didn’t want nothing to do with me. A gay man in baseball? Uh, uh. No way.”

It’s a complicated question: How can MLB pave the way for gay athletes to not simply exist in the sport (they do), but to feel comfortable publicly claiming their identity while actively participating in games? It’s not a problem solely of MLB’s making or of its volition to solve; there are literally theses on the straight coding inherent to men’s sports. Gay athletes are becoming more common in women’s sports because being a woman athlete is already coded as a transgression against femininity. Conversely, men in professional sports are perceived as exemplars of (straight, often white) masculinity. To be gay has long been seen as the ultimate transgression of that ethos, expressions of homophobia a simple way to indicate one’s contrasting masculinity. In her 2007 book Whipping Girl, Julia Serrano wrote:

“Male pride is not really about pride. It’s about fear – the fear of being seen as feminine. And that’s why “girl stuff”* is so dangerous. And as long as most men remain deathly afraid of it, they’ll continue to take it out on the rest of us.”

*Being gay is “girl stuff,” as ludicrous as the notion appears when spelled out.

Despite the coming dialogue, the words of a suspended announcer aren’t an overarching reflection on MLB in a direct sense. But Wednesday’s uproar reaffirms that a significant portion of the league’s fanbase is dissatisfied with the league’s support of LGBT people. The spotlight is on the league and might remain so, or at the very least serve as another bit of the “precedent” of which Rob Manfred’s office is so enamored.

A broadcaster is quite literally platformed, compensated for their words in the same fashion a writer is (just at a more advantageous rate). Their values are fused to the accounts they provide. It should come as little surprise to see the megaphone quickly pulled out of the guided speaker’s hand when he stepped out of line. To take the situation at its most cynical, Brennaman is not directly producing value for the team in the same way a widely unpopular pitcher might. He may as well be a hitting coach.

Fostering a welcoming environment entails more than refusing to condone. It requires construction, not just the avoidance of destruction. Brennaman might not be inherently representative of the players on the field, but his white, straight, cis profile is overrated by scouts, overrepresented in front offices and in dugout staff. He’s playing to the home crowd, as it were, with no fans. There are increasing examples of players speaking out for the LGBT community, but it will take more concrete, sincere efforts to create an atmosphere where a player could come out without fear for their career.

This isn’t about Thom Brennaman, it’s about the LGBT community. He made it about them, threw an ugly spotlight on how MLB has failed and continues to fail them. If MLB wants to change the story, it has to write a new chapter.

You need to be logged in to comment. Login or Subscribe
essman54
Billy Beane is the Oakland exec. Billy Bean is the gay former player.
Reply to essman54
Craig Goldstein
Right you are. Apologies for that mistake. Thanks for the correction.
Reply to Craig
Andrew Nall
Great article.
Reply to Andrew
Ginny Searle
Thanks Andrew!
Reply to Ginny
dodger300
In Brenneman's forced apology he said "That is not who I am." Of course, that begs the question, "Then where in the world did it come from, Thom, if it's not who you are?"
Reply to dodger300
bobgale
Dodger300, I thought the exact same thing. That particular comment was more than a little disingenuous. It also raises the question in my mind of who was he speaking to, and sharing his precious tidbit with? Someone who wasn't exactly uncomfortable hearing that venomous crap, I'm guessing. So much for the Brenneman legacy, at any rate. That's been re-written.
Reply to bobgale
Great article.
Reply to noonante
Ginny Searle
Thank you!
Reply to Ginny
H
Because Brennaman is white he's playing to the "home crowd" in making asinine hot mike comments? It seems to me that if you want to make this point you need to look at more specific descriptors. Multi-generational baseball lifer? What about the frequently discussed "MLB ivy league culture influx?" Does Brennaman fit into the culture Chicago White Sox vice president Ken Williams describes? Is this a relevant distinction when hitting on "support of LGBTQ" communities? I'm struggling to see why race should be the obviously relevant variable here (just as I'm not sure this alternative lens captures what we want to capture). Anyways, wouldn't a basic perusal of the existence of modern culture war discourse and the stereotypical "thanksgiving dinner political fights" disabuse one of the notion that white people (or even "straight white people") feel like they're at home talking about cultural issues with someone who only share the same racial background?
Reply to H
Maureen Mielke
Maybe Thom was referring to the cigarette capital of England?
Reply to Maureen
Maureen Mielke
Looking at Glenn Burkes stats he wasn't really a good Major Leaguer not to ignore to discriminatory treatment but I doubt he would have been let go by the Dodgers if had better than a 57 career ops+
Reply to Maureen
dennis paulik
Ginny, what is it that MLB could do to make a difference? It feels like you are suggesting a first step would be for a player to come out as being gay and being accepted by the team and the public. Kind of a Jackie Robinson for LGBTQ community. That is a big burden for an individual so what else are you asking to be done?
Reply to dennis