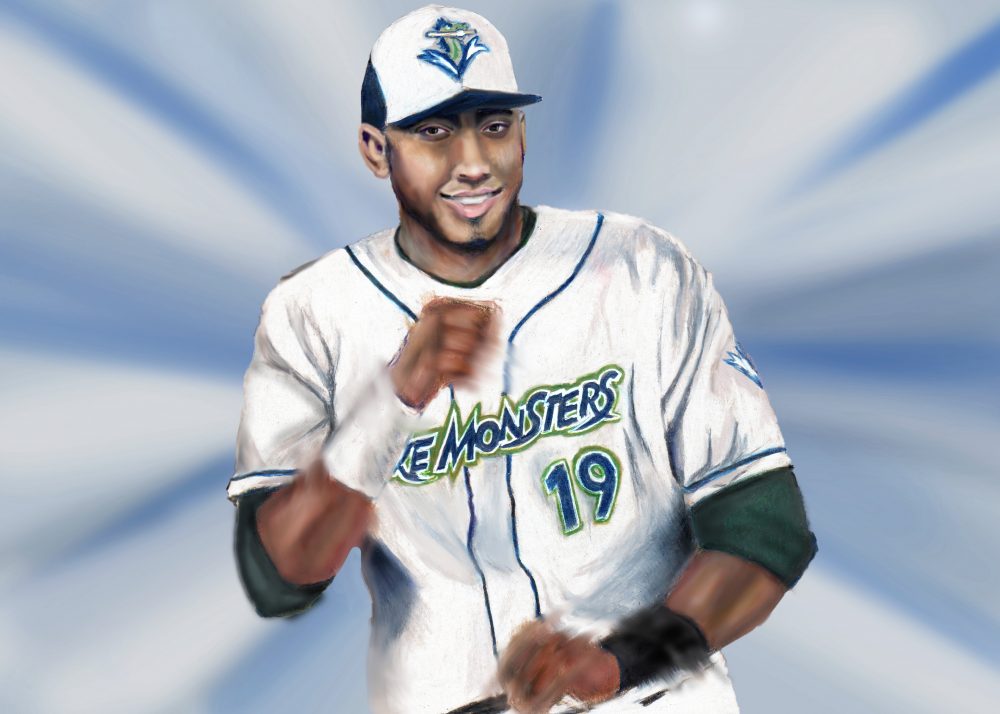 Every Tuesday and Thursday, Too Far From Town shines a light on the 42 (really 43) minor league baseball teams in danger of losing their major league baseball affiliations, effectively leaving them for dead. Today we focus on the Vermont Lake Monsters, a Short-Season Class-A affiliate of the Oakland Athletics. You could take in the previous installments here.

The 2012 Vermont Lake Monsters team that finished 10 games under .500 featured an impressive number of future major leaguers for a short-season single-A squad. Daniel Robertson, Ryan Dull, Michael Ynoa, Bruce Maxwell, Addison Russell, Chris Bostick, and Matt Olson in a four-game cameo all wore Lake Monster uniforms that year in Burlington. But out of all of those players, only #20, Chris Bostick, appeared in the team’s dance video.

Appearing for about 12 seconds, popping in with a smile on the right corner to make it a dancing trio at the 43 second mark, is the kid who wore #19, one number below Chris Bostick. His name was Miguel Alejandro Marte. He was signed as an outfielder, but was converted into a catcher and first baseman. He was born on August 29, 1989 in the Dominican Republic city of Santiago. He died on April 28, 2020 in New Jersey due to complications from COVID-19. He was 30 years old. He left behind his wife Jasmin, his daughter Isabella, and his son Miguel Angel. A GoFundMe set up for them raised more than double of the stated $5,000 goal.

The 2012 Lake Monsters was the fourth and final pro team Miguel Marte played for in his baseball career. By 2020, he was working as a truck driver for an appliance store. Miguel and Jasmin dreamed of one day opening up a Dominican food restaurant. We asked one of his 2012 teammates, reliever Cecil Tanner, if he had a particular memory of Miguel from that year.

My favorite memory was when we went to play the Yankees in Staten Island — he had a big group of family and friends come watch him the first night, very cool to see how much support and love he had. The next night, after the game, he took us American guys to a local authentic Dominican spot that he recommended and hosted us and told us all what to order.

Oakland A’s director of player development Keith Lieppman told the San Francisco Chronicle of how helpful Marte was with translating instructions from the coaches to the Latin Lake Monsters. “He was a bit of a fatherly figure for the players.”

University of Arkansas pitcher Nolan Sanburn was the Oakland Athletics’ 2nd round draft pick in 2012. Sanburn had a story for us about Miguel Marte that he said he liked to tell at parties.

I signed late and was recently promoted to Vermont. I don’t know any Spanish. I was pitching and Miguel was playing first. I threw 4 balls in a row and walked the guy. The Dominican catcher came to the mound and called Miguel over. Then these two guys start jawing back and forth while I just stand there having no clue what’s going on. After about 10 seconds, the catcher slaps me on the butt and runs back to plate without saying one word. Miguel looks at me, no telling what he was thinking but said in his broken English, “he told you to throw a strike.” And ran back to first. So I stood there and thought, alright got it, so THAT’S what I’m supposed to be doing out here!

After someone passes away, the living tend to turn the deceased from the complex human being they really were to a feeling. The same feeling came up again and again from Marte’s Vermont teammates.

He was a wonderful kid, always had a smile on his face.

Miguel was one of the funniest guys around. Always had a smile on his face and cutting up and laughing. A bright spot in a dark world. A great man and a great guy. He is missed.

He was a happy go lucky kid. Worked hard, loved baseball and had some skill.

I remember him being a fun, gracious and loving teammate who loved the game and loved having fun!

He was the definition of the big guy big heart teammate. Always had a smile on his face. You knew when you saw him he was going to brighten your day and give you a big welcome.

You could have figured all of that from Miguel’s dancing from just those dozen seconds. I doubt the players we spoke to, or any of his other teammates remember the video. As of this writing it only has 80 views on YouTube. It’s clear the players were all recorded busting moves individually.

From the start, Miguel is looking off camera to his left, wondering if they started shooting yet as he smiles and moves his shoulders just in case. He looks off to his right, takes a step back, then gets back to dancing. His hips join his shoulders in kinetic celebration. He again looks off camera, head lowered, making more of a shrugging motion than before, his face hidden, still moving to some beat, his smile the only thing you see of his face, the smile that never left. He then straightens his back. He looks again just off to his left, to the person recording him. His dancing for the camera is done for the day. He is still smiling. Then he’s gone.

You need to be logged in to comment. Login or Subscribe
workermonkey
I grew up just 20 minutes outside of Burlington VT, as a kid up there, cable TV wasn't an option 35 years ago (actually still isn't at my parents house but satellite is now!) the only way i could see baseball live was lake monster games, the occasional trip to grandparents to see nationally televised games, or the super rare trip up to Montreal. If this team leaves its hours to the closest real life game from Burlington. It would be better if a team comes back to Montreal but that's still a pipe dream.

I'll also never forget watching Ken Griffey Jr run wild in this outfield. Griffey played up there for a full season i believe. i'll never forget as a kid going to summer baseball camps at the field and throwing myself against the right field wall after fly balls like i'd seen Griffey do a few nights prior. It certainly isn't just 2012 when some real talent came though northern Vermont.

I'm a life long baseball fan from some of these games and experiences. I was fortunate enough that my parents encouraged it and spent the time and money to take me to games and camps. It certainly won't be the same if the Lake Monsters leave. My sister still lives in the area and teaches elementary school, they still take kids to games all the time. In the past two years, she's gotten a Peruvian friend of hers with no baseball experience to join her at Lake Monster games with her family and now they're hooked with a young son of their own.

For 20$ you can get seats and hot dogs for the family. its hard to beat that kind of family fun value proposition for young families and its certainly bringing new fans to the sport. Burlington is also one of only two minor league stadiums where people have just handed me free tickets as i stand around outside waiting for someone (the other being New Britain, CT). Great People, great team and great city, it'd be a shame to lose baseball in VT.
Reply to workermonkey
mbc
Three authors for this article, and clearly they know nothing of Vermont. I guess we deserve to lose our team? This was disappointing. WorkerMonkey wrote a better comment than the actual article.
Reply to mbc
Craig Goldstein
The entire series was done to draw attention to these teams being imperiled. I'd argue the point was to say no team should be lost.
Reply to Craig