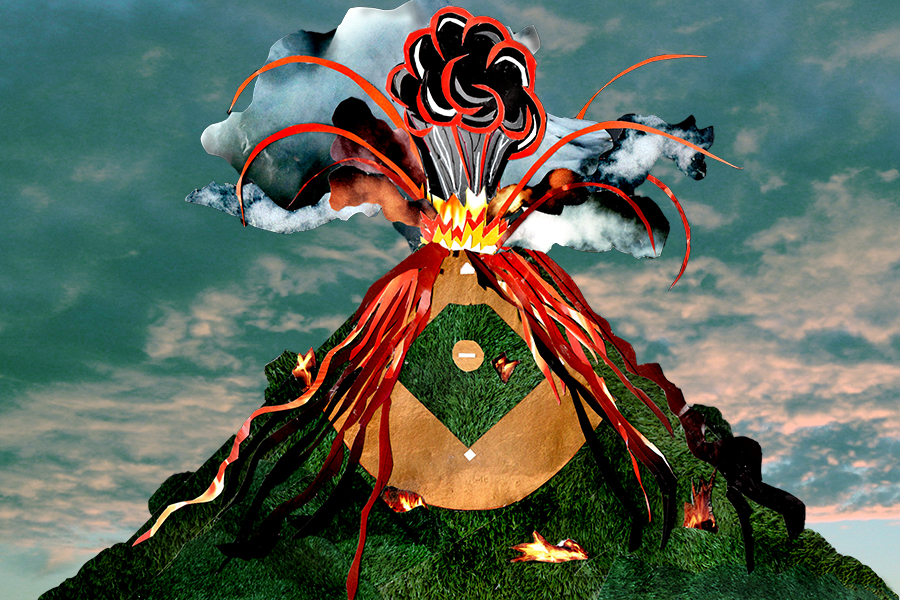 Every Tuesday and Thursday, Too Far From Town shines a light on the 42 (really 43) minor league baseball teams in danger of losing their major league baseball affiliations, effectively leaving them for dead. Today we focus on the Salem-Keizer Volcanoes, a Short-Season Single-A affiliate of the San Francisco Giants. You could take in the previous installments here.

That July 1980 afternoon was a waking nightmare, when the Bellingham Mariners lefty by the name of Krueger sliced and diced the Salem Senators, putting them to sleep by a score of 8-0. The Senators, including centerfielder Bobby Bloodsaw, tried of course, but Bloodsaw among other things was caught trying to steal second base. Bloodsaw failed to strike fear in his opponent, despite his speed demon status.

Salem foolishly released Bloodsaw, unleashed him out to the world two weeks later. Bloodsaw never forgot, seemingly taking out his vengeance upon Salem, Ore. and Keizer, Ore., and Salem-Keizer Ore. conglomerations. The spirit of Bobby Bloodsaw reads the papers, was doing so in 1982 when Keizer voted to incorporate because enough of its denizens didn’t care for the possibility of Salem annexing their asses, and as someone put it at the time to “shed their Salem stepchild image”.

Bloodsaw lives on in Salem-Keizer Volcanoes mascot Crater. To say Crater is the most horrifying mascot in organized baseball would be as easy as falling off a log engulfed in flames. Here he is, explaining how long his poking stick is: 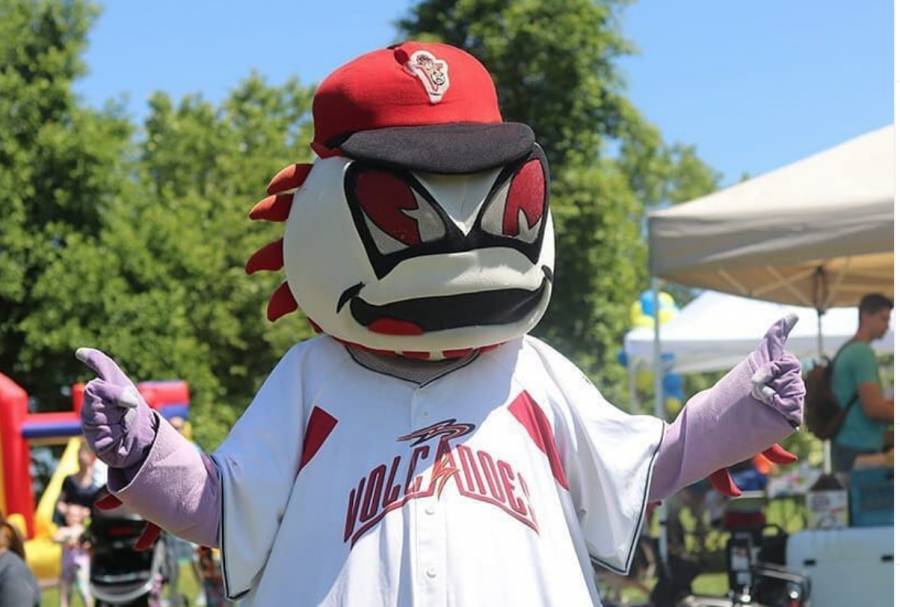 An urban legend I am making up as I go along, therefore it has never been proven to be false and thus must be true, claims the lava red in Crater’s eyes is literal magma from a volcano generated from Bobby Bloodsaw’s pure, passionate love of Staind and cutting people off in traffic. Fortunately Crater can be sedated if he is parked in front of a giant screen playing Mario Kart.

This is good to know when you rent out Volcanoes Stadium on Airbnb.

$1,057 a night sounds steep, but you can have up to 16 guests, and 16 divided by $1,057 equals a friggin’ steal. Granted, Volcanoes co-owner Jerry Walker, known in Airbnb parlance as “Superhost” Jerry, sidesteps the whole “Where will I sleep?” issue with the standalone sentence “Bring your sleeping bags to maximize use – we also have a dozen cots”, and when he talks of the clubhouse you could hang out in and pretend to give rote answers to your friends wearing hats with a card that reads ‘Press’ on it, he claims Buster Posey stepped foot in there, when come on, Posey only played three games for the Volcanoes.

Why no love for Mark Hallberg, the Volcanoes’ manager in 2019 who got promoted to the parent club San Francisco Giants in 2020? Hallberg was the reason why Posey switched from shortstop to catcher at Florida State in the first place. And it’s not like Posey is furious at Hallberg for it — Posey told the organization they should hire his college teammate and one of the groomsmen at his wedding if they were intelligent folk.

There are plenty of other very good questions. Does the Airbnb stay include the three vendors who offered fans acapella renditions of “My Girl,” “Lean on Me,” and a rap they wrote? Will visitors have to concede the field for multiple hours while Hilander Dental splits a doubleheader again? Could Payne Patchett, the Volcanoes announcer last year even though he had just graduated from Lake Stevens High School, call a game? If some of the more, let’s call it adventurous guests decide to climb the tree past the left field fence named the Bart Tree, to more or less experience and figure exactly how far Joey Bart hit a baseball a few years ago, could six-foot 11 ½-inch Volcanoes pitcher Sean Hjelle swing by get them down? Will Superhost Jerry tell you what Salem-Keizer has against Bellingham, Wash. anyway?

That’s right — you didn’t hear Scotty Krueger’s side of the story.

Tobacco and candy magnate George E. Waters bought a Bellingham minor league franchise and moved it to Salem in 1940, then built a stadium for them so they wouldn’t have to play on the street. Waters died six months later, his widow blaming the stress of baseball on his heart attack (but strangely enough not the tobacco nor candy.) Salem teams for the most part played as Dodgers and Angels affiliates over the years. Bo Bichette’s father was a Salem Angel in 1985. I hear he made a difference. 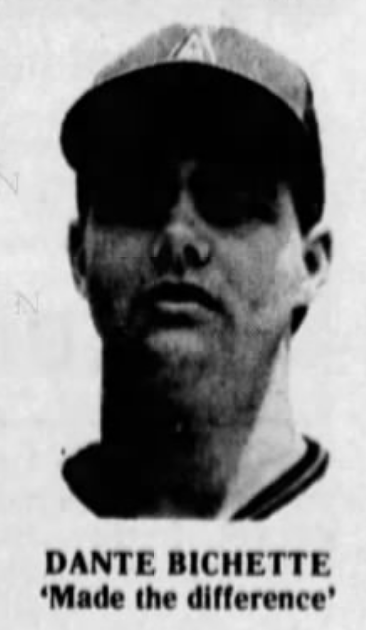 Mike Piazza was a Salem Dodger in 1989. At least once, a team opted to intentionally walk the guy in front of Piazza, and the future Hall-of-Famer made them pay. 1989 was a long time ago.

In the same year Mike Piazza got disrespected like that for presumably the last time, the Dodgers moved their Salem team to Wakima, Wash., and Superhost Jerry Walker and New York lawyer Bill Tucker bought the Bellingham Mariners. Walker, a real estate mogul from Everett, Wash. first met Tucker at the Mickey Mantle/Whitey Ford Fantasy Baseball Camp in Ft. Lauderdale, Fla., at least according to the Tucker-penned book D.P. [for divine providence] – Or Billy and Jerry in the Promised Land. The two definitely could have used some more publicity. 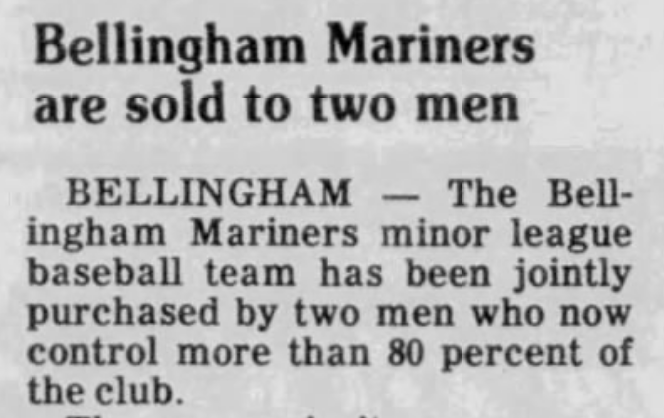 Walker and Tucker finalized the deal for the Bellingham Mariners on Opening Day. They found out their GM resigned when a reporter asked them about it, likely all the more amusing considering the two were wearing tuxedos at the time. They searched all over the stadium to figure out how to turn on the lights — Tucker told The New York Times the main light switch turned out to be in the women’s bathroom. In 1997 the two fulfilled the destiny of every Bellingham, Wash. franchise and moved to Salem, Ore.

Yes, technically Keizer, Ore. Salem is in the name of the team. The two share a school district. The parallel works.

Tucker said they changed their nickname for press-related reasons, naturally. “We figured it would make for great headlines — ‘Volcanoes Erupt!’” (Jerry bought out a retiring Tucker in 2015.)

The night Volcanoes Stadium opened, the mayor of Keizer helicoptered into the stadium and threw out the first pitch. Nearly 5,000 people showed up. The game was rained out. 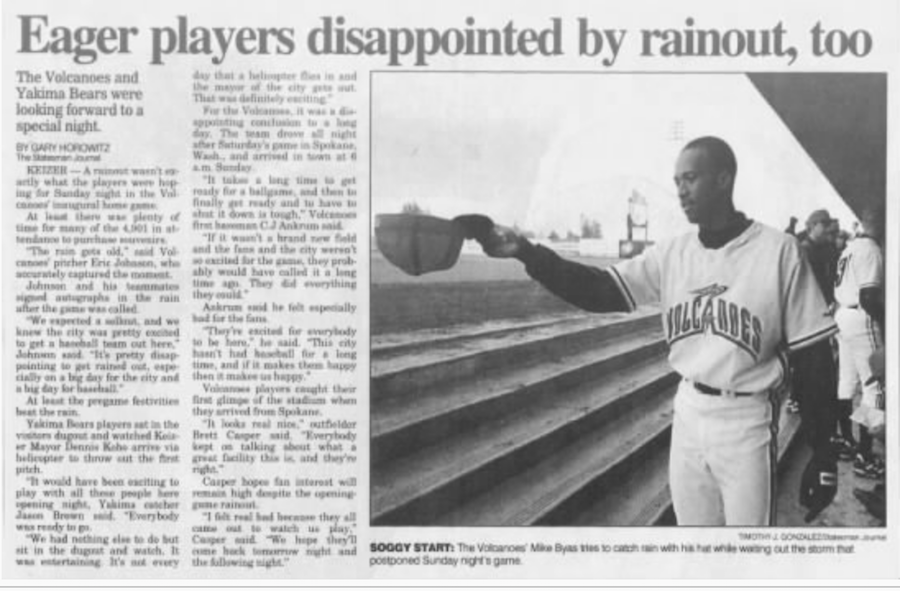 Bloodsaw/Crater would not always be able to work their evil ways on the franchise — the Volcanoes won five Northwest League championships over the years, albeit not since 2009. It’s debatable if they were involved with the eclipse of 2017. The team purposely scheduled their August 18th game at 9:30 a.m. to have the first known “eclipse delay” in baseball history.

“I cried like a baby,” one spectator said. There was something beautiful in a light getting extinguished for reasons unknown to mostly all. It was special, a moment when people realized they were a part of something bigger than they could possibly imagine. But things are no longer special when they stop being rare.