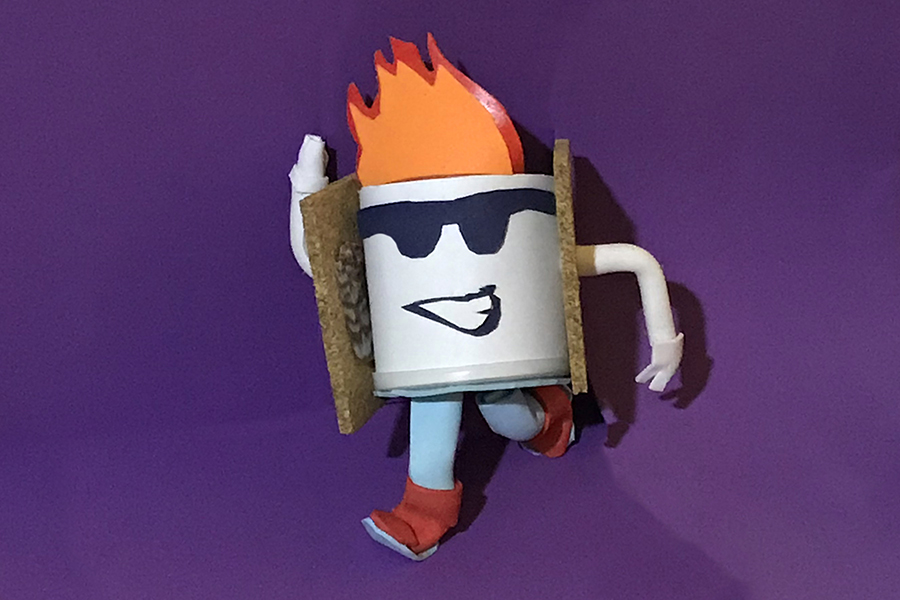 Every Tuesday and Thursday, Too Far From Town shines a light on the 42 (really 43) minor league baseball teams in danger of losing their major league baseball affiliations, effectively leaving them for dead. Today we focus on the Rocky Mountain Vibes, a Rookie-level affiliate of the Milwaukee Brewers. You could take in the previous installments here.

Well this is awkward.

I wrote about the Rocky Mountain Vibes last September. I would love for you to read the whole shebang if you haven’t yet, but I’ll tell you the TL;DR version because I’m a nice guy. I took umbrage with the Vibes name and #brand. They were monetizing positivity, and as a clinically depressed person, it made me fairly angry. Things have changed for me personally almost a full year later. Okay yes, the same is true with all of you on planet Earth, but since that piece was published I went back to therapy and became Zoloft brothers with Zack Greinke. (I started taking the Sertraline in late February, ensuring I can never claim to have bad timing ever again.) Therapy, medication, exercise, occasional meditation, and not being on social media so damn much (until baseball season) has done wonders. If you are like 2019 me, still whining that therapy and medication must be too expensive because you are not insured without actually bothering to use the google machine to confirm your assumptions, I kindly suggest looking into talk therapy at a local college, and getting acquainted with the GoodRx app. Life is by no means perfect, and it never will be, but it could be manageable. There might be a bit of a lag hearing back from universities’ medical centers right now, but hang in there kitties.

Meanwhile back at the ranch, while I still believe everything I wrote last year, I acknowledge it was not exactly “groovy” of me. And I never wanted the Rocky Mountain Vibes to go away after just one season. I’m 99 percent sure the Vibes’ endangered status has nothing to do with my piece, but just in case, it is only fair to look at the franchise through a more positive lens. 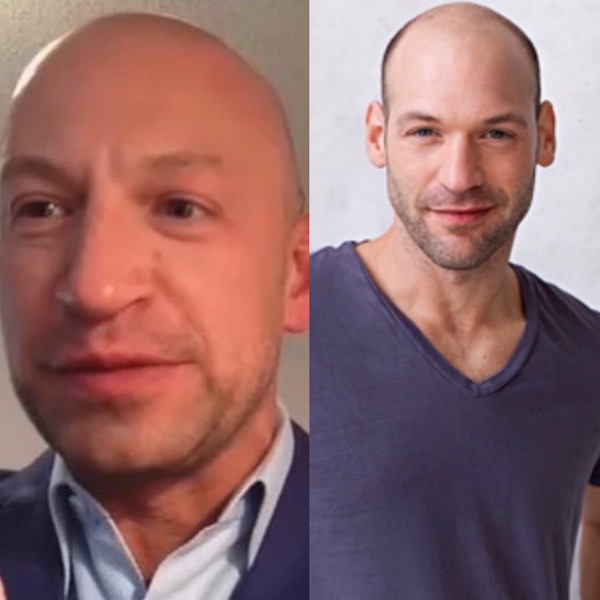 This past spring, Phillips came up with “Toasty’s Takeout”, a three-times-a-week curbside food business at UCHealth Park, starring the $35 “Quarantined Couple” meal, featuring chicken bacon ranch and pulled pork sandwiches, fries, cookies, a bottle of wine, and the pièce de résistance, two rolls of toilet paper. Toasty — oh, did I not bring up the anthropomorphic sunglasses wearing s’more mascot Toasty Vibes? I thought everyone knew. Toasty was wearing a mask. Kudos to Toasty, the s’more constantly on fire and hungover you can love and respect during COVID-19.

During the 7th inning of the Vibes’ first ever home game, fans chanted “We want s’mores!”, which is objectively cute (even though the Vibes did not score s’more runs to win), so another point for Toasty.

Good ol’ Toasty is also willing to play along with the local newscaster’s pandemic robe bit (while still wearing a mask!) 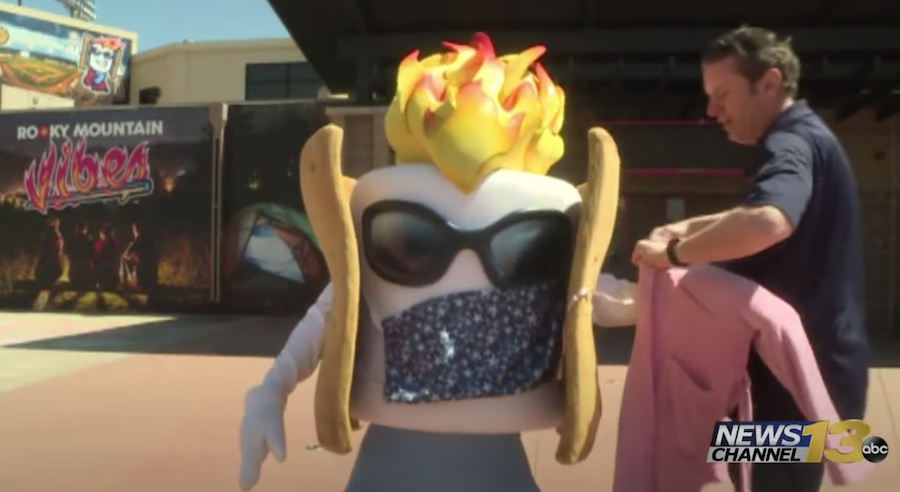 Spelling out POSITIVE VIBES with baseballs in the outfield and having a drone record it? Reminds me of the penultimate shot of the M*A*S*H series finale. Only the highest-rated episode of television in history. 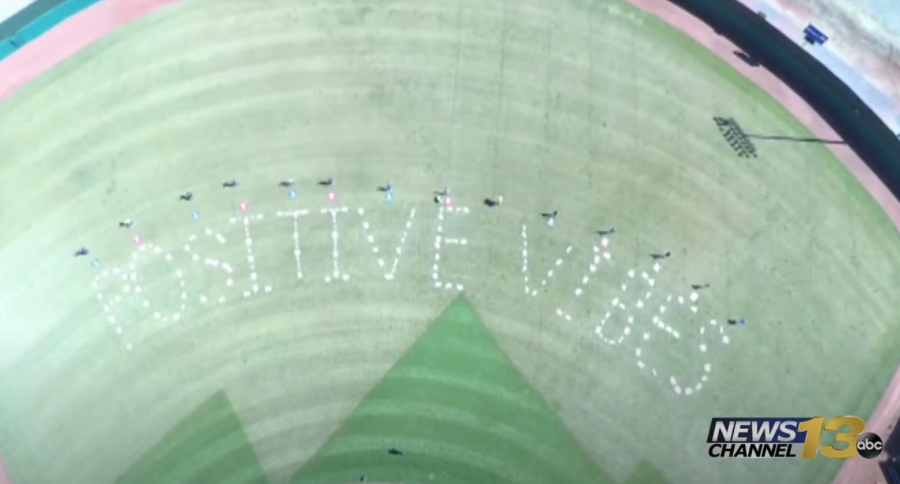 The Vibes placed these signs in local hospitals. No drones necessary there. Four tiny Toastys on each corner of the signs apparently was. Fine by me! 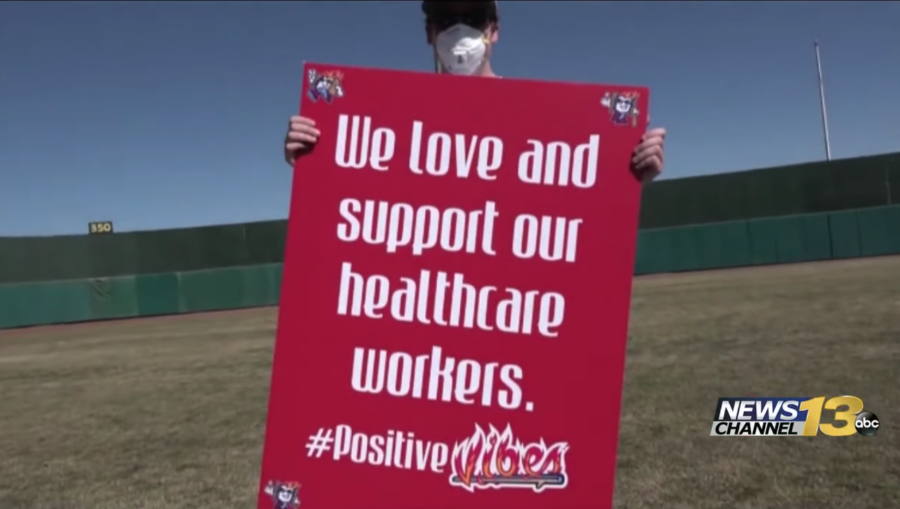 The Vista Ridge, Sand Creek, and Falcon High School classes of 2020 all graduated on the field, all livestreamed. The Vibes took part in Colorado Springs’ “Be the Light” tribute to those students. While it was suggested to residents to leave their porch lights on from 8:20-9:20 p.m. on the designated early Thursday evening, the Vibes illuminated UCHealth Park. Not sure if the youths in the Energy Club appreciated the gesture, but they got into good colleges and they’ll get over it. Speaking of college, the Colorado Springs Outlaws of the Rocky Mountain Baseball League, described by the Denver Post as “Colorado’s top collegiate summer baseball league”, are playing their home games this summer at UCHealth since the Vibes won’t be using it, after the Outlaws promised they wouldn’t live up to their name and follow safety protocols.

The Vibes were the first of now several minor league teams that hold drive-in movie theater nights in their stadium. The first film they screened was Back to the Future. Guess who greeted folks into the only cineplex. No, not Dick Cavett. Your favorite s’more. 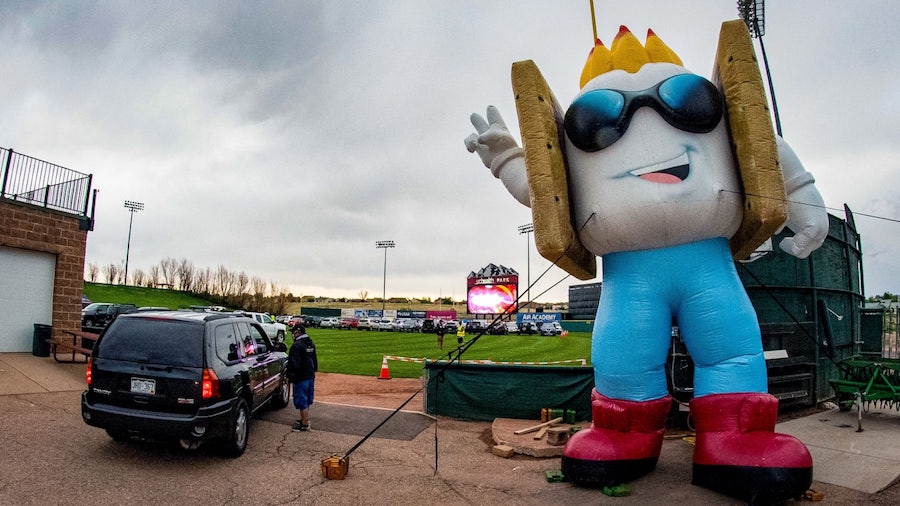 To celebrate the 4th of July, the Vibes showed The Sandlot, Independence Day, and then shot off some fireworks. Some people actually like fireworks! I don’t know them personally but how else would the fireworks industry still be alive and kicking?

One person who might want to know the answer to that question is Rai Henniger. Henniger was the longtime senior vice president of marketing and promotions of the Triple-A Colorado Springs Sky Sox, the team that played at UCHealth Park from 1988-2018. Once the team became the first in the United States to promise fireworks for every game, Henniger became a licensed pyrotechnician and got a federal explosives license. Things went as planned the first thousand or so times Henniger worked the explosives. On around the 1001st, there was a major accident. Henniger, I think jokingly, claimed 11 years after it happened that part of his frontal lobe was still behind the scoreboard. After he survived after doctors literally gave him a one percent chance to live, underwent 20 operations, including at least one where he got a new nose constructed from one of his ribs, he developed a certain perspective on life.

Luckily, we don’t know what’s coming, because you wouldn’t want to go on. But every day’s precious, and I feel grateful for every breath I’ve got.

The naming of the team as the Rocky Mountain Vibes was a surprise. It was earlier announced the five finalists for the nicknames were the Happy Campers, Lamb Chops, Punchy Pikas, Throttle Jockeys, or Rocky Mountain Oysters. Phillips (Stoll) later explained Vibes emanated from Happy Campers. I think it’s best to use his own words:

Colorado is a super-transient state, so many people are from somewhere else. You hear things like, ‘When I moved here, I was such a happy camper.’ It’s not so much about camping as it is a state of mind. The people who live out here, whether they’re camping or hiking with their family or walking the dog or having a beer with a buddy, they’re happy campers.But what makes the people here happy campers? It’s the outdoors, the sunshine, that feeling you get when you live here in Colorado. So what’s that feeling? How do you describe that?

Not ‘There’s a Punchy Pika Party in my soul and everyone’s invited!’, apparently. 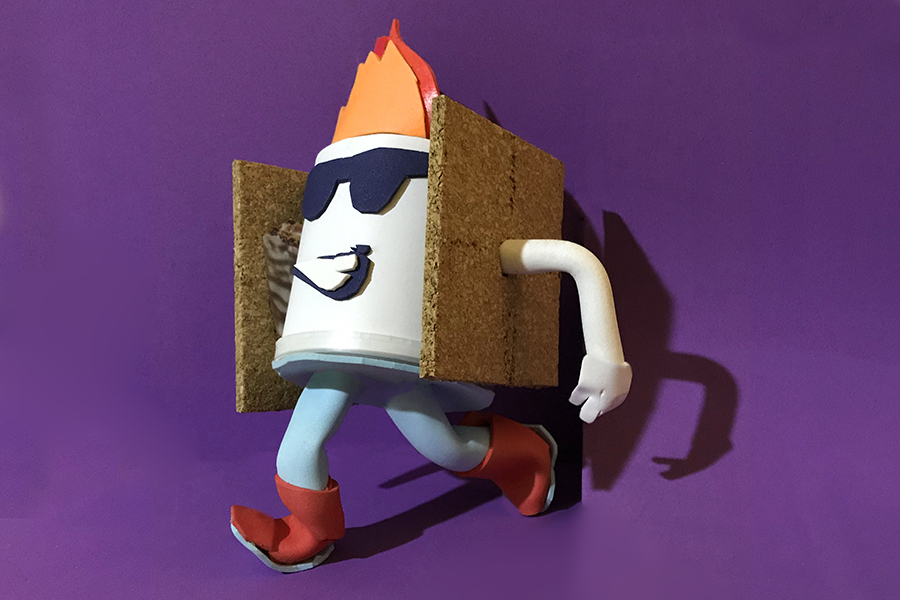 I’m possibly being unfair again. As Phillips explained, Colorado Springs in particular needed positivity, after the Sky Sox — who began as the Sacramento Solons in 1918 and spent their mid-life crisis as the Hawaii Islanders beginning in 1961 — lost their longtime Colorado Rockies affiliation in 2014 and eventually left town entirely and became the San Antonio Missions. Reading between the lines, the city lost a Triple-A team and only was able to replace it with a Rookie-level squad because of the high altitude — the Vibes’ official website admits their stadium is 6,531 feet above sea level, “the highest professional baseball park in North America” — making it too much of a launching pad for MLB teams wanting to properly figure out if their investments are going to be good or not to be fully satisfied. It’s likely the actual reason why the Vibes are on the 42 Skiddoo’d list, Hot Tub Heaven’s Famous Hot Tub, “the world’s first aquatic party venue inside a sporting facility” be damned.

There was a baseball team during the first five years of the 20th century that called themselves the Colorado Springs Millionaires. The players were not at all millionaires; Marvin Miller wasn’t born until 1917. Hell, they couldn’t even afford chairs for everybody! 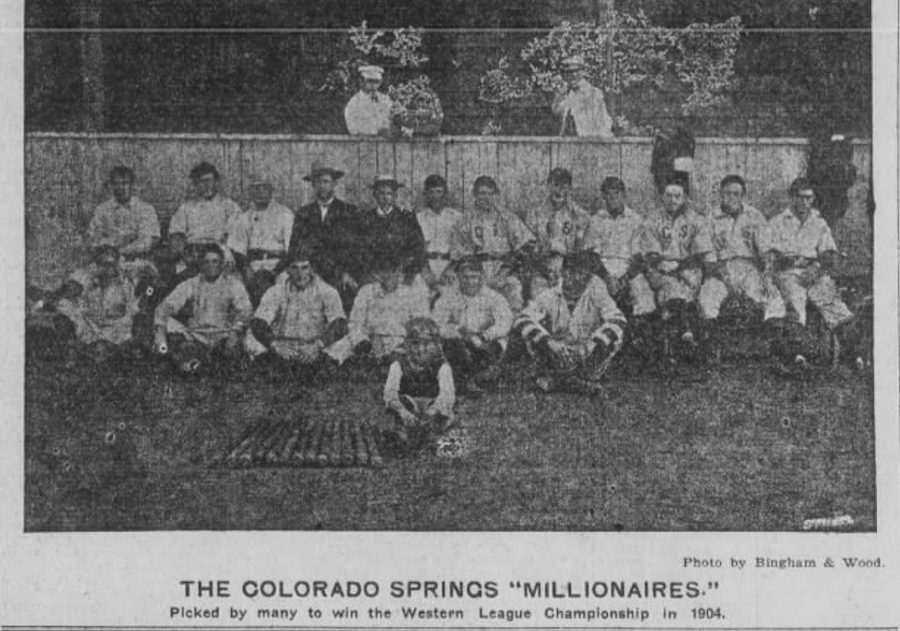 The Millionaires did however have their own stationery. This led to F.C. Lory, known as the “Klondike King” after hitting it big in the Klondike Gold Rush, to lose $65,500 in a massive bunco scheme. He was suckered in when crooks used the team’s stationery to make it seem like there was a “Millionaires Club” where Lory could have made himself even richer. The Klondike King was trying to lay low in a Colorado Springs hotel in early 1903 when The Weekly Gazette tracked him down. He was trying to work with the city’s chief of police in capturing the many criminals involved, claiming he spent more money than he lost in the scam to track all of the bunco men down. If this sounds like a Coen Brothers film, that’s because it is every single Coen Brothers film.

The Millionaires Club, the one that played baseball and maybe bunco (a dice game entirely based on luck) on the side for candy or the patent for the diode, were very good in 1904, until they struggled late in the season and lost out on the pennant to the Omaha Rangers. They weren’t drawing fans to their home games whether they did well or not though. A headline of an article sharing a page with the above team photo asked “WILL THE PEOPLE SUPPORT A WINNING BASEBALL TEAM?” The first sentence gave away the answer. “The question as to whether or not Colorado Springs wants a representative baseball team has, to all intents and purposes, been answered in the negative.” The Millionaires would move to Pueblo, Colo. during the following season. 116 years later, Chris Phillips told the Denver Post the Vibes provide a $20 million economic impact on Colorado Springs.

The Millionaires were a part of the Western League, in competition at the time with the American Association. The AA would last until 1997, the last 50 or so seasons as a Triple-A league. The Western League wouldn’t survive as long as the AA, but they existed as a Single-A league up until 1937. James Whitfield, president of the Western League, couldn’t see that all the way back in 1902. One early Monday morning, Whitfield silently walked into an empty room with a pistol. He did not leave that room alive.

It was suggested in the newspaper Whitfield killed himself because he had lost a lot of money and was overworked. There was no speculation written about a chemical imbalance, no consideration for the role genetics gave to the incident, nothing written of an unknown trauma form his past. No thought to why an otherwise intelligent man lost the capacity to imagine a future remotely worth sticking around for, even though it is unwritten. A future where talking out your struggles with depression and anxiety is not stigmatized. A future where the act of staying positive, of self-care, would become pervasive enough where businesses tried to make a profit off of them. A future where fans of a Colorado Springs baseball team would cheer fellow human beings on, shouting at the top of their lungs they wanted s’more runs, s’more baseball, s’more life, worshipping a marshmallow that’s toasted…Toasty, toasted OH MY GOD I JUST GOT THAT.

You need to be logged in to comment. Login or Subscribe
newsense
The stuff you write on is "stationEry"
Reply to newsense
Roger Cormier
Whoops. Fixed. Thanks.
Reply to Roger