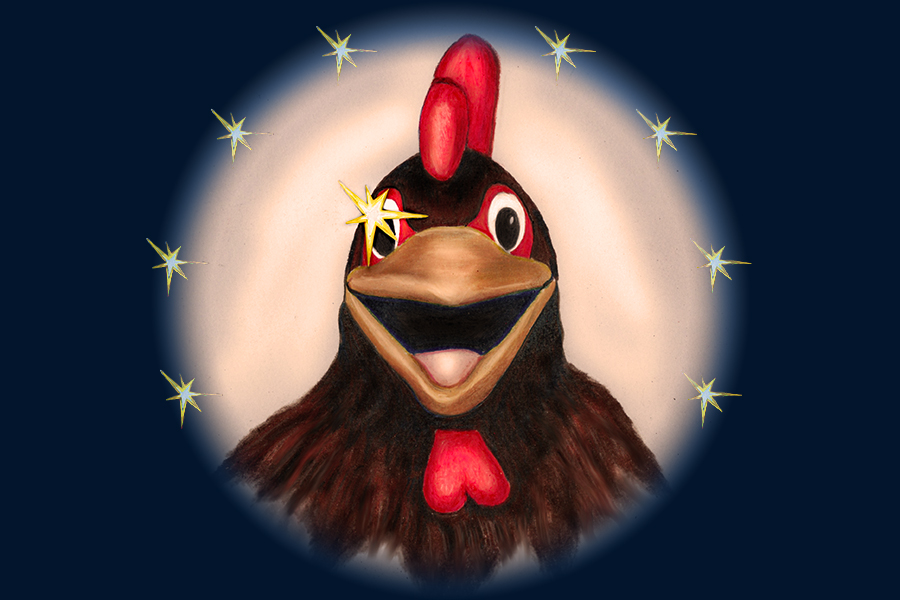 Every Tuesday and Thursday, Too Far From Town shines a light on the 42 (really 43) minor league baseball teams in danger of losing their major league baseball affiliations, effectively leaving them for dead. Today we focus on the Princeton Rays, a Rookie Advanced affiliate of the Tampa Bay Rays. You could take in the previous installments here.

Roscoe the Rooster ran afoul with the law before his first birthday. In 1992, the night after he somehow got himself ejected from a game, a police car with flashing lights interrupted the evening’s proceedings at Princeton, W.Va.’s H.P. Hunnicutt Field. The car motored all the way from the right field fence to first base when a handcuffed Roscoe burst out. He ran to the umpire, bent the knee, and kissed his feet.

Apparently Roscoe was scared straight in the slammer, because for awhile there he turned a new leaf, rebranding as “Roscoe the Drug-Free Rooster” (particularly funny considering Princeton held on to the “Devil” in the Devil Rays for an extra year after their parent club Tampa Bay nixed it.) He attended local schools to speak of the evils of drugs. That was a problem, since everybody knows mascots do not talk. But the principals of the schools would speak for Roscoe, and Roscoe just couldn’t handle that, so Roscoe began to talk himself. Full of confidence, high on the drug of not mispronouncing any words in front of a group of people, not even the ones you never heard out loud before, Roscoe decided to defy all the laws of mascotism and continued his chattering at the ballpark. He was encouraged even further by fans who enjoyed his chicken puns. If a youth called him a chicken, he would inquire to whom exactly they were calling a “chicken”, then challenge them to a fight. He liked to ask fans if they wanted to see a chicken strip, then start to unbutton his uniform, confirming the kids were right to call him a chicken in the first place.

Roscoe, nearing his thirties, has matured, more comfortable showing his sensitive side. There are reports of hugs and asking folks how they are doing in his nasally Southern accent. He acquiesces to television interviews.

The talking thing is still weird. Is this a screengrab, or something Dalí doodled on a napkin in lieu of actually paying for his lunch? 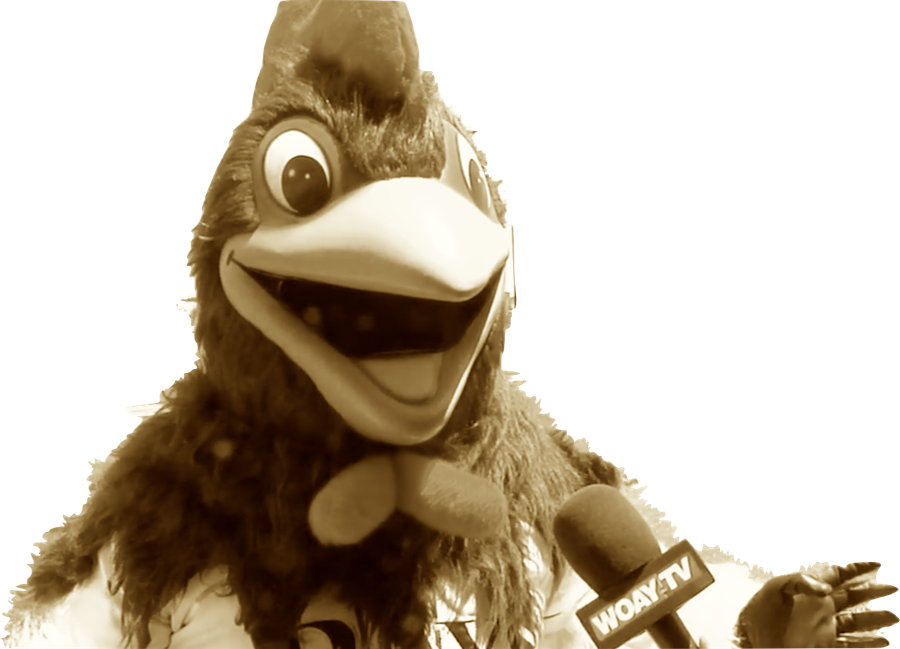 It is even stranger than Roscoe’s wrestling career. His successful wrestling career. You can watch his 2011 victory over The Cuban Assassin here, although I must warn you it is a tough watch — the refereeing is atrocious.

How does a Roscoe the Rooster happen? Where does the chip on his shoulder come from? The short and long answers to these questions start with the name Tommy Thomason. Thomason and Roscoe the Rooster have been one and the same since 2001. Thomason and Roscoe are both from Princeton, W.Va. The cities of Princeton and Bluefield, which is technically in both West Virginia and Virginia — we talked about this — are only 10-15 miles apart, depending on who you ask (Google Maps has the distance between the Rays’ ballpark and the Bluefield Blue Jays’ stadium at 13.5 miles.) They are the two cities of Mercer County. Basically, Bluefield is Eagleton and Princeton is Pawnee. Bluefield has a history of baseball dating back to the 1900s or even earlier, while Princeton first got a professional team in 1988, after the townspeople somehow built a stadium suitable for play in five months to appease the Pittsburgh Pirates. Bluefield won four Appalachian League titles since 1988; Princeton just once. Bluefield used to be referred to as “Little New York.” Princeton has heard of New York. Bluefield grew in the late 19th century thanks to the need of coal — Bluefield is situated right on the edge of a coal field. Princeton is only 200 New York city blocks away, but it might as well had been the distance between Times Square and a store where gum costs fewer than 35 cents. Mercer County Historian Patricia Smith best described the difference between the two cities when she said, “When I was a little girl, we dressed up to go to Bluefield.” 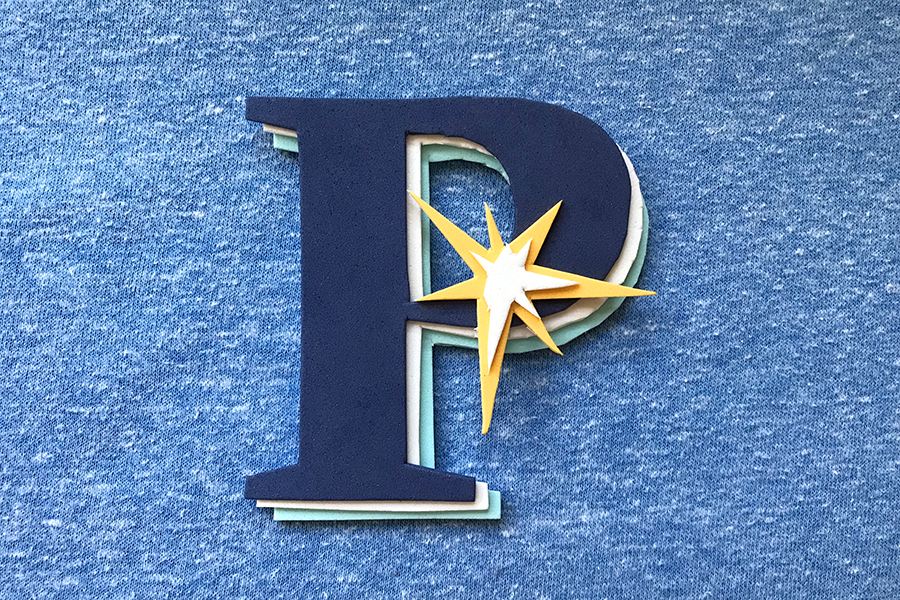 Coal is not as valued as it used to be, and people usually don’t dress up to go to Bluefield anymore. But Princeton will always be the little brother, in part thanks to the Mercer Cup.

The Mercer Cup was born the same year as Roscoe, 1992, back when the General Manager was Jim Holland and the team was known as the Princeton Reds. Holland ran into the proprietor of a trophy store. The guy told Holland he would like to be involved with the Reds any way he can. Holland thought about how Princeton and Bluefield are the only two pro baseball teams in the same county. A light bulb glowed. The Mercer Cup was born. The team that wins the 11-game season series between the two cities gets a shiny trophy, courtesy of the trophy store owner (presumably.) 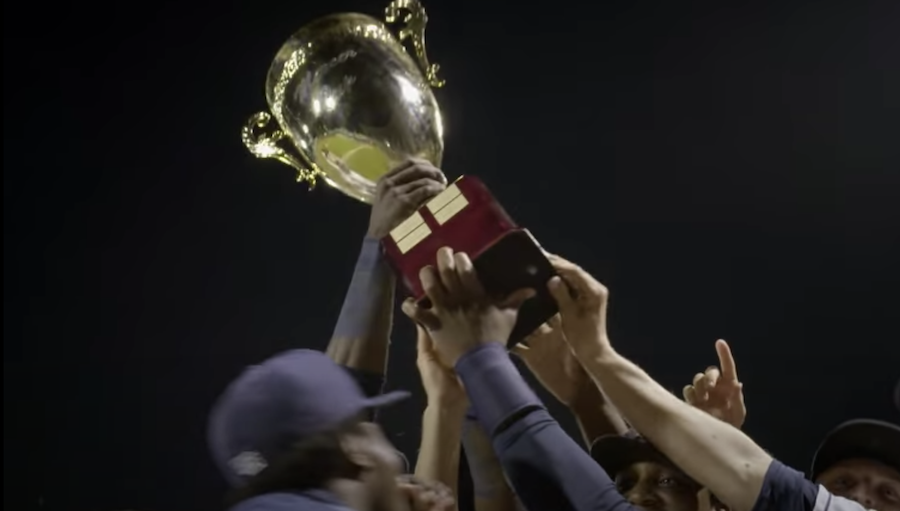 As Roscoe mentioned in the TV interview (still weird!), the Mercer Cup feels bigger than the World Series. Carl Crawford, Rocco Baldelli, Jonny Gomes, Seth McClung, Wade Davis, Alex Cobb, Kevin Kiermaier, Blake Snell, and Wander Franco are some of the players who were drafted into the Mercer Cup wars over the years for Princeton. They faced the likes of Noah Syndergaard, Armando Benítez, Kevin Pillar, and Vladimir Guerrero Jr. That’s right, even Vladito. 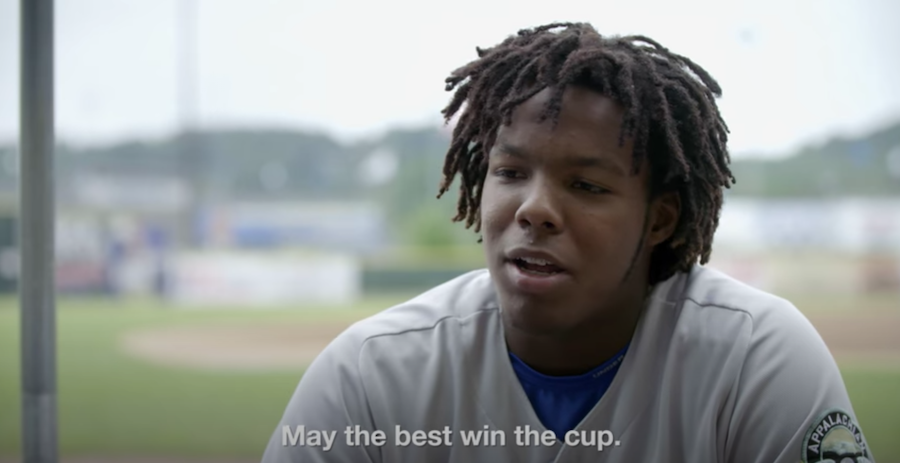 While Princeton won the first Mercer Cup in 1992, Bluefield that season won the Appy League title. When Bluefield took the series in 2014, they beat Princeton to the in retrospect obvious perfect hashtag.

Despite winning three of the last four Mercer Cups, Princeton trailed Bluefield 15-12 all-time in the event going into 2019. Last year it came down to the 11th and final game of the season between the Rays and the Blue Jays. Princeton was ahead 6-1. Then 6-2. Then 6-3. Bluefield tied it up in the 8th. In the top half of the 9th, two singles, two walks, then a double made it 9-6 Bluefield. Kyle Huckaby came on to close it out for the Blue Jays and give Bluefield the Mercer Cup, their Game Seven of the World Series, in Princeton’s park. Luis Leon looked at a called first strike. Then he looked at a called second strike. Huckaby’s third pitch was over the outside corner of home plate but a little high. Unfortunately for Leon and the Rays, the umpire declared it strike three. Jake Guenther, determined not to make the same mistake his teammate just made, swung at the first pitch, grounding out to third. Diego Infante came up to bat 2-for-4 with 4 RBI. Infante saw a pitch right down the middle, at the letters. He swung hard. He missed the baseball. Then Infante saw a pitch in almost exactly the same spot, a little closer to his body this time, but only a little. He swung hard again. He missed again. Huckaby had yet to throw a ball in his inning, and he wasn’t going to, because it was his inning. It’s always Bluefield’s inning, even when your batting, isn’t it? The third pitch was another strike. Another miss by Diego Infante. Another miss for Princeton.

Mercer Cup Champs!! Thankful for the opportunity to get the Save and a bath to go with it! 🏆🏆 pic.twitter.com/qS0UaK8KAf

What else is there to say?