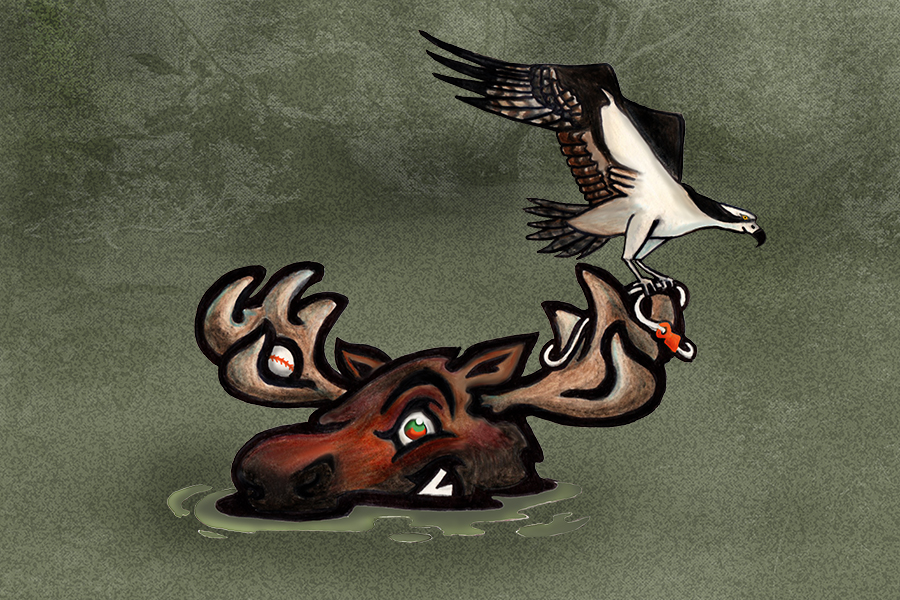 Every Tuesday and Thursday, Too Far From Town shines a light on the 42 (really 43) minor league baseball teams in danger of losing their major league baseball affiliations, effectively leaving them for dead. Today we focus on the Missoula PaddleHeads (Missoula Osprey), a Rookie Advanced affiliate of the Arizona Diamondbacks. You could take in the previous installments here.

One night in 2018, Seattle, Wash. residents Peter and Susan Crampton Davis attended a Missoula Osprey game with Mike and Judy Ellis. Their double date concluded at a nearby bar. While Peter, 70 years young, has been a Seattle Mariners season-ticket holder for over 25 years, and Susan is not a baseball fan, Susan’s charm that night helped convince Mike and Judy to sell the Osprey to the husband and wife. (That and the millions of dollars.) Susan, a former Human Resource Business Partner at the Bill & Melinda Gates Foundation, no doubt did most of the talking, because Peter could be astonishingly honest sometimes. He recently claimed that when he took over the silicon roofing system company Gaco Western in 1995, it was bankrupt “morally, spiritually, financially.” Gaco Western was a family business. He replaced his father.

Gaco Western was apparently the opposite of bankrupt, financially speaking, by 2017 when Peter sold the company to Firestone, suddenly giving him the funds to fulfill his lifelong dream of owning a baseball team. Peter and Susan moved to Missoula for the 2019 season. Did the Ellis’ tell them all there was to know about the city beforehand that night at the game or at the bar? Did they bring up writer-director-mostly-innocuous-crazy person David Lynch, who was born in Missoula, even though he was gone after two months? Or long distance runner Greg Rice, who said if his Missoula high school had a baseball team he might never have bothered with track and field, so he ended up setting the world records for best indoor times at both two and three miles? Or Olympic decathlete and 1992 bronze medalist Dave Johnson of Dan vs. Dave fame, who said growing up running from the Missoula police made him fast? Or former pitcher Steve Howe, the first player banned for life by Major League Baseball due to drugs after he pleaded guilty for attempting to buy cocaine in Missoula?

Probably not. The Ellis’ were more likely to have spoken of Missoula as a university town with mountains and undulating hills and the Clark Fork River, all of which are impossible to notice behind the outfield walls at Ogren Park Allegiance Field, one of the most gorgeous and relaxing batter backdrops imaginable. The author of A River Runs Through It based the book in Missoula; Missoula is a “blue circle in a red state.” Wherever you come from you won’t miss anything in Missoula, they probably say.

The Ellis’ likely brought up the Pioneer League team based in Missoula from 1956-1960. They were named the Timberjacks. Jack McKeon was their first manager. Yes, that Jack McKeon. He insisted on living life to the fullest. 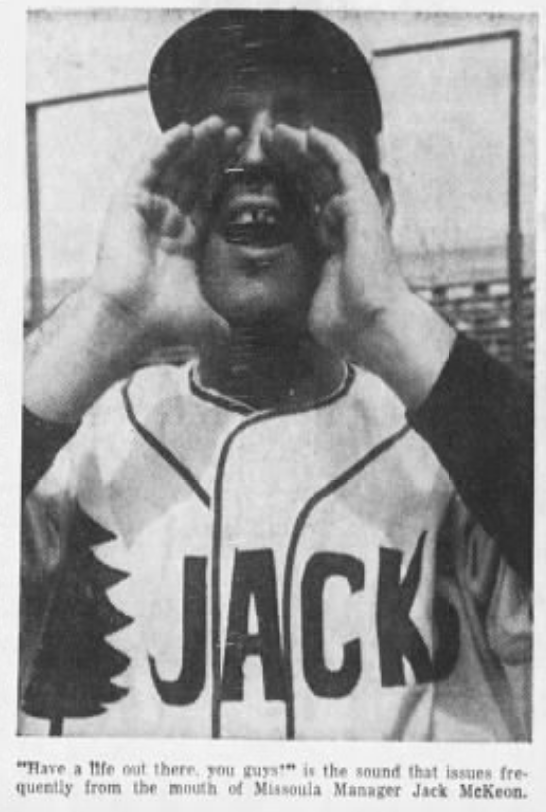 Nick Mariana was responsible for giving McKeon his first shot at managing, and for giving Missoula a pro team for the first time in 43 years. Yes, you better believe it is that Nick Mariana from our Great Falls Voyagers installment. His biggest claim to fame isn’t shooting video footage of UFOs, or “UFO”s though. He inadvertently helped steer Charley Pride to his big country music career. Pride, a former minor league and Negro League player before he joined the Army, drove from Memphis, Tenn. to Missoula for a tryout with the Timberjacks in 1960. He hit .400, but only out of five total at-bats; the parent club Cincinnati Reds didn’t think he was a prospect. Mariana helped Pride find work in East Helena at the Anaconda Smelting and Refining Company, where he knew they’d find Pride a spot on the company baseball team. He sang before games over the PA system for $10. That led to performing in Helena and Great Falls, Mont. honky-tonks. He would ease the tension in the venues by saying, “Ladies and gentlemen, I realize it’s kind of unique, me coming out here on a country music show wearing this permanent tan.” In 1967, Pride became the first Black solo singer to ever perform at the Grand Ole Opry. He was inducted into the Country Music Hall of Fame in 2000.

Missoula lost their franchise in February 1961. A bitter Mariana claimed the Pioneer League would fold in a year. The league kept right on going through 1999, when the Ellis’ brought the Lethbridge (Alberta, Canada) Black Diamonds down south to Missoula. Mike and Judy surely mentioned this part.

Probably in an affected cool nonchalance, they brought up their inaugural season in Montana, when the Osprey gave Missoula its first ever Pioneer League championship. 18th-round pick Lyle Overbay was a big part of it. Overbay had never played first base before that 1999 season with the Osprey. When the Arizona Diamondbacks called to tell him he was drafted and they wanted him at first instead of in the outfield where he played in college, he said, “Uh, you got a first baseman’s glove? Because I don’t.” His defense barely mattered — the guy put together 101 RBI in 75 games. He became the first player in professional baseball history to drive in 100 or more runs in a year at the short season level.

“What was the peanut inning about?” Mike and Judy Ellis should have seen that question from Peter and Susan coming. It is a perfectly reasonable question. Yes, if the Osprey score a run in the 6th inning, the loudest fans get free peanuts. 6th inning = Peanut Inning. Yes, even future major leaguer Keon Broxton felt particular pressure to do well in the 6th.

The Missoula Osprey claim to be the only minor league franchise with a live mascot living in its natural habitat at their stadium, which not only sounds true, but almost as importantly is probably technically the truth too. For years, the same osprey couple would nest on top of a power pole above right field at Ogren Park Allegiance Field. Sometimes during games fans saw an osprey carry trout from the Grand Fork River back to the nest for their feeding time. But before the osprey showed up for 2013, a Canadian goose named Clara got their first and laid eggs in the stadium nest, then claimed she didn’t see anyone’s names on it. The female osprey tried to build a nest on a high-voltage line nearby. It didn’t end well. After that, whenever the osprey went south for the winter, members of the Raptor View Research Institute put cone-shaped “goose excluders” on the stadium nest and did not take them down until the following April, typically when the geese have all chosen their own nests in town, but before the osprey tend to return. In 2012, the Missoula Osprey won their third Pioneer League title. In 2013, they finished 11 games under .500.

Last November, the team announced a change: beginning in 2020, they were going to be the Missoula Paddleheads. Moose antlers are known in some parts as ‘paddles’.

The internet was not happy, despite, or because of, the hype video.

The team’s director of public relations claimed a name change was discussed “soon after” the new owners arrived.

Less than two weeks after the unpopular Paddleheads announcement (Paddlegate), the Paddleheads/Osprey appeared on the initial reports of the 42 minor league teams likely to be stripped of their MLB affiliation. Peter Davis called it a “shocker.” He messed with the osprey. He got the beak.

Davis had more to say. “We’re so critical to the vibrancy of all these communities in the summer. It’s just fundamental. Baseball is supposed to be America’s pastime, although Major League Baseball is doing their best to destroy that.”