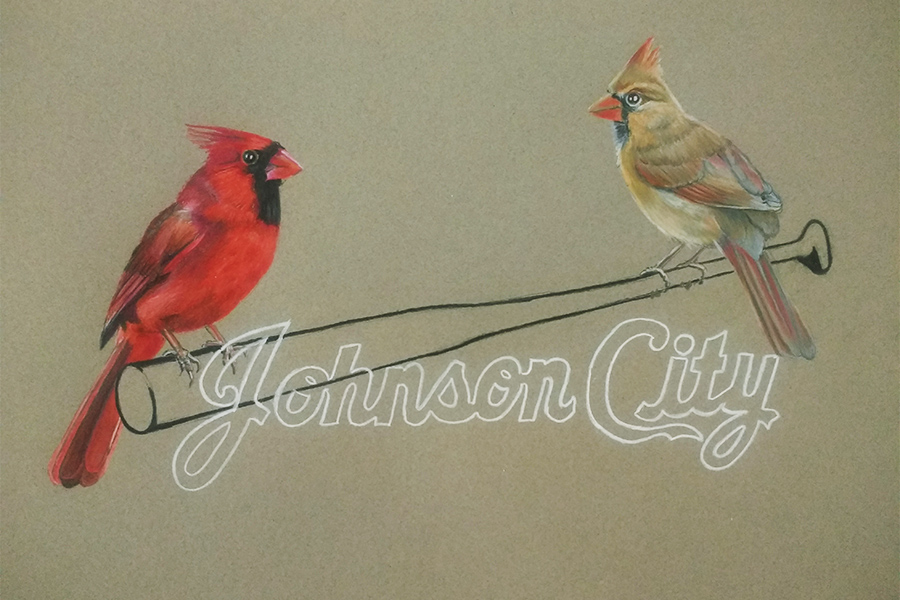 Every Tuesday and Thursday, Too Far From Town shines a light on the 42 (really 43) minor league baseball teams in danger of losing their major league baseball affiliations, effectively leaving them for dead. Today we focus on the Johnson City Cardinals, a Rookie-level affiliate of the St. Louis Cardinals. You could take in the previous installments here.

It is always a pleasant surprise to see karma manifest itself in the real world. It is nice to believe a higher power automatically metes out a big heaping of trouble to any individual knowingly inflicting pain and/or misery on others. If you care to, you could find karmic retributions handed out from one baseball team to another constantly. Most franchises have long, seemingly endless histories; it is damn near impossible to not find an initially considered unique moment’s mirror image in an old scorecard or tweet or article.

So it would be nice to know the Johnson City Cardinals deserved their place on Major League Baseball’s list of minor league teams getting the heave-ho somehow. The team won the Appalachian League championship in 2019. Last season they broke their attendance record for the third consecutive year. Their home, TVA Credit Union Ballpark, was voted best rookie-level stadium in both 2017 and 2018 by Ballpark Digest readers. If the JC Cards stopped existing, Johnson City folks would have to drive an hour each way to see the nearest MiLB team. It already takes four hours to go to a big league park. So the team or the town must have done something pretty damn awful.

Back in February of this year, Rachel Balkovec became the first ever female hitting coach for a MLB affiliate when she started work with the Gulf Coast Yankees. She got her start in the pros as an intern with the Johnson City Cardinals, earning 2012 Appalachian League Strength Coach of the Year honors. But the JC Cards didn’t bring her in full-time — at least not at first. Only after nobody would hire her — with one major league strength and conditioning coordinator actually admitting she wasn’t getting hired because of her gender — and a low-paying internship with the White Sox, did the Johnson City Cardinals offer her a full-time position. But they did the right thing eventually, so that likely isn’t it.

1982 JC Cards roommates Vince Coleman and Terry Pendleton experienced racism like they never had before. But neither of the two incidents Pendleton recalled in 2019 took place in Johnson City. Their otherwise mild-mannered manager in fact jumped into the Pulaski, Va. stands to confront one of the vitriolic hecklers of Coleman, Pendleton, and pitcher Kevin Moon. It is of course possible other Johnson City players through the years heard awful things on their home field, but I somehow doubt Major League Baseball chose Johnson City to strip of their MLB affiliation because they heard rumors of racist issues there.

Their mascot, JayCee, seems nice enough. He enjoys visiting local schools and reading to kids, and we enjoy reading that fact.

Maybe it’s something the town did? Johnson City, Tennessee is the birthplace of Mountain Dew. That rumor we all heard growing up isn’t true, so that isn’t it.

Reliever Jerry Blevins was born in Johnson City. Blevins has not wronged us in any specific way.

The actor Matt Czuchry grew up in Johnson City. He of course played Logan Huntzberger on Gilmore Girls. His father was the real heel there. Don’t even get me started on that guy.

God was Timothy Busfield annoying in Field of Dreams. But he only went to college in JC.

I guess that just leaves us with the 1913 Johnson City Soldiers, led by player-manager “Legs” Martin. They won the Appalachian League championship because the Knoxville Reds refused to make the 101-mile trip to Johnson City to finish their World’s Series. The Reds players thought they would get maimed if they went back. Or worse.

March 4th, 1913: Charles Dalton was fined $1 for riding a bicycle on the sidewalk.

The most malevolent story I could find through other newspapers’ archives in 1913 Johnson City was of a local resident getting caught with four wives, one of whom was 13. That’s awful and creepy, but he was in jail, and no threat to the Reds.

The first automobile accident in Johnson City probably occurred in 1913. There weren’t many cars back then though. If the Reds managed to draw walks on a regular clip I’m certain they were capable of looking both ways before crossing the street.

Was it the Johnson City ballpark, referred to then as “Soldiers’ Field” that the Reds had a problem with? Maybe. There were a notably high number of rainouts in both 1912 and 1913 in Johnson City, and there were complaints about the infield causing wonky bounces off hard-hit balls. But that hardly seems worth not trying to win a pennant, especially when you had a 2-1 series lead when you quit.

Was it the fans? Maybe. Returning Soldiers catcher Dave Taylor said the fanbase was “more crazy” about baseball than ever. The Knoxville Sentinel claimed the Johnson City faithful “are daffy about the grand old game”, as per usual. But the 130 fans who went to see their Soldiers play in Bristol were praised for being on their best behavior, even in defeat.

Seemingly no troubling incidents, outside of a bad call by an umpire, went down in Johnson City when the Reds were in town a month before the championship series started. Knoxville was able to win on Soldiers’ Field, so it wasn’t that.

In the third and what would turn out to be the final game of the Appy League finals of 1913, two incidents did stand out. The aforementioned Dave Taylor accidentally got spiked at home plate, and Taylor was apparently the most well-liked athlete out there. And an apparent Johnson City fan who made the trip to Knoxville tried to defend his pitcher and got into it with the umpire.

Pitcher Lowry squabbled with umpire Vernon. Upon one occasion Mr. Sam Lanford, although attired in citizens clothes, walked out into the diamond and made himself rather conspicuous by indicating that he was like to “fight somebody preferably Umpire Vernon.” The fans got after Lanford good and strong and he was all but hooted off the field. His grandstand bluff was decidedly “hillbilly” to say the least.

But according to The Journal and Tribune, the possible bad blood from the Taylor spiking nor Mr. Sam Lanford was not going to deter Knoxville Reds fans from going to Johnson City.

Quite a number of enthusiasts are planning on running up to Johnson City for one of the two games. The Reds will leave on the Memphis Special Monday morning.

Alas, a “round robin” was signed by the Knoxville Reds the night of Game 3. They said under no circumstances would they travel back to Johnson City, out of fear for their safety, and because they had jobs waiting for them they risked losing if they didn’t take them up immediately. The latter excuse was proven to be a lie almost immediately, when the Reds happily welcomed the Southern League champion Atlanta Crackers to Knoxville for a three-game series the following weekend. All but Reds starting third baseman “Doc” Watson, who really did go home to his ill father, were present and accounted for. (Yes, even “Humpy” McElveen!) “Doc” Watson was replaced by Grover Cleveland. Not the POTUS, the third baseman for the Johnson City Soldiers.

Then again, Cleveland went 1-for-11 against the Crackers, giving him an .089 average, the lowest out of any Knoxville Reds position player in the series. And Cleveland, “ordinarily one of the best fielders in the Appalachian League”, suspiciously committed two errors in a single inning, not non-consecutively. Yes, that must be it. It has to be. It has to be something.

You need to be logged in to comment. Login or Subscribe
Alexander Bensky
Inexplicably, you have missed Johnson City's second best attraction after the ballpark--the Museum of Ancient Brick.
Reply to Alexander
Roger Cormier
Oh no, I must visit this brick...houuusee...
Reply to Roger
Anton Dahbura
Ballpark Digest, not Baseball Digest (although I enjoy reading both!).
Reply to Anton
Roger Cormier
Fixed. Thank you. I too enjoy reading both!
Reply to Roger