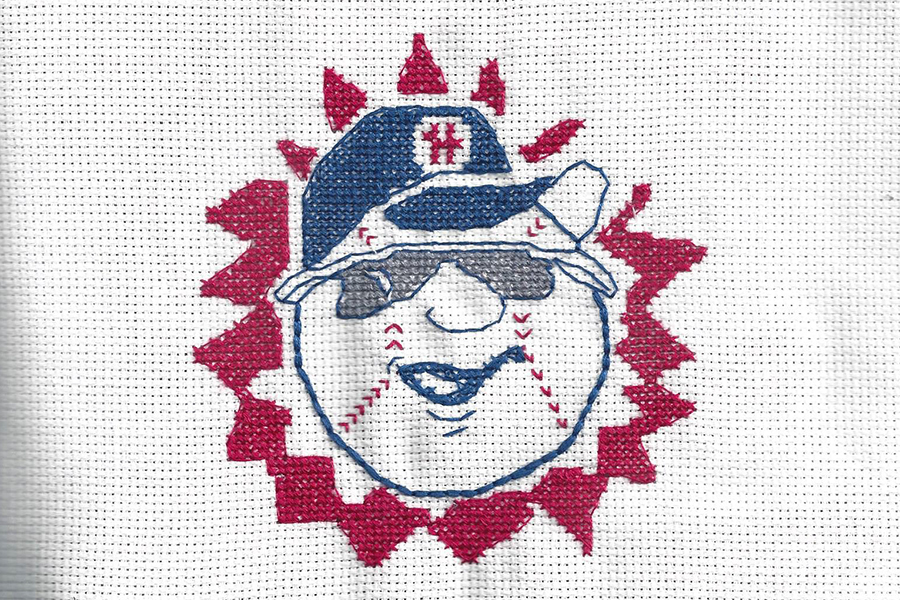 Every Tuesday and Thursday, Too Far From Town shines a light on the 42 (really 43) minor league baseball teams in danger of losing their major league baseball affiliations, effectively leaving them for dead. Today we focus on the Hagerstown Suns, a Single-A affiliate of the Washington Nationals. You could take in the previous installments here. 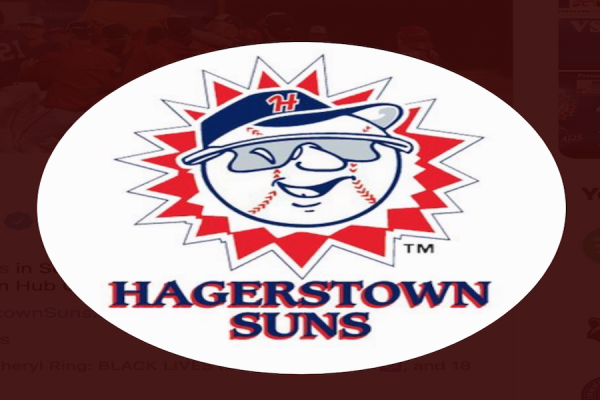 Why does the baseball sun wear shades? Science fails us. The Raisin Bran sun fails us, for the Raisin Bran sun never wore sunglasses, no matter how deep we burrow down the google hole and screen all of the vintage breakfast cereal commercial collections on YouTube. 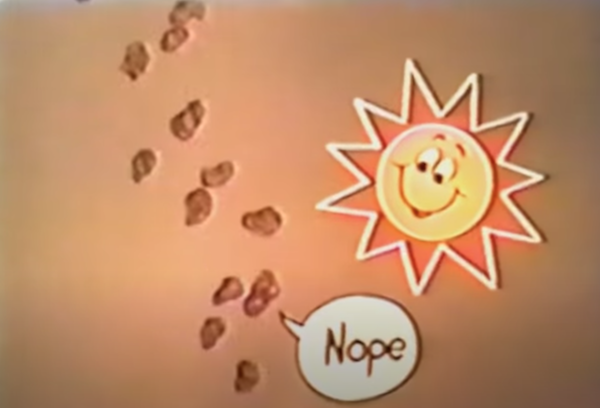 Either the Hagerstown Sun is looking at another bright sun, which quite frankly with Stephen A. Smith is so not what we need right now, or the Hagerstown sun is just, like, cool man. Just, like, everything is fine, because I am fine, because the world revolves around me and I am killing it, and I am living it, and I am the son, and the heir, and I have stopped following Morrissey news after The Smiths broke up. Confident. Dare I write after a pregnant em dash — arrogant.

What props this hubris spheroid up? Is this ball of gas full of hot air?

Maybe it is simply too old to give a damn?

The Hagerstown, Maryland sun has looked down upon a lot of baseball. Since 1896, eight different baseball leagues welcomed a professional ballclub from Hagerstown. There was darkness from 1956-1980, and then the Suns came to be in 1981 and, as of this writing, continue to be.

The Suns’ inaugural season started off pretty shaky. The first four home games were played in the afternoon because Municipal Stadium’s new lights did not get installed in time. The box seats were four rows of wooden benches. The press box was a wooden shed. But their manager Grady Little made it work. They won the Carolina League championship. When the Suns arrived at midnight at Municipal Stadium hours after clinching the title on the road, fans, and pizza provided by the mayor and the city council, were waiting for them.

The Suns haven’t won a league title since. That did not stop George H.W. Bush from attending a Hagerstown game in 1990, making him the first sitting U.S. President to attend a minor league baseball game (or probably any POTUS at any time). Bush and the Nuclear Football and Walter Payton were planning to take in a Frederick Keys game, but it was rained out. It wasn’t raining in Hagerstown, where the sun always shines and there are, at the very least, one thousand points of light.

When Bryce Harper, an ambulatory sun wearing shades, made his professional debut, it was in a Hagerstown Sun uniform.

Willie Mays’ first minor league game was in Municipal Stadium in 1950. The Trenton Giant’s first outfield catch earned a round of applause.

Lester Bangs played for Hagerstown from 1916-1917, and again in 1928 when he served as the team’s 35-year-old player-manager. Juan Soto was a Sun in 2017 and 2018. If only we could have seen Bangs’ 3000-word screed on the mellifluous sounds of the baseball coming off of Childish Bambino’s bat. 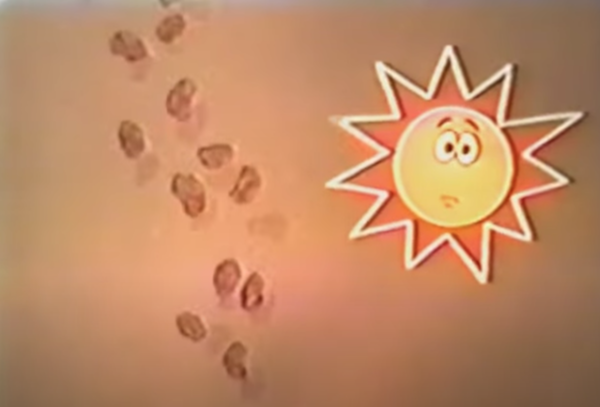 Here’s the thing: 100 years ago, team nicknames were less official as they are now. It wasn’t like billions of dollars in merchandise was part of the equation. A franchise would sometimes technically just be the [Insert City Here] Professional Baseball Club. They would be referred to collectively by some nickname that might or might not stick for awhile. Sometimes a newspaper would refer to the team by their nickname. Sometimes newspapers would refer to them by their nickname and a collective noun the paper came up with themselves. Sometimes, apparently not at all confusingly to readers of the time, newspapers would use the official-ish nickname and the nickname they came up with on their own interchangeably. Sometimes a team would end up officially known as the collective noun the newspaper thrust upon them (like the Chicago Cubs.)

As far as I can tell, sometimes the defending champion of a league would get referred to in newspapers as “Champs”. But not exclusively — it would be “Champs” and whatever their silly actual nickname was, interchangeably. This wasn’t the case with the Hagerstown squad. First of all, while they were technically the defending champions of the Blue Ridge League, the last full season of play that crowned an ultimate winner was 1917. The league took a three-year hiatus mostly due to World War I and the 1918 pandemic (can’t relate!) Secondly, Hagerstown didn’t offer an alternative nickname. They were the “Hagerstown Champs”, and their league opponents were the “Frederick Hustlers”(!), the “Waynesboro Villagers”, the “Martinsburg Mountaineers”, and the “Hanover Raiders.”

That also puts quite a target on your back. Fortunately for Hagerstown, the Champs were pretty good. It helped that during the season, the Mountaineers sold future Hall of Famer Lefty Grove to the Baltimore Orioles (then of the International League) for $3,000 so they could pay for a new outfield fence and grandstand. It also helped that the Frederick Hustlers tried to cheat by going over the salary cap (100 years was a long, long time ago, wasn’t it?) and signed high-priced players for a late season push, leading to their everyday second baseman to walk away in protest.

The Champs knew they were good; more than once during the season newspapers noted the players tended to smile a lot for ballplayers. They were not gentlemen: some Champs had no problem using foul language in earshot of female fans in Hanover. The Hagerstown Mail, via the Public Opinion of Chambersburg, Pa. colorfully revealed Champs player-manager Mike Mowrey to have a wandering eye. 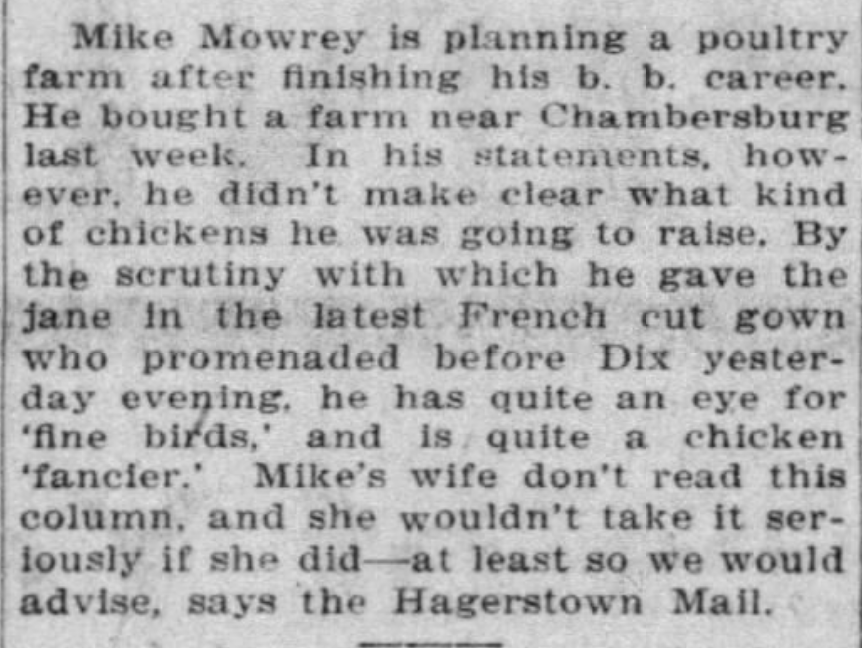 While one Champs fan who declared himself the “William Jennings Bryan of Hagerstown” reportedly was loud but markedly “cheerful and never offensive”, supporters of the Champs did not have the best reputation. The Public Opinion made it sound like the fans were rather entitled.

The above comments were from the same edition.

There was also the time an umpire walked off in the middle of a doubleheader because of all of the abuse from Champs fans. The second game was cancelled. 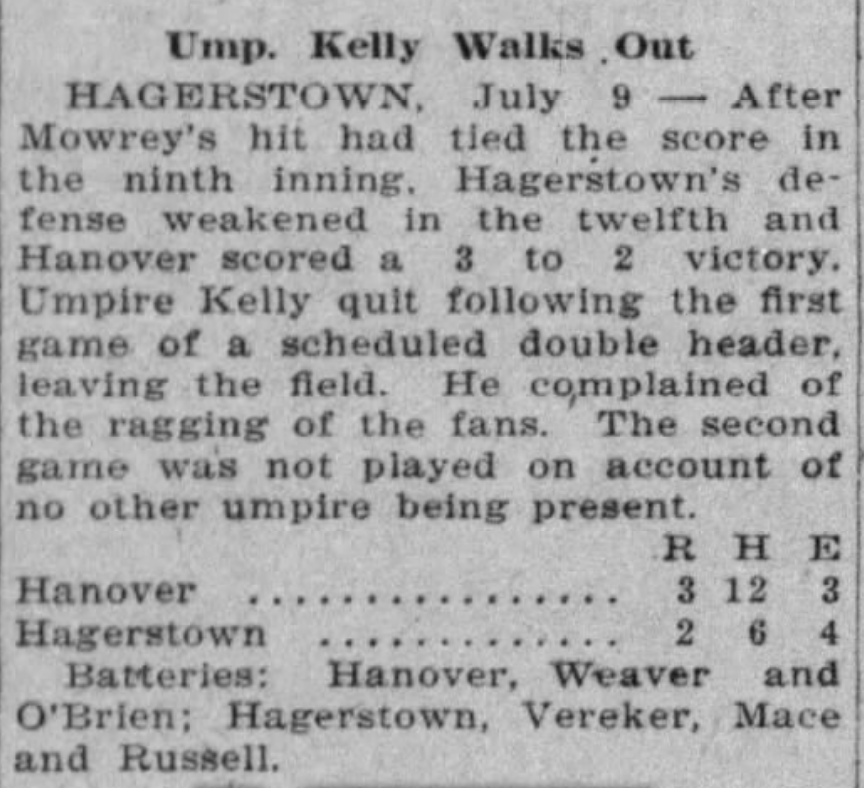 With a week left to go in the Blue Ridge season, the Champs had the pennant all but wrapped up when they were caught with 15 players in uniform, one more than the maximum, for two games. The Martinsburg Mountaineers protested those games. The League President’s response was that every team pulled this crap, and if they had to play all of the protested games over again they would all go bankrupt. The protest was cancelled. The Champs ended the 1920 season one and a half games ahead of the Frederick Hustlers.

The Champs were the champs. 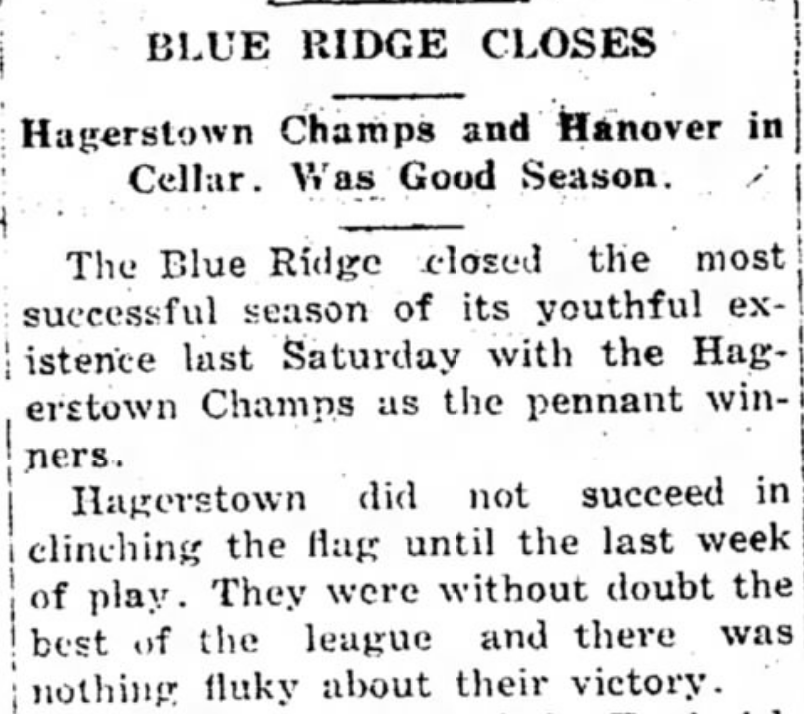 The next year they came in last. In 1922 they went back to being the Terriers. Eventually, Hagerstown found their identity and stuck with it. 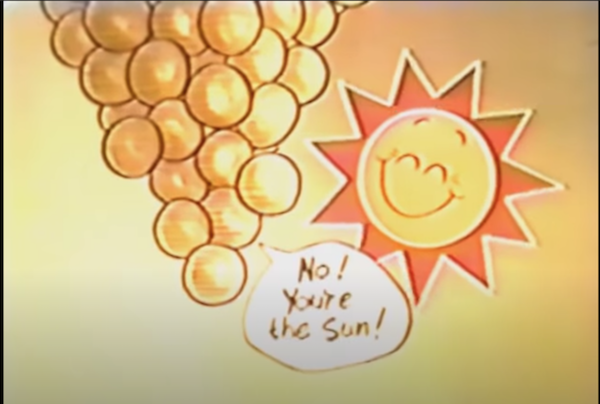 So here’s how it works: The caterpillar is black, with an orange band in the middle More orange means a mild winter. More black means a harsh winter.

The woolly bear caterpillar predicts the weather — or at least it’s fun to pretend that it does — and for that it is famous. Towns all across the country hold celebrations: the Vermillion Woollybear Festival, the Oil City Woolley Bear Jamboree, the Lewisburg Weather Prognostication Ceremony, and so on.

This is all a little unfair to the caterpillar. Caterpillars exist in our imaginations only as a Before. They’re the ugly thing that preceded the beautiful thing; not the World Series champion Washington Nationals, but the Nationals at 19-31, about to fire their manager, wondering whether any of this is in any way worth it. And here we are with our festivals and jamborees, so close to finally celebrating the caterpillar for what it is, but instead we celebrate its ability to predict the future. Still a Before, now a bellwether too. 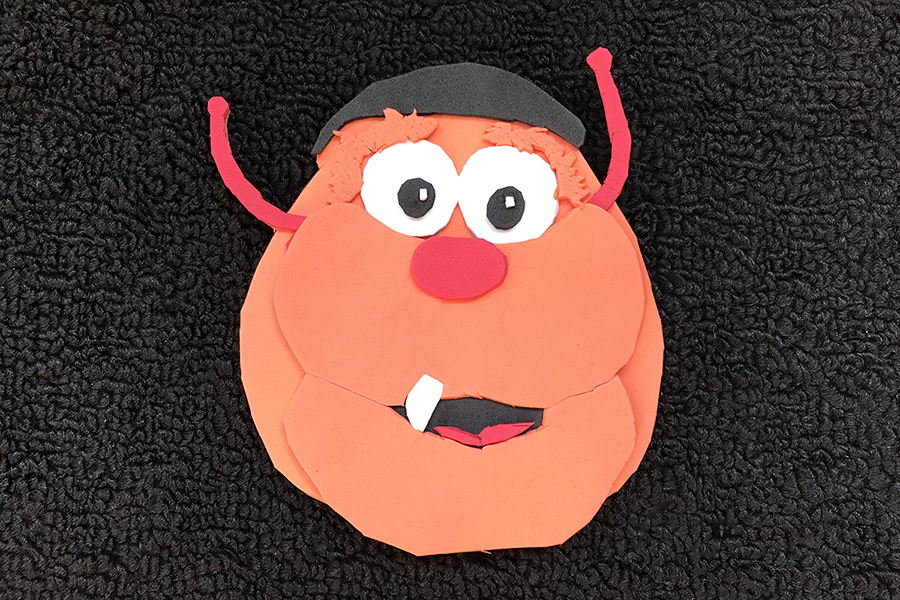 Caterpillars have been on my mind lately because of Sam Anderson’s lovely essay in the New York Times Magazine, so let me share with you a few details about Hagerstown’s contest. It was created some time in the seventies, by the Hagerstown Town & Country Almanack (“Conjecture of the Weather and Other Astronomical Information”). The Almanack has been around since George Washington was president, and is still published by direct descendants of its founder. The caterpillar contest slowly faded in popularity, and in 2012 was set to be retired when the Hagerstown Suns stepped in.

The mascot of the Hagerstown Suns is, in theory, a woolly bear caterpillar. Its name is Woolie. The Baltimore Sun once said that Woolie, “looks like a caterpillar caught in some horrible nuclear catastrophe,” which is honestly pretty generous. The Suns and their lovable night terror of a mascot helped to rouse the public enough to keep the contest going for a few more years. 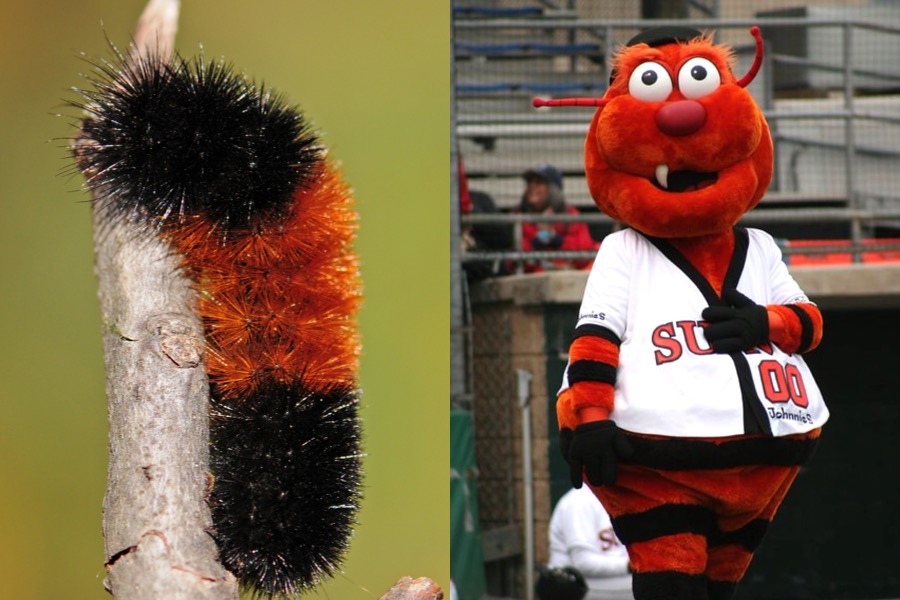 The contest was extremely scientific. Children collected caterpillars and brought them to Woolly Bear Headquarters, also known as the Sonic Drive-In over on Dual Highway, by the Bob Evans. Hundred dollar prizes were awarded for the cuddliest caterpillar and for the biggest caterpillar. All contestants received a free vanilla ice cream cone. All entries (that is to say, caterpillars) were promptly returned to a nearby pasture after judging.