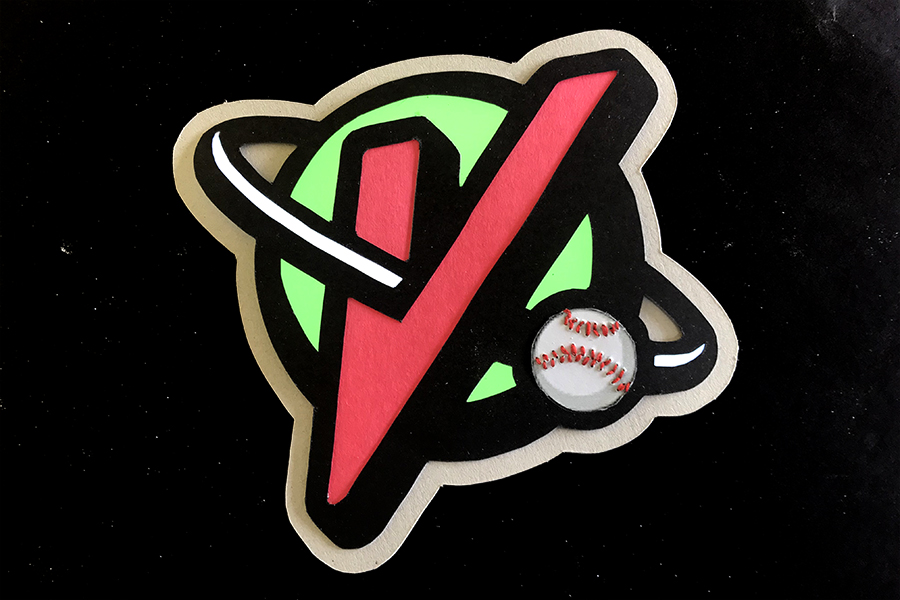 Every Tuesday and Thursday, Too Far From Town shines a light on the 42 (really 43) minor league baseball teams in danger of losing their major league baseball affiliations, effectively leaving them for dead. Today we focus on the Great Falls Voyagers, a Rookie Advanced affiliate of the Chicago White Sox. You could take in the previous installments here.

Baseball first arrived in Great Falls, Montana on the eve of summer 1887. The first game in “Electric City” was called after the top of the second inning when the ice cream man showed up. The captain of the team somehow already down 8-0, “Del” Chowen, treated his charges to one vanilla dish each. Then the players enjoyed “peppermint toddies” and “Jamaica ginger cocktails.” Back when baseball was fun and good.

18-year-old Pedro Martínez went 8-3 for the Great Falls Dodgers in 1990. He thanked his Great Falls host family, Shelley (“Mama Conchita”) and John Haffner for “introducing him to the United States” in his Hall of Fame speech.

Instead of rebranding the Great Falls team the Peppermint Toddies or the Pedros in January 2008, the powers-that-be opted for the Voyagers. It was a bit of a tip of a cap to Lewis and Clark, who did their thing nearby. ‘Voyagers’ is mostly in reference to one of the most famous UFO sightings in history. It was filmed at Legion Park, known today as Centene Stadium and still the home of the Great Falls team, on August 15, 1950 by Nick Mariana, then the general manager of the Great Falls Selectrics. Mariana is the Abraham Zapruder of Tom DeLonge and the rest of the UFO community. Club President Vinney Purpura used the following footage as part of the Voyagers’ opening multimedia presentation:

The United States Air Force looked at it twice, claiming the second time it must have been the two F-94 fighter jet-fighters that landed at nearby Malmstrom Air Force Base on that fateful 15th of August (Legion Park was originally built in 1940 for that very base.) Mariana, who served in the Air Force from 1943-1945, claimed his film was “confiscated” by his former armed forces branch the first time around, and when the footage was returned to him the Air Force cut out the frames of the movie that had the clearest look at the objects.

Up until These Times of Ours, the U.S. government denying the existence of possible extraterrestrial life was as American as apple pie. What’s interesting is UFO enthusiasts have apparently been debating the past 70 years over the validity of Mariana’s footage. The Selectrics were playing in Idaho Falls on August 15, 1950, yet Mariana said he walked to the grandstand of Legion Park to check the wind for that afternoon’s contest. (Which is unfortunate for the Voyagers, whose phone number of 877-815-1950 was in honor of the supposed date of the sighting.) Scanning newspaper archives from that year doesn’t help to pinpoint when the former Brooklyn Dodgers scout turned his camera on. The first mention of Mariana’s flying saucer film was in the September 11th edition of the Great Falls Tribune, where it’s reported he filmed the UFOs “several weeks ago.” 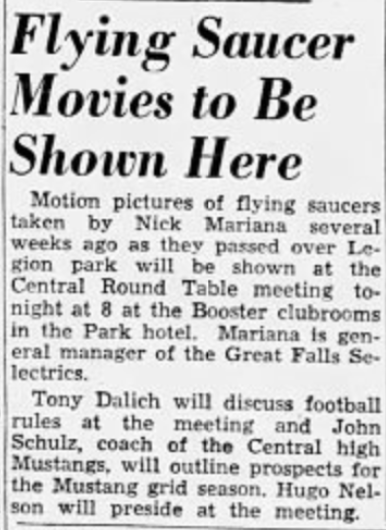 Skeptics point out Mariana was a minor league baseball general manager, thus a showman, someone who would do anything for attention towards him and his Selectrics. In Mariana’s defense, team attendance increased from the previous season (as he made sure to mention, in the very same September 11th paper), and was already on track to do so by August, the final month of the Pioneer League regular season. He also never seemed to bother to try to project his film at the ballpark, or tie it up to any official promotion in any way.

In the defense of the skeptics, months after he said the Air Force told him to “not give out any more details about” the film, Mariana screened the UFO footage as part of a double feature with a print of the 1950 World Series highlight film to the Lions Club, announcing that the Air Force cut out the best parts. He notably showed off that World Series film (the Yankees boringly swept the Phillies) elsewhere, like at the Rainbow Hotel at the Civitan Club luncheon meeting in January 1951, and to the Knights of Columbus two weeks later, and at the Elks Club six days after that while enjoying a Dutch lunch. There is a non-zero chance Mariana paired the World Series film with the UFO footage those times as well, and he was too scared to tip off the local paper on the entire program.

Mariana may have had a bit of a personality: on August 7, 1950, supposedly eight days before the infamous footage was shot, Selectrics manager Joe Bowman was surprisingly fired. It was announced over the stadium’s public address system before that night’s game with no explanation. (He was replaced by the “Harmonica wizard” shortstop John Angelone, who conveniently forgot his harmonica where he was scheduled to perform at the Welcome Banquet months earlier.) Team President Walter H. Jensen the next day blamed “friction” between Bowman and the players as the cause for dismissal. Bowman said the only friction he had with anyone was Nick Mariana. (Mariana was “surprised” by Bowman’s comment.)

Nick Mariana was the winning pitcher for Great Falls in the 1951 regular season finale, recording three scoreless innings(!) He had signed himself that day, either before or after the 24-1 loss to Billings in the first game of the doubleheader.

Mariana co-hosted a radio show called Nick’s Picks for 26 years prognosticating Montana high school football and basketball games. In a 1952 ad he was referred to as the “Old Professor” (Casey who?) and claimed he was correct on his selections 83 percent of the time.

The Great Falls Selectrics were sold less than two months after the UFO film to local fans and businessmen. The team agreed to a “tie-up” with the Pittsburgh Pirates after having no affiliation with a MLB team at all. Mariana’s connections with Branch Rickey Jr. helped. Maybe some extra publicity did too. 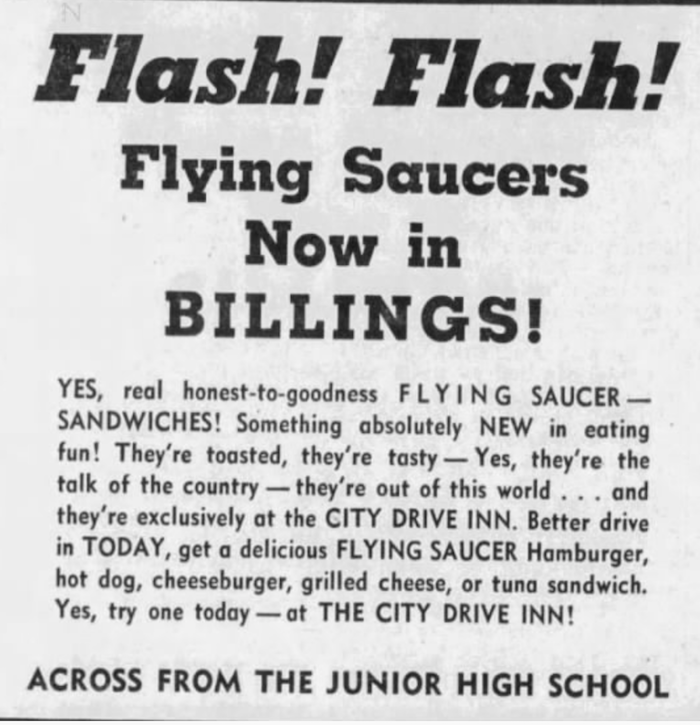 (I guess the sandwiches were shaped like flying saucers? And there was only one junior high school in Billings? I hunger for answers.)

Debuting June 3rd at the Fox Theatre in Missoula was the sci-fi spy drama The Flying Saucer, paired with The Pirates of Capri, for just 44 cents (9 cents for kids). The Billings Gazette touted one of the “newest design trends” of cabinets with “brushed-brass ‘flying saucer’ pulls” (circular). In October, Miss Anne Whitmack, librarian at Parmly Billings Memorial Library, announced that along with How to Win an Argument with a Communist, featuring the complete text of the Communist Manifesto, and 22 other books, Frank Scully’s Behind the Flying Saucers will be put into circulation. One week later, advertisements from the Superior Distributing Co. in Denver began to offer in the Billings Gazette papers “Flying Saucers”, the “latest, fastest money-making coin-operating amusement machine on the market.”

Montana residents saw flying saucers in the sky during 1950 too. There were three incidents in August alone, the month when Mariana spotted his UFOs. On August 10th, Lee McArthur, J.G. and Herman Frank were working on a roof in Laurel when they saw what looked like a “pair of bags flopping slowly” turn into a really fast “shiny disk”. On August 16th, 13-year-old Tom Kochler and his three friends were hanging out in Tom’s Helena backyard having a normal one when they spotted a round object with a “great, big blue tail” that was “way smaller” than an airplane. On August 28th, Fred Cockrill and Milt Merrick, two college kids from Great Falls, spotted a large, circular “silvery mass” with a long tail at a ranch south of Geyser. By early September, the Associated Press was writing passive-aggressive briefs like these: 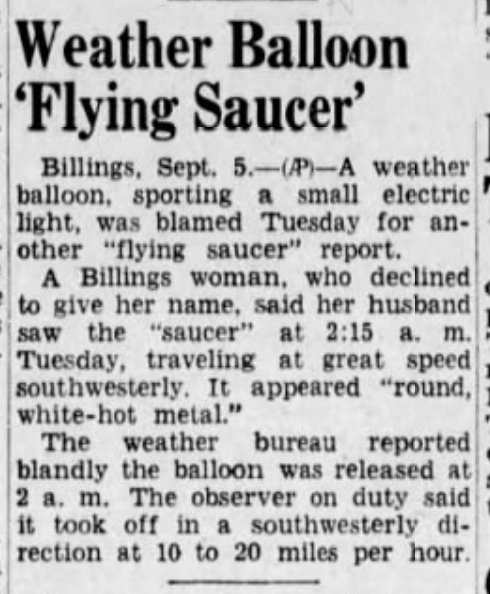 The UFO sightings stopped. For just over two weeks. On the 21st, Richard Ferrell was sitting in his Wednesday morning English class at Missoula County high school when he saw a “shiny, flat object” hover in the sky for 6-7 seconds and fly away in a “straight up maneuver.” On the 24th, Mr. and Mrs. Wesley Vandever “announced” they saw a “flying saucer or disc” that looked like a “large ball of fire” in Broadus. On the same day east of Roundup, B.H. Matzke and A.E. Rogerson, while working at the old tipple of Jeffries mine, spotted eight to 10 aluminum flying discs in constant formation. Explanations were plentiful: it’s the Northern Lights. It’s a meteor shower. Your neighbors with an Air Force base. Richie’s parents are fighting all the time. It doesn’t matter. We were saucer mad. We are still saucer mad, except the saucers aren’t saucers. Nick Mariana knew it. And he was the only one smart enough to film what he saw.

But it didn’t seem to give him that much fame outside of UFO (crop?) circles. In November 1953, Nick Mariana, wearing glasses to show that time had passed, announced his resignation as Great Falls’ GM (after 1950 they were known again as the Electrics). He purchased a beer distributorship in Missoula. In 1956 Mariana and a group of investors raised $25,000 to bring the Missoula Timberjacks into existence. They were kaput after the 1960 season, and a bitter Mariana was quoted as saying he was “disgusted with the majors” because “they are as greedy as anyone can get”, and predicted the Pioneer League would fold by the end of 1961. He nailed the majors part. He was off on the demise of the Pioneer League by at least 58 years.

Mariana didn’t seem to be too upset over the Air Force’s censorship, considering he took a U.S. government job in 1962 as the Conservationist Education Coordinator for the U.S. Bureau of Sports and Fisheries in Portland, Oregon. The article announcing the appointment claimed Mariana was offered a job with the Washington Senators two years earlier which he declined, not wanting to leave the West Coast. (Nowhere else was this written.) Nick Mariana apparently remained on his favorite side of the United States for the rest of his life. Portland was where he passed away on his 86th birthday in 1999.

Nick Mariana was not alone on that August 1950 day. 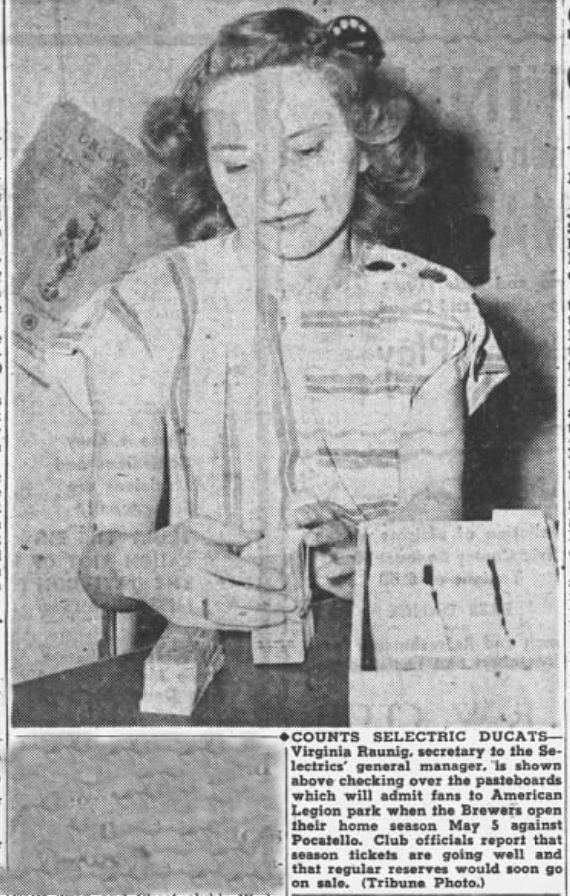 Virginia Raunig was the salutatorian of the Chester High School graduating class of 1948. She replaced Mrs. Betty Coughren as Mariana’s secretary in June of 1949 after Coughren resigned. According to the legend, Raunig was with Mariana inspecting the field when they both saw the flying objects. The next time Virginia appeared in a Montana newspaper was in 1952. She was pictured casting her vote for the U.S. presidency while election judge Glen Schermerhorn looked for a visible communism tattoo (Montana very much liked Ike.) On September 19, 1953, she married Robert Woods at St. Ann’s Cathedral. When Robert’s parents retired in 1960, Woods took over the family farm in Inverness. Robert and Virginia had three children. Robert died in 2011. Three years before, on the day Vinney Purpura announced that the Great Falls team will now be known as the Voyagers, as well as why, a phone call was made by a Great Falls Tribune journalist to Virginia. Robert answered the phone. He said Virginia didn’t remember much about the flying saucers after all this time. The reporter asked if Virginia had an official comment about Nick Mariana and his UFO film. Robert responded:

Well I’ll tell you this. He threatened to have her job if she didn’t cooperate.

You need to be logged in to comment. Login or Subscribe
Jeffrey Hill
Awesome, again.
Reply to Jeffrey
Roger Cormier
Thank you, again!
Reply to Roger