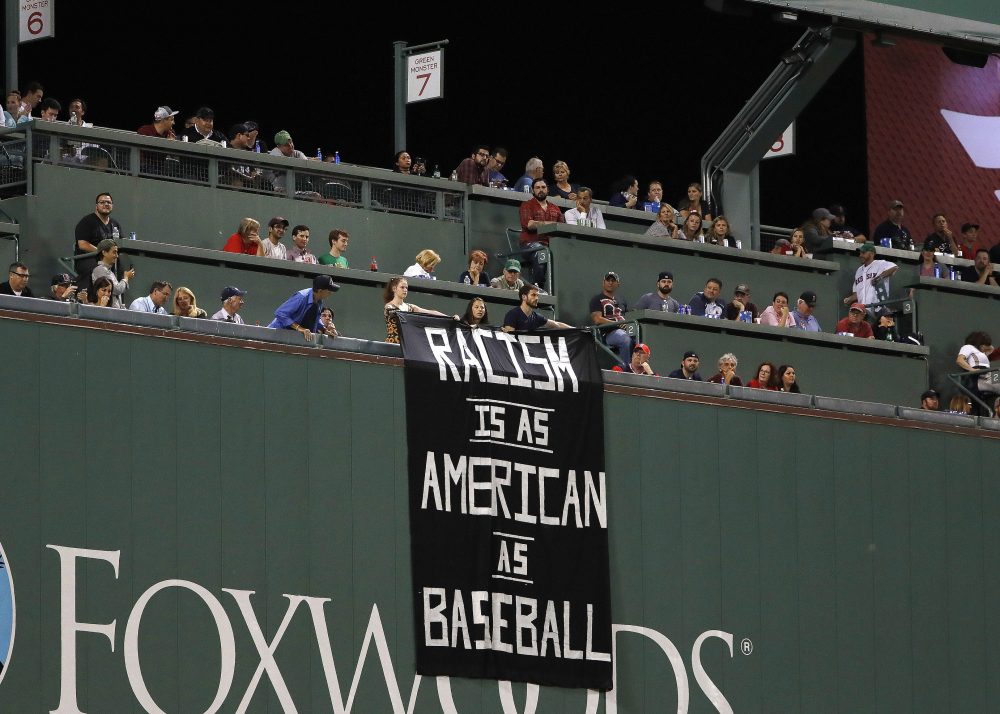 Current events are overshadowing baseball again: first the coronavirus and more recently the protests over police brutality. At the center of those protests is the systemic racial bias in the criminal justice system, allowing officers to use force against nonwhite citizens with impunity. Baseball has its own ugly legacy of racism which the league often seeks to deflect by reminding us of Jackie Robinson. But integration didn’t forever end bias in the sport. Racism continues to permeate the game, and the more we ignore it, the more it festers.

For some, it’s uncomfortable to even begin a conversation about this topic. Most fans go to baseball as an escape from the harsh truths of the real world, but unfortunately baseball’s problems can’t go ignored. Black players face backlash in clubhouses and on the field from racist opponents. Racist mascots and fan traditions persist in the league, much to the embarrassment of the league. The analytics revolution offered another excuse for not hiring Black coaches and front office staff.

For the most part, these effects are small. The additional probability of a strike being called against a Black player is in the single digits. Ejections are rare, so there’s a limit to how much bias there can impact players. It’s tempting to call these differences rounding errors and move on. But unfortunately, ignoring the effect of racism allows it to perpetuate itself.

Take the video game Out Of The Park Baseball. It’s one of the best baseball simulation engines out there and a joy to play as well. I’ve loved playing past editions of the game and even used it for research in articles. Sadly, it doesn’t take much looking to see how racism has infiltrated even its electronic confines. A mini-study by Twitter user Jacob M. Mack showed that the personality traits assigned to players of different races were highly disparate. White players were much more likely to have the “Captain” personality trait, while Black and Latino players were more likely to be “Selfish” and “Unmotivated.” Leaving aside the highly relevant fact that we know very little about what players are actually like behind closed doors, these patterns are reprehensibly racist.

It doesn’t take a genius to see what’s going on here. Speaking charitably, OOTP’s designers and roster creators may not have assigned these traits with racist intent. Perhaps they were simply encoding popular conceptions of these players into their game, reproducing a bias that already existed among announcers or reporters rather than creating a new one from scratch. The racism of OOTP’s personality traits may have been driven by laziness rather than malice.

But that’s not an excuse. To truly reckon with racism in the game, it’s necessary to be proactive and to confront it where it appears. The bias may not have come from OOTP, but it came from somewhere and they decided to uncritically transmit it on. Ignoring that original bias allowed it to reproduce itself in a new form. OOTP has stated that they’re “confident the personality distribution can be explained by random variance, due to extremely small sample size,” but that no matter the cause, the result was unacceptable. They have since worked to adjust the distribution in a more even manner and that update will arrive in the next patch.

Without aggressively confronting racism, it has the tendency to multiply. Consider OOTP: gamers who enjoy it may learn to value Black and Latino players slightly less because of the biased personality traits. Without even knowing they are doing so, they may become subtly inured to looking down on Latino players of equivalent skill, due only to invented personality deficiencies. The human brain has a tendency to subconsciously generalize: if it sees that Black players are bad in one context, it may assume they are bad elsewhere.

Unfortunately, racism flourishes within the confines of baseball’s front offices as well. A study I did with Ben Lindbergh last year on tens of thousands of scouting reports from the Cincinnati Reds around the turn of the millennia showed how evaluators described white and Black players in subtly (and sometimes obviously) different fashions. 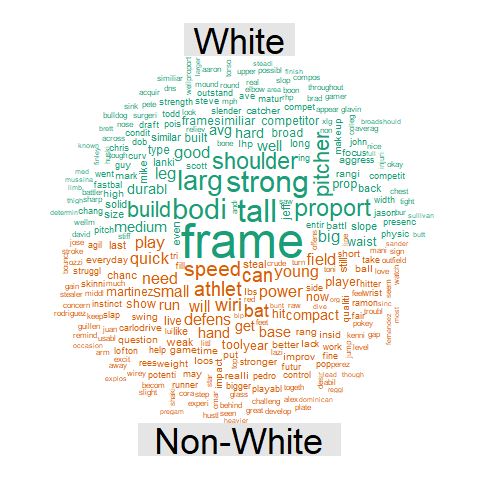 The above wordcloud shows some of the most notable differences by race, derived from the written freeform comments offered by scouts. (It’s necessary to cut the endings off words to do this analysis, so “bodies” becomes “bodi”, which is why some odd non-English-seeming verbiage is in there.) They were quick to use words like “good,” “strong,” and “large” on white players, while dropping less flattering phrases on non-white prospects (“weak”, “skinny”, “crude”). Scouts were also more likely to assign a host of negative adjectives to nonwhite players’ less quantifiable skills, factors like approaches, aggression and mechanics that don’t fit on the 20-80 scale. “Questionable” aggression ratings fell on nonwhite players twice as often as on whites, for example.

(As a side note, the negative sentiments expressed against nonwhite prospects were wholly unpredictive of a player’s subsequent success in the league. In fact, in re-analyzing the data I found that Black prospects were systematically underrated relative to their white peers, at the rate of ~1 WAR per player. There’s a significant opportunity for a less racist front office to exploit a more racist one by trading for their undervalued and underappreciated nonwhite stars. Anti-racism can be a potent market inefficiency.)

Racism within front offices is more dangerous than ugly words in a video game. It could, and surely has, impacted the trajectories of players’ careers, screening out deserving Black players from getting the chances they deserved. For the players who ran the racist gauntlet, it may have changed their view of the game or their talents for the worse. Struggling against evaluators who systematically underrate you because of earrings or hairstyles would take a toll on a person.

My point is not to shame the Reds scouts who wrote these reports. It’s to acknowledge that race—and biased judgments based on it—pervade baseball. Racism shapes talent evaluation and clubhouse chemistry and player development and on-field action and umpire decisions and front office hiring. Even if the effects are subtle or small for a given play, they are enormous when aggregated over the hundreds of players and millions of pitches that constitute a full season.

Ignoring racism or hiding behind the colossal shadow of Jackie Robinson doesn’t make these biases disappear. Instead, ignorance allows them to flourish and multiply. Baseball’s stakeholders, all of them, including analysts and writers like myself and fans and front office personnel, ought to confront and describe racism wherever it is, dragging bad behavior into the light. As ugly and uncomfortable as that process may be, it’s the only ethical way to move forward. It’s the only way to start to clean racism out of the game.

UPDATE: This article was updated to include OOTP’s response to the issue regarding personality trait distribution.

You need to be logged in to comment. Login or Subscribe
Laura Peebles
Thank you for the analysis. I don't play OOTP, but your article certainly wouldn't encourage me to do so. Have contacted them for comment? Did they respond?
Reply to Laura
Robert Arthur
I have not contacted them but others have. They did not respond. https://twitter.com/forrestwastaken/status/1268329883215659010
Reply to Robert
Israel Negron
That is not correct. Markus Heinsohn addressed the OOTP issue the day it was made public. Do a better job of reporting.
Reply to Israel
Craig Goldstein
They had not responded to previous requests, as Rob linked to. They did respond the next day, which I've updated the article to include.
Reply to Craig
Robert Arthur
Appreciate you mentioning that. Should have checked before I commented. I'm glad they are correcting some of these profiles.
Reply to Robert
Craig Goldstein
They have since made a post which we'll be linking to within the article: https://forums.ootpdevelopments.com/showpost.php?p=4654360&postcount=18
Reply to Craig
Justin
This is a terrific article, and a deeply important one at that.
Reply to Justin
Joseph Dolney
My favorite is the "scrappy" label. I can virtually guarantee that greater than 90% of the players labeled scrappy are white. I guess the inference is that players of color are naturally more athletic so they don't need to "hustle" as much. I enjoyed watching Josh Harrison play for the Pirates. He played every game like it was going to be his last. I could be wrong, but I don't think that he was ever labeled "scrappy". I wonder what his personality trait is rated on OOTP?
Reply to Joseph
John Metzler
In my current sim he actually just retired, but it shows his personality class was Prankster and he was greedy. The editor also shows (on the game's 0-200 scale) below average work ethic, intelligence and adaptability.
Reply to John
newsense
Rob
This is one of the best articles you have ever written. IMO, you sometimes don’t think deeply enough about what the data could be saying; that is not the case here.
Reply to newsense
John Metzler
Thank you for the link to the OOTP tweet. I just started playing it and it wasn't long before the discrepancies in personality traits across race became noticeable. Wasn't sure if it was just my particular sim, pure randomness, or what. So it's good to see someone gather and present the data. Hopefully OOTP responds and addresses the seriousness of perpetuating stereotypes and racial biases. Small things like this can be learning experiences and catalysts for change if we want them to.
Reply to John
Maureen Mielke
Good grief. Let's look for "racism" in every book and cranny and let no rock go unturned. It gives alot of people in certain media something to talk about and therefore justify their employment I guess?
Reply to Maureen
morro089
To clarify, we should not look under every rock to root out racism?
Reply to morro089
Jeremy Darnell
Yes, let's ignore it instead. And then cast aspersion on others for pointing it out. It's a pertinent and worthwhile discussion. But if it bothers you, don't take part in it.
Reply to Jeremy
Richard Pollock
Very enlightening piece. Enjoyed it very much.
Reply to Richard
brewerstt
I'm not yet conversant on OOTP, but it kind of shocks me that any game would ascribe clearly negative and unsupportable personality traits to living people, merely to add a dimension to the game. I would not be surprised if they got sued.
Reply to brewerstt
Scott
Please change the name of your site to Woke Baseball. Like all Leftism this article makes claims that are not supported by statistics or evidence and are instead based on wrongheaded opinions and the idea that any outcome that is not exactly proportional means RACISM or "Hey, this guy said this happened to him one time."
Reply to Scott
Frank Schneider
I know I’m coming in late in this - hard to read about how the owners are trying to collect all the money when we’re living in a pandemic - but what would a wordcloud for the annual prospectus look like?
Reply to Frank