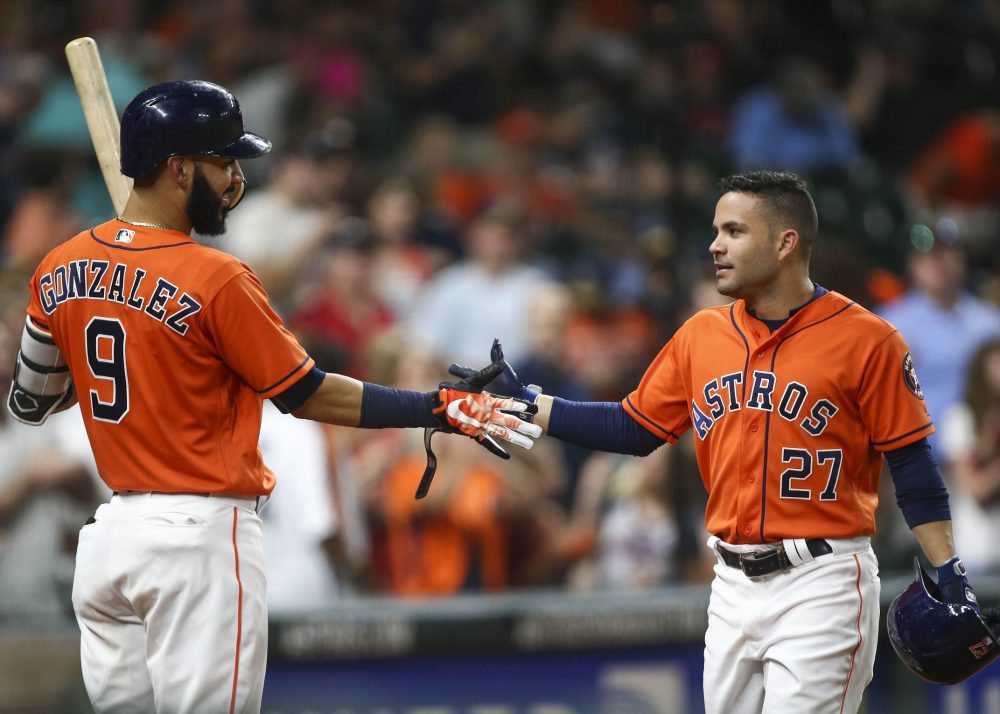 In January, Baseball Prospectus’ Robert Arthur analyzed the effectiveness of the 2017 Houston Astros’ sign-stealing scheme. To do so, he used a dataset created by disheartened Astros fan Tony Adams, who charted every pitch of almost every 2017 Astros home game. Adams identified the batter, opponent, pitch type, pitch outcome, runners on base, and most critically, whether or not there was an audible bang before each pitch. Banging was intrinsic to the Astros’ scheme, as they would bang if and only if the impending pitch were offspeed.

Inspired in part by Arthur’s research, we conducted our own study on Adams’s dataset. First, we addressed Arthur’s question: How effective was the Astros’ scheme? Like him, but with different specifications, we found that because the Astros did not always correctly decode the opposing signs, their scheme was not particularly effective. Also, we addressed a second question: Are there any telltale patterns of cheating that can indicate whether the cheating stopped in 2018 or continued through 2019? While the data cannot tell us whether the Astros cheated in 2019, we did find a particularly interesting pattern. What follows is a condensed edition of our study.

First, we run logistic regressions on Adams’s dataset to find whether sign-stealing benefitted the Astros on a pitch-by-pitch basis. Logistic regressions are used when the dependent variables are binary dummy variables, that is, equal to 1 or 0. Our first dependent variable is SWING, which equals 1 if the batter swings at a pitch. Our second is CALL STR, which applies to taken pitches. It equals 1 if the umpire calls a taken pitch a strike. In contrast, our last four dependent variables apply to swings, not takes. These variables partition swings into four outcomes: whiffs (WHIFF), foul balls (FOUL), balls in play (IN PLAY), and home runs (HR). We do not break IN PLAY down further into hits versus outs because the effects of cheating on hits versus outs are nearly identical.

While CHEATING applies to all pitches in our sample, ACCURATE and INACCURATE only apply to pitches where CHEATING equals 1. Specifically, ACCURATE equals 1 when the pitch is a fastball with no bangs or an offspeed pitch with a bang. On the other hand, INACCURATE equals 1 when it is a fastball with a bang or an offspeed pitch with no bangs. We find that when the Astros cheated, they correctly identified the incoming pitch 82.0 percent of the time.

In Table 1, we regress each dependent variable, first on CHEATING and then on ACCURATE and INACCURATE. In addition, each regression has batter-opponent fixed effects. An example of a fixed effect is Jose Altuve batting against the Oakland Athletics. These effects control for differences between some batters, such as Altuve, who used the scheme less often than other batters, such as Marwin Gonzalez. In addition, losing teams often did not try as hard as winning teams to protect their signs. As a result, omitting the effects could bias our coefficient estimates.

In this part, we look for sign-stealing in all Astros games from 2017 through 2019 rather than just in 2017 home games. Unfortunately, we can no longer know which pitches the Astros were cheating on. However, we can take the patterns from Adams’s dataset and apply them to Statcast pitch-by-pitch data from 2008 to 2019. Because of reports that cheating may have occurred on the road as well as at home, we include road games in our sample. Also, while we began from the belief that cheating occurred in 2017 and 2018, we are initially agnostic in regard to 2019.

Figure 1: Difference in Differences Graphs of 2B Splits, Statcast Dataset 2008-2019 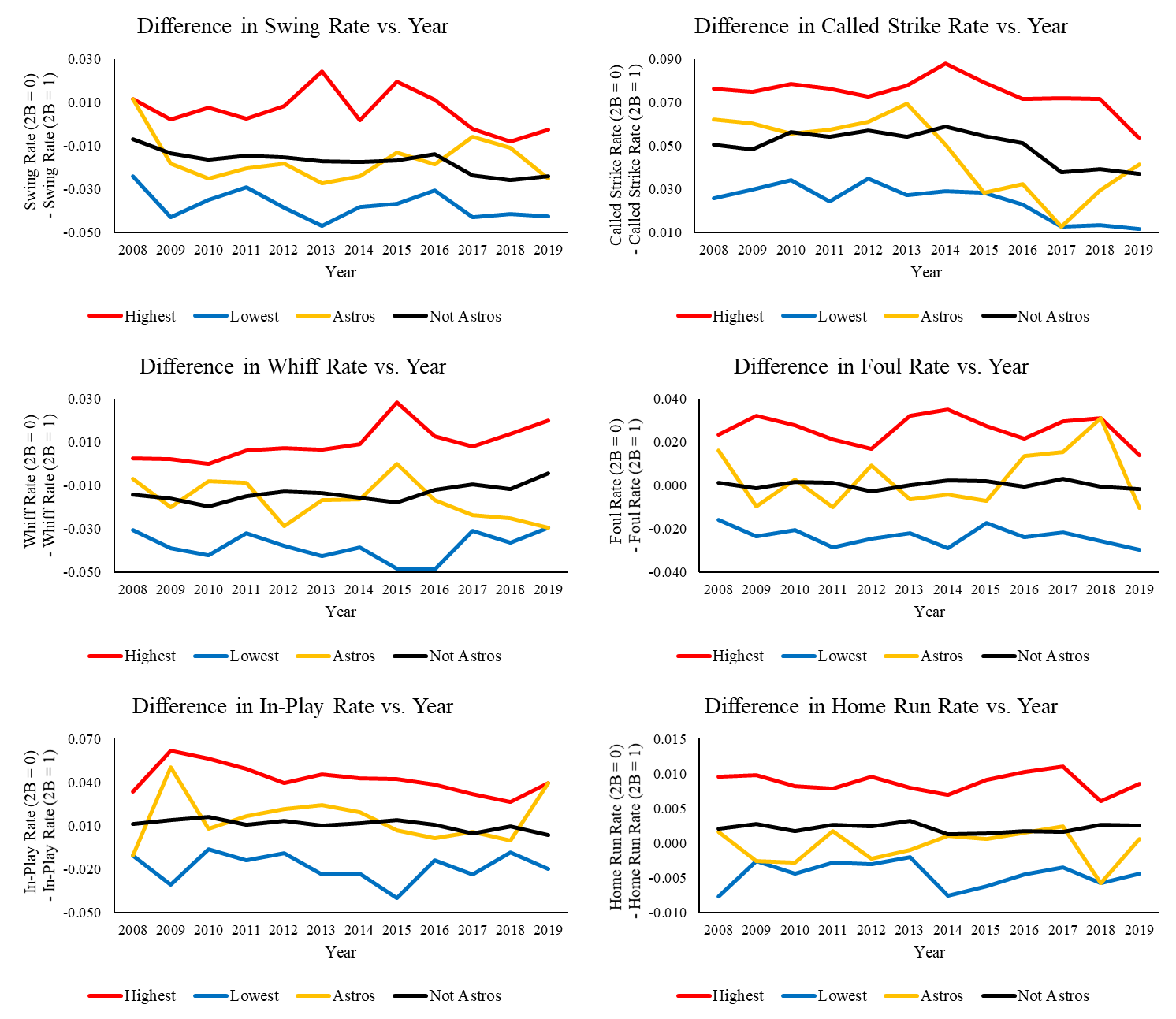 Therefore, there are three possibilities. The first possibility is that Manfred correctly concluded that the Astros did not cheat in 2019, and their unusual whiff, in-play, and fair ball rate splits are statistical flukes. In contrast, the second possibility is that the Astros got better at cheating in 2019. Specifically, there are two ways to get better at cheating. The first way is to cheat only when confident the stolen signs are accurate. If the Astros made this improvement, they would have cheated less often with a runner on second. Thus, their swing and called strike rates would revert to normal because there would be fewer cases of inaccurate cheating. In fact, per Adams’s dataset, there is virtually no difference between called strike rates when cheating accurately and those when not cheating. Furthermore, the second way is to learn to put balls into play when cheating accurately (rather than foul them off). Doing so would lead to the observed decrease in the Astros’ foul rate split, along with the observed increases in their in-play and home run rate splits. Meanwhile, their whiff rate split would remain low, as we also observed. As such, there is evidence to support the belief among many players that despite additional anti-sign stealing rules implemented before the 2019 season, the Astros continued cheating in 2019.

However, the third possibility is that the Astros did not cheat in 2019, but their unusual splits are not statistical flukes. Rather, because other teams believed the Astros were cheating with nobody on second, those teams may have been thrown off their game. In the words of AJ Hinch during the 2019 ALCS against the New York Yankees, who suspected the Astros of whistling to convey stolen signs, “Had I known that it would take something like [whistling noises] to set off the Yankees or any other team, we would have practiced it in Spring Training. It apparently works, even when it doesn’t happen.” All in all, while the data cannot tell us whether the Astros cheated in 2019, the data can provide valuable insight into what may have happened last season.