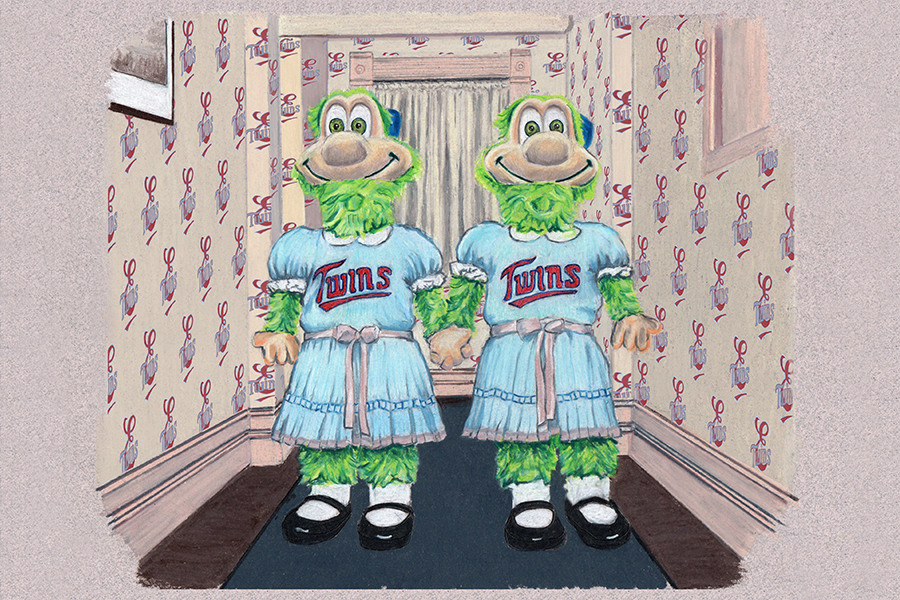 Every Tuesday and Thursday,Too Far From Town shines a light on the 42 (really 43) minor league baseball teams in danger of losing their major league baseball affiliations, effectively leaving them for dead. Today we focus on the Elizabethton Twins, a Rookie-level affiliate of the Minnesota Twins. You could take in the previous installments here.

Others have insisted Secretariat is secretly about the E-Twins. 100 percent of those people saw this 1998 photograph by Brian Peterson in the Star Ledger from O’Brien Field. 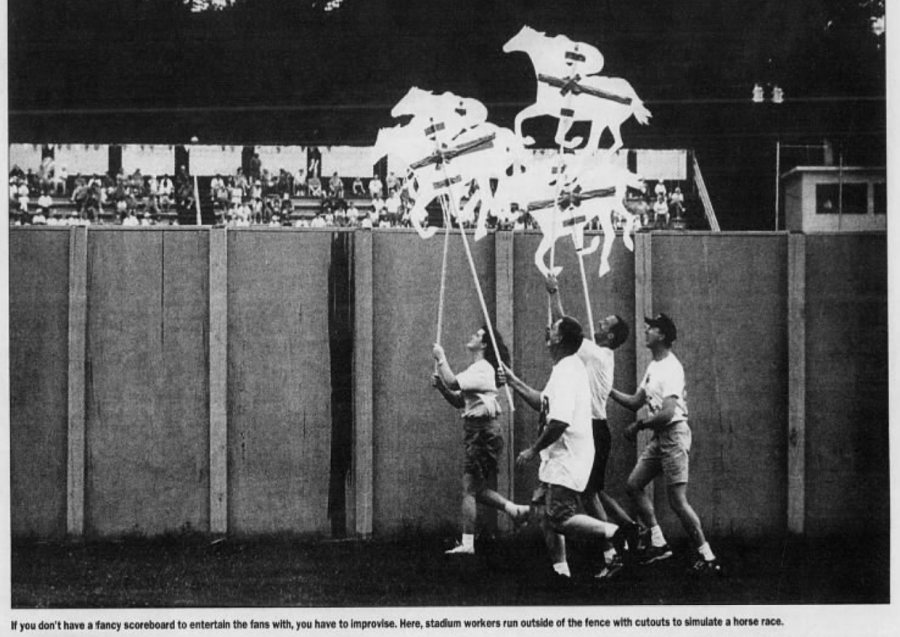 But The Shining? Nobody knows what the hell that is really about. The whole thing about the movie acting as Stanley Kubrick’s confession he directed a staged moon landing is a red herring. It’s about the Elizabethton Twins. Kubrick whispered this in my ear at a lavish yet tasteful New York party.

Oh I’m sorry, did you just say I am being ridiculous? By all means, explain to me how Stanley Kubrick faked the damn moon landing and chose a Stephen King adaptation to confess. Listen to yourself. I mean really listen.

Okay, now that you are feeling bad about yourself, I will continue.

The creepy twins are not in the book. That was Kubrick. Guy is a genius. 40 years after it premiered, we now understand the girls pleading to come play with Danny, forever and ever and ever, is not actually creepy. The Elizabethton Twins, and all of the teams featured in this column, would love to keep playing forever.

Who are the twins supposed to be a weird tribute to? Maybe Gertrude Bishop and her daughter Paula. Gertrude was one of the first boosters of the E-Twins when they began play in 1974, and the two housed many players through the years, including Gary Gaetti, Kent Hrbek, and Kirby Puckett, charging 35 bucks for rent. The team celebrated Gertrude’s 100th birthday in 2017, where she threw out the first pitch.

Maybe it’s the women who were both known in the Elizabethton community as “Miss Jane” — Jane Crow and Jane Hardin. Crow was with the E-Twins from the beginning, serving as team secretary for 40 years. Hardin ran the concessions. At the ballpark, Miss Jane’s Hardball Cafe these days offer something called the Fried Crown Bologna sandwich for three bucks. Crow and Hardin also served as landlords for players over the years. Joe Mauer lived in Hardin’s home during the summer of 2001. This fact is mentioned in her obituary.

Maybe the twins are Joe Mauer and his brother Jake, who were Elizabethton teammates in 2001. Jake in fact was Joe’s roommate at Miss Jane’s place. It was as adorable as it sounds. 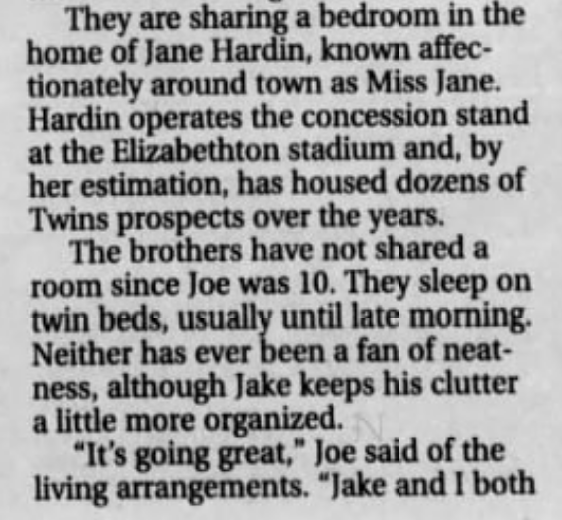 Joe was a big star from the very beginning, even though local little leaguers thought his last name was “Morrow”, and a resident only referred to him as “The Big Boy.” The Elizabethton crowd booed during his first professional at-bat, because the pitcher wouldn’t throw a strike. Like a good brother, Jake was there to teach Joe some unwritten rules he didn’t know, like not talking to a friend on the opposing team until after the game. (Jake went on to manage in the minors while Joe delivered milk.)

Or maybe the twins were former Elizabethton park commissioner Carmon Dugger and Joe O’Brien, of Joe O’Brien Field fame. In December 1973 Dugger convinced Jim Rantz of the Minnesota Twins that Elizabethton, Tennessee was the perfect place for the franchise to raise their kids. He told Rantz he would move the lights so they were actually behind the fences in their local ballpark, and yes he would also close the road that uh, went through the field. Rantz took up O’Brien’s offer to spend the night at his place, where they went through most of a bottle of Jack Daniels. After that night, or possibly that very night, Dugger took matters into his own hands, channeling his inner Jack Torrance, or Robert Moses. 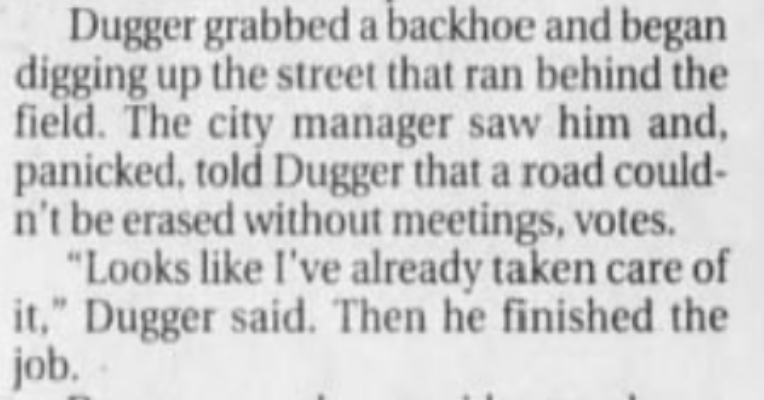 Jack Torrance is obviously Ray Smith. Smith played for the E-Twins in 1977 and lived with the Bishops. He was Minnesota’s backup catcher from 1981-1983. He went back to Elizabethton in 1987 and never left, managing the team all this time except in 1995-2001, when he was a coach. 2019 was the first losing season for the E-Twins in 31 years (they finished 33-34). As manager, the team won the Appalachian League title nine times, including in 2017 and 2018. Smith won the Manager of the Year award seven times. He was inducted into the Appy League Hall of Fame last November.

Ray Smith was there to listen to 17-year-old Pat Mahomes Sr. talk constantly about football. He was there to nod when Denny Neagle proclaimed “I want to let everyone know I’m not a fluke.” He was there in 1991 to shake future Minnesota closer Eddie Guardado’s hand after he threw a no-hitter against the division champion Pulaski squad. He was there, 11 years apart, to help acclimate Australians Grant Balfour and Liam Hendriks to the United States. He was there when Denard Span almost got his roommate killed after he bunted with a five-run lead in the 8th inning like some sort of maniac. He was there for Miguel Sanó and Eddie Rosario’s Mantle-Maris battle to break the Appalachian League single-season home run record. Byron Buxton, Mitch Garver, Max Kepler, José Berríos, Brusdar Graterol. There, there, there, there, there.

Ray Smith is a helluva caretaker.

He’s always been the caretaker.

You need to be logged in to comment. Login or Subscribe
redwall
Loved this article - they're my hometown team, and this captures the weirdness and greatness of the team well. (There's an error, though - it's Joe O'Brien, not Jim!)
Reply to redwall
Craig Goldstein
I've fixed that, thanks for letting us know!
Reply to Craig