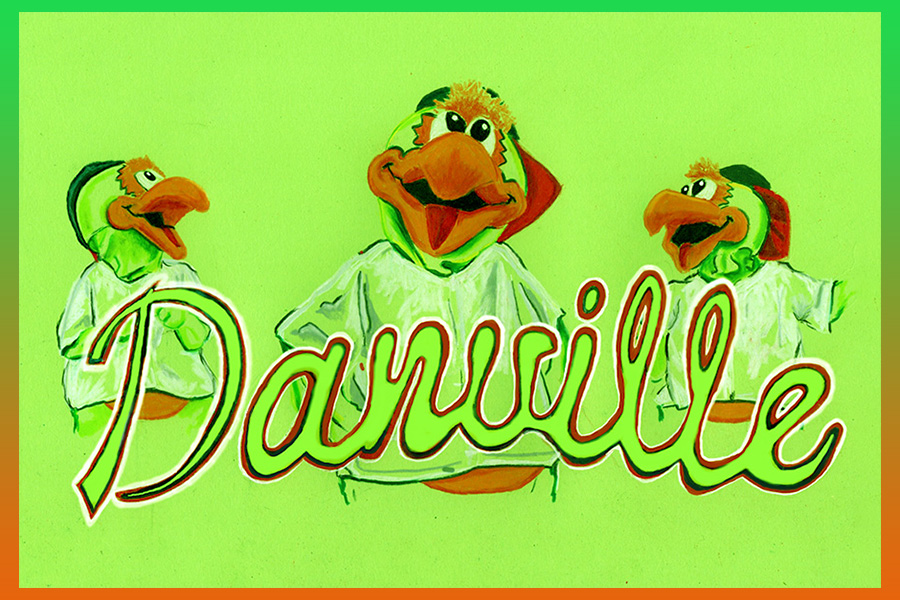 Every Tuesday and Thursday,Too Far From Town shines a light on the 42 (really 43) minor league baseball teams in danger of losing their major league baseball affiliations, effectively leaving them for dead. Today we focus on the Danville Bloopers, a Rookie-level affiliate of Atlanta’s. You could take in the previous installments here.

Second time long time: How do I get to American Legion Field at Dan Daniel Park?

Get a baseball scholarship to Texas A&M. Decide not to go. Become a valet, cook, janitor, cart boy, waiter, ski lift operator and machine shop employee in various states west of the Mississippi. Sometimes live in the back of your green 1995 Dodge pickup. Try baseball again for a semester at a small college in Oklahoma. Quit baseball again. Go to rehab. Get a spiritualist you followed to California say “Evan, maybe there’s nothing wrong with your life at all. Maybe you just need to chill.” Join up with a Division II school’s baseball team. Get drafted by Atlanta in the 23rd round.

What works for Evan Gattis doesn’t necessarily work for everyone.

Fine. Drive to Virginia and use context clues.

Is Danville named after this Dan Daniel dude?

No. Danville is named after the Dan River.

I’m sorry, did you say the Dan River?

Okay, who named it the Dan River? Don’t say ‘Dan did’.

Plot twist, it was a Bill: Colonel William Byrd. In 1728 he was part of a survey to figure out the boundaries of Virginia and North Carolina when he came upon the south branch of the Roanoke River, and the Colonel took a gander and said it looked like its name was Dan.

Apparently nobody knows for sure why he named it that.

The best guess out there is Byrd got it from the Hebrew Bible phrase “From Dan to Beersheba”, as in Dan, the northernmost city of the Kingdom of Israel in the Bible, and Beersheba, the largest city in the Negev desert of Southern Israel. From the tippy-top to the bottom, as it were. Funnily enough, Dan Daniel Memorial Park is north of Dan River.

So it could have been Beerville?

That is definitely the takeaway here.

How much are the Chick-fil-a sandwiches at the park?

Is Tony Womack from Danville, Virginia?

Are the other 2001 Arizona Diamondbacks from Danville?

I don’t think so.

Why does Danville sound familiar?

Maybe from the reference to its railroad in “The Night They Drove Old Dixie Down”?

Who did a better version of that Civil War song: The Band or Joan Baez?

Baez’s cover was a big hit but, I don’t know, it sounds too uplifting, considering

It’s from the perspective of the Baddies?

What’s Blooper’s deal? Why didn’t they name the mascot after a famous Dan?

Why not ‘Handsome Dan’?

Nobody seems to know. His whole backstory is he’s a big green bird that waltzed into the park one day in 1999 from the Brazilian Rain Forest. That’s literally it.

I guess? He always lets the kid he races from first to third win, but he’d be a total monster to not do such a thing. He likes to dance to “Sweet Caroline”, which isn’t original but not illegal. His listed weight is “Let’s just say I like to eat”, which is cute. He does flirt with the players’ girlfriends though.

Blooper was quoted as saying the following in a 2015 article: “The first week there were a couple of girls that would always sit on the right side bleachers, right next to the bullpen so they can talk to their boyfriends. I would go talk to them and then I would go into the dugout right before the game for the Star-Spangled Banner, and some players came up to me and said, ‘Hey, you can’t talk to those girls anymore.’ I couldn’t say anything, I could only do motions, but I guess I got a heads up.”

I’m asking the questions. Is there a John Rocker story?

You bet. According to Jeff Pearlman in that Sports Illustrated article, in 1994 Rocker would bite baseballs and let throws from the Danville catcher hit him in the chest.

What a chill guy. Is there a Jeff Francoeur story?

Frenchy’s first professional dinger in 2002 was accompanied by thunder and lightning. His manager said “it was a little spooky.”

What former Danville player had the cheeriest sounding name?

Got to be Mo Christmas.

Why won’t you use the real nickname of the team?

Because you’re me. Is that also why you didn’t mention Blooper’s second favorite song is the “Tomahawk Chop”?

Do you think you’re better than the people of Danville?

No. I do think some people prefer Joan Baez’s version for the same reason I said I didn’t prefer it to The Band’s though, you know? And it makes me sad to think the response to writing something like I just did, simply figuring we all need to love each other no matter the color of our skin or we’re doomed, or in Blooper’s case, fur, something so simple and as natural as breathing to say, is to call me a “virtue signaler” or “bleeding heart liberal” or “Snowflake Dan”.

Yeah well I don’t see you on any picket lines or boycotting Atlanta or Cleveland games dude.

Since I’ll be accused of lecturing anyway: We should do what makes us happy, as long as you don’t inflict pain on another living being when you do it. It’s not that hard (it’s sometimes rather hard). Losing this team would hurt a community’s morale and commerce. It wouldn’t be fair to the Dansville citizens with love in their heart with the true capacity for empathy. You can’t break someone’s chest open and see what their hearts are made out of without killing them, unfortunately. Blooper on the other hand…

You need to be logged in to comment. Login or Subscribe
Jeffrey Hill
I notice you are not getting a lot of comments on these, which is too bad. Each one has been enjoyable, informative, humorous, and creative. I like all the different approaches taken.

I think there is a separate Internet page here, with a theme of remembering the minor leagues (if they disappear). Supported by ads for merchandise for all the clubs---they can form a joint venture to sell collectively to delete inventory.
Reply to Jeffrey
Roger Cormier
Thank you very much Jeffrey, we appreciate it.

We'll see about that separate page idea.
Reply to Roger