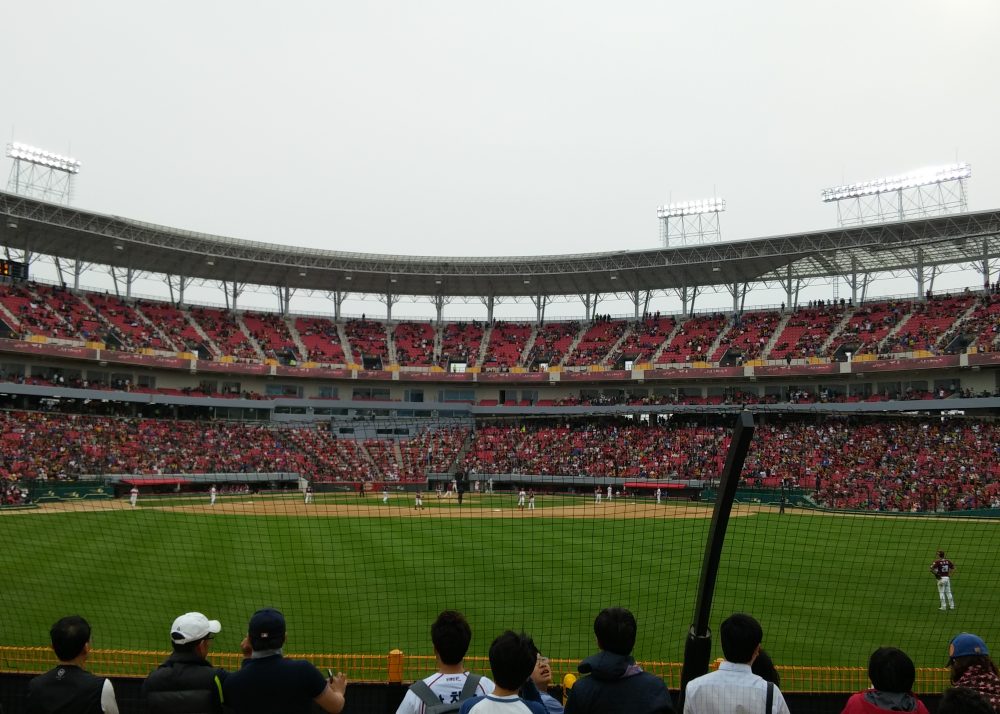 No comparison between KBO and MLB teams is going to be perfect. People have compared Doosan to the Yankees, and certainly right now, it feels that way; they’re the clear reigning dynasty in the league, finishing with the best record three of the past four years. They’re a large-market team. But Boston might feel more appropriate, if you’re willing to forget 2019 (or feel cynical about Doosan’s 2020). They play in a beloved, yet crumbling stadium. They have a rich history, reaching back to the beginning of the league, and yet they, like Boston, have had their difficult times. Even that doesn’t map perfectly, of course, because the extreme pitcher’s park (and the dead ball) inspire a level-swinging, 1980s Cardinals type of offensive makeup.

See Every Article in Our KBO 2020 Preview Series

The stadium, its home with the coastal and international city of Incheon, the consistent success: All of these make the Dodgers a pretty safe fit for a strong ballclub. But the team colors, the reliance on organizational development and depth, and the consistency are all Cardinals hallmarks. There aren’t too many better franchises to look like, regardless of which way you lean.

Some of these are easier than others. First, there’s the dome, and the smaller capacity that makes the Heroes a smaller market than one would expect from a team in the nation’s capital. Then there’s also the parallels in performance, as Kiwoom was mired in the cellar for the first half of its existence before emerging as a consistent, quality team. And there’s the team’s arrival as symbol for modern roster construction. So yeah, no questions here.

The Bears/Twins rivalry isn’t quite the same as the Cubs/White Sox, but only because the Chicago version is a little more even. The Twins are a Southside ballclub that don’t even get their own side; they have to share their digs and watch their big brother win pennants on them. Like the White Sox, however, there’s a pulse in LG, and the hope that they’ll be able to open a new chapter on a franchise with a long history—much of it suffering.

While Petco is the clear visual inspiration for the ballpark, there’s some Target Field elements as well, and NC compares well as a smart, tight-knit small-market team.

KT hasn’t had a lot of time to establish their identity, but there’s a lot of Ray Kroc here. They’re generally among the lowest run-scoring teams in the league, and using free agency to spackle the roster instead of building through youth (it’s amazing how many weird one-year stints the Padres had back then). It’s been a slow start to the franchise, as it was for San Diego, but perhaps the tide is turning? Or at least, perhaps, the Padres can offer optimism that a franchise can survive while being the Padres.

Again, not a perfect parallel. But Gwanju is a smaller market, and an industrial one, which maps well onto the midwest. It’s also a team with a rich history, but a distant one, much like the current form of the Reds looking back on the Big Red Machine. If you want to do a thought exercise, you could also think of the Tigers as being KBO’s Yankees, in an alternate universe where the 90s never happened, and the Scott Sanderson/Ed Whitson era of New York just kept going forever. Sorry, that got dark.

Like the Giants, the Lions have a long and rich history, although ironically Samsung is one of two teams to never relocate or rename themselves in KBO history. The timing of their recent dynasties, and the hard times since, also overlap. The Diamondbacks should hope that the Samsung curse of departing free agents doesn’t somehow transfer over to Madison Bumgarner.

The Eagles are a solid organization, but not quite good enough to overcome the twin handicaps of its small market and smaller stadium. There’s something pure about Eagles fandom, detached from winning and losing, just happy to be at the table and enjoying baseball alongside everyone else. The Royals fit the first half of that description, but there really is no comparison to the second; no American city could handle losing, for that long and that hopelessly, with the acceptance of Daejeon.

The Giants are one of the most popular teams in the country, with one of the largest markets, and one of the longest histories. And yet the franchise has struggled mightily over the past quarter-century, often through front-office ineptitude and mismanagement. It’s very much the New York Mets, down to the bright spotlight and constant intrigue surrounding the team, even down to the fact that like the Mets, the Giants aren’t that bad. They have their periods of resurgence, only to choke in the playoffs and then dull the excitement with some media gaffe. 2020 is the beginning of a new era, results TBD, but here at the bottom, between Hanwha and Lotte, you have the two best kinds of bad teams: the yeomen, and the fools. It’s always fun to root for (or some German word that somehow means against-for) the fools.

You need to be logged in to comment. Login or Subscribe
Byron Hauck
I've been saying I'm going to let the standing sort it out for me between the Heroes, Twins, and Tigers, but you make a very compelling argument to keep half an eye on the Giants too. I'm determined to root against the Bears, though, since there's just been too much recent success rubbed right in the face of their neighbor.
Reply to Byron
Byron Hauck
I've hit a bit of a wall in my learning to read Korean to a useful level. I can sound out pretty much every name I come across, but it takes between 3 and 5 seconds, which is not going to be helpful when they throw someone's triple slash up on screen for half a second while they get ready to bat. The only names I can read without sounding out (Park, Lee, Kim, Min) are so common I don't think it's really going to help. At least there will be some ESPN English broadcasts!
Reply to Byron
Byron Hauck
Oh no I forgot other countries get to use fonts too.
Reply to Byron
Byron Hauck
I'm fine being the KBO comment guy. Turning it on and seeing a tarp and water pooling made me laugh longer and louder than I have in a while. Take that South Korea, you may have saved tens of thousands of lives by being a functioning government, but you cannot conquer the weather!
Reply to Byron
Craig Goldstein
but we're back!
Reply to Craig
Byron Hauck
I set the ESPN game to record and then got going on Twitch. Watched little brother Twins go up 3 on big brother Bears with a couple nice defensive plays thrown in. Now I'm going to sleep. Goodnight!
Reply to Byron