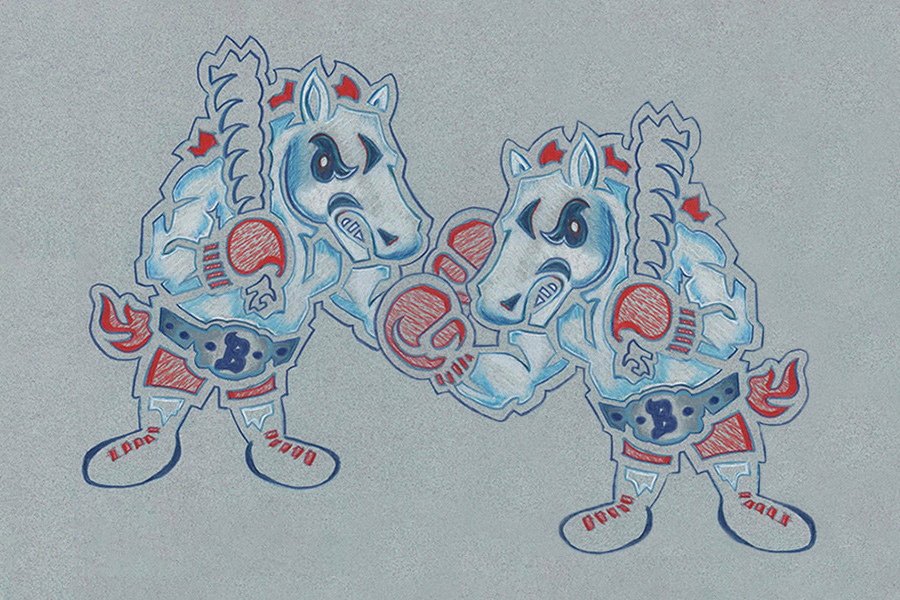 Every Tuesday and Thursday, Too Far From Town shines a light on the 42 (really 43) minor league baseball teams in danger of losing their major league baseball affiliations, effectively leaving them for dead. Today we focus on the Binghamton Rumble Ponies, a Double-A affiliate of the New York Mets. You could take in the previous installments here.

I don’t know how to set this up, so I am just going to go ahead at the jump and address the rumors: yes, Rowdy the Rumble Pony blocked me on Twitter. It was a Friday, specifically June 9th, 2017. It is not the worst thing in the world to have happen to you, but I still felt profound embarrassment. I imagined St. Peter asking me, “Listen, sorry, I have to ask this, we ask everyone, it’s a mere formality, I don’t even know why it’s here on this list… Have you ever harassed a minor league baseball mascot on social media to the point where you were blocked by them?” I imagined my mind racing, figuring he knew the answer already and, oh no, I’ve definitely taken too long to respond here, and before I knew it I was profusely sweating.

There was a reason to the perceived harassment, albeit not a good one. 2017 was the year Binghamton changed their team name for the first time in their history. After 25 seasons as the Binghamton Mets, they were now the Binghamton Rumble Ponies. With that came a new mascot. He was a pony always fixing for a fight. In every photo, even with children present, he wore boxing gloves. 2017 was also the year I became a social media star on #MetsTwitter, tweeting under the name of the Mets podcast I co-hosted at the time, which I all owe to bothering to learn how to make baseball GIFs quickly. I figured getting into an online feud with the Mets’ Double-A mascot would be amusing, a natural extension of the #brand. I have “figured” a lot of things in my life.

The block party only lasted a couple of hours, when Rowdy direct messaged me. If the intent was to make me feel like a pile of crap, the mission was accomplished. It turned out there was a human being inside of the Rowdy costume, with hopes and dreams, and one of those dreams was cultivating a character from scratch, and some jackass online was ruining everything. We made up, and maybe Rowdy thought summer was saved after all. But I was keeping a secret. 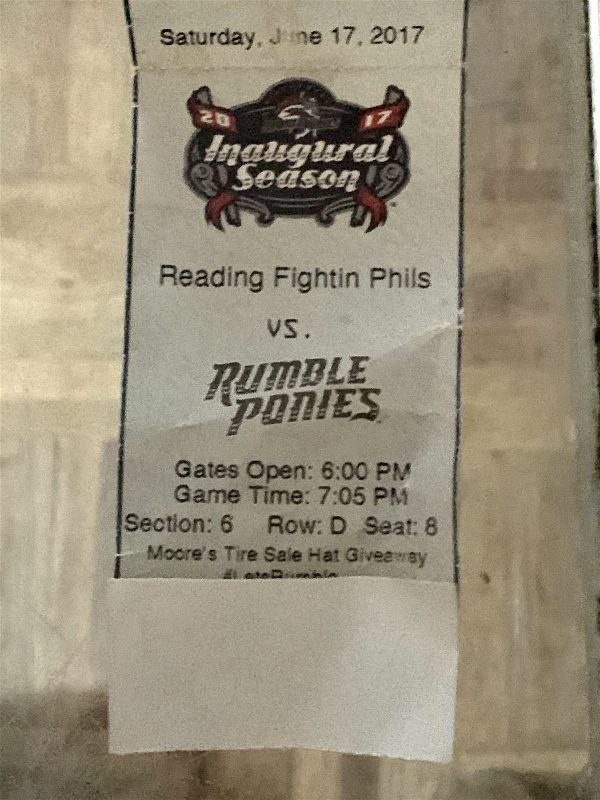 I made some online friends during the first half of the 2017 season as my follower count ballooned. One was JT, a blogger/editor at a Mets website. Another was Amy, a Binghamton resident who seemed to go to a lot of Rumble Ponies games (I later learned her mother has worked at NYSEG Stadium for a long time, possibly from the beginning.) From my recollection, by Memorial Day weekend JT and I accepted Amy’s invitation to go to a Rumble Ponies game. My feud with Rowdy was in full bloom, but hadn’t reached its apex/nadir. I wasn’t planning to pie Rowdy, or flick his ear, or steal his identity or anything remotely of that nature. I figured as a Mets podcaster/blogger/tweeter bigshot, it would make sense for me to check out the Double-A team in person at least once in my lifetime. Also sure, if I can sneak a photo with the equine pugilist, even better. But now, it was going to be a thing. I had eight days to warn the mascot I just signed a peace treaty with that he might meet his tormentor. I recall seeking advice from Amy over whether or not to inform Rowdy I was coming.

I did not warn him.

JT picked me up from some Metro North stop (I am a city boy and refuse to remember the name of any non-city in New York state.) He drove (city boy here never learned how to drive) us to Binghamton. It was something like a 90 minute car ride — enough time to determine neither of us was going to murder the other, or worse, smells bad, and plot an escape plan if Amy ends up giving serial killer vibes or smells like hot garbage herself. We met up with Amy at a bar/restaurant near the ballpark, catching glimpses of an eventual Met loss to the Nationals (Michael Conforto, Binghamton Met two years prior, was breaking out of his slump, so we were in decent spirits) . We went to NYSEG Stadium and sat right behind home plate. MiLB.tv’s feed of the game was apparently not working that day, so I felt a little special. In about the 6th or 7th inning we walked over to where Rowdy was holding court. We took a photo. Rowdy covered my eyes moments before the picture was taken. There was a tweet. 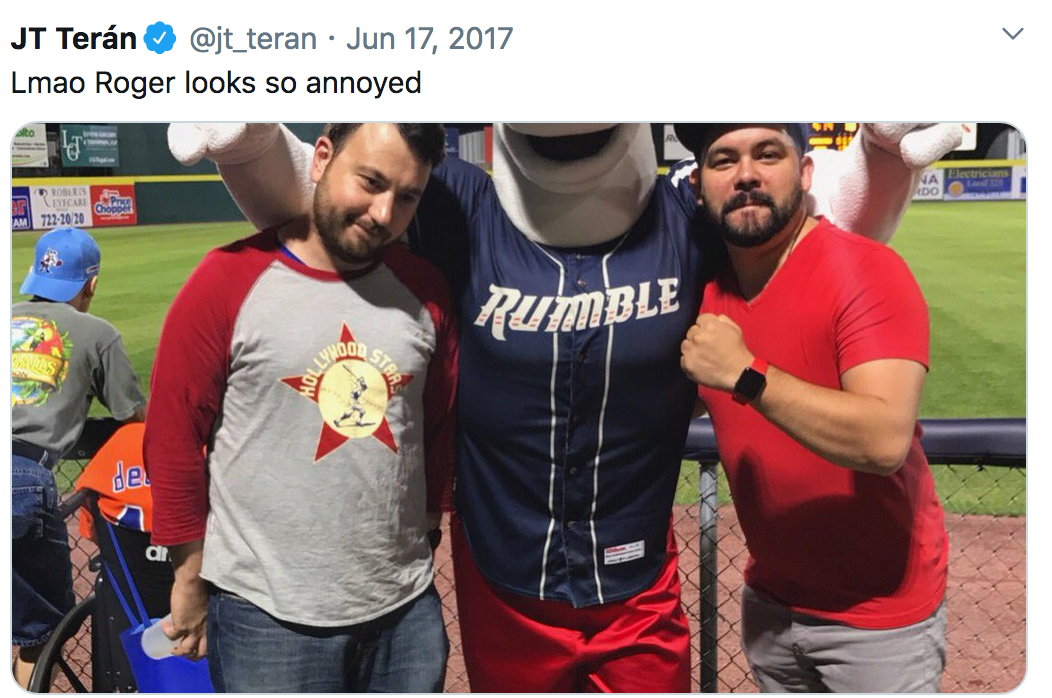 There was a response 12 minutes later.

He was no longer wearing boxing gloves all the time, but 12 minutes to respond with those large hooves is pretty impressive.

After the Rumble Ponies, I wanna say won, we went to the nice bar nearby, joking about the other, not so very nice bar across the street. After an hour, JT drove me back to his place. It was 11 p.m. or so when I was informed the Metro North doesn’t run in his neck of the woods that late at night and I would have to sleep over. I didn’t get mad, because he had probably mentioned this before and I likely simply did not believe trains stopped running because of something so arbitrary as time. He lent me jammie bottoms. I met his cat Walter. I sang “Do You Remember Walter?” by The Kinks to my new feline friend. I had been drinking.

I scrolled through Instagram a few weeks later when I saw JT post something from the bar/restaurant we went to before the game. His visits there over the next few months became more and more frequent. Amy at some point began to appear herself. I saw them again in person at the 2018 Queens Baseball Convention, where we said “The Mets will surely not be as bad this year” and “the Mets will surely not be as bad this year” adjacent sentences. They continued to star in each other’s social media content after that day through recently, when they went to Mets virtual prom together as quarantine roomies. Social media doesn’t just tear people apart, it brings people together too (with a major assist from minor league baseball). A thing like that.

As for me and Rowdy, we still catch up over the holidays. 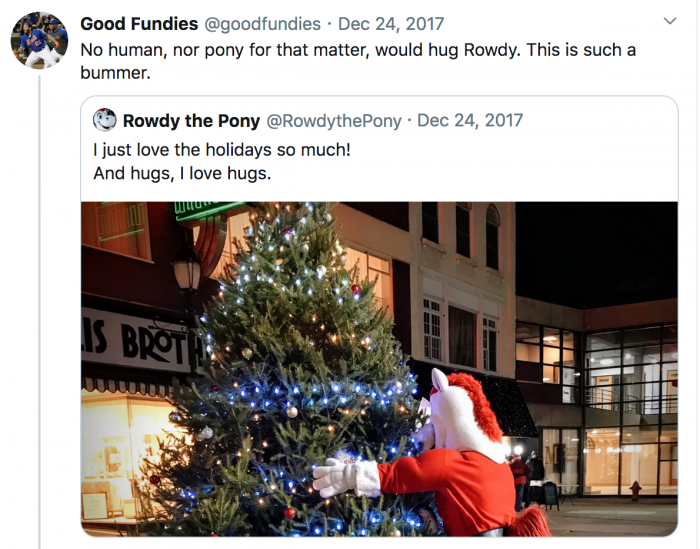 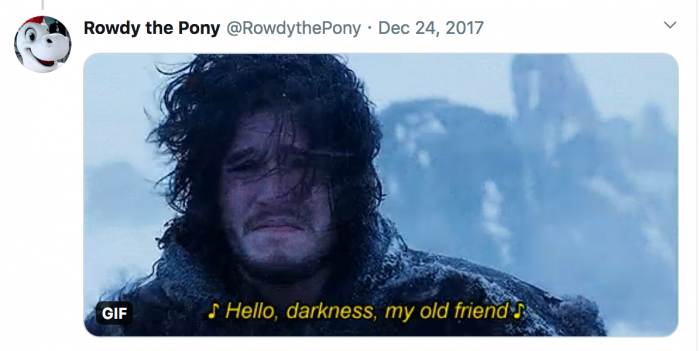