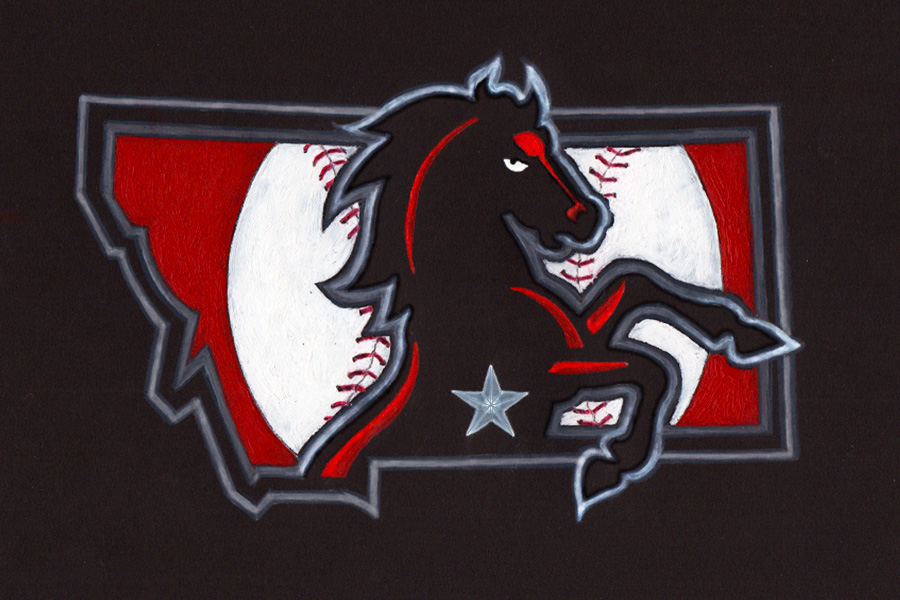 Every Tuesday and Thursday, Too Far From Town shines a light on the 42 (really 43) minor league baseball teams in danger of losing their major league baseball affiliations, effectively leaving them for dead. Today we focus on the Billings Mustangs, a Rookie-level affiliate of the Cincinnati Reds. You could take in the previous installments here.

Bob Cobb left Billings, Montana to make it in Hollywood, and after his vision came true by founding The Brown Derby restaurants, he along with attorney Victor Ford Collins purchased the Pacific Coast League team they would rechristen as the second coming of the Hollywood Stars. Cobb a few years later went back home to Billings to gift the city their own professional baseball team, and his masters-of-pretend friends Bing Crosby, Barbra Stanwyck, and Cecil B. DeMille tagged along for the ownership ride. The Mustangs played at a stadium named Cobb Field from 1947 until 2007, even though Bob Cobb did not build the thing. Same deal with The Cobb Salad, named after Bob Cobb, even though his chef Paul J. Posti might have invented it, or maybe it was his executive chef Robert Kreis. But it’s not called a Posti Perfection or a Kreis Kobbler, now is it? The legend that most grabs the imagination because it tells a relatable story states Cobb forgot to eat one day and, sure fine, cobb-led together a salad from whatever food was left over in The Brown Derby kitchen late that night. It doesn’t matter, because Bob Cobb’s legacy should be more associated with the Mustangs — that invention could not have been made just from any desperate, hangry person. Bob Cobb had to imagine it first.

I can assure you though your Billings Mustangs trivia question packet is not entirely full of inaccuracies. It is true the lone two young men who began their professional careers with the Billings Mustangs shortstop and much later in their lives inducted into the Baseball Hall of Fame played shortstop.

The first was legendary third baseman George Brett. George back in 1971 was known as Red Sox pitcher Ken Brett’s 6-foot, 180-pound younger brother when the Royals drafted him in the second round. The Billings Gazette readers got to know Ken’s bro a little bit if they picked up the July 11th edition. He was single, liked to hunt and fish, and wore the jersey number 11 for the Mustangs. That last bit was helpful, because in the previous week Brett was already proving to be someone who was either going to Cooperstown or become an all-time bust, and since this was the Pioneer League in 1971, you had to have been at Cobb Field to witness these amazing feats, or just use your imagination. On the 4th of July he hit two three-run home runs. He made a play in the home opener that was described by the Gazette thusly:

There was a second-inning catch that was “definitely big league.” Racing toward left field after a seemingly certain basehit blooper, Brett out-ran the ball, got it in the webbing of his glove, juggled it and then, falling down, caught the handle for the out.

The uniform number is helpful if you want to envision it. Maybe you could convince yourself you were there. Maybe you invented a salad Larry David obsesses over.

Brett committed 28 errors in 88 games on the field for Billings, and in late September this incredible sentence that I imagine activated imaginations all over appeared in newspapers:

George remarked briefly on his time in Montana in a 1989 Sporting News piece. “The memories are so vivid,” he said. “Taking the 13- to 14-hour bus trips, getting my $4 day meal money, and making my $500 a month.” He made no mention of that home opener catch or other specifics.

The second Mustangs HOF shortstop was legendary closer Trevor Hoffman. Trevor in 1989 was best known as eight-year Red Sox shortstop Glenn Hoffman’s 6 foot, 185 pound younger brother. He was in Billings the same year Brett fondly recalled the endless bus rides The Hoff was surely going through with less affection. Hoffman in 2018 admitted he could better remember the bad stuff (e.g. the three errors he committed in his first professional game, three of the 25 he would make in 60 games) more than the positive stuff (going 2 for 6 with 3 RBIs in his debut.) When told of the multi-hit beginning, Hoffman figured those hits were probably “a couple of duckfarts”. He said he remembered his general feelings from 1989 more than specific plays.

Yes, those type of things are easy to recall, you know, the uniform, what it looked like … the stadium. You’d think I could remember the playing stuff but it’s such a blur and a lot has happened since then, for sure.

It’s kind of a shame, since Hoffman’s position player days were not all bad. At short he recorded two of the three outs of a triple play. In one game he both tracked down a fly ball in shallow right-center and fielded a ball that ricocheted off of the third baseman to throw out a runner at first. Another time he perfectly executed a squeeze bunt. He more likely remembers the time he somehow got picked off of third. I wonder if he recalls his first professional baseball bench-clearing brawl, as remembered by a Butte Copper King named Randy Marshall. Marshall didn’t say if Hoffman threw any punches, but he did note Hoffman was one of the Mustangs and Copper King players that went to the bar afterwards (likely the late Dudley’s, on Grand Avenue) to bury the hatchet.

I can imagine Hoffman in that bar, making friends, assuring everyone he wasn’t as scary as he looked, not really caring if he was succeeding or not to keep some competitive advantage, feeding quarters in the jukebox to blast some AC/DC. I can also imagine Hoffman in those days licking his throwing hand before every pitch — it was something he did at the University of Arizona, and possibly continued to do in Billings while misplaced on the diamond. I can see that habit making it easier for one of the adults employed by the Cincinnati Reds organization to imagine Trevor Hoffman as a cat, then envision him as a human pitcher.

Let’s say you live in Billings, Montana. And let’s say Major League Baseball succeeds in destroying the Pioneer League and stealing baseball from your state. Once all three of your teams have disbanded, the nearest place for you to see a professional baseball game is in Fargo, North Dakota. That is to say, the nearest baseball game is 608 miles away.

Why isn’t MLB shutting down the Fargo-Moorhead RedHawks? I’m sure they would if they could — nothing, it seems, brings more joy to Major League Baseball than getting rid of baseball—but Fargo-Moorhead is an independent team. You know those cop movies where the hero is so frustrated because the crime wasn’t technically in his jurisdiction and he just has to watch as the FBI bungles everything, and then at the end he says, “Screw it,” and handles things on his own? MLB has daydreams like that, except instead of catching bad guys, they’re stamping out independent baseball teams and crushing the dreams of their constituent players.

Anyway, Fargo, North Dakota. That’s where you, our baseball crazy Billings resident, have to go to see a game. All you have to do is drive for 8 hours and 37 minutes. Just to illustrate how far away MLB wants baseball to be from you, in the time it would take you to drive to Fargo, you could do any of the following:

You could watch the original Star Wars trilogy, plus Rogue One: A Star Wars Story.

You could get a good night’s sleep and then take a pretty decent nap.

You could watch Casablanca, then fly from New York to London.

You could listen to the entire audiobook of Harry Potter and the Sorcerer’s Stone.

You could watch the entirety of the Star Wars prequel trilogy, with plenty of time to pause the films after every interaction between Hayden Christensen and Natalie Portman so you can run to the bathroom and barf.

You could play a hundred and seventy-two rounds of Boggle.

You could play approximately one hundred games of chess with my nephew.

You could play approximately half a game of Scrabble with my mom.

You could orbit the earth five and a half times aboard the International Space Station.

You could watch the entirety of the Star Wars sequel trilogy, then watch The Rise of Skywalker again just to try to figure out what the hell was going on there.

You could make several servings of minute rice. Or at least I think you could do that. The instructions on the box are very confusing.

You need to be logged in to comment. Login or Subscribe
Kristoffer Ericson
The Proclaimers! The song is technically titled "I'm Gonna Be (500 Miles)". I have the album (Sunshine on Leith) that song is on, and do love it.
Reply to Kristoffer