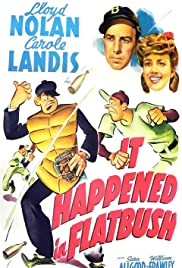 Logline: Disgraced former star Dodgers shortstop is sought out to manage the team as it struggles through another losing season; he turns the team around, and romances the team’s new heiress owner in the process.

Starring: Carole Landis as the owner of Brooklyn’s baseball club; an intelligent and talented actor, she was wrung through the studio system of the pre-war ’40s and ostracized afterward for having the temerity to write a book about her experiences in the USO. Lloyd Nolan, the washed-up player who returns to manage the team, was the exact opposite: An amenable and competent character actor, he worked every job offered to him into his ’80s.

Director: Ray McCarey, Billy Ripken to older brother and Academy Award-winning director Leo McCarey. He worked at the Hal Roach Studios doing shorts for Laurel and Hardy and the Three Stooges, but after those petered out, his feature films were largely B pictures like this one.

How Realistic is the Depiction of Baseball? Somewhat. The film rather dexterously weaves actual game footage of Ebbets Field into the clumsier, close-up shots. While the sky-backed upshots of pitchers slowly hucking pitches feels artificial, and the script compels batters to leap out of the way of the occasional lazy strike, it’s aided by the fact that we are talking 1940s baseball; it’s off, but impossible to tell how much it’s off. Former Dodgers shortstop (and, at that time, Hollywood security guard) Johnny Butler served as technical advisor.

Real-Life Baseball Cameos: None. When the project was started, 20th Century Fox had arranged for the use of the Dodgers’ namesake, but that fell through, and Dodgers owner Larry McPhail banned Leo Durocher from narrating the trailer for the film. It’s hard to see why; the movie isn’t critical of the Dodgers in really any way, so perhaps the rift was more personal than business.

Review: Clocking in at just under 80 minutes, It Happened in Flatbush isn’t so much a love letter to Brooklyn as it is a love postcard. But it does take pains to celebrate the unique foreign citizen that is the Brooklynite, even if it sometimes struggles to remember exactly what’s so unique about him.

The movie is at its best in the opening. Irish-American Sarah Allgood provides the Dodgers’ matriarch with the majesty of Margaret Dumont and the force of James Cagney; she pushes the film forward through brute strength, plowing indifferently into a men’s locker room to hunt down the one man for the job, Frank “Butterfingers” Maguire. He’s been managing in the sticks for years, and instinctively rebuffs the woman who cut him, but it’s clear that he’s been hanging on for exactly this opportunity.

Maguire travels to New York and discusses the state of the franchise with the general manager. “What about those scouts of ours?” Maguire demands as he combs through the detritus on the roster. “What have they been doing? Tell them to get out, get on the job. Dig me up a Ruth or a Gehrig.” To which the GM answers: “Is that all you want?” It’s genuinely sharp dialogue, and it points toward an excellent movie that this might have been, if it understood itself and its production budget. So many sports movies depend upon the realism of the action; for a moment, this one lives on in the realism of its management. It’s a slight glimpse of Moneyball, 70 years early: the first conflict facing Maguire is how to scrape $25,000 out of ownership to buy a new hitter.

Sadly for Maguire, Allgood’s owner dies of a heart attack, and sadly for the viewers, she’s replaced by a family trust led by Carole Landis’ beautiful, baseball-ignorant socialite. (“Does she know anything about baseball?” Maguire asks, to be rebuffed with, “Since when do we play baseball on horseback?”) Landis does her best with the little she has to work with; with one exception, the acting is really quite strong for a production of this caliber. But her character’s arrival is the signal that the movie is about to fall apart.

Baseball movies have always had this problem: They can’t just be baseball movies. They have to be more. And so they almost always end up being everything all at once; they’re comedies in the clubhouse, and dramas at home when it gets dark, and action movies when the game starts. Once in a while a movie like Bull Durham can survive being spread this thin, but here, the hour and twenty minutes simply isn’t enough time to cover all these cinematic bases. And so we’re left with a series of staged set pieces, all cheaply filmed, that have the effect of feeling more like inning breaks than a story.

Maguire systematically woos Ms. Kathryn Baker, most likely from his refreshing, anti-society Brooklynness. His scouts do end up “finding” a Gehrig, or at least a similar star, in a kid who’s been playing baseball in the bush leagues on the sly out of fear of his disapproving father. Then we rumble into the second act and, because of the demands of second acts, the good things are nearly taken away. Maguire skips a date, loses his ballclub and his star pitcher. Again, there are hints of a better movie here, a character study of the costly error that drove him out of town, but they’re mere references.

And then in the third act, the film remembers that it has sold tickets on the premise of being a baseball movie, and presents the final pennant-deciding game with the usual competent, rote elements of the sports movie. The manager trusts his gut and sends in the kid with the game on the line. The kid delivers, the team wins the pennant, the two lovers hold each other chastely in celebration. End title card goes up; everyone goes home, duly and lightly entertained.

Which is, in the end, all this movie is trying to be. The end result is a failure of a film, not in writing, not in performance, but in ambition. It wastes the talent of its actors and the opportunities of its own story. It is perfectly, amiably unmemorable. There are a few memorable scenes: perhaps the best is Maguire, explaining amidst a crowd of his new bosses the need for a new pinch hitter, and then having to work all the way backwards from what a pinch hitter is, to what a hitter is, to what baseball is. It’s legitimately charming in that way that infuriates in how it didn’t try harder.

The final message of It Happened in Flatbush, during the parts of the film when it’s trying to send a message, is that if you quit once, you’ll always quit. Ironically, the film itself quits halfway through.

This Movie’s WAR: 0.3. The light-hitting backup infielder of baseball movies, Flatbush doesn’t do anything terribly well, but it also doesn’t do anything horribly, and it can field the position. Two years later you’ll have forgotten it was ever on the team.