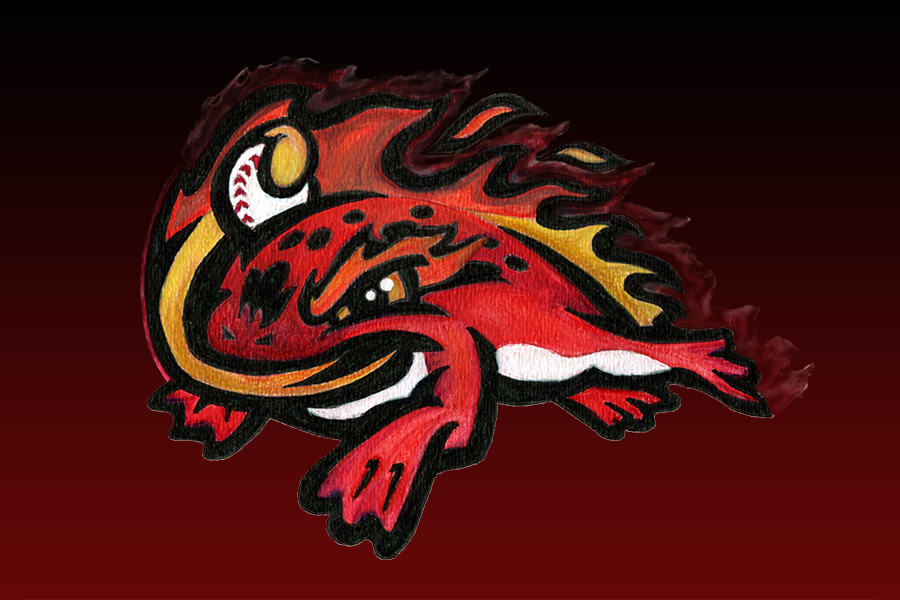 Every Tuesday and Thursday, Too Far From Town shines a light on the 42 (really 43) minor league baseball teams in danger of losing their major league baseball affiliations, effectively leaving them for dead. Today we focus on the Florida Fire Frogs, a Single-A Advanced affiliate of Atlanta’s. You could take in the previous installments here.

The worst thing you can say about the Florida Fire Frogs is that they were almost named the Sorcerers.

Actually, I take that back. The worst thing you can say about the Florida Fire Frogs is that they were almost named the Rodeo Clowns. The rodeo clown is the least horrifying of all the clowns, but that’s not exactly an achievement worth bragging about. It’s kind of like calling yourself the Tom Hanks of ax murderers. Nothing’s going to beat the rodeo clowns.

Wait, no, I take that one back too. The worst thing you can say about the Florida Fire Frogs is that they were almost named the Braves. Calling your team the Braves solves the age-old riddle: How do you make your team sound both racist and boring? Yeah, I think that’s the worst thing.

I should back up for a second and explain that Florida Fire Frogs is a new name. In 2016 Atlanta’s High-A affiliate relocated and held a public vote for the name of their new team. This is a somewhat dangerous practice. Sometimes it turns out perfectly and you end up with the Savannah Bananas. Thank you, Savannah. You have briefly restored my faith in democracy.

Sometimes it goes terribly and you end up with the Washington Wizards. I personally voted against this name when my hometown Washington Bullets, belatedly acknowledging that their name reflected a little too accurately the city they represented, rebranded. Unfortunately, the other options weren’t much better. The Washington Stallions, anyone? Who wouldn’t want their basketball team to sound like a big, oversexed horse?

The Fire Frogs, on the other hand, had some solid choices on the ballot (except for the Rodeo Clowns; I get that the area is known for the rodeo, but there is simply no excuse for clowns). The Toucans and the Dragonflies were candidates, and they’re ok, though I don’t think anyone, in their heart of hearts, actually likes dragonflies. Dragonflies just kind of float harmlessly on a summer day, and then all of a sudden one gets too close for comfort and you realize they’re freaking huge and loud and maybe you should go back inside before they start divebombing you.

Mud Kickers was also on the ballot, and the Mud Kickers sounds like a legitimately cool name—unless you look it up. If you look it up you will find, first, a song by Skid Row, the eighties’ hair metal band from New Jersey. “I ain’t the child of your disgrace/You’re mudkickin’ in my face,” is a catchy chorus, but it would make for a weird fight song. The second thing you’ll find? Well, I will leave that for you to investigate.

My larger point here is that the Florida Fire Frogs seem kind of great. When the worst thing you can say about a team is that it avoided some bad choices, they must have done a pretty good job. Even the fans nailed it.

Next, let’s consider the context. The primary logo depicts a coquí frog, the national symbol of Puerto Rico, because Osceola County boasts the country’s second largest Puerto Rican population. Naming your team the Fire Frogs to reflect your community? Yes, please. Naming your team the Sorcerers to spark corporate synergy with Disney World? Please, no.

That logo I just mentioned, is it dope? Well, it’s a frog who is:

A) About to eat a baseball.
B) Straight up ice-grilling the viewer.
C) Literally on fire.

While the team handled its move and its rebranding perfectly, that rebranding itself was an original sin so transgressive as to make the team truly unredeemable. You see, before their current incarnation, the Florida Fire Frogs—and if pains me to say this—were not called the Florida Fire Tadpoles. They were the Brevard County Manatees, and manatees flat out rule. Regardless of how well they managed the transition, ceasing to be the Manatees is the worst thing about the Florida Fire Frogs.

Wait, no, sorry. It’s still the Rodeo Clown thing. No clowns. No clowns ever.

In September 2016, after the end of their 12th season of play, the Brevard County Manatees left the only home they had ever known. They moved 53 miles away, about an hour’s drive, from USSSA Space Coast Stadium in Viera to Osceola County Stadium in Kissimmee. They started wearing new clothes. They said they would like to be known as the Fire Frogs now, and since they were adults now they felt ready to not just represent one county, but an entire state. They changed parent team affiliation, giving them an entirely new set of friends and acquaintances. They even moved again, farther away from where they grew up — 192 miles separates Space Coast Stadium and the ridiculously named CoolToday Park in North Port (Sarasota County) where the Manatees are set to play in 2020, but if you don’t want to hit any tolls it’ll take at least 209 miles.

This happens all the time in minor league baseball. And look, the Manatees never won a Florida State League championship outright, so it makes sense. Sometimes it takes a long time before you realize you’ve been given a crappy hand and you need to make something happen to see the flop. They thought it was time, so it was time.

Then a couple months ago, in December 2019, Fire Frogs co-owner David Freeman basically said, “Actually, could we move back to Brevard?”

So that is a little different, in terms of baseball. In life, it happens. You strike out on your own, the world says “Hey not so fast there Hoss,” and you find yourself back where you’re started, having changed. Joseph Campbell talked about this all the time, even when people were trying to sleep. They say you can’t go home again, because home feels different, because you are different. You took your shot. Progress and evolution is not a straight line. Sometimes it’s two steps forward, 1.99 steps back. But hey, the Fire Frogs took those two steps.

Did they embarrass themselves out there, away from home? They finished in sixth place in 2017, 2018, and 2019 in a six-team division. That wasn’t so hot. The 2017 season included four home dates against Tim Tebow, when a fair number of fans spent $50 on a Tebow VIP package which included a commemorative bottle of dirt from the batter’s box. That helped give the Fire Frogs an average of 1,082 fans a game their inaugural year. Then 600 the second, and 327 last year. If they had stayed in Kissimmee for 2020, they’d be on pace to possibly have a negative amount of spectators. And Tim Tebow probably isn’t going back to Single-A. Not great.

It hasn’t been all bad. It’s never all bad when you take a risk. Ronald Acuña Jr appeared in 28 games in a Fire Frogs uniform. In one of those Acuña blessed contests, Florida won 22-2. Jasseel De La Cruz threw a no-hitter for them once. Only four strikeouts, but it was a nine-inning no-hitter, in a 12-0 win. The Fire Frogs don’t have to massage the truth to Brevard County to pretend they’re absolutely thriving. They don’t have to claim they reunited The Beatles and revived John Kennedy, when in reality they hired a dedicated cover group and a 6’8” Australian lefty reliever who spells his first name without an ‘h’, respectively.

Unfortunately, Brevard County turned Florida’s bedroom into a home office — Space Coast Stadium is currently in the hands of the U.S. Specialty Sports Association, making the venue unavailable too often for a baseball team to call it it’s abode.

There are other venue options in the county for 2021, but of course Striker and the Fire Frogs have contraction hanging over their heads too. If the apocalypse does come and takes us away from here, wouldn’t it be nice to be home?