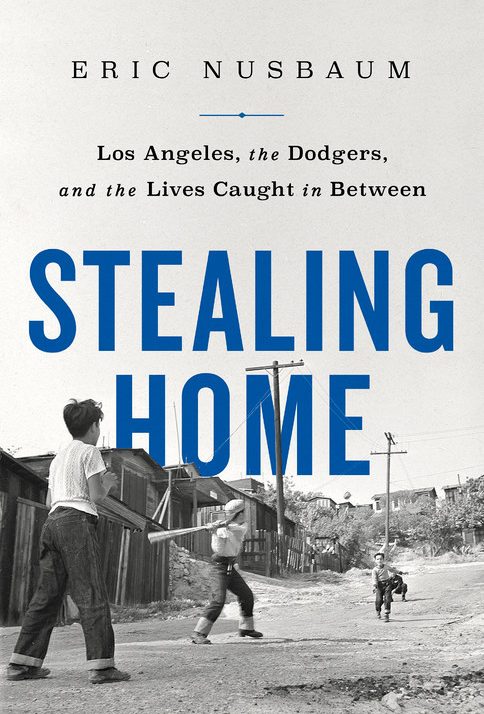 At first glance, it may seem like there isn’t a lot of baseball in the baseball book Stealing Home (Eric Nusbaum, Public Affairs Books). Its first five chapters flit between the Mexican Sierra Madre, the Siege of Veracruz, and a pair of small towns in Arizona. Duke Snider, baseball’s athletic representative for the majority of the book, arrives a quarter of the way through, primarily to serve as a mannequin for the logo on his own uniform, the then-Brooklyn Dodgers. His headshot (a number of illustrations for the book are provided by Adam Villacin) is appropriately heroic and blank. It is not his story; he has his own.

Stealing Home doesn’t feel like a baseball book because there are generally two fundamental types of baseball books. There are the sepia-toned celebratory histories, the epic sagas of Angell and Hahn that must dutifully be supplied for each new champion. And there are the One Weird Trick books, the ones that reveal the latest way that the game has disrupted its own market. Both genres are valuable and offer many fine titles. But they share one trait, that of being for the sake of the game, trained ever inward upon itself.

Baseball is, in many ways, this book’s antagonist, a symbol for the final throes of manifest destiny as it crashed against the last open spaces along the Pacific shore. The game, like its country, is a beloved and successful juggernaut, crushing everything in its chosen path. For much of the book it looms over Los Angeles like a portent; we’re treated to the slapdash PCL equivalent for a time, but other times it feels so distant to the story as to almost be forgotten. Almost. But we know that the Dodgers are coming, and where they will make their home. We also know who already lived there. The mystery is not what happened, but how we got that way.

The iconic image of the Battle of Chavez Ravine is the scowl of Abrana Aréchiga, the wiry matriarch of one of the last families fixed to its properties, insolent even as the bulldozers crashed into the house her husband had built. Nusbaum paints the exact moment of loss in the introduction before pulling all the way back to Aréchiga’s youth, her immigration to America and to the copper mines that promised a better life. The narrative of her family line has every bit the cadence of a baseball narrative: the humble roots, the hard work, the victories and setbacks.

Even if the baseball isn’t immediately apparent in the story, one can find it in the cadence: The abbreviated chapters, often only three or four pages, would feel distracting in most narratives, but here they take on the rhythm of a series of plate appearances, each featuring a different name, but all driving toward the same conclusion. It’s a credit to Nusbaum that he can weave so many threads here, not just out of artistry but out of necessity. Because while the lasting image over the arrival of baseball in Los Angeles is the eviction of Abrana Aréchiga, the truth is that the real struggle here is one of politics, and with any good political battle, an underlying ideology as well.

There isn’t a lot of baseball in Stealing Home, except for the fact that it’s all baseball. The Los Angeles Dodgers in the past future tense represent so many things to so many people, all with their own motivations. They’re the symbol of American cultural superiority, all the virtues of team-oriented rugged individualism. For the city of Los Angeles, they’re a chance to prove itself as a first-order metropolis. For business interests, they provided the opportunity to destroy a popular and unprofitable public housing movement. For Walter O’Malley, they’re a blueprint upon which he could imprint his own dreams, his quest to create the perfect franchise, onfield and off. And underneath it all, almost invisibly underneath these conflicts, baseball is the irresistible, inspiring game that creates so much affection out of nothing.

There’s one more major character in Nusbaum’s book, a man by the name of Frank Wilkinson. For the first half of the book, Wilkinson’s thread feels the loosest; a wealthy globetrotting intellectual and naive, genuine socialist, Wilkinson seems like the opposite of the game. He’s also the soul of the book, and it’s his failed vision for Chavez Ravine, and the manner by which he’s outmaneuvered and undercut by his political rivals, that serves as the central conflict. O’Malley arrives to consume the land provided to him, but the fight is already lost; the common good as middle-class entertainment, rather than lower-class assistance, has already been decided.

The subtitle to the book is “Los Angeles, the Dodgers, and the Lives Caught in Between.” This is perhaps a poor choice of words, or at least the ordering of them. The portrait Nusbaum paints of mid-century Los Angeles, from the dirt roads of Bishop, La Loma, and Palo Verde to the carnival-like PCL environment of Wrigley Field (the LA version), feels lived in and real. But the book is no more a municipal title than a baseball one; it requires no affiliation toward this specific city of Angels. The people that play its parts could exist in any city in America, and the McCarthy-tinged era is particularly (if unfortunately) resonant. As far as conflicts go, man vs. society can play in any park.

When Abrana and Manuel Aréchiga arrived in Los Angeles and pitched a tent on their remote, unwanted corner of Los Angeles, it was a rarity. All modern houses, and stadiums, are built on forgotten cemeteries. What’s special about this story is the value that we all imbue, willingly, on this cathedral to our holy sport. And one other reason: because of how it is told. Baseball books tend to trade in myth, or the destruction of that myth. Stealing Home is a story of people, and it’s the political power of their community that’s godlike, in that it sometimes favors them, and sometimes grinds them into the dust.

Baseball exists because we care about it. Because of this book, the same is true of Abrana Aréchiga and Frank Wilkinson. It’s what great writing can do.

Stealing Home is available for sale on March 24, 2020 from any number of booksellers.

You need to be logged in to comment. Login or Subscribe
newsense
"Even if the baseball isn’t immediately apparent in the story, one can find it in the cadence: The abbreviated chapters, often only three or four pages, would feel distracting in most narratives, but here they take on the rhythm of a series of plate appearances, each featuring a different name, but all driving toward the same conclusion"