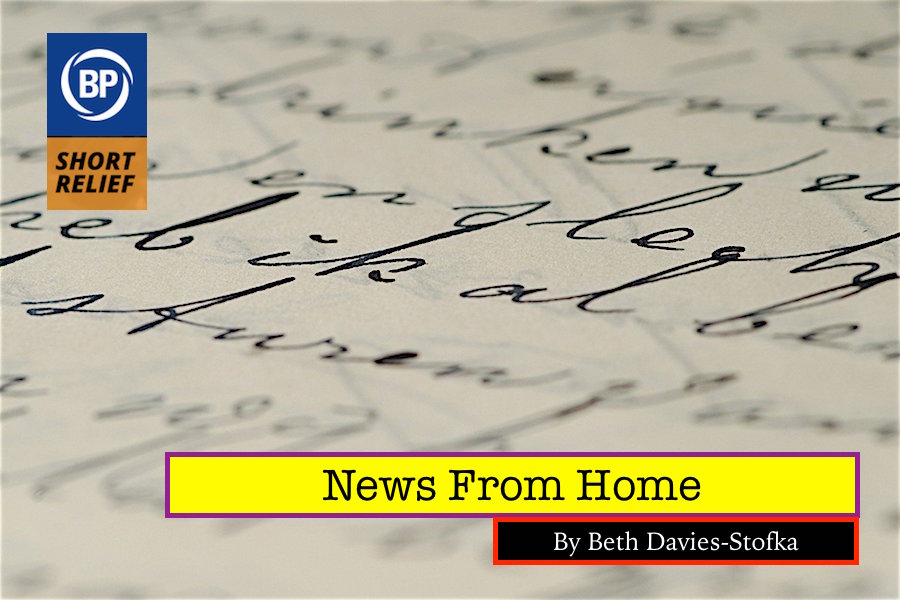 I’m sure you want to hear all the news about Sasha. My beautiful girl! It’s never easy being fifteen. She’s had a lot of heartbreak this year. It started when her old dog Henry died, just as autumn was ending. She petted him until he took his last breath, saying she didn’t want him to feel alone. How she cried, just a little girl again. No one will ever replace Henry. Tough lesson to learn.

A month or so after Henry died, she asked me to buy her a cute dress. A cute dress! Her words exactly. She wore it once, when she went to a school play with her best friend Ryan. My yoga-pants, stuck-in-her-phone girl was a girl transformed. She was taller that night. She gleamed!

Two days later though, more heartbreak. Ryan’s parents came over to say that they were moving back to the States. They left soon after so that they could be home for Christmas. Sasha lost her best mate just like that. Ryan’s the one that stood up for her when she tried out for the team, remember? The coach was in favor of it, but the boys were a bit cruel. Ryan practiced with her until she had three good pitches: a fastball, a sneaky curve, and a decent knuckleball. She wasn’t ready to make it as a starter, but the coach slotted her in as a reliever. She was elated to belong to a team. She and Ryan worked on their pitching every day, and I’ve never heard two kids laugh so much. She was almost inconsolable when he left.

Then, shortly before the end of the year, the coach moved to the Netherlands and Sasha’s school disbanded the baseball program. She was crushed, Angela. I don’t think she was sleeping. She said she missed cuddling with Henry. She wouldn’t talk to me about Ryan. She just didn’t seem to have her bearings.

I was really surprised last week when she told me she wanted a sixteenth birthday party. She gave me a list of her friends, including all the boys from her old baseball team. She asked me for a puppy, and we went to the shelter to adopt one. She picked a wriggly little mutt with lots of brown fur and he adores her.
Then, just the other day, she asked me to iron her cute dress. Come and see her soon. The little girl is nearly grown. The young woman is a delight. 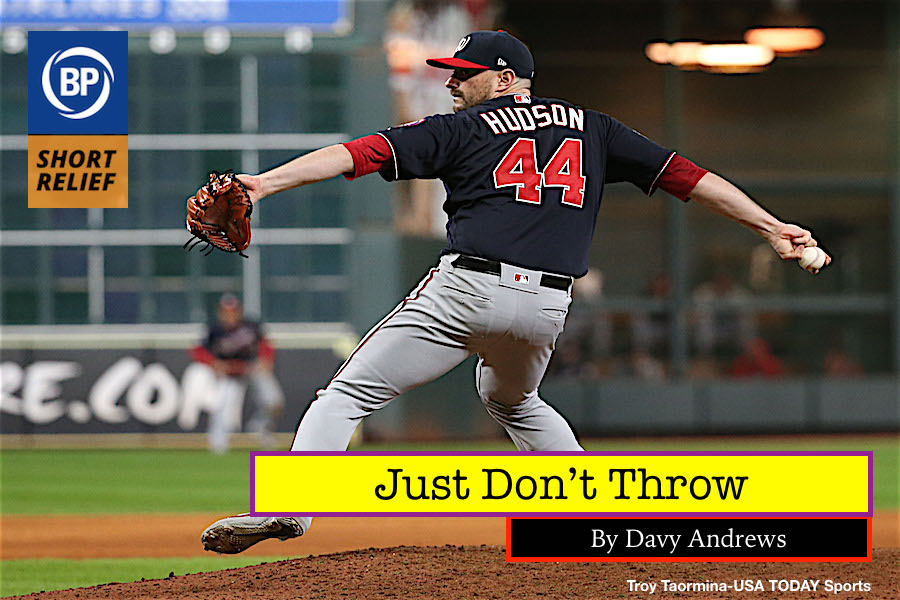 This all started with something Daniel Hudson said. The Arm, Jeff Passan’s wonderful book about pitching, chronicles Hudson’s return from back to back Tommy John surgeries. Asked about all the physical pain he’s endured, he sums up the choice perfectly: “You want to not feel anything in your elbow again? Just don’t throw.”

As I was thinking and writing about that quote, I was reminded of another that I’d read a while back: “I don’t think any of us are playing to be in the minors, but even if things don’t work out this year, I want to stay in baseball as long as I can. I went to Stanford for a reason — I’ll eventually have a career in another field — but playing baseball for a living is more enjoyable than working 70 hours a week in an office. Everybody I know in the real world has told me, ‘Keep playing baseball.’”

It’s that last part that gets me: Everybody I know in the real world.

When I tracked down the quote, I found that though the player who said it is no longer playing baseball, he took the advice to heart. He held on, from the majors back to the minors, to the Atlantic League, to independent ball, to the Mexican winter league, and finally to the real world.

At the simplest level, sports is a fight against physics. It tests how well you can resist gravity and friction while you jump, while you run, while you slide a big, weird rock down a sheet of ice toward a bunch of other big, weird rocks. I don’t really understand curling. If you bonk one of the other team’s rocks, you win? You chug a beer? You move to Winnipeg?

The real opponent, though, is your own body. How hard can you push yourself in training? How precisely can you control your movements? Can you gear up for a fastball in and still keep your weight back long enough to foul off a slider away? Can you snap off a put-away curveball once your arm is dead tired, and it requires every single ounce of focus and determination you possess? How much pain can you endure?

Those of us in the real world will never know what it’s like to be a professional ballplayer. We love to watch them improve, we love to see them achieve greatness, but the closest we’ll ever be to them, the time when can relate to them the most, is when their trajectory bends downward. We root for Bartolo Colón and Fernando Rodney to snag a minor league deal somewhere, to resist the real world for one more year. Just don’t throw is too sad a fate to wish upon anyone. 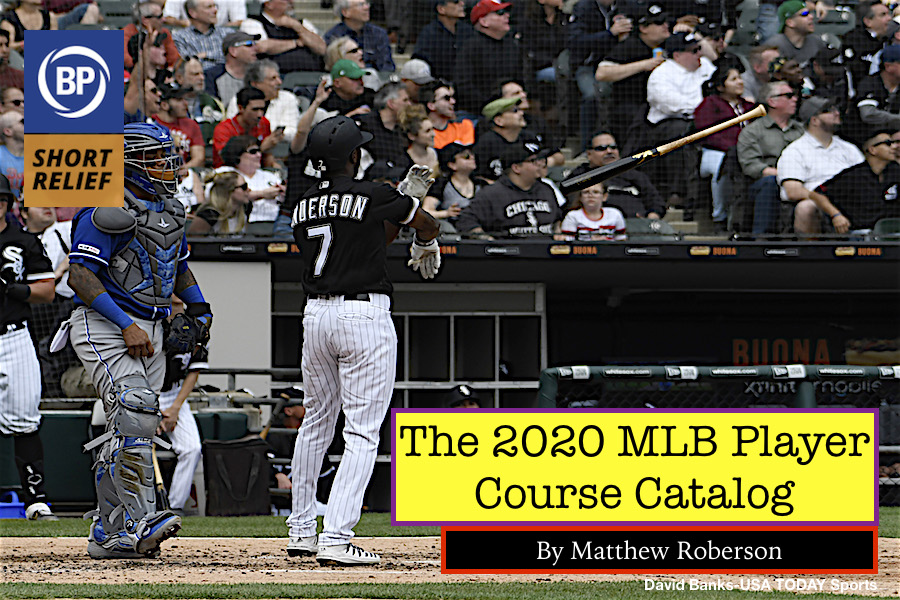 Tim Anderson is no stranger to making history. He hit a mind-bending .495 during his sophomore season at community college. By leading the American League in batting average in 2019, he and Mookie Betts became the first black American players to win the AL batting title in consecutive seasons. And when he held a bat flipping seminar at the White Sox’ annual fan event, you have to imagine it was the first of its kind.

In typical professional athlete fashion, Anderson described the mechanics of his signature, awe-inspiring move in a terse, unrelatable fashion, telling Madeline Kenney of the Chicago Sun-Times, “You just have to do it.”

Ah, yes, thanks Tim. I should simply possess innate skills at a young age, develop those skills through years of hard work in order to reach the height of my profession, then be better at everyone else there too, all the while making people upset because I celebrate how much better I am with unrelenting aplomb. Let me run that by my editors before trying to publish my next piece: “Shame on a Blogger Who Try to Run Game on a Blogger”.

While Anderson’s instructive seminar deserves adoration, I’m here to propose some alternative classes for other baseball players to teach.

Buster Posey: How to Find the Career That Fits Your Name

The way I see it, if you’re a grown man choosing to go by Buster, you only have a couple of realistic employment options. One is character actor, one is high school coach in a small Midwestern town, one is organized crime boss, and the other is baseball player. Posey seems to have made the right decision based off his skill set, and if he ever went to the Astros, he could check off both of the final two things at the same time!

Mike Trout: How to be Rich and Famous Without Anyone Knowing Who You Are

Mike Trout is exactly the kind of famous I would hope to be. Insanely rich, oozing with talent, revered by people in your industry, and virtually unrecognizable to the general public. I like to imagine Trout, Chad Hugo, and Hans Zimmer meeting up every Saturday morning at purposefully busy coffee shops and counting all the people who give them the “I feel like I’m supposed to know who you are but I can’t quite place it” look.

Ronald Acuña Jr. and Juan Soto: How to Piss Off Exactly the Right People

Similar to Anderson, the guest lecturer for this class, both Acuña and Soto have the preternatural gift of infuriating people you don’t want on your side anyway. Some of it is playing a game that’s religiously devoted to the past with a youthful exuberance, some of it is having the audacity to express themselves while also having black and brown skin. I want to learn the secret to striking that chord in people before they even have the chance to unleash decades upon decades of bad opinions. Speaking of which…

John Smoltz: How to Hate Everything

This one is just John Smoltz calling the police on any person under 30?

You need to be logged in to comment. Login or Subscribe
Patrick
I will miss Short Relief. Would love to see a Best Of anthology book put together at some point.
Reply to Patrick
Patrick Dubuque
This is quite possible!
Reply to Patrick