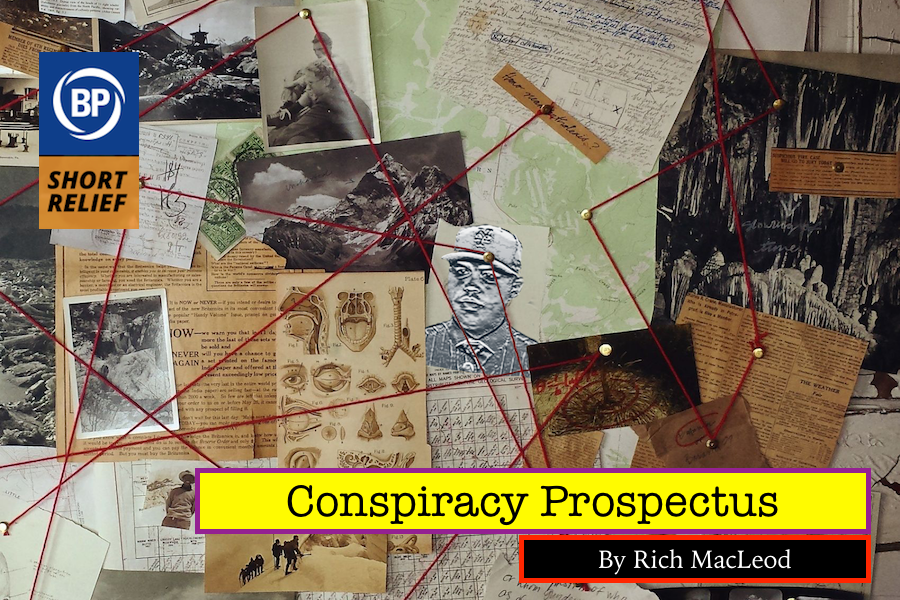 Picture, if you will, a cordoned off room that has not seen the touch of light for days, maybe even weeks. A room that is lined with loose papers that stretch far beyond the eye can see. A collection of madness being held together by push pins and as much red yarn as was readily available for purchase at the nearest supply store. There is a man in this room – eyes bloodshot, his face burdened with scruff that has begun to gray. He realizes this scene is crazy, but he also knows that he may be onto something.

This is not just a soliloquy, because this man is real. This man is me.

Now, okay, perhaps there is no physical room strewn with newspaper clippings or photos of suspects’ faces as I just described, but that doesn’t mean that it does not exist. Because when it comes to Carlos Beltrán vs. the Mets vs. Major League Baseball vs. my own psyche, this setting is a manifestation of my brain… My sick, sick brain.

Every time I try to convince myself that no, this is just the standard fallout that accompanies a scandal that spiraled out of control akin to a carousel in Hell, I just keep going back full conspiracy theory mode here. And while I’m not quite sure where exactly I fit on the scale, I tend to believe that I’m somewhere in between Charlie Kelly and A Beautiful Mind level of crazy.

Stick with me here, if only for a moment, as I attempt to take you through my metaphysical string of consciousness…
↓
Rob Manfred and MLB are mad, and I mean really mad about this scandal. They suspend A.J. Hinch and Jeff Luhnow for a year, and a suspension is coming for Alex Cora. All three get fired.
↓
Carlos Beltrán is the only perpetrator left that finds himself in a position of authority and power. The league can’t have that, but they also can’t punish him because he was a player at the time, right? If they go after Beltrán they have to go after every other player involved and if they do that, they’re opening up Pandora’s box and starting an all-out war with the Players Association.
↓
No, no, no they’re too smart to do that. So they do the next best thing: Leave Beltrán’s name in the report. They may not be able to take away his job, but if they leave him as the only player named in the official report, the outside pressure will build and build and build until BOOM, the Mets have no other choice. And MLB gets exactly what they wanted.

Alright, so it’s no chemtrail or MKUltra type revelation I’m making here but maybe I’m not so crazy. Maybe some conspiracies are more than just theories. Maybe my metaphorical newspaper clippings and this actual article weren’t the ramblings of a mad man but just the ramblings of someone who has too much time on their hands. Is it really all that improbable that a multi-billion dollar industry with an axe to grind and limitless lawyers at their disposal found the one loophole that would get them everything they wanted while avoiding an MLBPA doomsday scenario? Stranger things, my friends… Stranger things… 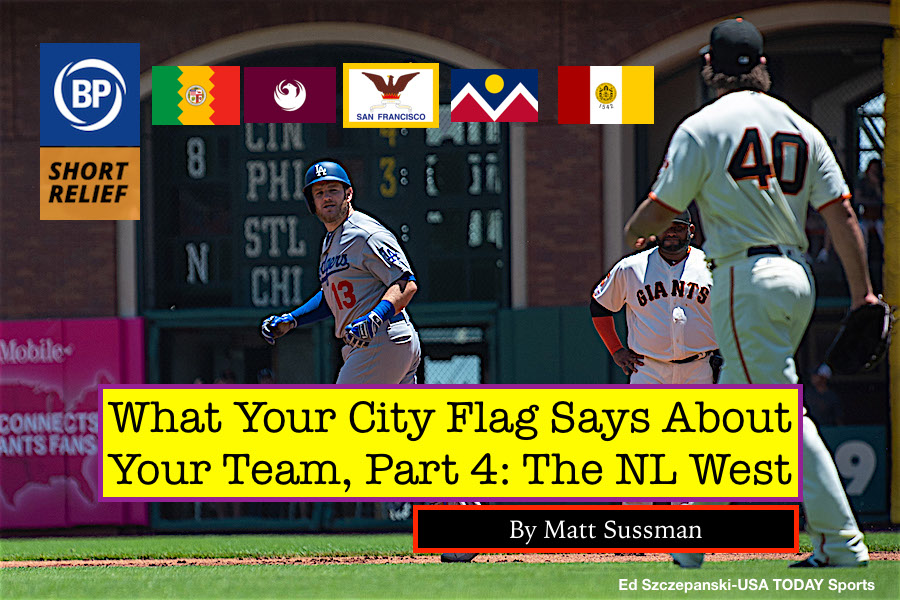 It’s time to go west, young man, and look at the city flags of the teams in the NL West, which include the Dodgers and we’ll Google the other four. 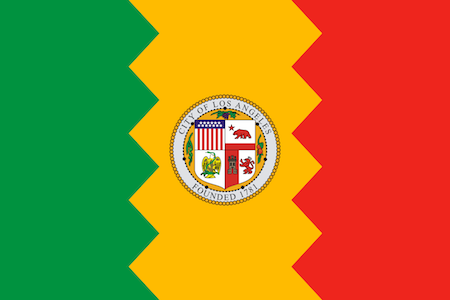 Playoffs would be easy if your colors were like my flag: red, gold and green. And this is design 101: don’t use zigzags unless they serve a direct purpose. In this case, the zigzags are meant to not make this flag look like they’re a sovereign nation. No serious country would be this festive, definitely not one with Fernandomania, Mannywood and Dick Mountain. And I’d rather not comment on seals because they’re meant to be busy, but there are so many motifs in there, yet not a single one can get a big out in the seventh. 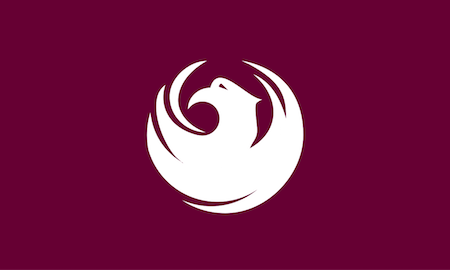 This simplistic maroon and white piece is in direct contrast with the team’s uniforms, who used the entire Crayola box. Maybe it’s just me, but the phoenix appears to be dying from the heat, not rising from it. Then again that’s just what they do in Arizona; constantly dying from fire and then being reborn from it, only rarely perishing from a Randy Johnson fastball. This is much better than their old one, which was taken the cover from the classic children’s book Beaky The Bird Keeps Exploding. 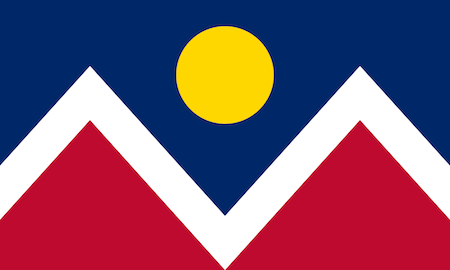 This was most certainly the alternate logo for the Rockies from 1995-1997 and you can’t un-Mandela Effect this fact from me. You can close your eyes and picture Curt Leskanic traipsing out from the dugout with this big ol’ pattern draped cross the uniform. It’s either that or a regional chain of motels only accessible by snowmobile. 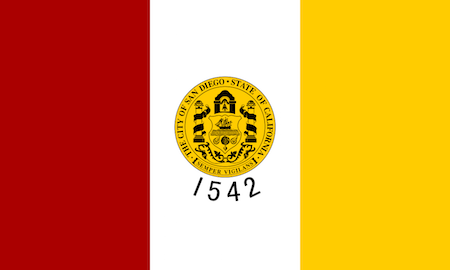 So much for years of incorporation; this flag flaunts the first year a European stepped into their vicinity. In the year 1542, Sebastián Vizcaíno sailed his flagship San Diego into the harbor, named the whole thing after his boat, and immediately jinxed his own no-hitter in progress. The flag is also a political statement as it pertains to ballpark food: mustard is fascist, ketchup is Marxist. 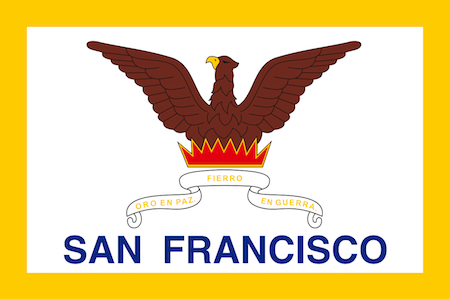 When you’re a very extensively but poorly drawn bird, you can legally nest in any vacant crown you find, because the monarchy does not belong here. That and have you seen what they’re charging for crowns to rent downtown?

That bird is supposed to be a phoenix, by the way, which makes it the second best phoenix on a flag in the division. There must have been something captivating about this particular mythical bird in the Western US at the turn of the century. I’m just picturing birds continually dying in the fields with the settlers hoping they get back up, but their window has long shut and should just be glad the birds lived long enough to win three championships in five years. 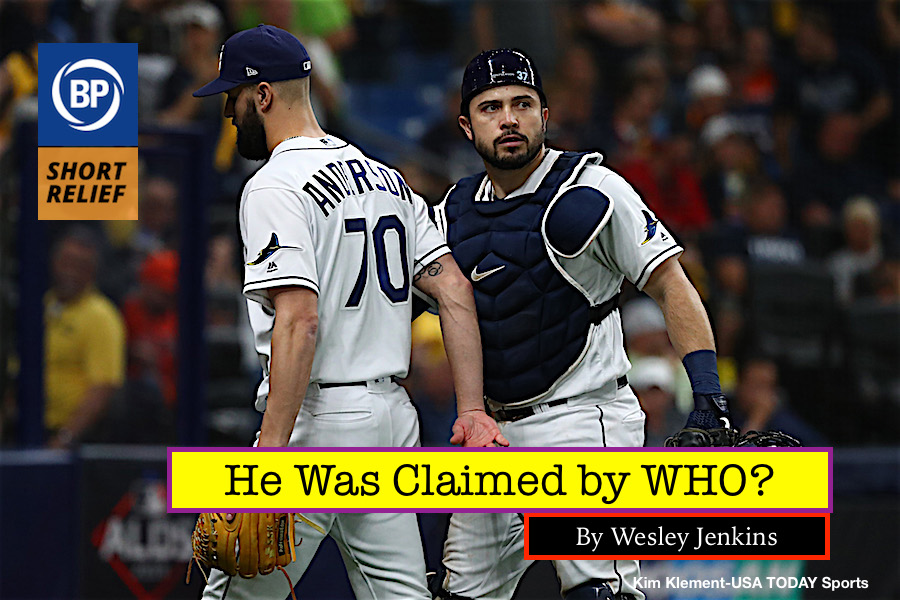 Dec. 1, MLBTradeRumors: The Rays have acquired outfielder/first baseman Brian O’Grady from the Reds, per club announcements. The Cincinnati organization will receive a player to be named and cash in the swap.

SCENE: GM (Daniel Craig with Knives Out accent) sits on desk meditating, keeps crossing and uncrossing legs because his left hamstring is tight after jogging with the players that morning trying to prove he’s “still got it.” ANALYST (Adam Driver) stares into laptop, analyzing something presumably. Twitter notification ding rings.

ANALYST: Hey boss, just wanted to, uh, let you know that guy we DFA’d was snagged.

GM: Okay but which one?

ANALYST: It was, uh, it was the Rays.

GM uncrosses his legs to let them dangle off the side of the desk. ANALYST shifts his weight and turns his attention back to the laptop, hoping the conversation ends.

GM: Used to be the Devil Rays? Those Rays?

GM stands and begins pacing in front of window. The field, visible behind him, has been dug up to put in new sod and a state-of-the-art drainage system.

GM: So you’re telling me the Rays, the cheapo Rays, picked up someone who strikes out like a guy who says he’s 5’5”on Tinder?

GM: The one who couldn’t take a walk even if the pitcher would rather play catch with the third-base coach?

ANALYST: The very one.

GM: The guy who runs like an unplugged refrigerator, plays the field like a bettor against Tiger in his prime, and hits for power like, I don’t know…

GM gestures at nothing in particular, clearly having lost his train of thought. Analyst attempts to interject but is waved away. Finally, GM comes up with…

ANALYST: You got it.

GM: Well this still doesn’t mean anything. Maybe he flames out there too! But still, the Rays… I wouldn’t mind if he was picked up by say, the Mets you know?

GM sits back down on the desk, crossing, uncrossing, and re-crossing his legs. Analyst has turned his attention back to the laptop.

GM: But the Rays, hmm… do you know why they want him?

GM: So we goofed. We DFA’d the wrong guy.

ANALYST: Well, you won’t like it but…there is a way.

ANALYST (to himself): If the Rays can make that guy a pitcher, we can make him a second baseman. I’m sure of it.

Moustakas will play second base for #Reds. Also on it: @JeffPassan. https://t.co/ZclKczZaUb