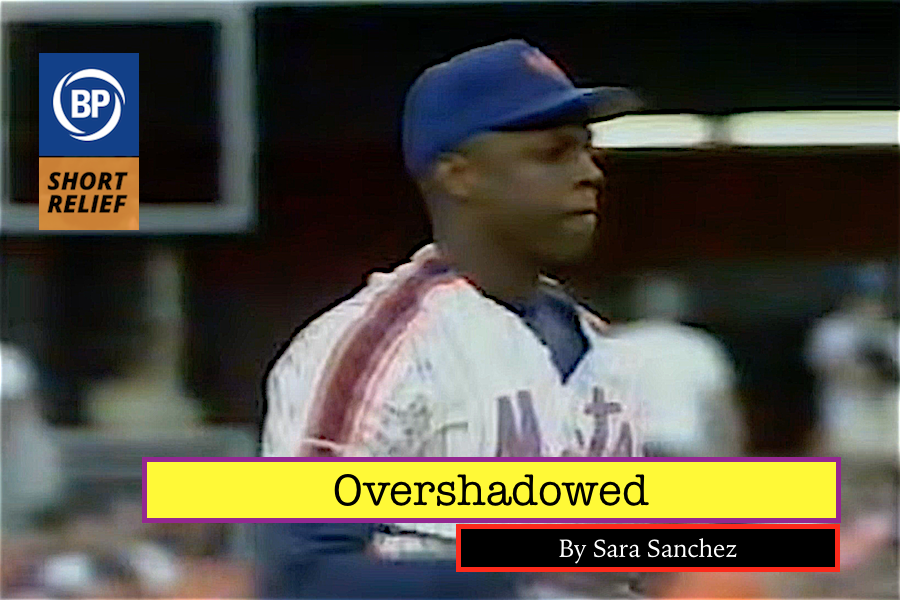 Yesterday morning I was pretty stunned reading Daniel Engbar’s cover story for Slate. His deep dive into the team culture and scandals of the late 1980s early 90s Mets hit me in the gut on multiple levels. I remembered those teams vividly, and while I was a Cubs fan I wondered how I had missed so much pain and dysfunction simmering just under the surface of my favorite sport. Engbar’s piece detailed a team that was as talented as they were prone to appalling situations. I was familiar with some of it, the drug use and parties stood out — but the multiple allegations of sexual assault and rape by different women over years was as stunning as it was vaguely familiar. Engbar built his story around one of those accusations, by a woman known as Cindy Powell:

Then, as now, there was a backlash: fear that men’s reputations could be too easily destroyed by idle claims of sex gone bad, angst about the spread of “victim culture,” and worries over the “polarizing discourse of political correctness.” Powell’s allegations against Gooden, Coleman, and Boston, coming when they did, got caught up in this broader storyline. And, like the movement itself, her case would founder.

I was trying to wrap my head around how to share Engbar’s piece revealing a story that got lost 30 years ago in a sea of sports celebrity, rape culture and 1990s media coverage of sexual assault when another scandal interrupted my thought process.

And look, I get it. As baseball scandals go few things in recent memory compare to Monday’s news specifying the Astros’ penalties for their sign stealing operation during their 2017 World Series Championship season. Ken Rosenthal and Evan Drellich broke the news in The Athletic right around lunch time that:

Whatever capacity baseball Twitter had to deal with a 30 year old scandal involving the Mets was put on hold by questions like: Was the Astros’ punishment enough? Was it too much? What type of punishment would Alex Cora receive when the Red Sox investigation was completed?

By two o’clock Astros owner Jim Crane had gone a step further than MLB, firing both Luhnow and Hinch. This resulted in another round of questions in the Twitterverse as “Astros” began trending alongside “Pete Rose” and “Black Sox.”

Astrosgate took over everything on a day that I wish more people had had time to reflect on Cindy Powell’s story, the way the media and police dealt with it almost 30 years ago and the way Daniel Engbar tried to bring baseball fans to terms with it now.

I’m not surprised some scandals overshadow others, but it seems cruelly ironic that instead of spending Monday revisiting a scandal that has been buried for over 30 years, Cindy Powell’s allegations were overshadowed again. 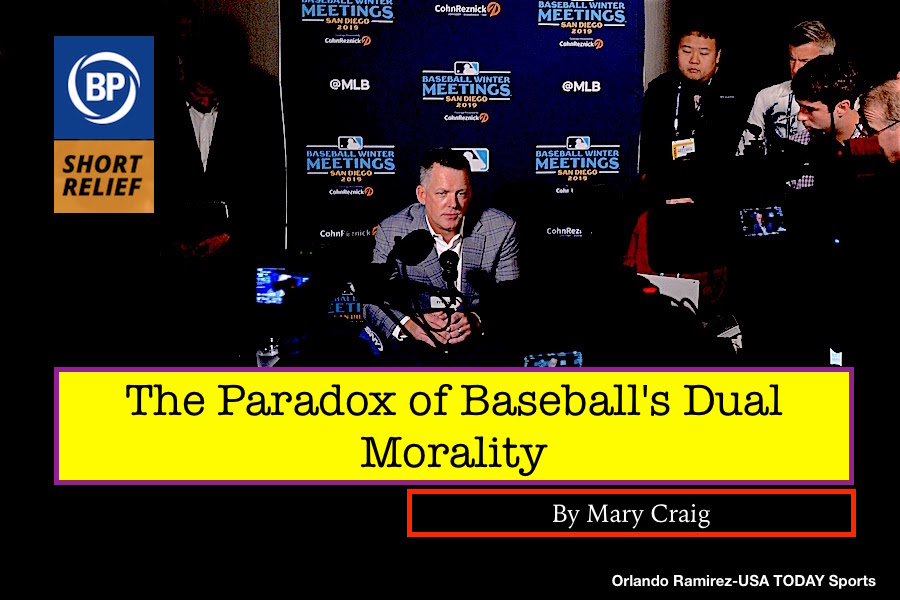 For the entirety of its existence, professional baseball has attempted to craft an image of integrity. It set out to make itself distinct from the immorality of things such as horse racing; it banned gambling and drinking at ballparks in the 1880s, and established itself as an inculcator of virtue. These measures helped baseball become a unique space within American society, extending this supposed morality into the public while being shielded from reciprocal moralizing.

In the late 1860s, several men who wished to belong to the WASP elites in Philadelphia began the process of commercializing and professionalizing the sport. They created the first professional team, the Philadelphia Athletics. By 1870, men with similar ambitions in other cities assembled their own professional teams, leading to the first professional league in 1876, The National League of Professional Base Ball Clubs. This amalgamation of teams led to greater owner control over players and the sport as a whole, though it was done under the guise of bringing a wholesome game to the American people at great financial costs to the owners. The creation of this league also gave the owners the power to create monopolies over professional baseball in each city, extending their control over the players. Indeed, any player who tried to “jump” to another team was officially blacklisted, and any team that signed such a player was removed from the league. They created the image of the baseball player as being separate from and contrary to the general working class in order to justify paying their players below minimum wage, claiming it to be a public-spirited policy.

This dual identity of baseball as carrying out a moralizing, democratic function while belonging purely to the elites in society has defined the sport for the majority of its existence. While AG Spalding toured the world with his team in 1888 and 1889, hoping to bring the democratizing influences of the sport to countries like Japan and Egypt, owners of teams at home began to strip players of their rights. They instituted a reserve clause, allowing each team to “reserve” 14 players on its roster for the following season, essentially preventing any form of free agency. Again, the owners asserted that the reserve clause fulfilled democratic goals of honesty, fair play, and accountability. The players, however, argued that the reserve clause was a fundamental violation of their rights, echoing arguments made by slaves in the lead up to the Civil War in stating that with the reserve clause, “the player has become a mere chattel” to the owners.

Although the reserve clause no longer exists, this fundamentally incompatible moral dualism remains. As reports of the Astros’ penalties were announced yesterday, there was much speculation about their effect on professional baseball’s image of integrity, an image that is seemingly unblemished by instances of domestic violence or the human trafficking of the Braves and the Dodgers. For professional baseball, “integrity” adheres to a narrow application specific only to on-field activities. It seems that the dual morality within baseball has collapsed into a single moral principle. The restrictiveness of this understanding of “integrity” telegraphs the message to its fans that all other indiscretions can be overlooked. The principles behind banning drinking and gambling for players and fans alike has shown its other side: what is acceptable for those in professional baseball is acceptable for fans. The only question is how long Major League Baseball can pretend its message is otherwise. 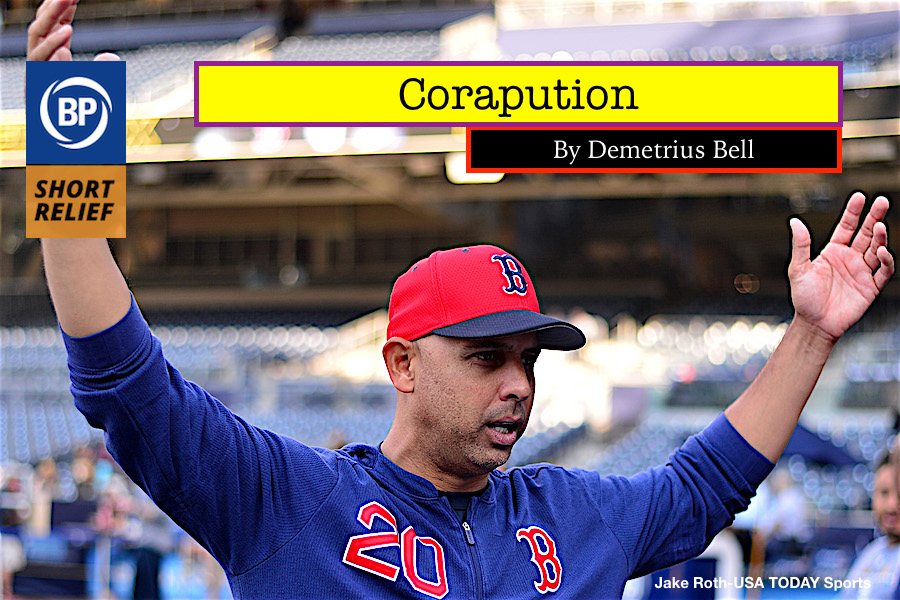 In the wake of MLB sending both Jeff Luhnow and A.J. Hinch to the shadow realm for a year and the Astros then sending those two men to the unemployment realm, there is another man who is probably watching all of this unfold and just waiting for what appears to be an inevitable exile into the former, if not both the former and latter, realms. Alex Cora may have been spared on Monday, but he may end up wishing that he joined his former colleagues in receiving their punishment. He is going to be punished, and it’s also going to be worse than what Luhnow and Hinch got.

MLB’s investigation revealed that Cora was one of the “masterminds” behind Houston’s “banging scheme”. Cora being the skipper of the Red Sox, who are currently under investigation for a sign stealing scandal of their own? The numbers don’t lie, and they currently spell out “disaster” for the manager of the 2018 World Series champions.

If Monday’s sanctions are any indication, this could mean the end for Alex Cora as a manager. While Luhnow and Hinch have been suspended for a year, it’s hard to envision seeing either of them returning to the game outside of a consultant or advisory role, where they can claim they aren’t really getting involved with the nuts and bolts of everyday baseball operations. I just can’t see any team being willing to take on a maelstrom of bad PR for bringing on two men who have become the faces of the Astros cheating scandal.

Cora will now be implicated in two major cheating scandals for two teams who both won a World Series. It’s an awful look, and it’s something I don’t think he’d be able to recover from, from professionally. Maybe a team out there who wants to copy Houston’s blueprint at all costs would “pull a Luhnow” and exploit a market inefficiency by bringing on Cora (or Hinch) as a manager, but I’d like to think teams would realize it’s not worth the self-inflicted headache.

Either way, all three of these people can still find some solace in the fact that even though their careers may have received a permanent tarnish, they’re still going to go down in history as World Series champions. They essentially traded their reputations for baseball glory. The flags will fly forever, but those flags are currently covered in grease, tar, egg yolks, egg whites, lint, construction paper, and soda cans.

You need to be logged in to comment. Login or Subscribe
Jim Proulx
I read the Slate cover story. Everything about it was pretty disgusting. From the Philly police Sex Crimes Unit that referred to their office as the "Lying Bitches Unit" to the other Mets players who are still going to be on TV talking about the Mets (Darling) and the Yankees (Cone) to the beloved Roger Angell talking about how these poor unfortunate players were "...looked upon... as sexual animals and fair game" in a book where he described the "groupie" culture as though it were not young people hooking up but rather young women looking to take advantage of athletes in order to scam them out of money. Those poor poor athletes who would often expose themselves to the flight attendants for fun, as men do.