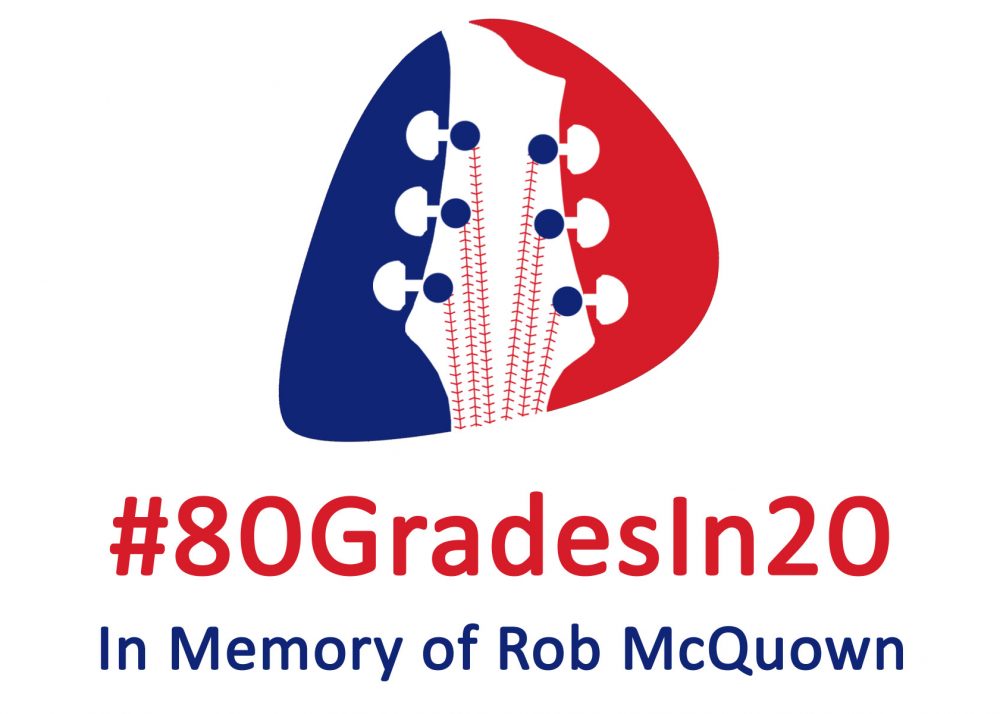 It’s been nearly six months since Rob McQuown passed away suddenly during the All-Star Break. Rob was many things: brilliant, supportive, grouchy, relatable, and full of time for his friends and co-workers. I was lucky enough to be both, and I miss him tremendously both personally and professionally.

Our conversations happened daily and spread across countless topics. Most were baseball (and Scoresheet in particular—where we co-owned a couple of teams together) or about the directions we should go in at Baseball Prospectus, but they often veered into various areas of pop culture and, in particular, music.

In every iteration of BP Slack we’ve had, there has been a #music channel and aside from the way-over-my-head conversations about music theory that would transpire between extremely talented staffers, Rob was there to pop in videos and links to things he loved and wanted to share. That was Rob to a T. Our tastes didn’t overlap a ton, but it would never stop me from clicking on what he’d send me.

Rob was personally invested in us all, somehow. We never really knew how he had the time to do that and get as much work done as he did. When I had a personal tragedy earlier in 2019, Rob would check in on me more than anyone else just to see how I was doing. When he passed, we all lost one of our biggest supporters.

To help remember my friend, and friend to us all at Baseball Prospectus, I embarked on a project to share some things that I love with the world just like Rob would—and fittingly, it’s music related.

I have loved music for as long as I can remember. I grew up on MTV (when it actually played music videos); watching and documenting years of Top 20 Video Countdowns so I could try and predict the next week’s version. I learned how to play guitar and drums in middle school, and played in bands for more than 15 years (including That Fleeting World, of Flags Fly Forever theme song “fame”). It’s still the thing I turn to when I need to breathe or escape or just get psyched.

Over the last few months I’ve been curating a list of songs that I think are basically perfect. Ones that are worthy of true 80 grades, in the scouting sense. I’ve somehow narrowed that list down to 366 (thank you, leap year!) and am going to put up one a day on social media and at BP for all of 2020.

Now, in true Rob (and baseball) fashion, there are rules. Everyone has favorite bands and albums, and I’m no exception. So here are an arbitrary set of principles I adhered to when curating this list:

That’s it. No more rules.

So what can you expect on the year-long playlist that will follow? It’ll be relatively genre narrow. I don’t listen to much country or rap or hip-hop or dance, so don’t expect to see much there. I first started listening to music regularly when pop metal was king in the late 80s, but I really grew up on grunge and the early stages of power pop in the early 90s, which bled into a mid-to-late 90s classic rock phase (we all go through it at some point). In college, I started to explore more independent music but I never really veered from the pop elements that drew me in at the start. That usually drew me closer to Britpop than the more folky American indie music of the era. I played guitar with no shortage of distortion. I played drums loudly and proudly. I was drawn in by melodies, and geeked out over harmonies and clever backing vocals. I have a thing for well-placed brass.

The fun thing about music is that it’s deeply personal and unique. Everyone has different tastes and preferences, and I’m no different. This isn’t a playlist meant to be contrarian or show off some ideal taste in music. I mean, for god’s sake I have “Stairway To Heaven”, a litany of #1 Billboard hits on the list (spoiler alert) and a ton of other songs that were vastly popular when they came out. The three bands that have the most songs are ones that you’d literally have to be living under a rock not to have heard of.

The list is also not meant to be comprehensive. There’s an insane amount of good music out there and when I was the music director at my college’s radio station, I couldn’t get enough. I’d listen to everything that came in the mail (yes that’s how radio stations used to work), but I only found so much at WLVR and beyond. I’ve been to around 350 concerts in my life and played nearly 100 shows. And even within my own musical ecosystem, this playlist would likely look different if I made it next month or next year.

Music has always been a huge part of my existence, and I want to share this piece of me with all of you in order to spark some fun conversation and maybe introduce a few of you to something you might like. Conversely, I am hopeful it may introduce me to more stuff I would like through that engagement. There’s something soulful about making a mixtape for someone you care about, and as Rob cared about everyone, this audience and format feels appropriate.

So starting on January 1, I’m going to be putting out a song per day in alphabetical order by title on my Twitter feed (@BretSayreBP) and on this page at BP with an #80gradesin20 hashtag (I’m not insane enough to string hundreds of tweets together). But as a sneak peek of what’s to come, I’ll also be rolling out a significant Honorable Mention section beforehand. I put together a list of 55 songs that just missed the cut either because they got edged out by other songs or because they would have broken my arbitrary rules. The list is that exact length because Rob would have turned 55 this year. I’ll be rolling out the just-missed group today, with my top five covers coming tomorrow.

That’s my story and my mission. Follow along if you like and ignore it if you don’t, but I’ve had a blast putting this thing together. Time to channel my inner Rob. Miss you, buddy.

You need to be logged in to comment. Login or Subscribe
john johnson
Thank you, Brett, for sharing this. I look forward to the series. Maybe as a sidebar someone during the year can work on a list of best baseball related pop songs through the decades. Rhino issued two volume of Baseball's Greatest Hits but the most recent was in 1990 and an update is overdue.
Reply to john
Joseph Luchok
Interesting how baseball and music seem to go together. I do morning links for Pittsburgh Pirates blog and have a song on top every day. Look forward tio seeing what you come up with.
Reply to Joseph
Andy Cochrane
Looking forward to this a lot.
Reply to Andy