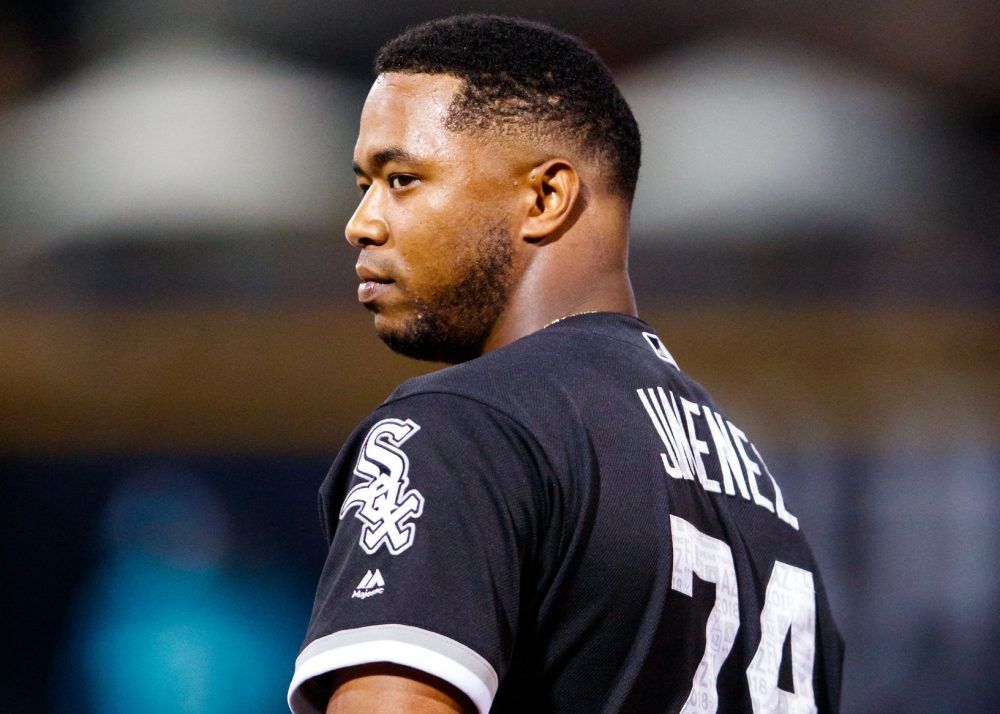 The Chicago White Sox signed OF Eloy Jiménez to a six-year, $43 million contract with team options that could take the total value to eight years and $75 million. [3/20]

This is a trivial deal to “analyze,” which one supposes is the purpose of this long-standing Baseball Prospectus feature. The White Sox signed their top prospect to a contract that covers all six years of their collectively bargained major-league control. There are two free agent years tacked on with an option/buyout structure. At the time of writing, we don’t have a breakdown of yearly salaries, but it seems unlikely that Jiménez would have beaten his now guaranteed arbitration-year payouts—likely around $40 million—unless he’s a star outfielder.

Of course, he may very well be a star outfielder.

Jiménez was sent to minor-league camp last week to avoid any risk of a pulled hammy on the major-league side that might allow him to accrue service time on the injured list, or if you believe the line oft-repeated in various snowbird cities every March, to “work on his defense.” Jiménez will likely now break camp with the White Sox as an Opening Day starting outfielder. He also gets … well, at least $43 million. It’s the most money ever given to a player with no major-league service time. That’s a nice fun fact for his agents to include in their marketing materials, but it’s functionally irrelevant, since you can count the number of these types of deals on one hand.

It is of course more money than I, and the vast majority of BP’s readership, will see in our lifetimes. It gives Jiménez financial security, and the White Sox an opportunity to accrue a whole lot of surplus value. And he woke up today the same baseball player he was last week. Jiménez is an MLB-ready elite prospect who could hit .280 with 30 bombs as soon as this season. This was probably also true last July, but reader, don’t dwell on it. You should just be excited to see him on the South Side, and now we can all put any previous unpleasantness in the past. Once the games start, all of this becomes mere background noise, quickly dissipating off into the middle distance.

I could easily pad this out to 500 or 600 words now. Give you some more background on Jiménez as a prospect, maybe discuss how he fits into the White Sox’s plans as they attempt to “cycle up” into contention in a winnable division. I’m going to take a different tact.

I don’t remember how I found Baseball Prospectus for the first time. The most plausible scenario in my mind involves someone posting a link to PECOTA projections in the baseball discussion section of a pro wrestling message board I frequented in the mid-2000s. Probably to complain about them being too low on their favorite team. Wild, I know. I was a quick convert and spent days scouring the old courier font player pages. I learned the differences between WARP1, WARP2, and WARP3. Read Prospectus Daily as my millennial morning newspaper. I’d like to think Christina Kahrl would appreciate my use of a Foucault quote in the TA title.

And there’s no zealot like the convert. I bought Baseball Between the Numbers and argued about bunting at the dinner table, in airport lobbies, at strangers’ weddings. That era of Baseball Prospectus would have seen this deal as an unabashed good thing, a smart baseball deal made possible by applying the correct screws. A decade later, I just feel uncomfortable.

This is my ninth season writing about prospects, and it’s exhausting to conjure up 1,000 words of tut-tutting every time something like this happens. Uncomfortable stuff happens a lot. We move on quickly to the next thing, or more often, the next thing moves upon us. You want to know who the next Eloy Jiménez is now, anyway. We don’t want to stop to think about his journey, and all the things that happened along the way. It might be instructive for that next guy, though.

Jiménez started out as a kid playing baseball in the Dominican Republic. He was identified as one of the top Dominican prospects in the 2013-2014 class by the time he was 14. He had the misfortune to be in first class of J2 signings under a new rules package driven by White Sox owner Jerry Reinsdorf that successfully limited bonus expenditures to top international amateur players. He was subject to all the exploitation of Latin-American children that casually goes on in that market, those little things that we silently assent to every time we hear about a 14-year-old “agreeing to terms” years early.

Jiménez got a check for $2.8 million from the Cubs and almost failed immediately. The Cubs sent him stateside for his pro debut, to the Arizona Summer League. We view those assignments as positive, a sign that the organization believes in the player. We don’t comment on the human toll of sending a kid from a different culture to Mesa, Arizona with a lacking support system and seeing if he sinks or swims. Jiménez survived the social Darwinism, but just barely so: he hit an empty .227 and almost quit baseball along the way.

We rarely talk about the kids who don’t make it out of the low minors, and we rarely talk about fixing that system. We don’t talk enough about how to improve the support system or day-to-day conditions to actually develop these teenagers into high-performance athletes. The fixes aren’t particularly complex and are trivially expensive within the larger economic ecosystem of the sport. But a lot of those decision-makers had to ride the bus and bunk five to an efficiency apartment, so Jiménez’s generation will too.

Over the course of the next few years, Jiménez settled in with the Cubs and became one of baseball’s top prospects. In July 2017, we ranked him as the eighth-best prospect in baseball. A week later, the only organization he’d ever known sent him packing. I wrote that Transaction Analysis too. It wasn’t centered on the impact this might have on Eloy Jiménez the 20-year-old person, or the three other young men sent along with him. I didn’t point out how unfair it was that he could just get called into the manager’s office one day and be told that a new group of people—led by the same Jerry Reinsdorf who has been trying to drive down labor costs in baseball and other sports since years before Jiménez was even born—had control of the next 10 years of his life. It was, of course, about whether Jiménez was too much or too little for the Cubs to give up to get a cheaply-signed José Quintana.

Jiménez excelled even more once traded to the White Sox, and in a baseball league based on merit, would’ve made the majors last summer. Yet, as discussed earlier, if he had not signed this contract, he’d have opened the 2019 season back in Charlotte to “work on his defense.” Everyone involved knows how much of a sham that is. Jiménez knows, his teammates know, other players know, everyone in the White Sox front office knows, everyone in the league office knows, and everyone at Baseball Prospectus knows. But we’re all forced to play along because the 2017-2021 Basic Agreement is ambiguous on whether a team can send a player down for business reasons and how the union would go about contesting that, and the Major League Baseball Players Association has as of yet been unable to convince jointly appointed neutral system arbitrator Mark Irvings to step in.

Perhaps Jiménez would have been called up in three weeks no matter what, and perhaps the White Sox will send him down for a short refresher course on something or another to maintain the narrative (and also maintain control over his 2025 rights if he would have more surplus value in his final arb-eligible year than he would on the first option year of his new deal). Yet we’ve been casually assuming that this would’ve been a short detour, when there was functionally nothing keeping the White Sox from holding him back until after the Super-Two date passed or even until 2020, other than perhaps a sense of discomfiture sorely lacking in baseball front offices and executive suites nowadays.

And in the interim there was a chance, albeit remote, that Jiménez dives into the stands like he did in his coming out party at the 2016 Futures Game and separates his shoulder, or steps on a misaligned sprinkler head in a far flung International League park and blows out his knee. The risks for him are far less substantial than a pitching prospect—there’s a reason Michael Kopech didn’t get this contract before his call-up—but one needs to only look across the clubhouse from Jiménez on the minor-league side to realize that there are risks involved, ones Jiménez is in a far lesser position to absorb than the team.

Okay, sure, on the continuum of strong-arming this is closer to “if you want the cash-back incentive for this luxury SUV you have to agree to waive your right to sue us in favor of binding arbitration” than “nice dry cleaners, would be a shame if anything happens to it.” So there’s rarely more than a smattering of public outcry at these kind of actions. It’s “good business.” One supposes the business of baseball teams is winning baseball games. But many baseball fans and large swaths of the media—to paraphrase Ronald Wright—think of themselves as temporarily unemployed financial advisors to billionaires.

They will cheerfully ignore that Reinsdorf is unlikely to supplement Jiménez’s below-market extension with premium free agent talent. White Sox upper management sure was indignant about how they couldn’t believe they got outbid by another baseball team—oh my stars—on Manny Machado. And as has been pointed out by many, many people, the largest contract the White Sox have ever given out remains José Abreu’s $68 million deal, signed in 2013.

The saddest possibility is that Jiménez’s under-market contract will just be a selling point to beef up the next haul of prospects the White Sox get in four years. The long-term security implied by this deal is not inherent, but illusory. The contract is a highly valuable and highly flippable asset, just like Jiménez the prospect. If and when is does happen, we will argue on Twitter about whether the team got a fair return or how much stock to put into Jiménez’s bad 2021 defensive metrics.

Maybe I’ll write another TA lamenting how Chicago had to sell off after not being able to put enough talent behind a tremendous young core of Adam Eaton, Chris Sale, and Jose Quintana Jiménez, Dylan Cease, and Nick Madrigal. Then I’ll debate whether it was too much or too little for the Red Sox to give up for a cheaply-signed Eloy Jiménez.

Here’s the full quote I reference in the title, by the way:

“The suffering of men must never be a mere silent residue of policy. It grounds an absolute right to stand up and speak to those who hold power.”

I wasn’t there at the beginning of Baseball Prospectus, but I do feel like the guiding hallmark of the site has always been an outsider banging on the castle walls. Writing in often impolite terms that there is, perhaps, a better way of building a baseball team. That’s changed, but it also hasn’t. I hope the next person who follows me maintains that spirit, in whatever form it takes.