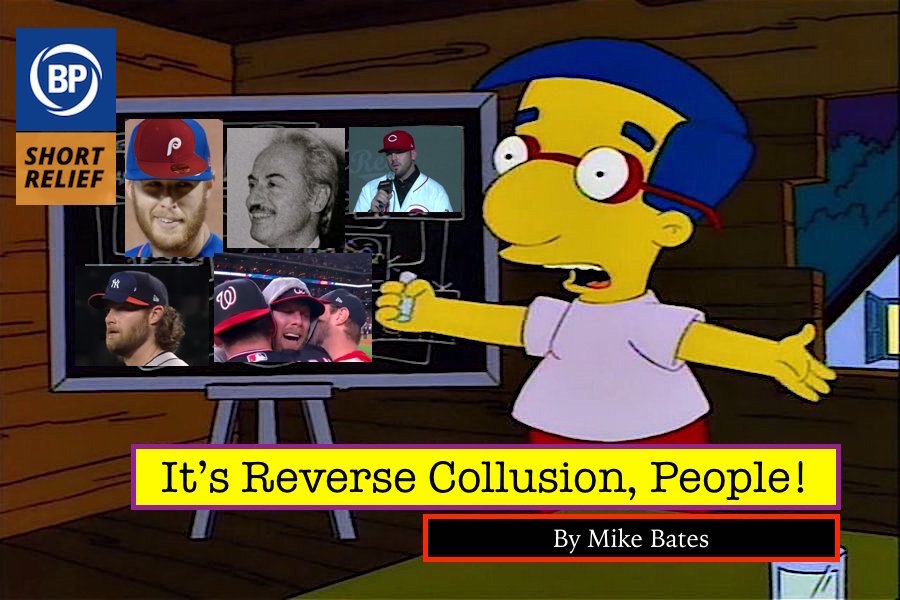 I have a cousin whose husband is deeply into the whole QAnon thing. He’s a bigot and has gone deeply around the bend and, frankly, I was worried about her and their child. But, once those concerns were eased, I became obsessed with his Facebook page, which was an alternate reality of codes and headfakes and deeply unintentionally hilarious videos popping up multiple times a day. Conspiracies can be deeply seductive for minds that are desperate to find order hidden in the chaos.

Eventually, I weaned myself off as I realized how much the cognitive dissonance between objective reality and the fantasy he shared with who knows how many others began to wear away at my mental health. I’ve never been a conspiracy guy; they just aren’t that interesting and the return on the investment in time and treasure most people put into them aren’t worth it.

But I think I’ve found one I can get into: Reverse Collusion. By now, we’ve all become aware of the looming threat of a work stoppage after the 2021 season if the Players Association and Major League Baseball can’t reach an agreement on a new Collective Bargaining Agreement. That would, I think we can all agree, be bad for baseball. It’s so bad, in fact, that even the owners can feel it coming in the air tonight.

And so they’ve decided to make this offseason just a little less awful than previous offseasons. Mike Moustakas? Don’t hold the line on three years. Give him four. Zack Wheeler? Five, at more than $23 million per. Stephen Strasburg had Tommy John surgery once? Ancient history: seven years, $245 mil (sorta). Gerrit Cole throws a baseball as fast as possible with a human arm thousands of times a year for a living? Nine years, 324 million (dollars for him, spit takes for us.) Hell, even Kyle Gibson gets $10 mil a year. And the cherry on top, as our handsome and talented editor Roger Cormier just pointed out to me, they orchestrated putting Marvin Miller in the Hall to show how reasonable they all are/get their final revenge on the former union boss.

If they make it juuuuuuuuust good enough, maybe they drive a wedge into the union and peel off enough support to prevent the catastrophe that might lead to actual economic restructuring in the game. Maybe they come out of this a little poorer in 2020, but a lot richer in 2022.

We know owners have colluded before to lower salaries and attempt to destroy free agency. Is it really so far fetched that they might conspire to save it as well? I don’t think so.

Of course, I don’t have any proof, only conjecture and coincidence. But that, right there, is the stuff conspiracy theories are built on, the nagging suspicion that this is all too convenient to be an accident. Everything seems too reasonable so far, especially given how things have gone the last couple years and how tough Rob Manfred has talked about the need to control spending.

Listen, you don’t have to believe me now. But pay attention. Watch the signs. Get a The Truth Is Out There tattoo. And find enough tin foil to line your baseball cap. And, if something should happen to me, know that it’s because I was too close to finding out what’s really going on and who the power is behind the power. And, for God’s sake, avenge me. 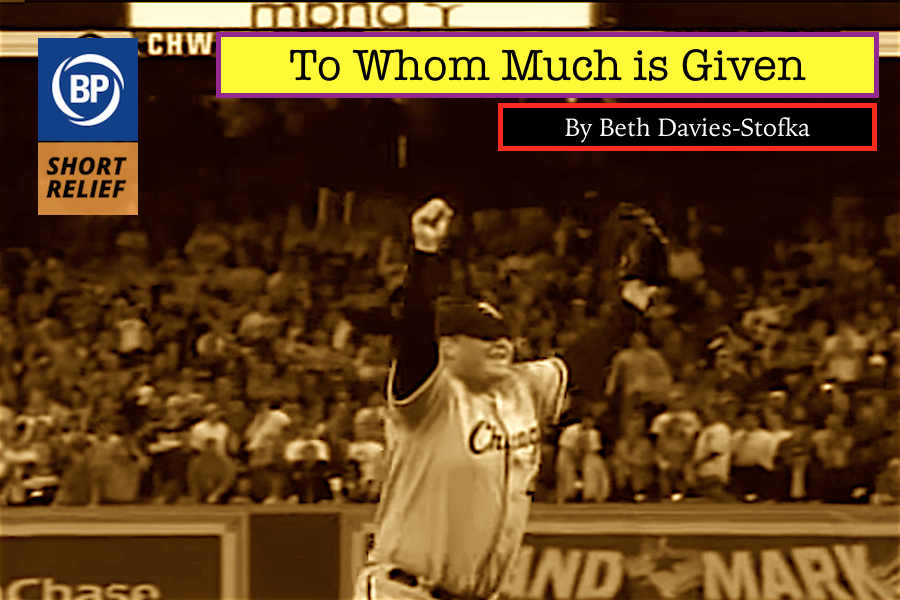 Last week, former closer Bobby Jenks published a feature in The Players’ Tribune in which he revealed the awful truth about a surgical practice called concurrent surgery, aka the surgery you wouldn’t wish on anyone. Large-scale evidence on the safety of the practice doesn’t exist, but intuitively, it doesn’t seem like a sound approach to caregiving. The American College of Surgeons, in its statement of principles, calls it “inappropriate.” But the statement contains some ambiguity.

It’s easy to imagine the problems inherent in empowering our surgeons to define which components of an operation are “critical or key.” At the same time, there may be inherent problems in regulating or prohibiting the practice. Perhaps we don’t want our surgeons policed by non-surgeons. This is a matter that you should look into, which is what Jenks wants you to do. He wants you to protect yourself and your loved ones.

And, if you’re up for it, he wants you to join his crusade to outlaw concurrent surgeries. His passion arises from the harm the practice caused him. He underwent surgery on his spine and the procedure was badly botched. It factored into the loss of his career and the end of his marriage. It fueled alcohol and drug addiction so shameful to Jenks that, he said, the feature had been “painful,” “agonizing,” and “rough” to write. He also said that it took him a long time to do it. I get that. It’s hard to expose yourself, scar tissue and all.

Behind every face is a story, the saying goes, but how many people get to tell their story? If you managed to survive a botched surgery and then screamed about it from the rooftops, would anyone hear you? But if a major leaguer manages to survive, he can litigate. He can expose the flaws in the system. And then, because it happened to an elite athlete and not your Uncle George, he can tell the world and the world will listen. The platform is the gift and burden of the ballplayer. When you think of the price he paid for it, it’s inspiring to see how Bobby Jenks is using his. 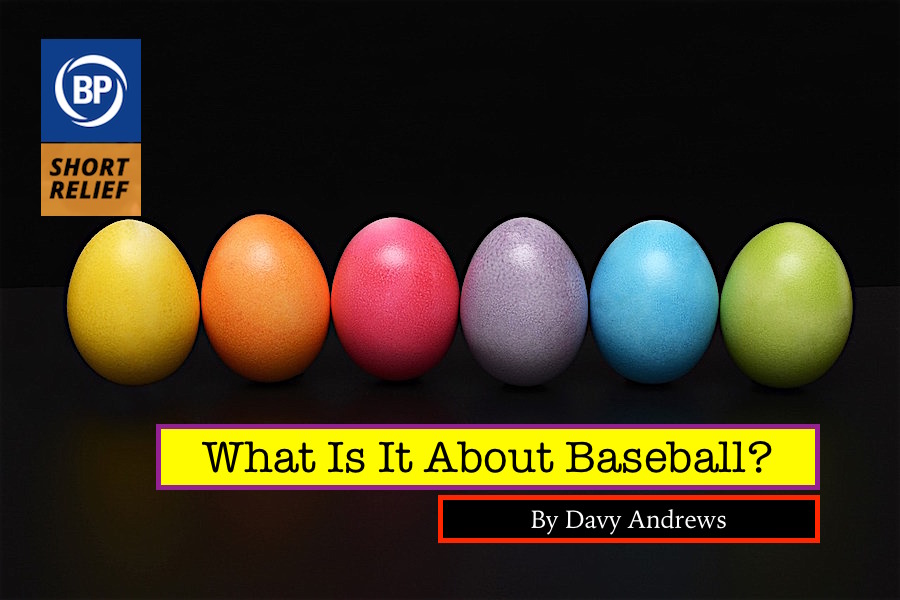 I could keep going. I like baseball because it doesn’t have fouls or penalties.

I could get cliché. I like the smell of the grass, the crack of the bat, the roar of the crowd.

I could get culinary. I like that you can be great no matter what size egg you are:

[Fun Fact: By this scale, Pee Wee Reese would have been a medium egg. Jumbo Díaz would very definitely still be a jumbo.]

The question has been coming up a lot lately, mostly on dates. I’d like to think that it’s because I’m getting better at dating. I’m getting better at figuring out whom I can connect with, better at being open with them. One possible consequence of allowing yourself to be seen, it turns out, is learning that you like baseball so much that it requires an explanation.

What I think is that baseball was wired into me so early on that it just makes sense. It feels right, bone-deep. But that’s a hard thing to communicate. “Baseball is my birthright,” is not a thing that you say out loud to someone if you harbor any hope that they might one day want to make out with you. I don’t know how to explain it. All I know how to do is to illustrate it. So I tell stories:

How even though I’m left-handed, I lost my glove when I was little and I spent so much time playing with my older brother’s glove that I now do most things right-handed. How when my brother was born, my parents were excited because the hospital had a color TV and they didn’t have to watch the World Series in black and white.

How we played so much wiffle ball growing up, trampling bare the ground near the bases and the mound, that my backyard literally looked like a baseball field. How I used to draw on white undershirts with Crayola washable markers, turning them into baseball jerseys with misspelled names and polygraph pinstripes.

How when I’m in a window seat I still catch myself searching the ground below for baseball diamonds.

I like baseball because it somehow makes it acceptable to eat ice cream out of a helmet.

I like baseball because without it I’m pretty sure Mike Trout would just be some dude who works at the National Weather Service.

I like baseball because have you ever tried watching cricket?