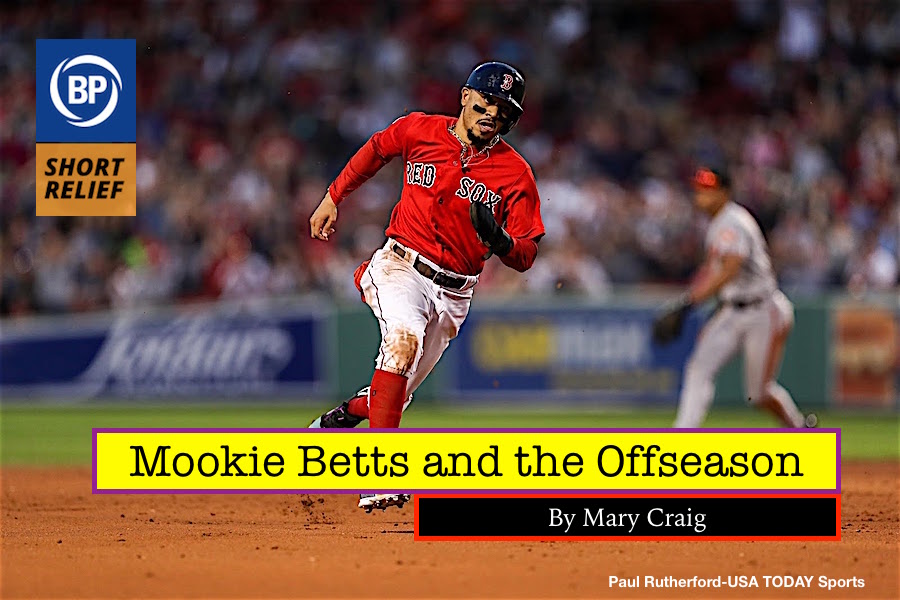 As you have probably heard, the Red Sox, just like the majority of other teams, are dedicating themselves this offseason to significantly trimming their payroll. As part of this absolutely bogus project, the team will likely try quite hard to trade Mookie Betts, who is projected to earn $27 million in his final year of arbitration. The only problem with their attempts to trade Mookie is that every other team is also reluctant to have to pay him that much.

As a Red Sox fan, watching Mookie these past seven seasons has been an absolute joy. He embodies everything that is and should be fun about baseball. Not only is he skilled both offensively and defensively, he matches this skill with personality. He has so much charisma that he has managed to make bowling seem incredibly cool, a feat so difficult not even The Dude could pull it off. Mookie is so transcendentally good across all categories that declaring him your favorite player isn’t boring or pedestrian; it’s the correct choice, and everybody knows it.

One of the problems with the current state of Major League Baseball is that it detracts from the presence of players like Mookie. As much as I adore watching him, I’m never able to enjoy him as I ought to because I’m constantly angry about how the team has treated him. I would love for him of his own volition to play for the Red Sox for the entirety of his career, but I know that he deserves better. He deserves respect, security, and appropriate compensation for his work, as all players do, and he has thus far been unable to receive it.

If he remains with the Red Sox this offseason, I will appreciate the pseudo-proximity fandom allows us to have with players on our favorite teams. But doing so will come with an asterisk, with the knowledge that it is only possible because every other team would rather field a worse player who they could pay less and control more. 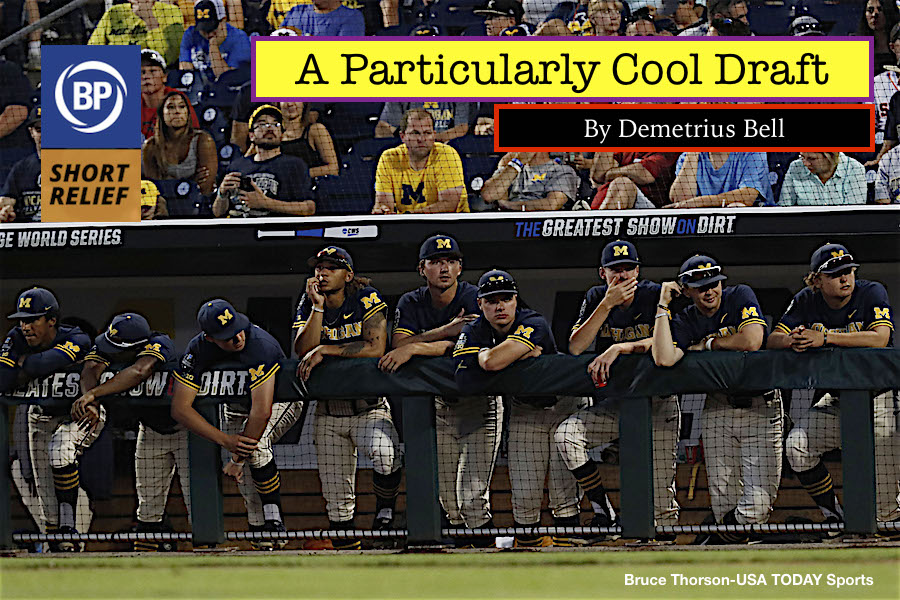 This past June, I talked about the MLB Draft and how it was incredibly quaint and small when compared to its cousins in the NFL, NBA, and the NHL. I also lamented the fact that even though those other drafts were larger in scale and felt like bigger events, I still felt little-to-no interest in actually sitting around to watch the thing since you could just catch the results on your smartphone.

While MLB (and the other leagues) is still going to be fighting an eternally uphill battle when it comes to fans like me, they’ve still decided that it’s time to shake things up and give their selection show a boost and make it an actual event. On Monday night, word got out that MLB was moving its draft from their humble New Jersey studio to Omaha, Nebraska.

This makes so much sense that it’s honestly shocking nobody else figured it out before the year 2020 came around. Omaha becomes a special place during mid-June — the Nebraska city has been the site for the annual College World Series since 1950. While the entry draft is also open to high schoolers, this provides a perfect opportunity for more players to attend the draft. There’s no guarantee that top college prospects are going to make it all the way to Omaha in the same year where they’re getting drafted, but it’s now possible for those special players to add the experience of the draft to their College World Series experience as well. Equally nice is the draft dates getting pushed back one week to June 10th-12th, during the break between the Super Regionals and the College World Series, so some of the higher picks will be much less preoccupied during literally the most important moment of their lives.

It’s a wonderful idea and this should definitely accomplish its goal of spicing things up. At the very least, this will give fans the opportunity to see any potential draftees actually taking a picture in their jersey moments after being drafted. I’m sure that teams would still go through with the traditional meet-and-greet at the big league club’s ballpark that top draft picks normally do, but this setup would make it so that fans wouldn’t have to depend on low-quality video in order to make their first mental image of their organization’s newest player in their team’s jersey. Draft photo-ops are cool for everybody who’s involved and now MLB will have way more opportunities to get those in with the players who earned their way there.

Will this get me to watch the draft? Again, I’m still probably going to just keep an eye on Twitter and Instagram (yes, Instagram) for the draft results as they come in. I’m too deep in that particular pool. However, this move isn’t about me — it’s about the players and it’s about the fans of amateur baseball in Omaha that get to have another cool baseball event right in their own backyard. As long as those groups of people are happy, then I’m happy. 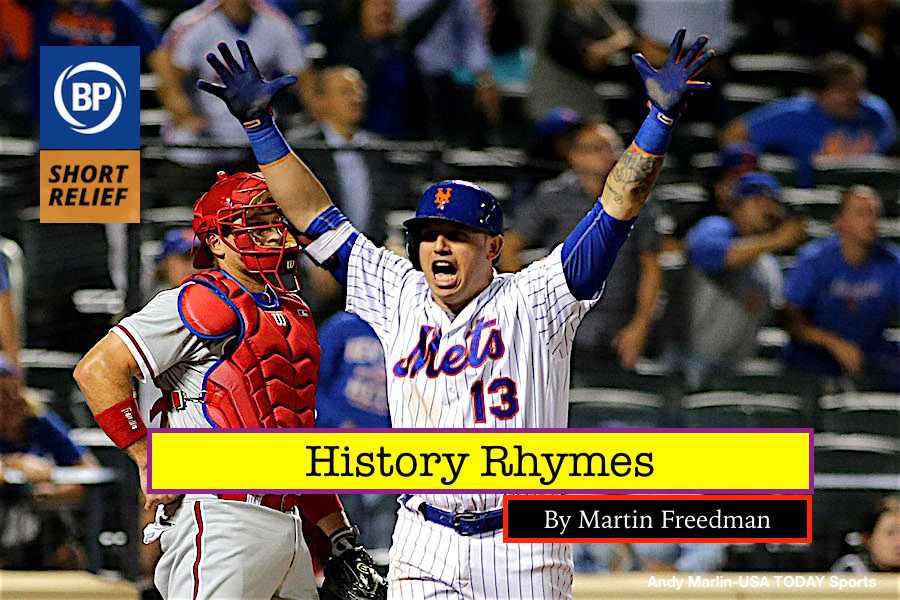 I’ve seen the question posed elsewhere — have you ever left a game early only for a classic ending to unfold? For the last three few years I’ve had one answer to that question. I now have two, and I’m struck by the similarities of the games and how my own life has unfolded in the intervening years.

September 22, 2016 — the Mets, fighting for a playoff spot, are playing the Phillies at Citi Field, but have fallen behind 6-4 in the eighth inning. I’ve been working at a coffee shop for just over a month, and all night, sitting in the upper deck with my father, we’ve been looking at the clock nervously as my morning shift looms. With the Mets losing, we pull the plug and head home. On the way to our abode, we learn that the Mets tied the game in the ninth and sent it to extra innings. Shortly after we arrive home, Asdrúbal Cabrera hits a walk-off home run and flips his bat into the next borough. We’re thrilled to see it on TV, but we definitely wince as we realize we missed out on that ending.

Less than a week later, thanks to herniated discs and pinched nerves leaving me unable to stand comfortably for extended periods of time, I lose my job at the coffee shop. I left an instant Mets classic for nothing. I watch the Mets lose in the Wild Card Game with an ice pack on my neck.

September 29, 2019 – Closing Day at Citi Field. It’s a meaningless game, with the Mets eliminated and Atlanta looking ahead to the postseason. We don’t leave this game in the eighth; we leave it in the top of the eleventh, after the Mets fall behind. This time, leaving when we do is a different calculus: “If we want to catch the 7:04 train home, we have to leave now. Otherwise we’ll be waiting an extra half hour on the train platform.” It’s my dad’s logic, but I can’t disagree.

“We’re never leaving a game early again, are we?” asks my dad, dryly.

Who knows, Dad. There’s always something that comes up. Like the office job I’ve had for a year now, where I don’t have to worry about my back. Plus, maybe if we leave early, it’ll happen for a third time. You never know, right?

You need to be logged in to comment. Login or Subscribe
Gregory Hardy
My brother-in-law took him mother to Fenway on Mother's Day in 2007 to have a special day at the ballpark. Alas, the home team was trailing 5-0 and my brother-in-law suggested they leave early to beat the traffic. The Mother's Day Miracle has become part of Red Sox lore, and part of our family lore as well. My brother-in-law actually confessed to rooting against the Sox while they were listening on the radio in the car because he, in his own words, is "a terrible person." Luckily, the baseball fans in the family only bring it up EVERY Mother's Day.
Reply to Gregory