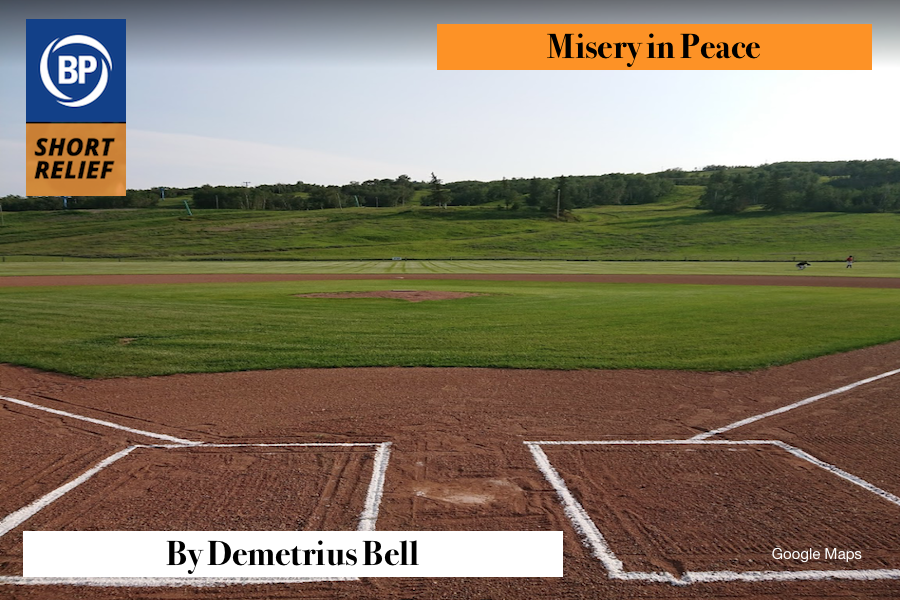 Peace River in Alberta, Canada is a small town that’s mainly on the sports map for being the sole host of the 2004 Alberta Winter Games and the co-host of those same Winter Games in 2010. With that in mind, one of the places in Peace River that you’d be visiting if you were into that sort of thing would be the Misery Mountain Ski Area. However, if you’re in town to watch some recreational baseball then you’d be visiting the Misery Mountain Ball Diamond, which is nestled in the shadow of the ski park.

While the ballpark in Arrey, New Mexico may have served as an example of baseball being played in desolation, this is an example of baseball being played with a beautiful backdrop. As you would expect from a baseball field that’s right next to a mountain range, the outfield view is gorgeous. I envy any kid who got an opportunity to play baseball there. As a matter of fact, I envy every single kid who got a chance to use a mountain as a batter’s eye. It may be boring to you but it’s the wildest thing for me to think about.

While Misery Mountain Ball Diamond may be the coolest named ballpark in Peace River, Alberta, it wasn’t the most picturesque. That title went to the 12 Foot Davis Ball Park. The stadium was named after local icon Henry Fuller Davis, whose exploits during the gold rush era earned him his nickname. In addition to having a statue in Peace River, 12 Foot Davis also had a baseball park named after him and it was truly one of the most unique ballparks that you’ll see anywhere on the planet.

It was perfectly nestled in the valley of a hill, with a bridge serving as the only way that you could even get to the stadium. Additionally, there was a river creek surrounding the outer boundaries of the stadium, and there are so many trees circling the stadium that you’d think that they basically served as the outfield boundaries before they thought about putting up a wall. If it sounds too beautiful for this world, then you’re right — as this article noted, 12 Foot Davis Ballpark eventually couldn’t keep up with the new standards and the stadium was recently turned into a green space for events.

Either way, the people of Peace River are kinda lucky. Not only did they get to enjoy local baseball in their quaint little town, but they also got to enjoy two of the most lovely views when it comes to baseball stadiums. For now, they’ll have to stick with one, and hopefully Misery Mountain ends up being a baseball heaven for anybody who likes to play the game in that neck of the woods. 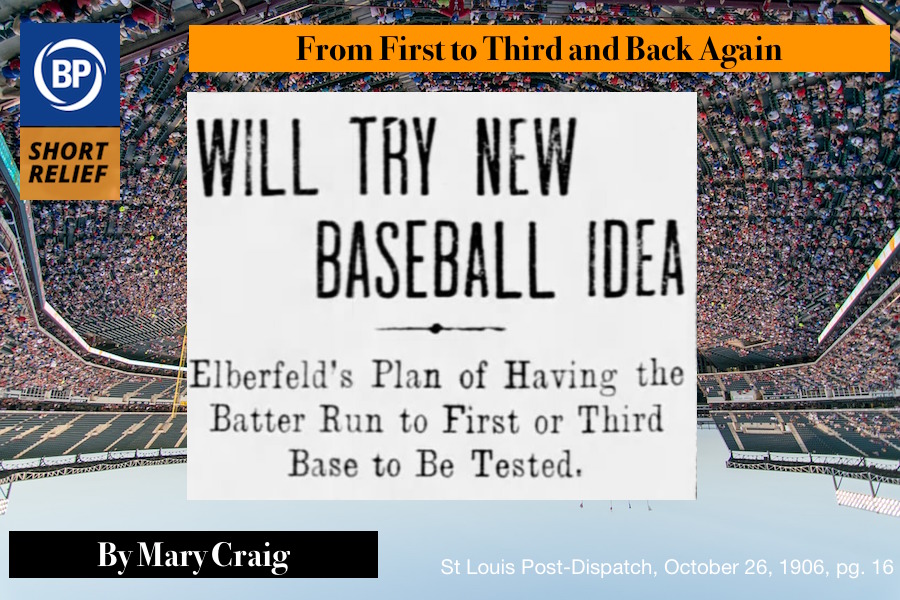 Baseball is generally thought to be a serene, bordering on dull, sport in which the standing around is plentiful and the action sparse. Such an understanding of the sport has led many in its history to attempt to fill the moments of action with as much chaos as possible. Following the 1906 season, New York Highlanders’ right fielder, Norman Elberfeld, proposed a rule change that would maximize chaos during many an at-bat.

Elberfeld, who was most known in his career for physically and verbally assaulting umpires, declared to St Louis Dispatch writer Joe Finnegan that the game was biased in one particular way toward left-handed hitters: a batter’s first move upon making contact with a pitch is to run to first base. Not only is this unfair to right-handed hitters, who have their backs facing the base following their swing, but it creates a boring level of predictability. Instead, Elberfeld proposed, batters should get to choose whether to run to first base or third base.

On its surface, this seems like a fairly tame proposal, but Elberfeld did not stop there. Instead, he suggested that batters should get to choose their base without alerting anyone on the field to their choice. Not only would this alteration to the game create confusion for the defense, it would force the infielders to be versatile defensively: third basemen and first basemen must be prepared to play both positions, and likewise with second basemen and shortstops.

This proposal had the backing of Highlanders’ player-manager Clark Griffith, New York Giants’ pitcher Joe McGinnity, and Orendorff, a catcher for one of the Trolley League teams, the latter who of whom tried it out in the offseason. Although the latter two both endorsed the rule change as a great way of introducing excitement for player and fan alike, by the time spring training approached, Clark Griffith abandoned the idea, instead focusing his efforts on preparing his team to battle for first place in the AL.

Following these few months in the fall of 1906, the idea has been tossed out by a handful of other figures, though each instance marked more by humor than sincerity. Maybe baseball is better off with long pauses marked by measured action, with devotion to the beautiful rather than the absurd. 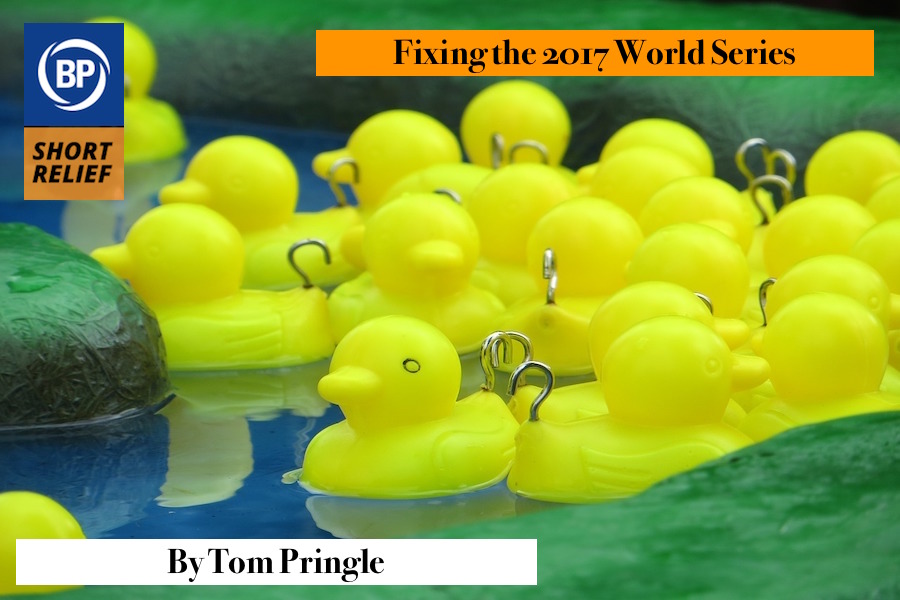 On an episode of the Bat Flips and Nerds podcast, we mused the idea of the final Yankee Stadium postseason game being rained out for a second evening. With no spare off days left, what would MLB do? Surely MLB wouldn’t do what UEFA did in 1968, during a semi-final in the European Football Championships, deciding the winner by coin toss?

Well, it didn’t rain and MLB didn’t have a problem on their hands. Discussion defunct.

However, Manfred and friends may have a rather larger problem on their hands, if it turns out that the Houston Astros, and their alleged bin crashing ways, helped guide them to the 2017 World Series.

Would MLB insist that the Astros and Dodgers play out the World Series again? Would trades be reversed, free agency be nulled for seven-games, Carlos Beltrán made to strip from his Mets uniform and suit up for the Astros once again?

So what should MLB do if indeed it turns out the Astros and their plastic percussion passion turns out to be true?

Who will be the 2017 World Series champs?

We need a solution and a seven-game series ain’t it. Let’s explore some other options.

Home Run Derby
Pros – We all know the format, quick to setup, can be done prior to Spring Training.
Cons – Teams have time to prepare for this during the offseason. Also, I don’t like it.

Skills Contest
Pros – Could contain lots of baseball skills, including base running, fielding etc.
Cons – Prime opportunity for players to get injured before the season even begins.

Fairground Games – Hook-a-Duck, Dunking For Apples, Rifle Shoot, etc.
Pros – Levels the playing field, allows a local fairground to make some cash.
Cons – Danger of hook from hook-a-duck ending up in someone’s eye, players may drown on apple dunking trying to stay in there for too long.

Welly Wanging (It exists)
Pros – A true level playing field, zero chance of anyone in baseball having any experience of this.
Cons – Prime opportunity for players to end up with a Wellington Boot in the face. No one wants that.

Medieval Jousting
Pros – Glorious (and gory) entertainment, incredible strength required, great opportunity for some fantastic outfits and accessories.
Cons – Players and horses may die in trying to decide the outcome of a series of baseball games. Could ruin the outfield (if done in a ballpark), with the horses running all over the place. Blood on uniforms isn’t fun.

The options are limitless.

If though, after all of those events, it’s still a tie, then we’ll toss a coin. 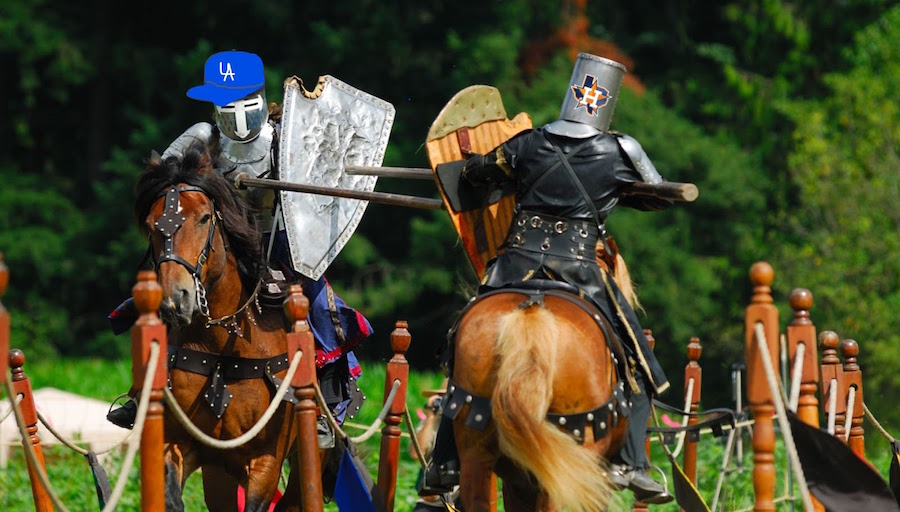