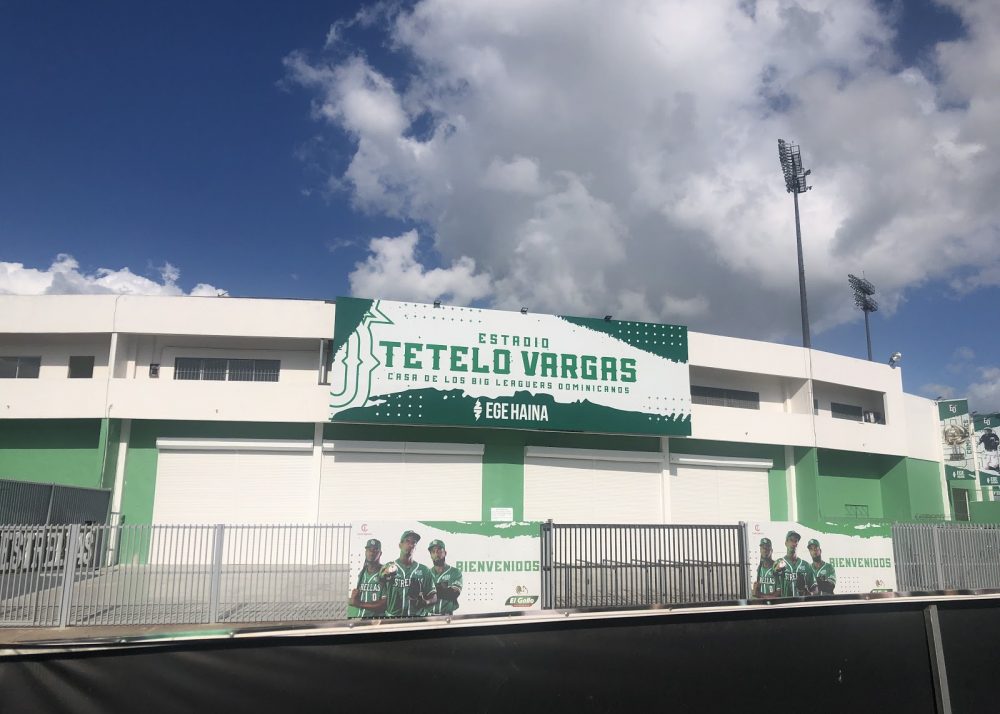 Remember the 2016 Cubs? Won the World Series, broke that crazy curse. Kind of a big deal. Well imagine if the following season the Cubs, just months removed from breaking sports’ most notorious curse, had a dreadful .350 winning percentage in June. But rather than giving this theoretical timeline’s Joe Maddon some leash for winning the North Side a World Series eight months earlier, Theo Epstein and crew canned their skipper before the All-Star Break.

Still following? Now imagine Joe Maddon also happened to be Kris Bryant’s—the team’s best player and face of the franchise—dad. And let’s say after dad got fired, Bryant and Anthony Rizzo went on Instagram to defend the fired manager and urged the Cubs to deal him them both to another team as long as Maddon remained fired.

That whole thing is Insane, right? Well, that’s essentially what happened earlier this month in LIDOM with Estrellas Orientales, the Dominican’s version of the Chicago Cubs.

San Pedro de Macorís is a baseball town. I mean, the whole Dominican Republic is basically a baseball town, but this is the baseball town in the baseball country. You can’t walk around the city for five minutes without seeing a group of teenagers training together on a dusty field or a few children tossing rocks to one another in an alleyway. As of 2019, the city of around 150,000 people had produced 102 big league players. This is where superstars like Sammy Sosa, Fernando Tatís Jr., and Robinson Canó grew up, where their major league dreams kicked off. But while San Pedro is known around the world for its heroes who left and got famous somewhere else, the local team, Estrellas Orientales, remains the most fixed and essential baseball institution in the world’s most passionate baseball town.

San Pedro’s love affair with baseball began in the late 19th century when the sugar industry boomed, bringing with it American investment and thus, baseball. Founded in 1910, Estrellas began as a way to unify the various sugar plantations teams in the area to try and take on the more dominant Santo Domingo clubs.

And like the Cubs, Estrellas’ history is littered with devastatingly close calls and unfortunate luck bordering on the bizarre. For instance, they came back from a three-game deficit in the 1975 final only to lose Game 9 (yes it’s best-of-nine) with MLB fire-baller J.R. Richard on the mound. In the 1981-82 playoffs their two best players got into a car accident on the way home from clinching the finals. In 2002 they assembled a stacked roster that included Vladimir Guerrero, Julio Franco, Morgan Ensberg, and Alfonso Soriano, but didn’t make it out of the round robin because they tied a game that couldn’t be replayed because of a technicality. To go 50 years in a six-team league (1951-1982 there were only four teams, 1982-1996 there were five) without winning a title takes some otherworldly bad bounces.

But then finally, in 2019 it actually happened. Estrellas actually won. Managed by Macorisano Fernando Tatís, Sr., the team breezed to a first-place finish in the regular season before squashing 50 years of misfortune in the playoffs. The middle of their playoff lineup featured an extremely rare one-two punch of local, major-league-caliber hitters in Fernando Tatís, Jr. and Miguel Sano. Reds prospect Jose Sirí was a clutch late-season pickup in the leadoff spot and baseball’s most famous jumbo, Jumbo Díaz locked things down as the team’s closer. When Diaz got Juan Apodaca to pop out in foul territory for the clinching out in Game 6, San Pedro erupted into a celebration for the ages.

The Tatíses were hailed as saviors, legendary heroes forever exalted in San Pedro baseball lore. But once all the confetti settled, there was a LIDOM title to defend in 2020. Unfortunately for Estrellas, both Tatís Jr. and Sano had exceptional seasons for their MLB clubs, so exceptional that both were unlikely to receive permission to play winter ball this season. As is the case with most teams in the league, Estreallas had to slot in minor league or indie ball players to fill the spots. So without their best players in the mix, the San Pedro club got off to a championship hangover for the ages, starting the year with an abysmal 5-15 mark. And then things got worse.

That’s team GM Manny Acta—a well-respected baseball dude who you may recognize as the current Mariners third base coach or as the former manager of the Nationals or as a former ESPN analyst—addressing the media alongside Tatís Sr., announcing the skipper had been relieved of his duties. Acta noted that he personally disagreed with the decision, that the board of directors above him had actually overruled him on this. He thanked Tatís Sr. for his service to the team and the city and mentioned that Tatís Sr. was being offered a role in the front office—an offer Tatís eventually declined.

Tatis himself then spoke to the media, saying he respected the decision taken by the team and was aware that the team had been playing poorly and the manager is traditionally the one who has to face the consequences.

In general, managers and general managers in LIDOM tend to get a much, much shorter leash than their MLB counterparts. Because there’s no organizational rebuilding, no five-year plans, every fan base expects their team to contend every single season. Anything short of making the round robin playoffs is a failure. That means in an average season, between 3 or 4 teams—that’s 50 to 67 percent of the league—will fire their manager at one point or another if things are looking bad. That’s like if 15 to 20 MLB teams let their skipper go every season. That’s absolutely wild.

For example, earlier this week, after a three-game losing streak, Escogido fans were up in arms on Twitter, calling for the club to fire manager Buck Britton. The team was tied for first place in the league at the time.

But even within the league’s traditionally ruthless managerial expectations, fans were shocked to see Estrellas kick Tatís Sr. to the curb so quickly.

“When I saw it, I thought it wasn’t real,” said one Estrellas fan I talked to about Tatís Sr.’s firing, “I immediately started searching to see if anyone else was reporting the same thing.”

The crisis only intensified later that day when Fernando Tatís, Jr. voiced his disgust on Instagram with a post condemning the team for firing his dad and asking to be traded.

Sano posted something similar. A few days after that, hundreds of fans rallied together outside the stadium during a game to blame Acta and the team for disgracing Tatís Sr. They chanted and held candles to simulate a vigil based around the idea that they were mourning what the believed to be the death of their favorite club.

Then this past Sunday, Tatís Jr. was interviewed at a charity event where he reiterated his desire to be traded. This time he was more specific, requesting to be dealt to Escogido, the team Tatis Sr. played for.

Then on Monday, Tatís Jr. did a sit-down interview where he defended his own actions, noting “I’m a son before I’m a baseball player.” Based on my understanding of it all, the Dominican baseball world is pretty split on the whole thing.

Some people I talked with around the league believe Acta and the rest of the front office were well within their rights to let Tatís go. If the manager isn’t getting the job done, you’ve got to do what’s best for the team, even if the fans disagree with you. These same folks also think that it was immature and unacceptable for Tatís Jr. to post his frustrations online. It’s fine for him to be mad that his dad got canned, but they believe he should have handled it in private, spoken to Acta behind closed doors, instead of putting the entire organization on blast on Instagram.

But most people, and basically all of the Estrellas fans, are backing the Tatís family. They think the front office should have given more respect to a club legend, especially so soon after he helped break the curse. Tatís Jr also claimed that Acta never reached out to talk privately, either before or after his dad got the heave-ho, and thus has a right to be pretty ticked off. Even the legendary Ozzie Virgil, the first Dominican to ever play in the big leagues, came to the Tatíses defense.

I tend to lean towards this side of things, personally. I’m a relative newbie to the world of Dominican baseball, but firing your best player/club legend’s dad 20 games after he leads your team past a 50 year curse sounds like bad business in my opinion. And riding or dying with Fernando Tatís Jr. seems like a pretty good strategy for the time being.

Maybe it’s worth noting that since the manager change, Estrellas has picked things up slightly with a 4-5 record in that span, even though they remain last in the league standings. Attendance has plummeted during that time as well, the game in San Pedro I went to last week couldn’t have had more than 800 people in the stadium as some fans intend to boycott the club until the club apologizes for “Tatísgate.”

I’m not totally sure how or when this entire situation will get resolved—one scout told me it doesn’t really matter because it’s unlikely the Padres ever let Tatís Jr. play in LIDOM again—but for now it’s the most entertaining drama unfolding in Dominican baseball. So if you’re just getting up to date on this, pull up a chair and open up a bag of popcorn, it might only get spicier from here.

You need to be logged in to comment. Login or Subscribe
Fantastic rundown of this chain of events. The LIDOM is something I've followed for a few years but there's so much that's fairly foreign compared to US baseball.
Reply to roydjt