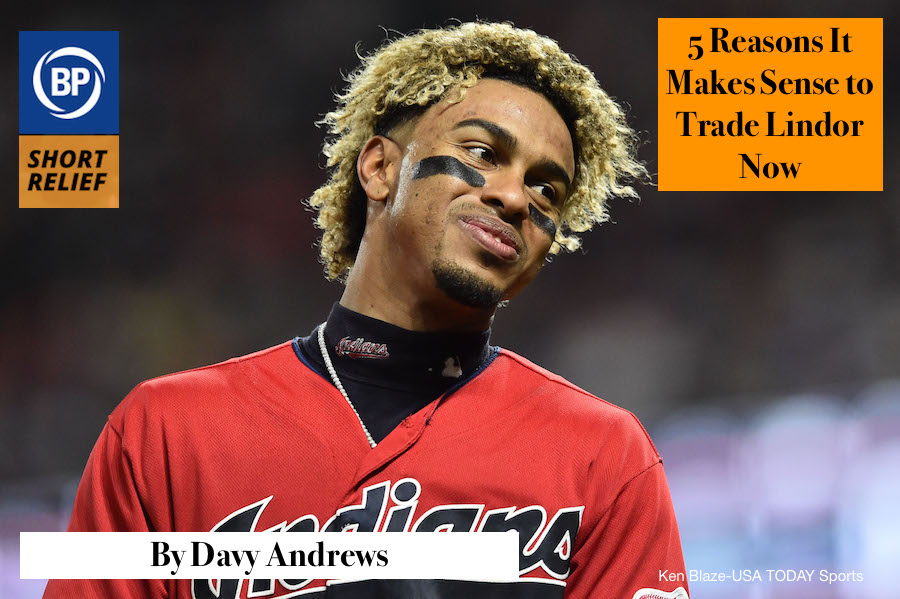 This is a confusing time to be an executive. Smart people do smart things, like gutting the storied franchise with which they have been entrusted, and then total strangers say mean things about them. What gives those strangers the right to be so hurtful? Nothing at all, except for the fact that they have loved that franchise for their entire lives.

Don’t listen to the meanies. Remember how smart you are. You are so smart! You run a Major League Baseball team. Did that happen by accident? Of course not! It happened because you were the best man for the job. That’s why your dad hired you. So to fortify you on your heroic quest for monetary savings, here is a reminder of all the reasons you should consummate the evisceration of what was so very recently a World Series roster.

1) You don’t care about winning.
Since the moment he set foot on a big league field, Francisco Lindor has been the most valuable shortstop in the game. But that’s only if you define ‘value’ the way that everyone normally defines it. Who cares if he wins baseball games? Everybody knows that winning is for losers.

2) Francisco Lindor wants your money.
Francisco Lindor — and you’re not going to believe this — refuses to play baseball for free. He seems to be laboring under the delusion that he is entitled to compensation commensurate with his talent. Just because he’s the best in the world at what he does, now he thinks that he finally deserves to be paid what he’s worth? What a butthead.

3) You don’t care about your fans.
Remember those mean people we were talking about earlier? The ones who are desperate for a winner but would gladly settle for a team that seems like it’s genuinely trying? They love Francisco Lindor. It’s hard to know what they see in him. Maybe it’s that he’s young and handsome and charismatic and, again, literally the best shortstop in the world, but who can say for sure?

Ignore the fans. Sure, they might spend more of those dollars you’re so voracious for if you just pretend for one goddamn moment that you actually care. But they’ll probably spend some money anyway. After all, they love your team. They love it. And what is your job if not to discover exactly how deep and exploitable that love truly is?

4) You want prospects; sweet, delectable prospects.
If you trade Francisco Lindor, you will lose two years of brilliant, marketable baseball at below market rates. But guess what you’ll get in return: Prospects. Did that turn you on a little bit? Go ahead, take a minute to calm down.

What fool would keep one perfect, beautiful butterfly when they could have three to five caterpillars? Further, because Francisco Lindor is — and I hate to sound like a broken record here — good at baseball, he will fetch some promising prospects. Players who could be great. Well, not Francisco Lindor great. That would be crazy. What kind of dummy would trade away the next Francisco Lindor? But still, pretty good. Oh, and prospects get paid almost nothing. That could maybe, possibly be a factor as well.

5. You just don’t care.
There are a million reasons to hold onto Francisco Lindor, even if you can’t sign him to a long-term deal. Bolstering the roster just a little would make you a World Series contender for these next two years. Contending and holding onto fan favorites is how you build up goodwill, attendance, viewership, all the things that end up turning into money. But do you really care? 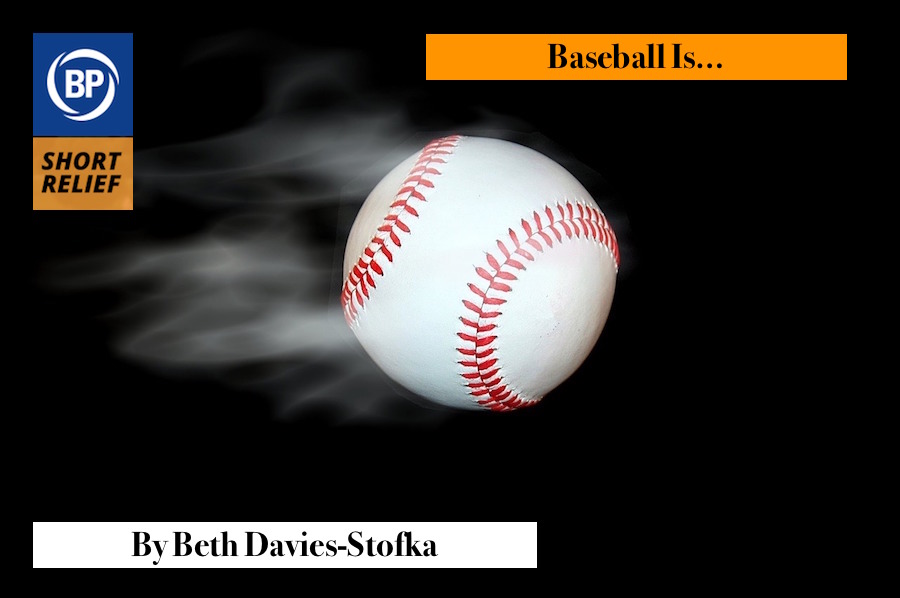 There is a little game we can play, an old icebreaker from the surrealist playbook. Surrealism can’t make the everyday realities of cheating and violence vanish. Surrealism is not magic! But it has a way of exposing the magic in the everyday. Magic lurks everywhere. Do you see it? It’s in the smoke of cigars, the banging of cans, and especially in the hearts of your fellow travelers in this life, the ones who will bluntly tell grown men that it’s time to start doing the right thing. Playing a surrealist game can help us expose the magic by engaging our senses beyond our bodies, and even our dissociated feelings. It can remind us that there is such a thing as “baseball” that transcends the rotten muck through which we now wade.

The game works like this: Go outside (this part is non-negotiable). Activate your senses. Experience everything, and make lists. One should be a list of nouns, and one should be a list of adjectives. Then, while you’re waiting for your laundry to dry or your dinner to finish cooking, play with your lists. Combine the words. Find the combinations that feel the best to you. Your goal? An ontology of baseball, something you can articulate beyond the sewage of current moral trends. This is what I did. I call this game, “Baseball Is”.

I feel better. It’s your turn. Have fun with this, and while you’re at it, take note that your results have a practical use as well. This is a really good way to come up with a name for your garage band. Turn off the radio and make music. Happy offseason! 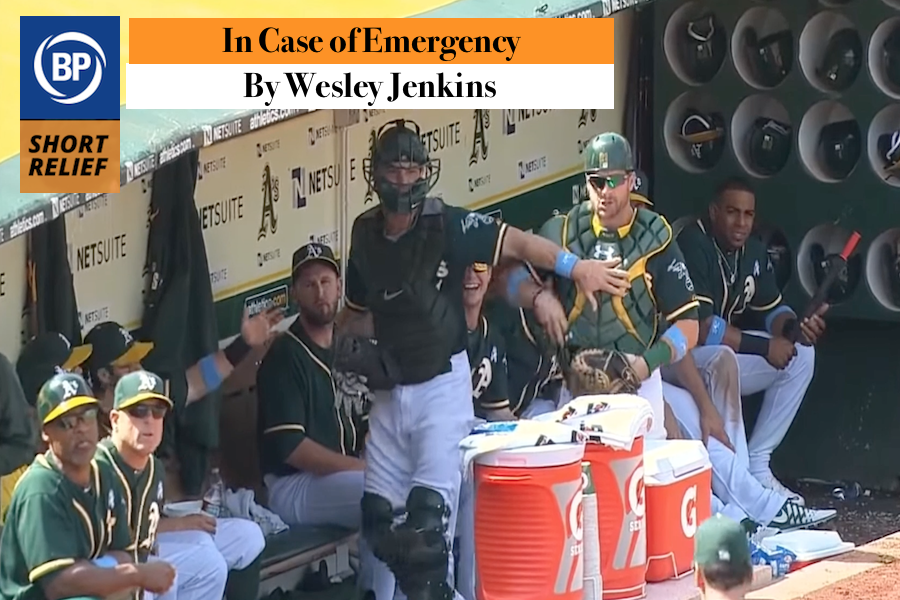 Emergency catchers have long captured baseball fans imaginations because, well I’m not quite sure why, but I think it’s because we can all relate to being thrown into a situation we are wholly unequipped to handle. In August, Lucas Apostoleris chronicled all of the instances of emergency catchers he could find for the last twenty years, most thrust into the role through a bizarre set of circumstances.

I always thought it was a distinctly American problem: the professionals who play our national sport are so specialized they can’t handle a new role within the same sport. It seemed that way at least until Kyle Walker came along.

Odds are, you have no idea who Kyle Walker is. “Is he that Mariners prospect?” you might think to yourself, and because every member of the world wide baseball web is a Mariners fan, it’s a good guess. But no, Kyle Walker is not Kyle Lewis.

After the team’s starting goalie was hurt mid-game and his backup got sent off on a red card, someone needed to tend the goal. Enter Walker, a man, who had the central tenet of soccer — never use your hands — drilled into him since he first dribbled the ball, suddenly able to use his hands. Walker donned the pink-purple jersey of ignorance and stepped between the sticks. Watching Kyle Walker play goalie, I learned emergency goalies are really no different than their American counterparts.

Some similarities to ponder:

And a video exhibit to prove my point:

Ederson was subbed off and Claudio Bravo got a red card—so Manchester City are finishing with Kyle Walker, a defender, in goal 🧤

As the opposing player lines up to take the shot, much like a pitcher winds up, Walker gets into a crouch. The ball, delivered low and outside, would be routine for any starter or anyone who actually plays the position but presents a challenge for our emergency man. Walker, channeling his fundamentals, puts his chest in front of the ball and keeps it in front. There will be no goals on this emergency catcher today. Walker bounces the ball once to show he has this under control. He waves the team up because the Englishman, despite being wholly unprepared, performed just adequately enough.