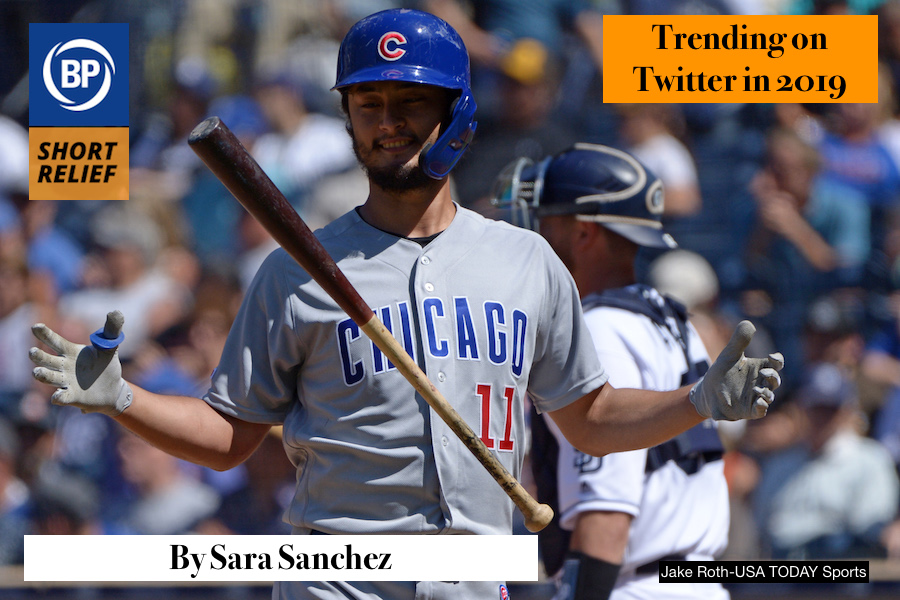 It’s been a bad month for baseball news. Every time I turn around there is a new scandal and every single one leaves me feeling drained, angry and/or sad. I mean, it’s really only been about a month and it included all of the following: The Brandon Taubman affair, the shocking revelation of the opioid scandal in the Angels organization that contributed to Tyler Skaggs’ untimely death, new revelations about the ball, the news that MLB may cut as many as 42 minor league teams, the Giants’ decision to hire Gabe Kapler despite concerns about how he’d handled sexual assault accusations during his time with the Dodgers, and now the Astros’ sign stealing scandal that honestly just keeps getting more bizarre.

Baseball is supposed to be my break from the constantly accelerating news cycle. An island of reason in the chaos. The greatest part of the baseball season is that almost every night between late February and late October I am guaranteed at least three hours where I can focus on double plays, dingers and pitch selection. And here we are, three weeks into the offseason and even pitch selection is a scandal.

So in retrospect, Yu Darvish should have probably known that nothing good could come from trending on Twitter last week, but you’ve got to love his optimism.

Actually, I need to revise that. Something remarkably good did come out of Yu Darvish trending on Twitter: Cubs Twitter finally seems to appreciate the social media MVP on the team. It is not Javier Báez with his swag and adorable son. It is not even Anthony Rizzo with his inspiring hospital visits and a cute new puppy. No, the social media MVP on the Cubs is absolutely Yu Darvish. Admittedly, some Very Online Cubs fans have known this for a while now. But all it took for the rest of Chicago to wake up to this reality were some looks back at Darvish facing the Astros in the 2017 World Series, a post drawing attention to a mildly suspicious moment in a Brewers game, Christian Yelich protesting too much and a few headlines that, at least from my utterly unbiased Cubs’ fan perspective, vilified Darvish in this exchange.

In a baseball news cycle that shows little sign of getting better in the short term, Darvish is a much needed laugh from his ideas for treating blisters (put pee on it) to engaging the grammar police (literally) to poking fun at his own day trending on Twitter by retweeting a story about him being the victim of a hit and run.

Between @Faridyu and Baby Yoda, I might make it out of this late 2019 baseball Twitter after all. 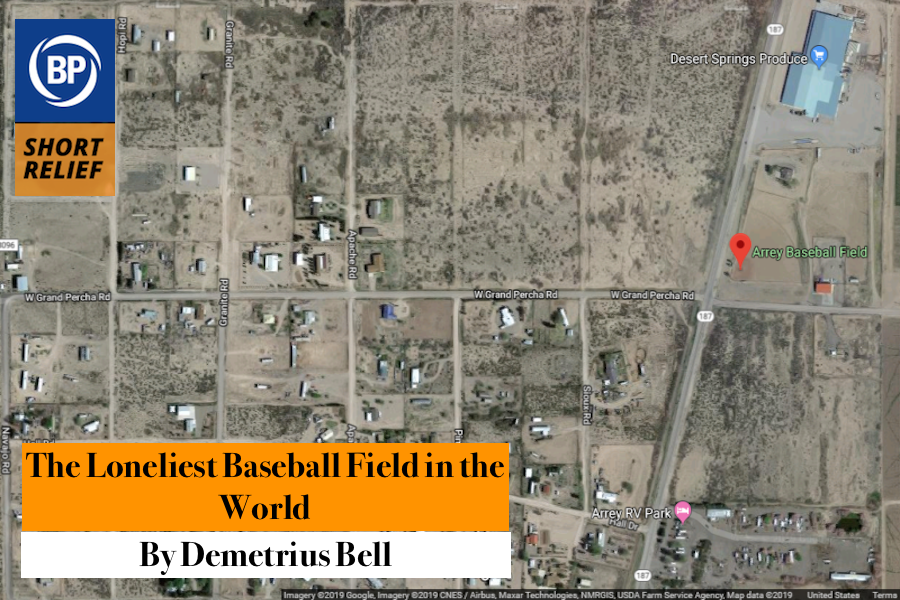 On the northwestern corner of an intersection where New Mexico State Road 187 splits West Grand Percha Road into East Grand Percha road, there is what appears to be what’s left of a baseball field. This skeleton of a baseball field is located on the Northwest side of a town in New Mexico known as Arrey. Arrey is a bit south from Truth or Consequences, New Mexico, which is a town that’s only famous for its name and being the fictional hometown of one of the most infamous professional wrestlers to ever walk the face of the Earth.

The 2010 U.S. census says that Arrey’s population is at 232, and apparently that was enough to get enough people in baseball uniforms and on the field in this tiny city. This little town in New Mexico may not have a lot of stuff to get into, but it had a diamond at one point and I can only imagine what that was like when it was actually functioning. It looks like if you were a kid growing up in that particular part of Arrey then you only had a couple of options when it came to having fun outdoors: You either kicked a can down the road until you ended up at Desert Springs Produce or you took a ball and a bat over to the diamond and started peppering balls around.

In the interest of transparency, I enjoy just messing around on Google Maps and I enjoy getting lost from time to time using the Street View feature. It’s a wonderful way to eat up any amount of time ranging from a couple of minutes to a few hours, and it’s also the world’s cheapest vacation if your imagination is strong enough. However, on this occasion I had a mission where I was looking for what appeared to be the most desolate place where you could find a baseball diamond in the good old USA. I think that this particular ballpark in Arrey, New Mexico fits the bill.

To paraphrase a line from Rust Cohle, the baseball field in Arrey is like someone’s memory of a baseball field. I wonder if there was a time where it actually had green grass and there were actually seats behind home plate or separately placed on each side of the diamond. Either way, there’s nothing to fall back on since I don’t think that anybody really liked the place enough to take photos of it while it was in whatever prime it had. All we have to go on is a review that declares that Arrey Baseball Field was a ”good place.” We’ll just have to take your word on that one, dude. 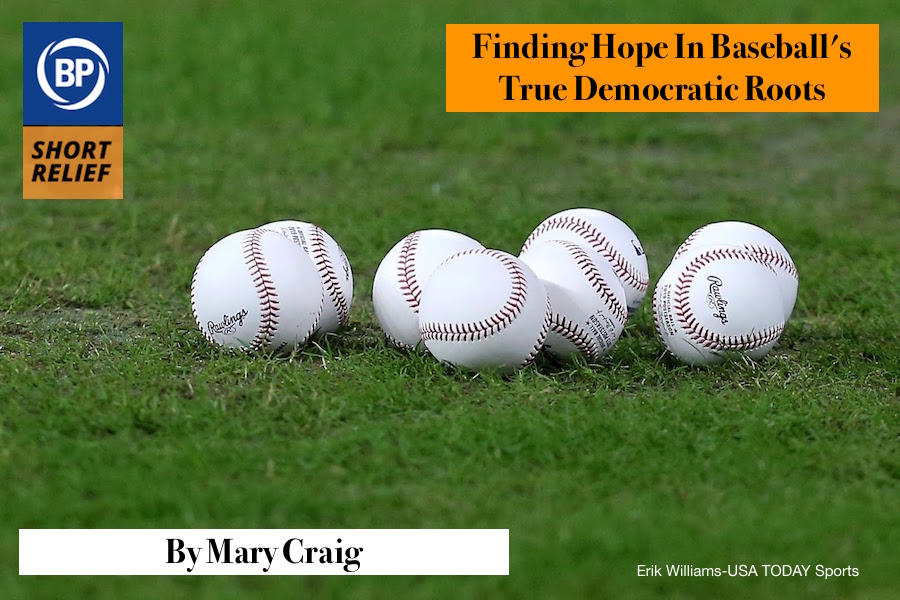 Since the professionalization of baseball, many prominent American figures from politicians to authors have impressed upon it a democratic spirit, arguing that it helps reinforce the principles of the Constitution that the Founders have espoused, namely duty, honor, and liberty. For instance, Walt Whitman claimed that it was the Constitution in another form, while Thomas Wentworth Higginson declared that no aspect of society was more congenial to the country’s national character than was baseball. It was viewed as a sport in which everyone could participate, from professionals in stadiums to children in town squares, and through which the mores and ethics of the country as a whole could be disseminated through its people. Baseball, then, was deemed not only great but also good.

At the same time, though, as this democratic character was thrust upon the sport, many of the nation’s citizens were turned away in droves. Black men were banned from professional baseball in 1887, and other men of color faced similar, though informal, discrimination. Meanwhile women of all ethnicities were discouraged from playing even at the most recreational levels. While baseball was publicly touted as a uniquely democratic and egalitarian force in society, it was so only in name. In reality, the prestige of playing was reserved for the few, and even they were prey to the antidemocratic presence of the country’s elite.

But despite all of the roadblocks placed in front of them and doors slammed in their faces, those who wanted to play baseball did just that. In the very same decade that saw the professionalization of baseball lead to boundless racism, sexism, and unfreedom, the first all-Black women’s teams were created in the streets of Philadelphia. In 1885, the Cuban Giants became the first black male professional team, and the New York Gothams came shortly after. Their success was limited and the structural and social racism they encountered was relentless. But in spite of everything they existed. They played baseball because they wanted to play it, because on some level they saw the good in it, the way that it could potentially demonstrate their equality to the white man.

The great democratic force within baseball came not from the mouths of its white poets, politicians, and priests. Rather, it came from the lowest in society, the castoffs, the people who had much to lose from their attempts and even more to gain if they were successful. It is these people, not the team owners, not the white farmers from the midwest, who give baseball any democratic character it possesses. It is these people who have had to fight tirelessly for every single right they possess, for every single bit of equality denied to them first by the Constitution and then by baseball, who represent baseball at is very best.

In the face of the news that MLB might eliminate 42 minor league teams, it is this bit of baseball history that gives me hope. It might seem like the death of professional baseball is drawing nearer with each passing day, but every time I read about the Dolly Vardens or the Cuban Giants or the hundreds of known and unknown figures of the 1880s, I am reminded that its professionalization is neither the beginning nor the end of baseball, and if we stand firm with those who represent its true democratic nature, we just might have a chance at something better.