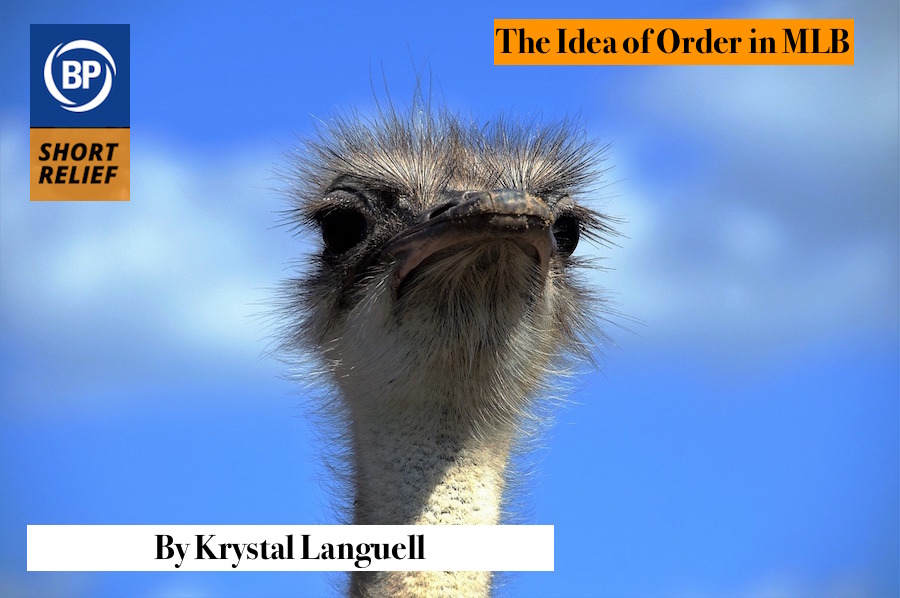 Why, when we watched the position players
pitch, did the wind change direction and begin
blowing in? Did the tides reverse and Mercury
go retrograde? It appears to reverse, only now
four hours have passed and time has slowed.
Miggy Montero wincing.

He felt the unmaking
of the roster, it was his knuckleball that cut the
dirt in front of home plate. But they swung anyhow.
Here is your answer: it was the sound that gave
away the secrets of the trade. More than wind or
rain, the wave of sound through tin can, through
rope, through secret code under everybody’s nose
as they selfied and drank and got hit by foul balls
drove back the wind to flap the flags in.

What happened to the familiar elements? Since
home run balls splash into the sea or carom off
the foul pole, it’s funny, too, to see men stand in
spots they typically don’t. Comedy is subverted
expectations so we laugh at position players
and scratch our heads (sometimes) at the shift,
thinking this better be as good as a dad catching
a foul in his beer without waking the baby. 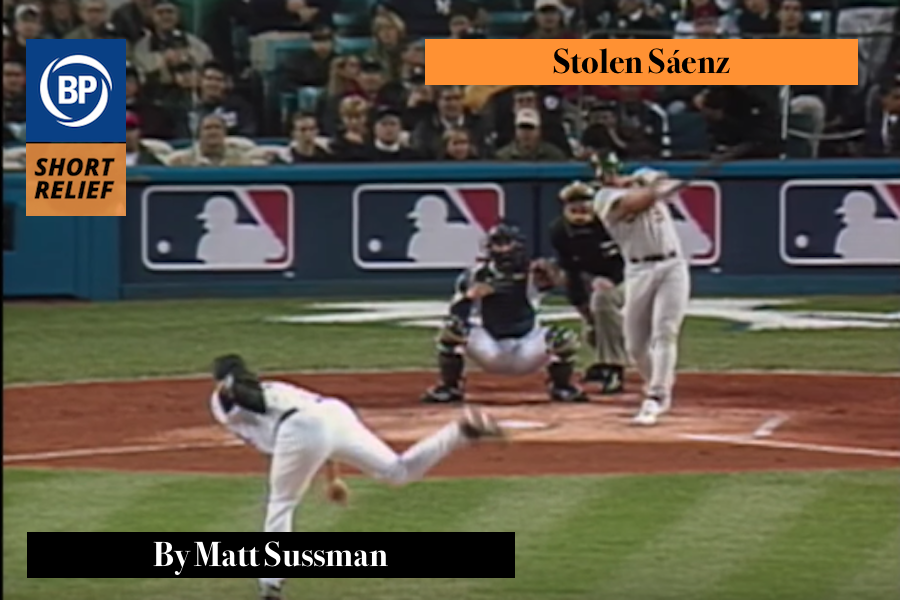 You’ve seen it in the news this week, and it’s a bigger deal than you think. It’s happened three times in recorded baseball history.

June 11, 1999: Olmedo Sáenz stole second off Carlos Pérez and Todd Hundley against the Dodgers, which led to a six run inning.

Ripple effect: Pérez, the next week, would do this:

May 2, 2000: Sáenz stole second off Jerry Spradlin and Brian Johnson of the Royals with two outs in the eighth inning of a tie game. He would not score, and the A’s would lose in extra innings.

Ripple effect: Johnson was released at the end of June, Spradlin about a month after that.

April 10, 2002: Against the Rangers, Sáenz stole a base off Dave Burba and Iván Rodríguez, possibly assisted by Greg Myers standing on third with two outs. The game was tied in the fourth inning at the time, and the A’s would lose 4-2.

Ripple effect: Burba was released in midseason. Rodríguez would go on to a little thing called the Hall of Fame.

What I’m gathering here is that Sáenz stealing didn’t happen very often, but when it did, it usually wasn’t fair to those he did it against, except the generational talents. I’d demand that Sáenz stop stealing bases, but he retired in 2005, so we should be good. 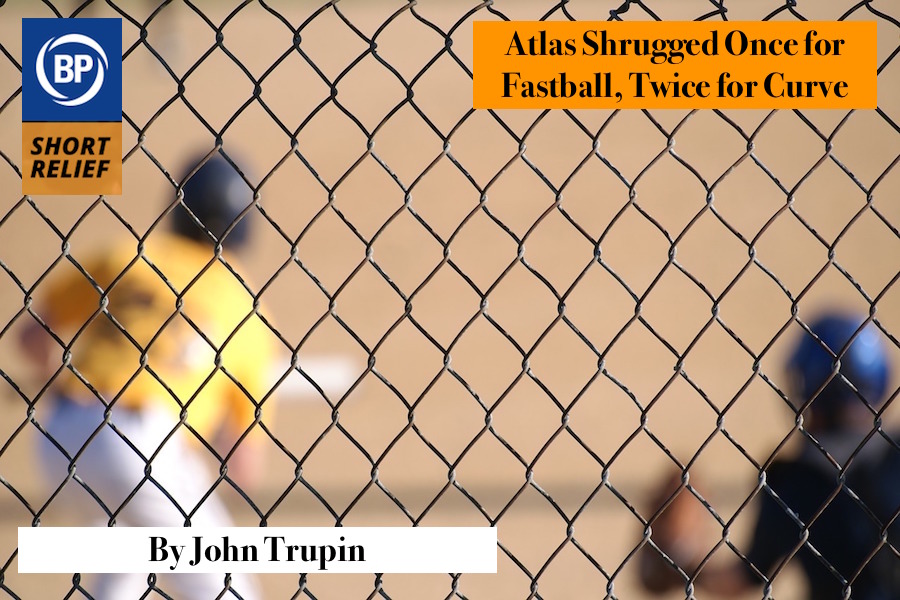 When you’re a kid, sign-stealing feels incredible. Baseball, up until around high school age, is often as much a struggle between the player and the sport as it is directly between two teams. Uncoordinated limbs, underdeveloped emotional faculties, and short attention spans make for clumsy rivalries. But sign-stealing, whether instigated by a coach or a particularly savvy youth, introduces the game in a different specter. It is a puzzle, one to be fixated upon, at the exclusion of all else, because the rewards are immense. So are the consequences.

While the Astros have made themselves an easy villain over the past few years, the sign stealing scandal has pushed them into the realm of actual possible repercussions. Stealing signs sparks a debate among fans that does not fall along neat party lines. We end up asking questions without firm answers, like “Is this actually cheating?” and “Would you be this upset if your team did it?” and “How much of a difference does it actually make?”

In youth sports, for as much as kids may live or die with the matchup at hand, the stakes do not approach that of a big league game on behalf of a multi-billion dollar industry. When the bench instructed my 12-year-old self “First name means fastball, last name means off-speed,” it spelled doom for the poor pitcher we faced that day, but little more. Yet when small-scale innovations become institutionalized, their success comes at the expense of their once-fellow minnows.

This Astros thing is bad!!! Guys lost jobs, got sent down, missed service time bc of how they were hit in HOU. Does anyone really think they only did this in 17? #getreal

Kevin Gausman was not hyperbolic with the consequences at stake. The guys at the end of the bench whose careers are most vulnerable to momentary fluctuations in performance become more exposed than ever. The Wade LeBlancs and Chris Flexens of the world may not have the ability to cling to a MLB roster regardless, but tearing the element of surprise away from most pitchers who cap out at 91-92 mph is a culling blow. While it matters in every case, for each Yu Darvish impacted,there are dozens of less exceptional players pushed back to the minors.

That is the nature of sports, in a sense. It’s why many of us relish it – presented as something as close to a true meritocracy as the world provides. But as was written in these pages this very week, unbridled win-at-all-costs atmospheres breed consolidation and risk-aversion. The distinction between sign stealing as a skill and sign stealing as a technology-aided system becomes unavoidable. The micro vs. the macro becomes the separation between a group of entities playing by one set of rules and one with a structure designed to capitalize on that naivete. Before claiming “everyone does it”, or lamenting our own teams failing to take this advantage first, I hope we at least consider whose shoulders are trod on to reach these heights. 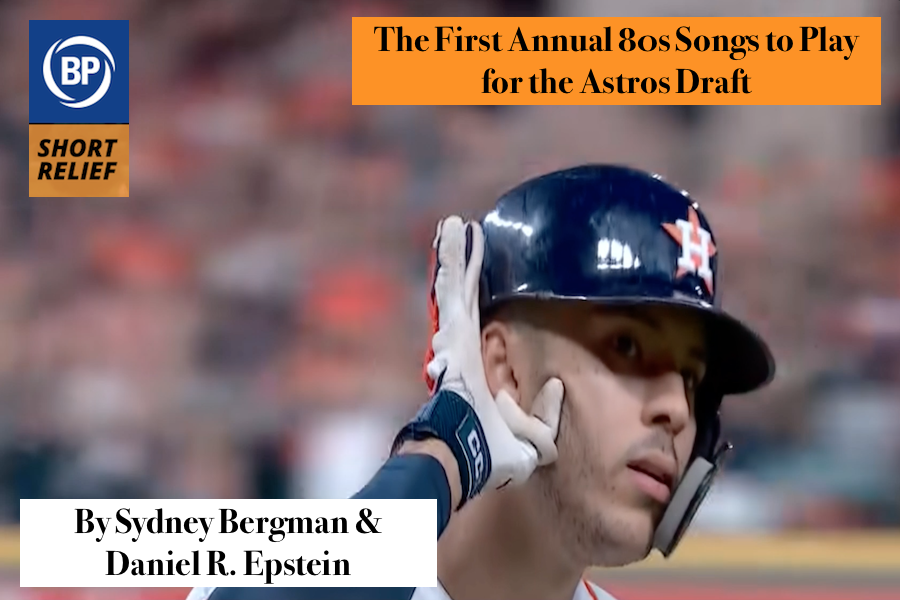 In case you’re not up to date on MLB Teams Behaving Badly, Ken Rosenthal and Evan Drellich of The Athletic revealed that the Astros were stealing signs electronically in 2017. However, the means of communicating those signs to the batter were more low-tech:

The expected pitch would be communicated via a loud noise — specifically, banging on a trash can.

Fortunately, the authors of this piece have a simple solution to counteract any trash can banging malfeasance:

2. There are SO many 80s songs that would work here. Freeze Frame. Glory Days. Basically every song used that trashy, electronic snare drum. https://t.co/IEhvD5Sqxo

This line of thinking inevitably leads in one direction: we’re drafting 80s songs, specifically songs that use a trashy (get it?) electronic snare drum or other similar sounds, to blast while the Astros are batting.

We’ll pick three songs each, with Sydney leading off. The winner is nobody; this is about justice, NOT fun and games!

If we’re making this list specifically so that opposing teams can (and should!) troll the Astros, this seems like a good start. Who doesn’t want to command the Astros to uh … bang bang at this point?

Daniel: The guy’s voice in that song is so bizarre and unmusical. I don’t understand how someone decided to let him near a recording studio.

Sydney: First of all, how dare you?!? (Seriously Daniel, Fred Schneider has the voice of the funnest angel. -Ed.)

This is the perfect baseball 80s song, and I will hear no arguments to the contrary. The video begins and ends with Bruce actually pitching (I’m from Jersey so he and I are on a first name basis) (Probably?). Plus there’s a Craig Nettles reference at the end, and it’s Padres Nettles, which is super 80s.

Sydney: Imagine fooling a hitter with a pitch. Imagine that being part of the game. Whoever thought that that would be something people wanted to watch? Recreationally? For fun?

Sydney: “baseball” – little ‘b’ for the sport itself takes you by the heart and won’t let go. That’s why we watch, for that feeling that sits in your chest that says, yeah, this is a great way to pass a cloudless summer afternoon. Baseball, big “B,” will break your heart, over and over and over. No matter how pretty a dazzling curveball or a lethal changeup – big “B” Baseball will tell you who it is, and what it values. And we’re all stuck trying to look for that first thing, that good transcendental escapist feeling, in the second, a system that ultimately exploits that search. It’s a pity MLB can’t seem to understand that.

Daniel: I mean, what about “transcendent escapism” isn’t light and fun?

Yankees fans wish they could party like it’s 1999! Get it?

Prince was great at a lot of stuff, but not math apparently. “Two thousand zero zero” is not how we say 2000. We actually said “Y2K,” because some kind of distortion of roman numerals was cool back then, I guess. 2.000/0/0 isn’t exactly a slash line either, but we’re committing crimes against math, so why not? I bet 80s Wade Boggs could’ve batted 2.000 if Oil Can Boyd had banged on a trash can on offspeed pitches.

SYDNEY
“I against I”, Bad Brains

🎵In the quest for the test to fulfill an achievement
Everybody’s always going to pursue themselves
When the fact of the matter is they just don’t care
To extend a helping hand to anyone else
So tell me uh-why, did you have to lie?🎵

I admit this is a genre departure from other songs we’ve included, but it’s a) from the 80s and b) punk from DC, and I feel like at this point, with the Astros playing a three-game set over 4th of July weekend in DC in 2020, they should be treated to some of the best (loudest) music DC has to offer. Bang over this, garbage men.

Daniel: Love the song and 80s punk in general, but it’s less than three minutes long! We’ll have to play it on repeat a few hundred times to get through a nine inning game.

🎵Candy on the beach, there’s nothing better
But I like candy when it’s wrapped in a sweater🎵

This is a heavily percussive song from start to finish. No way can a batter hear a trash can banging through that beat. It wouldn’t surprise me if the drummer actually was banging a trash can somewhere on the track.

Yes, I know the song was originally written in the 60s, but the Bow Wow Wow version (seriously awful band name) from 1982 was the biggest hit.

SYDNEY
I also consulted with experts (Nats Twitter) about this, and have put their suggestions into the following playlist for the reference any ballpark organists looking for some inspiration.

You need to be logged in to comment. Login or Subscribe
Thomas Battiato
My first choice: "Bang on the Drum All Day" - Todd Rundgren, 1983.
Reply to Thomas
Mark Mason
Surprised that BP is not claiming credit where it is due, since the Astros exec who kicked the whole thing off, Kevin Goldstein, is a BP alum.
Reply to Mark