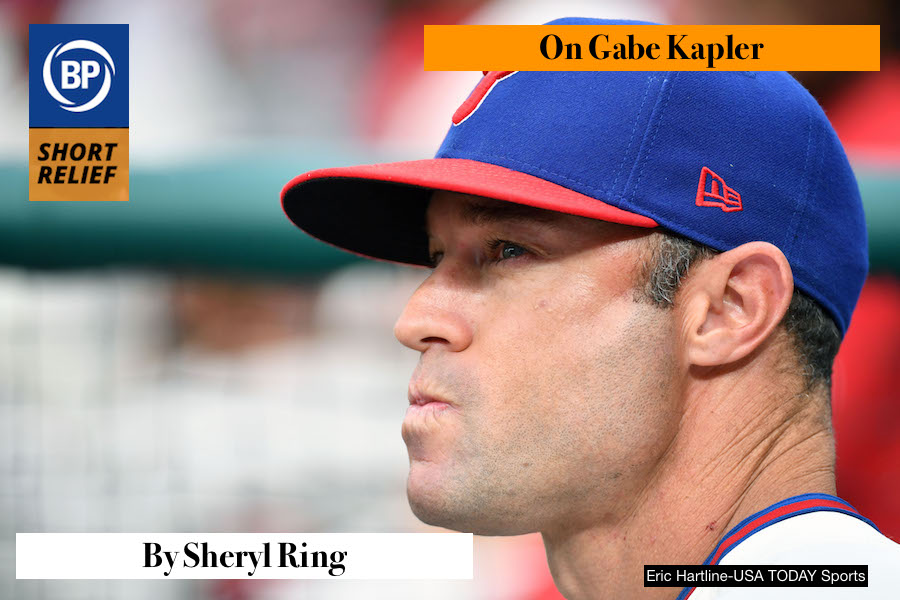 Apathy, Jeanne Kalogridis once wrote, is indeed the greatest evil, for indifference is more dangerous even than honest hate. She was correct, of course; hate implies care, that one takes care of what the object of that hate thinks and feels. Hate implies a desire to hurt, which necessarily implies that the hurt have feelings to be hurt.

Not so with apathy. With apathy, there are no feelings acknowledged. Hurt may be unintentional, but in the same sense that the death of an insect beneath your foot is unintentional. The pain is felt by the harmed, but no one is the wiser. The world keeps spinning. Pain unrecorded, unseen, unregarded is not less painful, yet what is pain if no one ever knows it is felt? The danger of apathy is that it assumes the unknown to be simply absent.

Enter the San Francisco Giants, who yesterday officially announced Gabe Kapler as their new manager. Kapler, of course, used to helm the Phillies. But before then, when he worked for the Los Angeles Dodgers, he swept under the rug evidence of assault against women by Dodgers minor leaguers Alex Verdugo, James Baldwin, Luis Rodriguez, and Julio Urías, all part of his evident belief that sexual assault and intimate partner violence are learning experiences for men, rather than crimes largely perpetrated against women and non-men. That’s not idle speculation, either; on Kapler’s foundation website, he calls women and children “feeble,” yet paradoxically argues that “Children too should be part of the enforcement against domestic violence.” To Kapler, domestic violence is purely a problem of heterosexual couples, and calls victims of intimate partner violence “pitiful.”

In other words, Gabe Kapler thinks straight women are “feeble” and “pitiful,” and intimate partner violence doesn’t exist outside of heterosexual marriage. It’s no wonder, therefore, that he saw fit to cover up multiple instances of sexual assault whilst with the Dodgers. He was apathetic. To him, those victims don’t exist. To Gabe Kapler, I, as a queer woman who has experienced abuse at the hands of my parents, also don’t exist. It’s that apathy that the Giants embraced by hiring Kapler. And of course the team didn’t stop to consider the consequences or ramifications of the hire, because Farhan Zaidi, who also worked for the Dodgers during Kapler’s time there, was no more attentive to these issues than Kapler. We don’t know what we can’t see, and Kapler and Zaidi don’t see quite a lot. Their error is in assuming that what they don’t see doesn’t exist.

That’s the real tragedy here. Two apparently cisgender, heterosexual men who will never know what it’s like to live as a non-man or queer person, deciding they know that survivors of intimate partner violence are nothing more than feeble, pitiable nothings. Once again, they’re in a position to do untold harm to survivors by perpetrating that myth. They’ll never know that, though. They don’t know to ask how.

And they don’t want to find out. 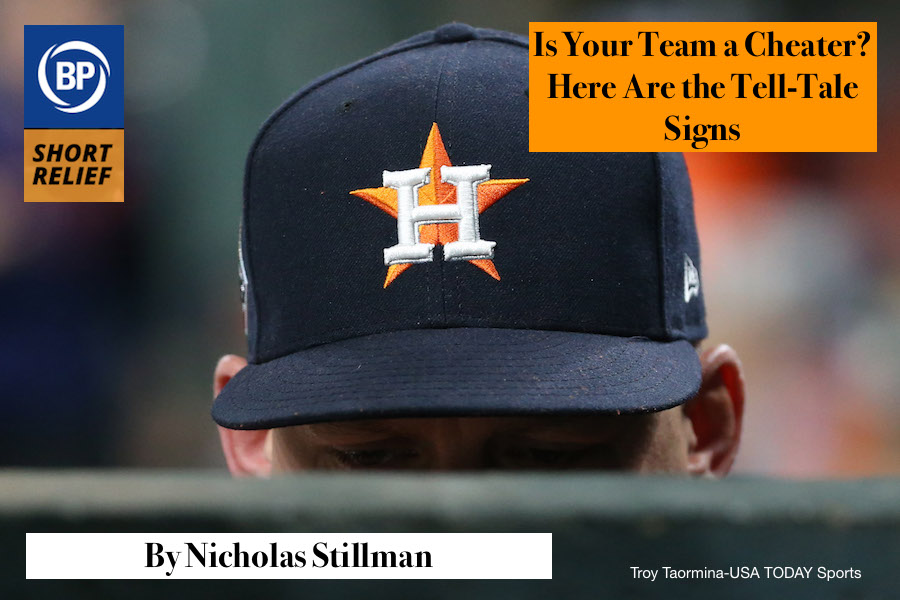 When I was in community college I cheated on a test for the first and only time in my life. It was a take-home midterm, open book, multiple choice but with strict instructions that we not use the internet to answer any questions. On top of the test, in bold font, were the words HONOR SYSTEM. As Geology was, in my opinion, boring, and my girlfriend was, in my opinion, down to make out, I decided that spending an evening with her was infinitely more pressing than crouching over a textbook identifying strata. So I googled every answer, allowing myself a few guesses — as everyone who has cheated on a test knows to do — and received an unsuspicious but still surprising A-. I assumed everyone cheated on the test, which assuaged some guilt, yet still I never told anyone this until just now.

That’s not an interesting story, I know. Because there were no consequences for me (yet!) and, let’s be honest, it didn’t really feel like cheating (a take-home multiple choice midterm? Really?) So I have trouble feeling as bad about it as I should.

The Houston Astros have entered the news cycle once again with their own cheating scandal. Mike Fiers and seemingly everyone in the league has agreed that the Astros are and were stealing signs using video cameras pointed at the crotches of opposing catchers and relaying the amount of fingers they press against their groins by banging on trash cans or flashing lights or simulating the various and precise gyrations of the red-capped manakin’s mating dance.

This is against the rules, of course. You can’t use technology to gain an advantage. But it all seems so silly. Stealing signs is a profoundly silly way to cheat, as is using sings in the first place. How fragile and tenuous is your secret code when the person you are trying to hide it from is standing over you, inches away, and need only glance between your legs at the right moment in order to crack it?

What the Astros have done is cheating, it is wrong, and it casts a shadow over everything they have accomplished. But what this scandal also reveals is a weakness. A flaw in the way players communicate, an area of the game as vulnerable as the crotches the Astros so carefully study. Why is it that when players are on the mound they cover their lips to disguise such banal phrases as, “My bad,” but brazenly display their fingers against their junk with unbreakable codes like “1 = fastball”? There is an opportunity here to reconsider an area of the game we haven’t considered in a long time.

I’m not defending the Astros, not intentionally at least (on the list of Astro offenses to be upset about this ranks low on my list), but we’ve created a take-home Geology midterm with HONOR SYSTEM written on the top. The technology is there, the cameras are there, the signs breathtakingly simple to decipher, all we needed was someone to want to make out bad enough. The Astros really really really wanted to make out, they wanted to make out more, perhaps, than any other team. But this is only their scandal because they were caught and no other teams have been yet.

We need to punish the one who was caught and give the playing field the Tal’s Hill treatment. Yet let’s also consider how we move forward so that we’re not simply increasing the font on the HONOR CODE. I mean — are we sure we have to use fingers? 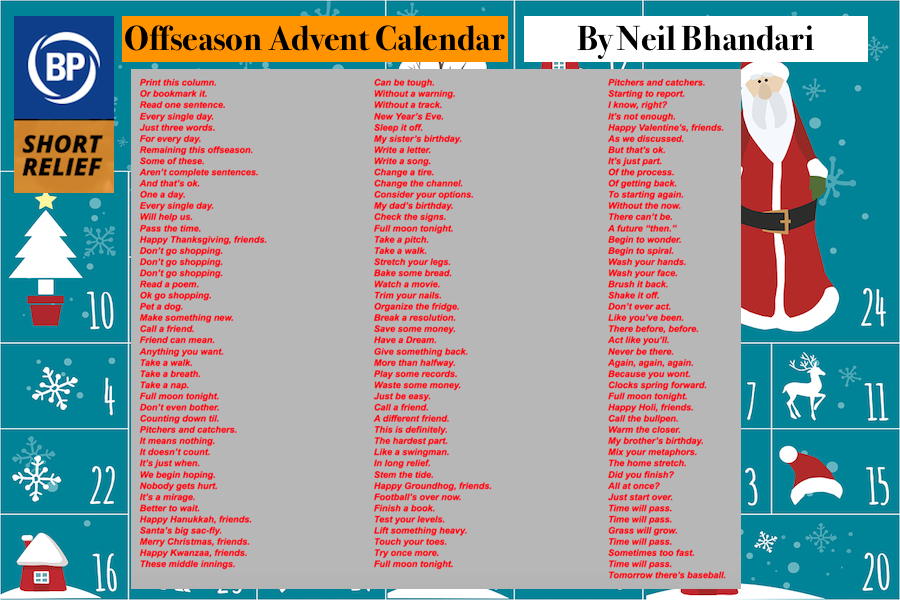 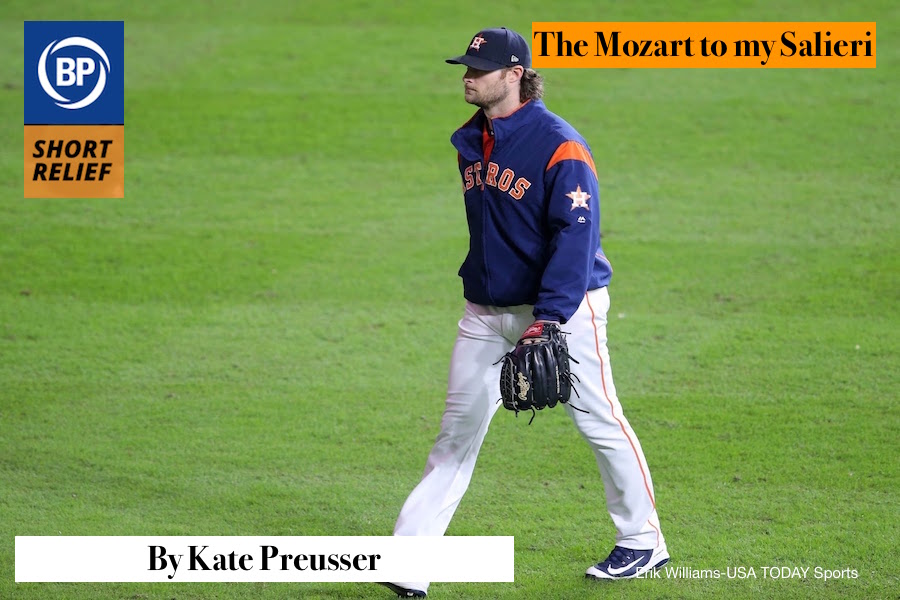 It is well-established in educational circles that learners should be offered “process praise” rather than “person praise”; saying “You’re so smart!” to a child sets them up for a lifetime of achievement for achievement’s sake, that early flood of endorphins from positive recognition creating a need to earn the highest score, win the blue ribbon, take home the trophy — extrinsic motivations that may or may not recognize the hard work and effort a learner puts in, or creates external competition rather than encouraging someone to compete with themselves, creating a growth mindset. It’s not hard to say “Wow, you worked hard!” or “Wow, you found the best way to do that!” instead of “Wow, you’re so smart!” or “Wow, you’re so talented!” and yet how often do we fall into the trap of dubbing a child who shows promise at something a “natural-born actress/artist/athlete/scholar,” setting them up for a lifetime of believing that their talent is, and always will be, enough?

There’s a reason memes about the gifted child who turns into a damaged, disappointed, praise-seeking adult are so popular: so many of us were told, at varying times, by well-meaning teachers, caregivers, and friends that we really had a knack for something before being forced to admit, in the unforgiving light of late adolescence, where we stack up. The road to adulthood is littered with dented trophies and tattered ribbons.

And even if you are the best, like objectively one of the best best, like top 1% of your field, like top .01% of your field, sometimes there’s only one tenure-track job, one spot in the band, one restaurant that can be supported in this one stoplight town. One trophy. You can be Salieri, and your rotation mate can be Mozart.

So, Gerrit Cole, if it’s not too late: wow, you had the highest WAR in baseball you were a very helpful teammate this year! You had the highest strikeout rate in baseball You found the best way to throw your pitches so they all looked exactly like each other and made batters chase after them like they were trying to swat a fly with a soggy baguette. Your curveball is a gift flown to you in a flaming chariot blasting death metal by the hellhounds of Satan You worked so hard on your curveball this year and it shows! I would cut off multiple important fingers to have you throw baseballs for my team Stay sweet, have a great summer!