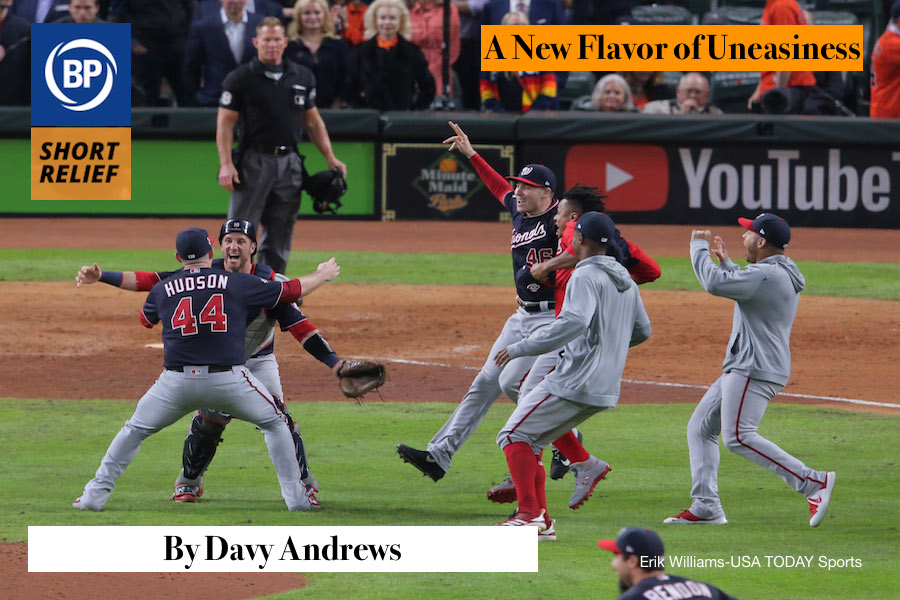 To an awkward person, discovering an entirely new flavor of uneasiness can feel almost like an accomplishment. Maybe — to pick one completely random, made up example that totally doesn’t affect me personally — maybe you move to New York and learn that having a conversation while on the subway floods you with so much anxiety that you avoid riding the train with anyone, even your closest friends. Rather than feeling bad about this, you can choose to view it with a kind of detached wonder. Who would have guessed that someone could be damaged in such a strange, specific way? What a marvel I am, the fictional, non-Davy person in this example.

The uneasiness that rose inside me during Game Seven of the World Series was hard to identify. It wasn’t until the Nationals added two insurance runs in the top of the ninth that I figured it out: I’m not comfortable rooting for a champion.

A quick scan of The Washington Post’s Game Seven coverage yields descriptions of Washingtonians that include, “eternally skeptical,” “used to suffering and heartbreak,” “trained by repeated October disappointment,” “losing and disappointment and heartbreak had been the norm”, etc. These are my people.

Not a single player on the World Series roster had won a World Series. Not one. These are my people.

It is rewarding to care deeply, even if the recipient of that care is bound to disappoint you. There’s a purity there. My desire for the Nationals to win was never dependent on the Nationals winning. How could it be, when they’d never won? I was rooting for the unprecedented, for the unbelievable. Of course I’m uneasy with the idea that next season I’ll be rooting for the status quo, for stagnation, for tyranny.

If, like me, you’ve read everything about this playoff run that you can get your hands on, one phrase has likely jumped out at you. The Nationals spent the month of October staving off elimination. That is, they were beating it away with a stick. When David approached Goliath with only a staff and a sling, “the Philistine said unto David, Am I a dog, that thou comest to me with staves?” David uses a walking stick to stay upright; Goliath assumes any stick is for beating a dog. I would prefer not to be on his side.

Don’t get me wrong. I’m glad the Nationals won. I keep watching replays of the final out, covering the bottom half of my face with my hands, which apparently is what I do when overwhelmed with joy and relief and disbelief. But it’s something I’ll have to figure out. I knew one way of being a fan and I’ll need to learn another. In the meantime, I can at least rest easy knowing that these changes are sure to bring all kinds of new and exciting reasons to feel uneasy. 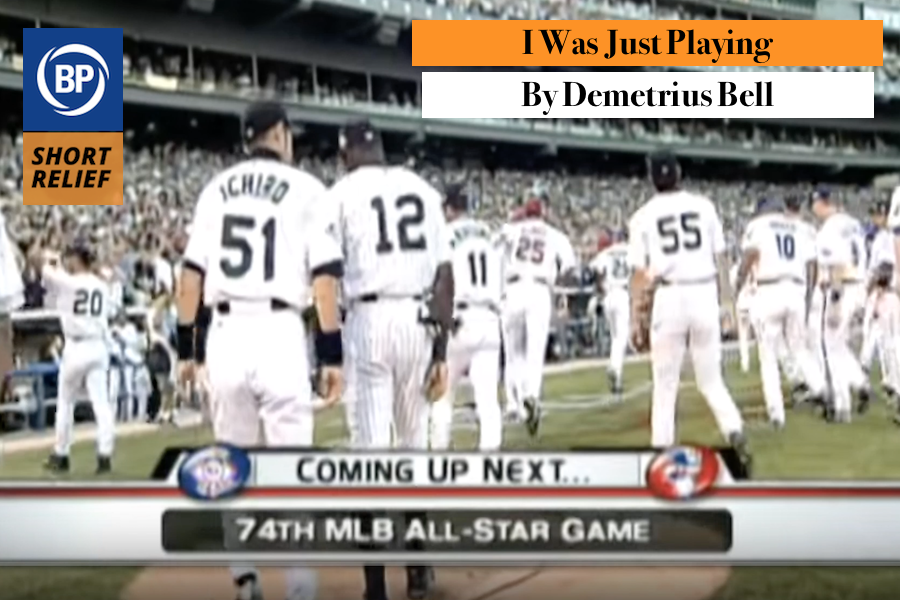 The end of the baseball season is always bittersweet if you’re the type of fan who has turned watching baseball into a habit from spring training until the end of the World Series. I fall firmly into that category. I’m either listening to baseball on the radio or planted firmly in front of a television for over half of the year until it’s just all over in the blink of an eye. Even when it’s a season like this where we knew exactly when baseball was going to end due to the World Series going seven games, it’s always jarring to experience the end of the season.

It feels like you’re being forced to drop a habit cold turkey. You go from having a comforting habit that you stick to on an almost nightly basis to having it taken from you in a flash. You’d think you’d be grateful to have it end if you’re rooting for a losing team. I can’t even say that because even when my favorite team was routinely bad, I used to go three weeks at the most before I was going around on YouTube looking for classic baseball clips because I missed watching games that much. Even when your favorite team spends most of the calendar year working on your sanity, it’s still very to miss them and baseball in general once it’s all over.

It also goes hand-in-hand with the coldest part of the year extending its icy grip across most of the country. I’m one of those weirdos who actually likes cold weather, but even I’ll make the concession that the oppressive summer heat is worth it just so you can look forward to a steam summer night with your nine best friends on a baseball diamond. The 90 degree days are a cinch to ensure if you know that you’re going to get nine innings of intrigue to end those balmy days.

The point of all this is that even though certain events this season made me long for the end of the season to finally arrive, I was just playing. I’m never really serious about that, which is why I actually found myself scrambling to see if this was a WBC year. At the very least, that makes the long offseason just a tiny bit shorter before we can get back to this habit that we all love. Until then, me and people like me have to figure out how to survive. Guess it’s back to YouTube to scour that website for some random clip of a game from 2003. We have to take whatever we can get at this point. 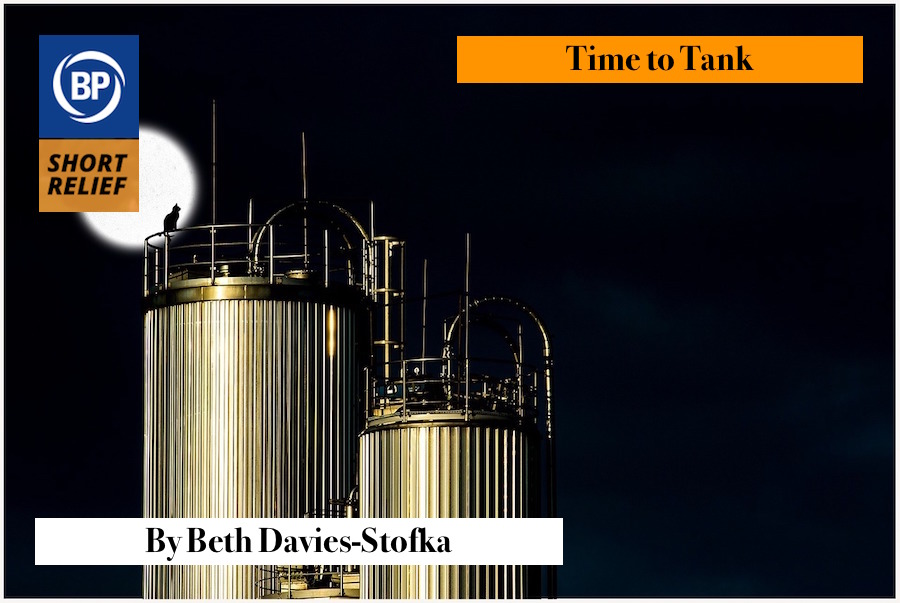 In every offseason, I tank. It’s epic. It’s epic like the 2012 Cubs (61-101) or the 2013 Astros (51-111). But unlike those champions-in-waiting, I don’t tank by design. I don’t do it to save cash or rebuild. I simply struggle, without success, to summon the effort I need to win. I don’t seem to have the will. Why not? I had a pretty good 2019 season. I can’t fault myself for writing regularly, some of it pretty good, some of it noticed. But I can’t dream big like a World Series winner should.

The writer’s equivalent of a World Series ring is something pretty big. It’s even bigger than a Pulitzer Prize. I’m not dissing the Pulitzer because it’s a huge deal. It’s the writer’s Gold Glove or Silver Slugger, given to deserving players who proudly receive them. Absolutely, yes, I want a Pulitzer. It’s just not the equivalent of the World Series. I want something just as exclusive, and just as hard to earn. The Genius Grant. I want to be a MacArthur Fellow. As the World Series is the greatest career achievement for a baseball player, the Genius Grant is the greatest achievement for the writer. Nothing else will do.

It’s all about the dream. From an early age, major leaguers can see themselves spilling into the field, hugging, laughing, and crying. They can see themselves hoisting the trophy and kissing it, leaping and jumping in wild joy and spraying each other with champagne. From the time they were little kids, they could see themselves as World Series heroes; robbing a home run to make the final out, throwing the final strike—a backwards K no less, hitting the walk-off before flying on winged feet into the arms of jubilant teammates. They’ve all dreamed it. They can see it. It’s all so clear.

Not one of them sits around thinking, “I’m such a loser. I’m the goat.” If they do, then they have to shake it off. That, or go home. But in my fog, I see nothing and believe even less. I’m the loser, the goat — not the GOAT. Even though I might have the stuff to take aim at the Genius Grant, I don’t have the will to spend years working for it because I can’t see it. I can’t see the top of the mountain that I have to climb. It’s lost in fog, rising from the shorter days, the busy holiday schedule, the cold. Most of it rising from depression, the silent enemy, the best friend, the faithful companion.

I might clear the fog this year, but it will take time. A few months at least. And by then, I will have forgotten my dreams. Lost in the lustrous return of the stars, the glorious Opening Day.