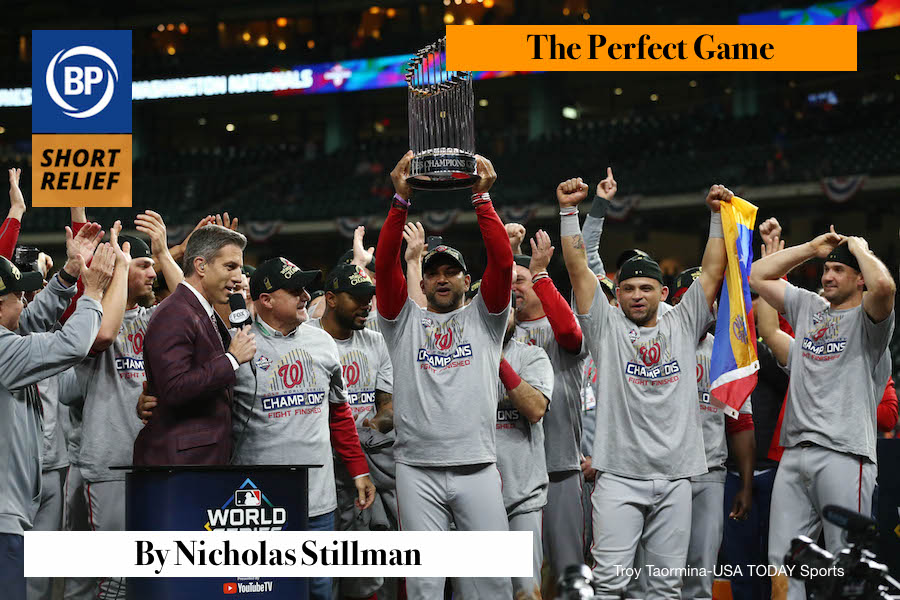 As a kid I believed life was a battle between good and evil. There were cops and robbers, Fellowships and Orcs, Steven Seagal and Steven Seagal’s enemies, Everyone Else and Tom Brady. The world was ordered into two oppositional forces and you always rooted for goodness, and goodness always won.

As you get older, the hems of good and evil start to fray. The orcs are only evil because they “inherently are,” the storm troopers are easily hated because they are faceless, the Patriots are — OK the Patriots are actually evil. But when you start to zoom in on real people you see the gaps. Cops aren’t always heroes, the team that I hate has players I love, the team I love has players I hate, your parents lie, you find your therapist has a tick where he bites his pen whenever he’s bored, your perfect marriage fails — the world isn’t a story.

But we are drawn to those stories of good and evil, just as we were as kids; it makes the world feel fair, it gives us justice. We cheer on the destruction of the Death Star without complicated feelings about the faceless men evaporating into stardust. Who feels bad for the mean Hawks at the end of Mighty Ducks? Which of us wept for Johnny “Sweep the Leg” Lawrence in The Karate Kid? Good wins, evil gets what’s coming to them.

Game Seven felt like just such an epic story: The Astros as The Best Team in Baseball who employ a domestic abuser, who defend him, who call out female reporters to this effect, who have repeatedly made themselves out to be villians, who march their organization forward into a cold future of technology in the pursuit of total victory, facing off in the final game against the longtime character actors of the postseason. The Nationals as the underdog, the aging team of second-class veterans, underrated stars, and young, charismatic rebels. The back of the VHS case was perfect, schlocky goodness.

The game itself managed to do what life so rarely does. After a hard fought battle against the Astros most relatable character, Zack Greinke (who was once ridiculed for existing as a human being in New York), the Good Guys were down two runs in the late innings. After the first home run was struck by an underappreciated star, the youngest player in baseball history, Juan Soto, at just nine years old, showed the patience of a preteen and walked to first. Up hobbled the child’s grandfather, Howie Kendrick, who at 87 years old sliced a perfect pitch down the right field line. As it arced, the stadium drew breath — could the oldest man to ever hold a bat really hit in his own great-grandchild? — then CLANG, the ball struck the Homophobic Brand’s foul pole, a victory for all. Later, as this kid’s film required little suspense, Juan Soto ripped a line drive off of Osuna, and Max Scherzer wept with maximum intensity as the credits rolled and a silly sing-a-long about a shark played.

The Good Guys won. The narrative reached its satisfying conclusion and, for a night, the world worked as we were always told it should, as we all want it to. Yet that isn’t quite right, is it? We can’t pretend to know that. We don’t know the secret lives of the players, the coaches, the front office. Tomorrow an article could unearth some scandal that would change the story we’ve been telling, greying our black and white understanding of this game.

But that’s OK. Sports are a safe place to think in absolutes. It’s fine for sports, for a moment, to let us cheer without conscience or consequence. The Good Guys won, the Bad Guys went home. The game was perfect, and, for a night, we all got to be kids again. (Except for Astros fans, who had to work the next day like adults.) 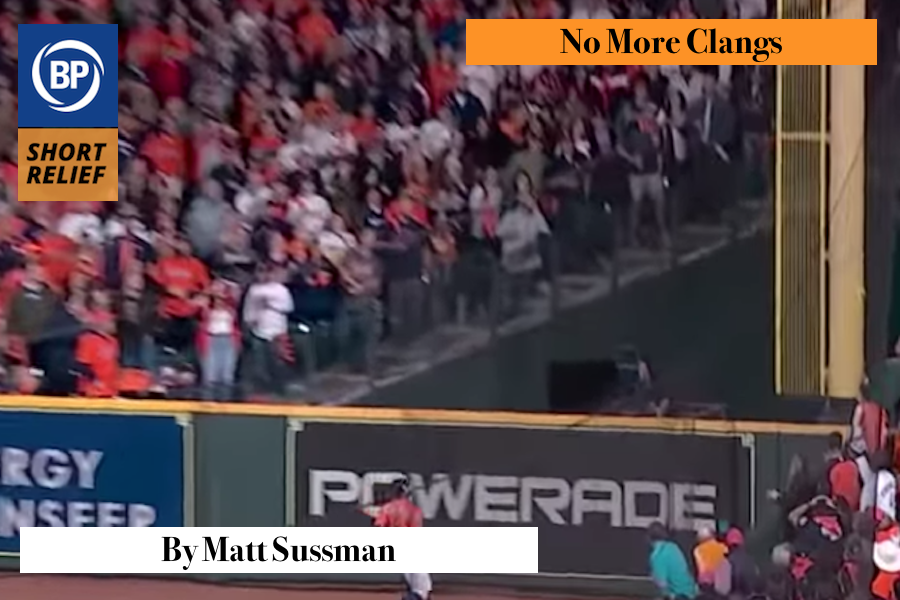 The sounds of the game. You know them all. Ball hitting glove. Bat hitting ball. Various humans with various emotions. All of them are considered canonical in the baseball universe. The one that does not fit are of the metallic variety.

…Clang? Are we being invaded?

Obviously there are many modern sounds of the game, mostly songs and sound effects being pumped in from speakers. And before I completely turn into a Rush rock ballad, it’s all well and accepted, except for probably the Game 7 clang, such as the one that emanated from Howie Kendrick’s go-ahead home run. It was thrilling yet still felt out of place.

A home run is one of the three true ones but caroming off the foul pole isn’t an expected outcome. The ricochet is jarring to everybody, even if its results made you happy. It feels like a mistake. Yet the pole is necessary for umpires to have secure jobs and fewer angry customers researching their favorite lunch spots.

Does it have to be steel? It looks like that’s the standard design. A 40’ foul pole will also run you about eight grand, if you were interested, which I was not until I learned it — and there is also a return policy. But perhaps there are other materials which could be used, producing different sounds. Mystery sounds. A styrofoam foul pole would delight basically everyone around it, except for those that would probably be struck by the styrofoam pole, but even then, it’s styrofoam.

What about sensors? Place ‘em all over the pole. that if struck produces a sound like Mario jumping on a Koopa shell, or someone yelling in pain. Obviously the sensors would need to be yellow. If you have access to enough money to build a stadium, you really should invest in trick foul poles. It’s going to be worth it a few times a year, especially if there are customized sounds. The Astros were one innovation away from Kendrick’s home run activating The Price is Right losing horn. 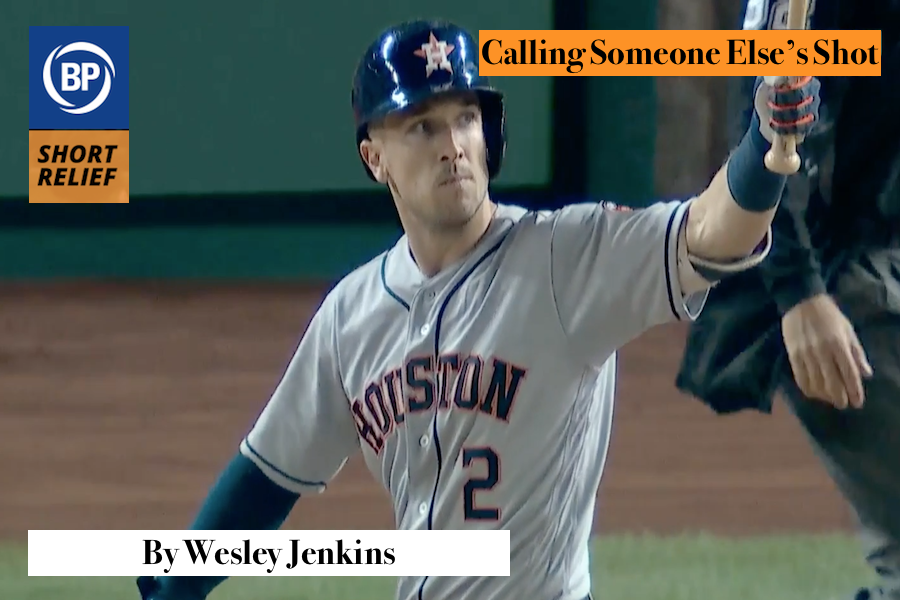 I almost said it aloud. He’s gonna do it, I thought to myself instead. He’s gonna launch one. And when Fernando Rodney’s first pitch sat belt high and just out over the plate, I really thought I was about to be proven right. Alas, Alex Bregman held his bat, and despite my feeling that still, It’s coming, I held my tongue.

The next pitch, of course, was a shoe-topper that Bregman uppercut into the heavens, a grand slam to put the Astros up 8-1. I was right, he did it, but no one else would ever know.

During the obligatory camera cuts of the dugout and the crowd while Bregman rounded the bases, we were treated to a four-act play. Justin Verlander and Gerrit Cole as idle spectators; Verlander and Cole as anticipatory revelers; Verlander still reveling as Cole puts it together; and then Verlander screaming, presumably, “I TOLD YOU SO” while Cole shrivels and dies inside.

You see, Verlander, like me, must have called Bregman’s shot. But Verlander, unlike me, told someone else. And judging by Cole’s reaction, must’ve put some money on it too.

If there is any greater feeling than calling someone else’s shot, in whatever sport it may be, I have yet to encounter it. Doing so makes that accomplishment, created solely by the athlete at the pinnacle of their ability, yours as well. “I told you so,” you — a couch goblin with chip dust on your shirt and feeling of restless atrophy in your leg muscles — tell your fellow couch goblins. “I helped make this happen,” you imply. “It was me. Me, me, me. Praise me.”

The first time I encountered a second-hand shot calling was the 2015 ALCS between the Royals and the Blue Jays. My college roommate and I drove to Kansas City for a weekend of barbeque but picked up last minute tickets to Game 1 too. He’s not much of a baseball fan or sports fan at all really, but for some momentary hysteria, in the fourth inning, with Salvador Pérez at the plate, he decided to say: “Watch this.” The next pitch Salvy poked over the left-center wall. Dumbstruck, I stared at him as he cackled, jumping and yelling “I told you so.”

Two years later, at an innocuous midseason Cardinals’ game, he did it again. The circumstances of that called shot are lost to memory, but his reputation as the home run whisperer, the tater clairvoyant, the man with a third eye for dingers was cemented. The previous title-holder, Babe Ruth, only called one shot after all.

Because I kept my inclinations of Bregman’s potential to myself, no one can verify that I too called someone else’s shot. I will forever be Gerrit Cole, never feeling Verlander’s boundless joy. I will stay a couch goblin, destined to know of home runs only after they break the outfield wall’s liminal plane.