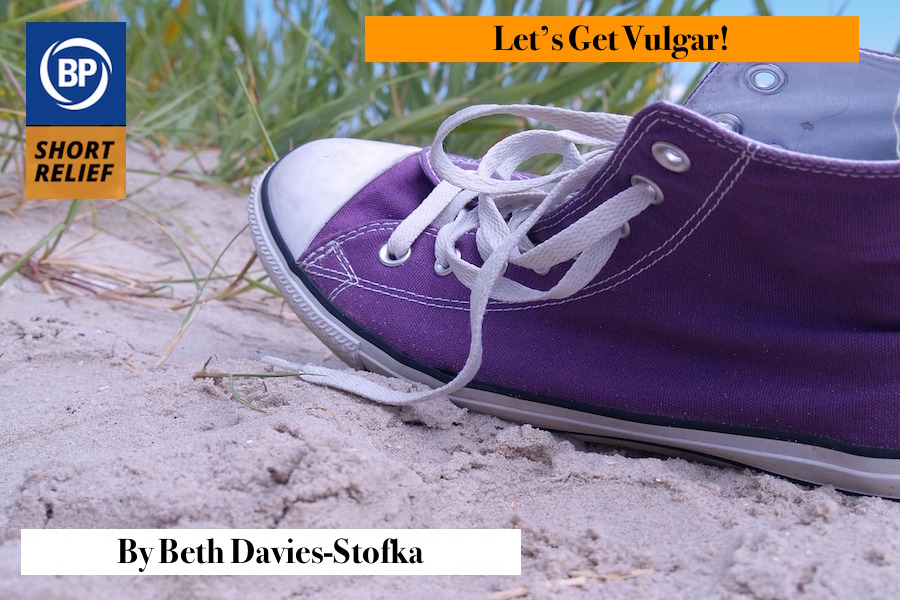 As a modern, educated woman, I don’t believe in jinxes. To believe in superstitious nonsense would damage my intellectual credibility; after all, everyone knows that the concept of the jinx rests on incorrect assumptions about cause and effect. In other words, lousy science. Everyone knows that we can’t attract bad luck, because there is no such thing. So why is it that I catch myself deleting sentences like, “I hope the Nats with tonight” from emails? Why is it that, right at the last moment, my hands detach from my enlightened mind, and delete at will? Obviously, something in me believes. I delete because I don’t want to jinx my team.

But I denounce myself for such silliness. I remind myself of a Roman intellectual. Cicero would say that my fear of jinxes stems from ignorance. I don’t understand the laws of nature, he would say. Only common people (vulgus), peasants (pagus), are capable of such ignorance. Looking that over, it’s pretty elitist and I’m not Cicero. So let’s get vulgar!

I will not jinx my team. I’m going to do the opposite. I’m going to flood them with good luck. I’m going to spend my days humming the Baby Shark anthem. Throughout the series, you will find me on the edge of my sofa hugging a stuffed baby shark, and watching the game through rose-colored glasses. (I hear they make the world look nice.) If the Nats get a single, I’ll baby shark it with my hand. A double will earn a mama shark, and a triple or a home run will earn the full treatment. Jaws. I will dance around the living room in home run joy. In the seventh inning stretch, I will hit the high notes of “Take On Me.” I will sing out “Dooooooooo” if Sean gets in the game. I have a lightsaber, and I will use it to duel with the invisible forces of bad luck. I have a lot of choices of kit, and since my Nats are superstitious too, I’ll do my part. I’ll be the one in the purple shoes. 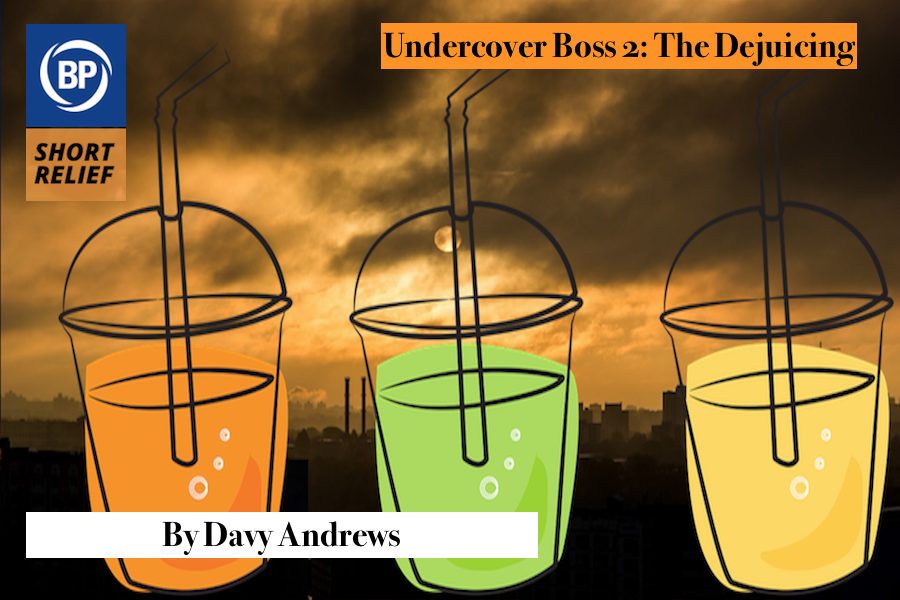 The events from January 2019 could be found here.

September, 2019. Turrialba, Costa Rica. A factory. EMPLOYEE 2 works next to a large bin of finished baseballs. ROB MANFRED jumps unexpectedly out of the bin and baseballs fly everywhere.

MANFRED: We need to dejuice these balls!
EMPLOYEE 2: OH MY GOD! Have you been there all day? I was really hoping I’d never see you again, Rob.
MANFRED: You know my name?
EMPLOYEE 2: Rob Manfred, Commissioner of Major League Baseball. I googled you! Are you aware that people don’t like you?
MANFRED: I missed you too.
EMPLOYEE 2: I juiced the baseballs just like you said.
MANFRED: And you did a great job.
EMPLOYEE 2: Thank you.
MANFRED: In fact, you did such a great job that it ruined my life.
EMPLOYEE 2: I am glad that I could be of service.
MANFRED: The game is totally distorted; pop-ups are going for home runs.
EMPLOYEE 2: That means nothing to me. You know I don’t follow baseball, Rob. I’m a bocce guy.
MANFRED: Bocce? You make baseballs for a living, but the only sport you like is bocce?
EMPLOYEE 2: Sport of kings, my friend.
MANFRED: Incorrect. So now we need to dejuice the baseballs.
EMPLOYEE 2: Wait, what?
MANFRED: Dejuice them. Unjuice them.
EMPLOYEE 2: You want to add juice?
MANFRED: No. I want the opposite of that.
EMPLOYEE 2: Say you’re juicing an orange; that’s removing the juice. Dejuicing sounds like adding juice.
MANFRED: I want you to remove the juice.
EMPLOYEE 2: Isn’t that fun? How juice and unjuice mean the same thing, like flammable and inflammable? You know what’s juicy? Language.
MANFRED: We want to de-unjuice them. We want dead baseballs.
EMPLOYEE 2: That’s easy enough. But why?
MANFRED: Remember when I asked you to juice the balls? Remember how I traveled by stealth? Remember how nary a soul knew my true identity?
EMPLOYEE 2: I remember a fake moustache.
MANFRED: Well the secret plan worked perfectly, except that the secret was glaringly obvious and everyone noticed it instantly. You did your job too well.
EMPLOYEE 2: Again, I accept your congratulations. More importantly, what happened to that monster, Justin Verlander? Did he suffer? Did the juiced baseballs cause him pain? Unbearable, unfathomable pain?
MANFRED: Well, actually.
EMPLOYEE 2: Yes?
MANFRED: He adjusted pretty nicely.
EMPLOYEE 2: He WHAT?
MANFRED: He was, by some measures, the best pitcher in the league. He’s up for an award.
EMPLOYEE 2: You told me that he hated juicy baseballs. You told me that if I juiced the baseballs it would ruin his life.
MANFRED: I mean, he was probably annoyed.
EMPLOYEE 2: Annoyed?
MANFRED: Moderately peeved. You peeved Justin Verlander. What more could you want?
EMPLOYEE 2: I could want to destroy him. I could want to bathe in his blood. I could salsa dance to the anguished lamentations of his wife.
MANFRED: Kate Upton?
EMPLOYEE 2: What?
MANFRED: His wife. She’s Kate Upton, the model.
EMPLOYEE 2: Oh, I loved her in that movie, the one about the heist in the tower.
MANFRED: Tower Heist?
EMPLOYEE 2: I don’t remember the name.
MANFRED: We need to undo what you did. People are asking questions. I had to commission a whole scientific study.
EMPLOYEE 2: That sounds fun. Did you use empirical evidence to provide clarity and objective answers?
MANFRED: Of course not. We muddied the waters. Threw some physics terms out there. Confused. Obfuscated.
EMPLOYEE 2: Very scientific.
MANFRED: So we’re going to unjuice—shut up—deaden them. Everything goes back to normal. And people stop hating me for the juicy baseballs.
EMPLOYEE 2: They just go back to hating you for other reasons.
MANFRED: Exactly.
EMPLOYEE 2: You said everyone noticed the juiced baseballs. If we deaden them, won’t they notice that too? Wouldn’t it be smarter to wait until next year? Don’t the important games happen at the end of the year? That’s how my bocce league works. Seems like a bad time to drastically change the mechanics of the game. If they did that during the bocce playoffs, people would lose it.
MANFRED: Please stop talking about bocce.
EMPLOYEE 2: Bocce.
MANFRED: No one will notice. 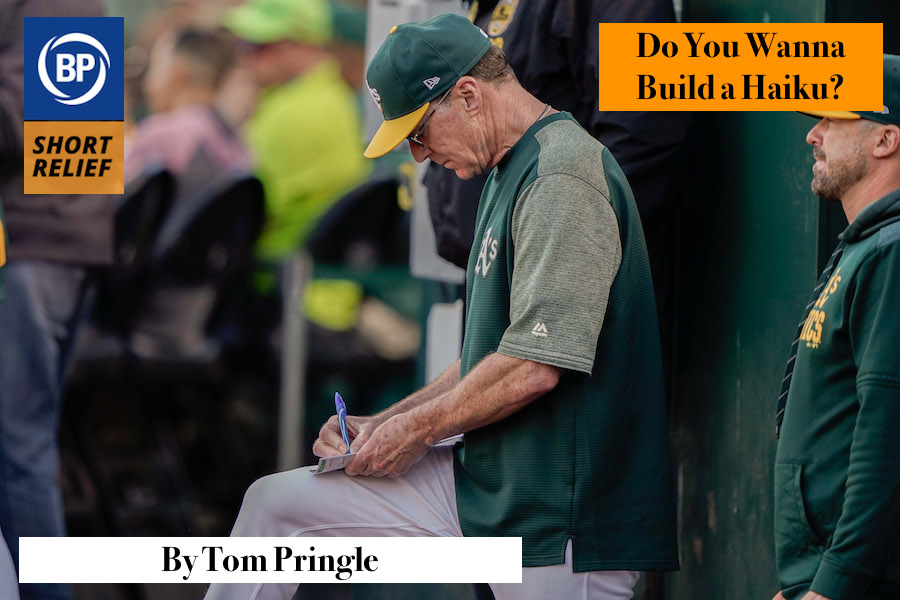 The YoungWriters website tells us a haiku poem (which can also be known as a hokku), is a type of poetry that consists of three lines and 17 syllables, with a structure of:

It also states the poem can be written on many themes, from love to nature. I love baseball and it feels natural to love it. With absolutely zero experience in writing haikus, I think it’s time to try and construct my baseball haiku.

First, we need to find out which words will work well and not clog up the haiku by stealing too many syllables. For example, “Guaranteed Rate Field” completely wipes out one line of your haiku. Which might not be a bad thing if you’re writing something like:

The equipment required for baseball, really help us in these early stages: bat, ball, gloves, glove, base and field. Most of the teams help us too, we can pop them into a handy syllable bucket reference guide. 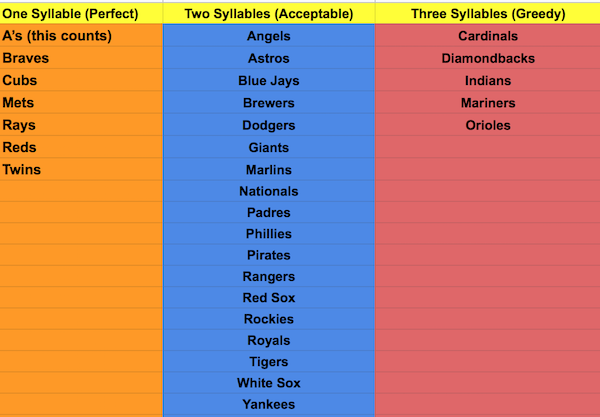 What about players? Again, there are the standouts that just vacuum up an entire line of a haiku: Daniel Ponce de Leon is one of those players. Fernando Tatís Junior is another that will take out that second line. One could argue the pronunciation of “Junior” may throw him out entirely adding that eighth syllable.

However, Brock Holt is perfect. Just two syllables used, short, simple, concise, perfect for the situation. Some may argue it’s just like his baseball playing ability.

Finally, what about some baseball lingo or analytical terminology?

So now we have an idea of how to contrast a haiku, what words will help us and hinder us, I suppose you’re expecting some profound example from me right now.

I’ll refer you back to the start of this post — I have zero experience in the subject of writing Haikus. However, when has that ever stopped me from doing anything?

The Padres were bad.
Fernando Tatis Junior,
The Padres are good.

You need to be logged in to comment. Login or Subscribe
Matthew Gold
Baseball Prospectus attempts/Baseball Poetry/Further study is required
Reply to Matthew
Tom Pringle
To be fair, twas I that attempted the poetry.

BP reserve the right (and probably should) to distance themselves from me.
Reply to Tom